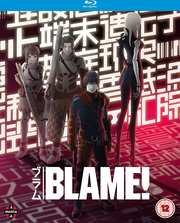 There’s the Netflix logo again, and there’s the Polygon Pictures ident as well. We’re in the same territory as Ajin: Demi Human and Knights of Sidonia, both Manga Entertainment pick-ups in recent years. The idea of 3D CG anime may elicit a knee-jerk response, especially given a handful of blind alleys and dead ends pursued by producers in the past, but it seems as if Polygon Pictures have finally cracked it, creating character art and animation that live up to the engaging, sci-fi storylines that they are adapting. Certainly I have been more than satisfied with both Ajin and Knights of Sidonia. In fact, this new release, the Blame! feature film shares a creator with Knights of Sidonia, and was spun off an engaging segment of a season 2 Knights of Sidonia episode. (Barely articulate scream to whoever might be listening, when is Season 2 of Sidonia going to be released in the UK?!)

In the distant past, humans coexisted with the machines, living their lives and letting the machines do the hard work of building their cities, and facilitating those lives. Then came the Contagion, and humans lost control. The machines kept on endlessly building the cities, but now hunted down humans as infestations. Just a handful of people survive living in isolated and overlooked villages in the mega-city superstructure.

One village is on the verge of destruction, its people starving to the degree that a group of children have been forced to go foraging for the sludge they call. When they are attacked by Exterminators, only a girl named Zuru and two others survive, and even then it’s thanks to the arrival of a stranger named Killy. Killy has some serious skills and weaponry, and he’s searching for the Net Terminal Gene, which he believes will bring The Machine back under human control. But there may be another hope hidden in the forbidden catacombs under Zuru’s village.

Blame! gets a 2.35:1 widescreen 1080p transfer on this disc which other than a hint of banding and a slight excessive brightness is of good HD quality. Detail levels are excellent, and the animation is smooth and fluid. Polygon Pictures build on their previous work, delivering a world design that is epic and awe-inspiring, while the characters in motion, the action sequences stand up against any summer blockbuster. That said, the character designs are a bit samey, except for the hero characters.

You have the choice between DTS-HD MA 5.1 Surround and PCM 2.0 Stereo, both in English and Japanese. There is what is listed as an HOH English subtitle track and a signs only track. I didn’t notice any sound effects in the subtitles and it differed slightly from the English dialogue (probably taken from an earlier dub script), which renders the HOH description a little misleading, and the dub certainly doesn’t seen too far removed from the Japanese dialogue, so the subtitles work just fine as a translation of the Japanese. It’s a shame that we don’t get the Dolby Atmos track, as Blame! was touted as one of the first anime to use that format, but the surround tracks on this disc are really robust, effectively presenting the action sequences and immersing the viewer in this future world, as well as allowing the music to drive the story. The subtitles are timed accurately and are free of typos.

The disc presents the film with an animated menu.

The sole extra is a rather useful Making Of featurette which sees the creators of the film interviewed. This lasts 30:48 and is presented in 1080i.

Blame! is a lot of fun to watch. It’s a well-paced, action packed sci-fi movie with some strong ideas and a wonderful sense of world-building. It’s a post-apocalyptic dystopia where the machines won, and humanity has devolved into a tribal existence, albeit tribes living in a high tech world. Zuru’s an Electro-fisher who goes foraging for food in an armoured suit and a helmet with a heads-up display and a communicator. They do this to avoid the gaze of the machines, and the Exterminators they have to avoid certainly are creepy, humanoid in appearance, but scuttling on all fours like metal arachnids.

During an attack by Exterminators, Zuru and two friends are rescued by an enigmatic stranger named Killy, a man of few words, but who brings hope to a village that is staring doom in the face. He’s looking for a means to restore human control of the Machine, something that was lost with the Contagion that doomed society, and a macabre clue to that control lies under the village. There’s plenty of action to be had in Blame! as the characters fight to change their world for the better.

But Blame! isn’t without its flaws. At just two hours in length, it doesn’t really have the time to develop its world, and especially its characters in the way that longer series like Ajin and Sidonia had. There’s certainly very little satisfaction to be had in the character arcs in the film, and it is even harder to invest in the characters. But by far the biggest problem is that of the film’s derivative nature, a whole lot of Terminator crossed with The Matrix, a bit of Tron imagery, and a Western tone to the story. Killy is a cross between Judgement Day’s good Terminator and the Man with No Name. You can’t help but feel that you’ve seen this story done before, and done better.

The Blu-ray from Manga Entertainment is of great quality, bringing the film to life with its strong presentation, and despite its hackneyed nature, Blame! is at least entertaining and satisfying.