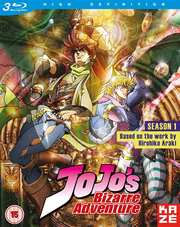 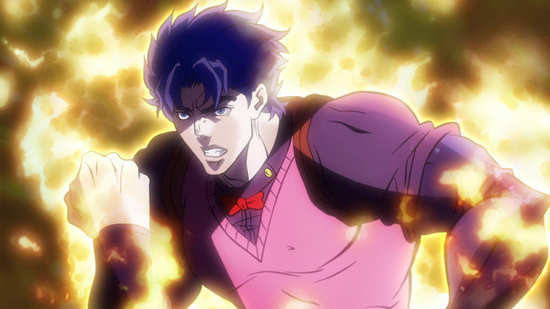 Every now and then, My Reviewer’s in-house professor of all things anime, Jitendar Canth, mails me to either recommend a really great anime or for some emergency assistance to help lessen the considerable load of reviewing he selflessly undertakes on our collective behalf. So the below email came as no surprise.

“Hi Stuart. Hope you are well. I also hope that you have the time to review the most manliest anime ever animated, so manly it makes Fist of the North Star look like Little Women. It's so manly that the live action version has Chuck Norris playing all the roles, including the girls. It's Jojo's Bizarre Adventure of course, originally released here on a dismal DVD by Warners, but now getting a Blu-ray re-release from Kaze. Plenty of in-jokes with the character names, and a theme song from Yes. Please say yes.   Kind Regards, Jitendar”.

Well, with an offer like that, who was I to turn it down? 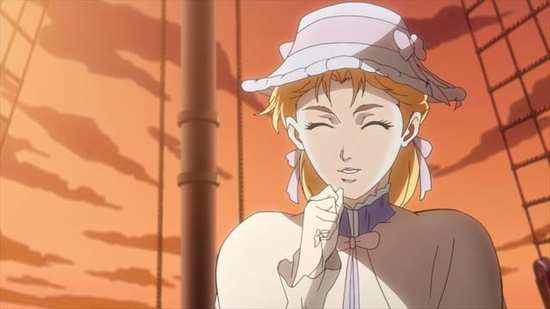 Although I’d heard of ‘Jojo’s Bizarre Adventures’, I had no idea what it was about. I wasn’t even aware that Jojo was a man. But a quick bit of research before the discs arrived told me that it’s quite a phenomenon. The manga has sold over 100 million copies to date and is still going strong. Its mix of expressive artwork, lots of fighting and an emotive, melodramatic, love-fuelled story-line, full of injustices, made it a popular read across all age groups, gender and social classes. 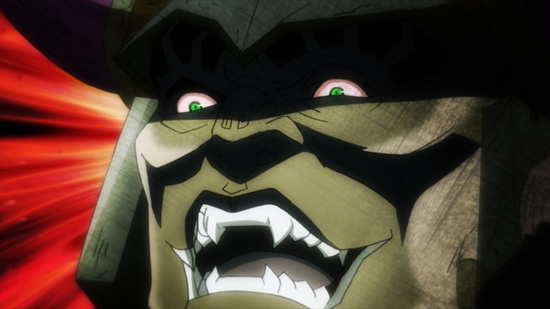 The anime had quite a reputation to live up to and, after a couple of misguided adaptations, (a 1993, version of Part 3 of the manga and a 2007 movie which was universally panned) didn’t get an anime worthy of its reputation until 2012. 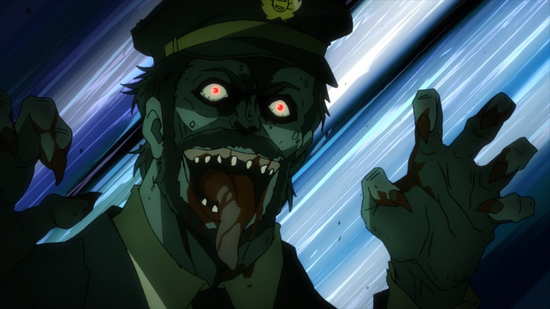 As Jitendar rightly warned, the series kicks off as it means to go on, pulling no punches in its portrayal of the intertwining lives of two young men – one good and righteous, and the other a bitter, scheming evil-doer for the most part; yin and yang and two sides of a single coin perhaps.

In the late 1800s, when Jonathan Joestar’s father is attacked and, left for dead, he mistakenly assumes that a chance thief, rifling through his pockets, is trying to save him. As a wealthy man, he rewards the scoundrel and, when the thief passes away, he ‘adopts’ his son, Dio Brando, inviting him to live in the family home, and become the equal of his son, Jonathan. But things do not go well. Dio is determined to inherit the Father’s wealth and sets out to destroy Jonathan. 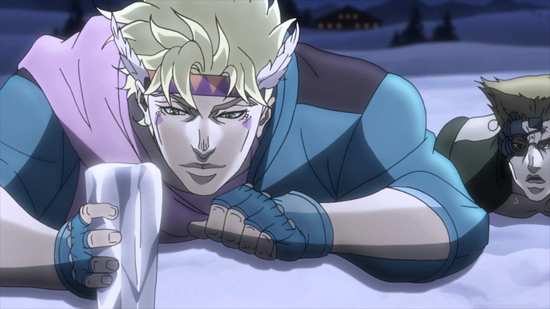 This destruction includes souring a relationship he has developed with a local girl, as well as destroying trust and friendship with all the local teens, making Jojo’s life as miserable as possible. When the two fight, which is often, Dio seems to have the upper hand until one day when he pushes Jojo too far and, awakened by a new fury, Jojo beats him in a fight. Dio decides to play the long game and pretends to be Jojo’s friend whilst secretly poisoning the father (just as he did his own) and plotting Jojo’s demise. 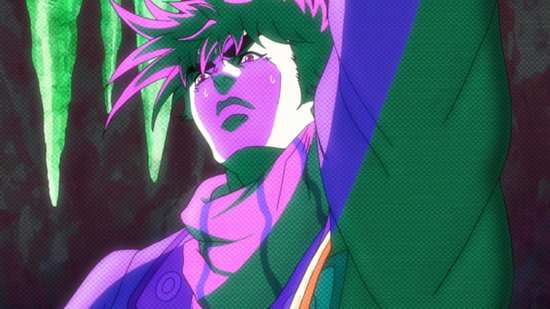 So far so simple. Only I haven’t mentioned the mask. A strange stone mask was left at the scene of his Father’s attack which, when placed on the face of a wearer, appears to take over their will, turning them into a slavering and murderous zombie. But recognising it has deeper powers, Dio decides to don it, turning himself into a vampire, set to bring about Jojo’s death and his own victory.

Thus starts a battle between Jonathan Joestar and the vampiric Dio Brande. JoJo has to now master the art of “Hamon,” a unique martial art that deploys energy on an almost spiritual level in order to fight his supernatural foe, allowing JoJo to channel energy through everyday objects, turning them into weapons. 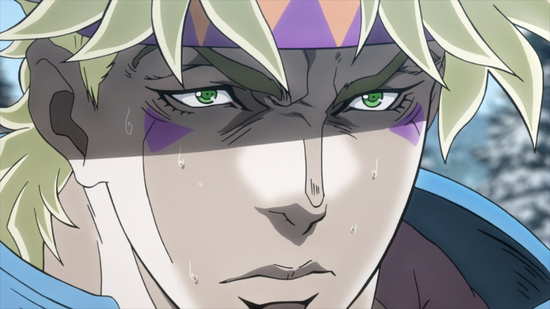 Please note, as suggested by Jitendar’s introduction to the series, this is not for the squeamish. This may be animated but it ain’t ‘Frozen’. Blood flows profusely and the bone-crunching audio effects add to the mayhem. It’s testosterone fuelled, high energy ultra-violence – but with a human twist.
And things don’t let up in the second story arc, ‘Battle Tendency, from Episode 10 onwards, which moves things on 50 years to 1938 where the JoJo mantle is taken up by Jonathan’s grandson, Joseph. 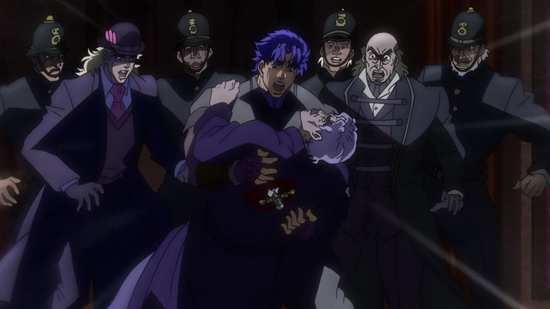 The action relocates to New York and Joseph is portrayed as a confident, strutting peacock of a man, a complete Hamon natural, who considers his battles with the ‘Pillar Men’, supernatural beings, as par for the course, despite the fact that their aim is nothing short of global annihilation. They are working towards the birth of a super-being who will be able to achieve that aim with ease. Cue lots of macho ‘Hamon’ fighting action – pretty serious stuff for the most part, but extremely diverting nonetheless, especially ambitious scenes like the chariot race which will have you gripping both sides of your armchair. 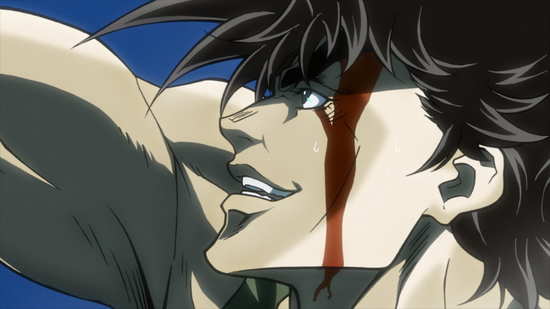 One thing’s for sure; the 26 episodes blur one to the other with great ease and although I found it a tough series to binge watch more than maybe two episodes at a time (they do get a little repetitive), a daily dose was very welcome. The fact that I enjoyed this first series as much as I did surprised me, just as my liking for the original ‘Fist of the North Star’ did. Not my thing on paper, and yet a lot of fun regardless.

One bonus (at least for a creaking old-timer like me) was the use of a classic Prog Rock track at the end of each episode, ‘Roundabout’ by Yes from 1972. An unlikely contender perhaps but it works amazingly well somehow. I’d forgotten how good that looping, trebly bass line was. Excellent stuff.

I elected to watch the series using the English audio dub, having started with Japanese, and finding it a challenge to keep up. I thought the dub was excellent and a reasonably faithful reflection of the Japanese voices in the original. 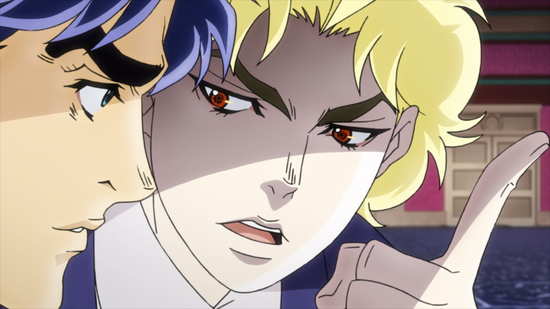 One criticism, though it may have been my Blu-Ray player, the check discs or a combination of both, was the clunky menu. Every command seemed to take a few seconds to respond, which, by the time it did, had been countermanded by my own impatience. Eventually I had to accept a 4 second delay between a remote-control press and anything happening on the screen. But as I say, although this doesn’t happen on any other discs for me, maybe a quirk that is not reflected in the user experience with the retail discs.

JoJo’s Bizarre Adventures is a fun series, full of the kind of serialised melodrama that made silent movies with girl’s being tied to railway tracks so popular in the past, where it’s crystal clear who the goodies and baddies are – and boy, are the baddies bad in this series! The fighting action, whilst a little repetitive, absolutely sets the bar for such things with some very imaginative and ambitious pieces of animation. 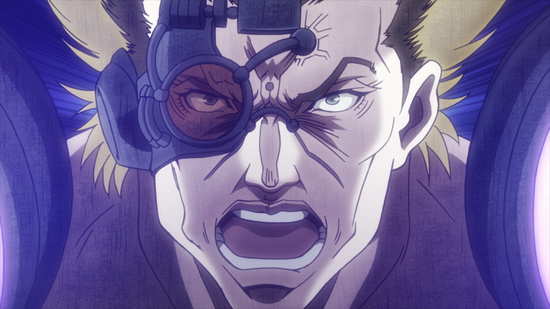 It may be worth checking the series out before committing to the Blu-Ray set of Series 1 (I believe you can view it via Crunchyroll if you have a subscription). You’ll either be grabbed by the first few episodes or not. Although the second arc (from episode 10) is a richer, more depthy experience, both parts are a lot of fun. It may be full of testosterone fuelled machismo, but it also has enough self-deprecating humour and humanity to make it something more than that.

Oh – and it looks great too.