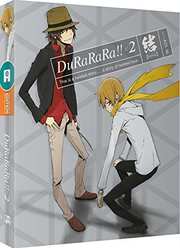 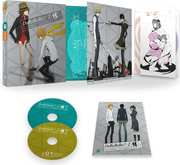 “Where has the love gone?” sang Kylie Minogue. Where indeed? I loved, loved Durarara!! when I watched the first season on Crunchyroll, so much that I watched it twice in a row. I then got the Australian DVD release for more than the price of the Blu-ray, and that’s without shipping and customs, and wound up reviewing the show twice more when it did eventually come out on Blu-ray, as the first release had to be ‘corrected’. You don’t show that kind of dedication to a show unless you have some serious passion for it. And then Durarara!! x 2 happened, and... meh! Admittedly my viewing schedule didn’t do the narrative justice, taking several years to watch it on Crunchyroll, but All the Anime’s Blu-ray release wasn’t much better, leaving eighteen months between Parts 1 and 2. It’s ‘only’ been 4 months since the release of Durarara!! x2 Ten on Blu-ray, and I’m casting my beady gaze on the conclusion, Ketsu. This is the last chance for me to fall back in love with Durarara!! 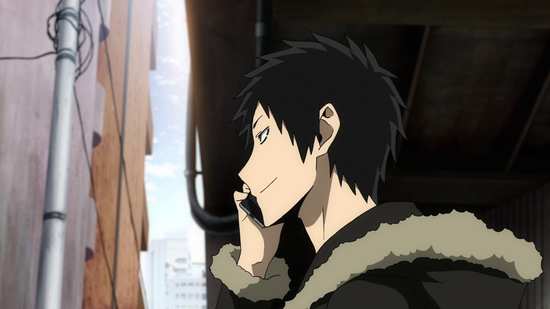 “How do you even begin to describe a show like Durarara!!? Various lives collide in Tokyo’s Ikebukuro, and all kinds of bizarre stuff happens. That isn’t exactly the most clear of series descriptions, but Durarara!! isn't a show which predicates clarity. It’s a complex interweaving of narrative, various characters’ lives are explored, often presenting visions of events from different perspectives with different meanings. The stories mix, intermingle, switch back on themselves, and jump all over the place. And in Durarara!! this is a good thing.” 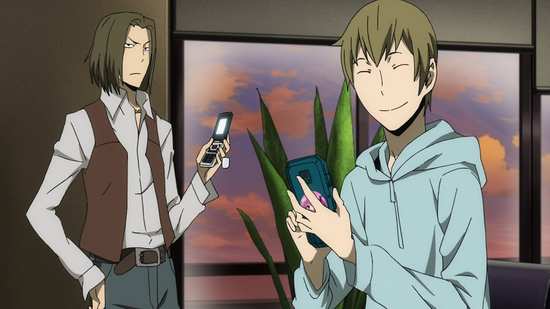 That’s how I described the first season of Durarara!!, and it’s just as applicable to Durarara!! x2, as it catches up with events six months after the end of the first season. Ikebukuro seems to have quieted down, following the mayhem that erupted around Saika/Dollars/Yellow Scarves six months previously. Mikado Ryugamine and Anri Sonohara are back at school, while Masaomi Kida is on an extended sabbatical. Shizuo Heiwajima still wants to pummel Izaya Orihara, and Izaya still revels in needling Shizuo. And the headless rider Celty Sturluson has become something of a celebrity around town, with even a reward posted for her true identity. But things are about to get hectic again. A new school year has started, and Izaya’s twin sisters Mairu and Kururi are starting high school, and they seem to share their big brother’s playful insanity, if not his Machiavellian traits. A new kid called Aoba Kuronuma desperately wants to be Mikado’s best friend, and he wants in to the Dollars as well. A little girl called Akane Awakusu wants to kill Shizuo Heiwajima, and she’s in the middle of a gang war too. There’s a serial killer named Hollywood in town who falls into movie star Yuhei Hanejima’s (Shizuo Heiwajima’s younger brother) lap. There are a couple of Russian assassins mixing things up too. Ikebukuro is going to get crazy again! 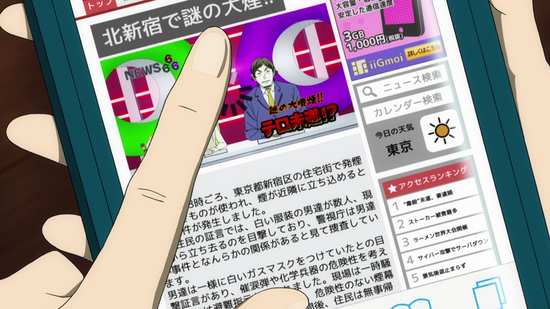 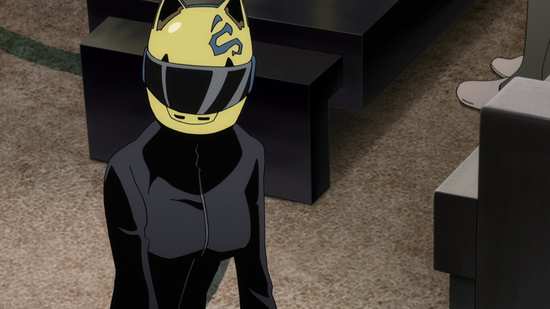 Durarara!! x2 Part 1 gets a fine transfer from All the Anime. It’s not the Aniplex release (fewer discs, no OVA), but the image quality is excellent, the 1.78:1 widescreen 1080p transfer coming across without incident. There’s no compression, no banding, at least to my eye, just a faithful presentation of the original source material. The problem is with the source material. For the second season of Durarara!!, anime production switched from Studio Brains Base to Studio Shuka and it does tell in the overall quality of the animation. The character designs are nigh on identical to the first season as you would expect, but the richness in the backgrounds is comparatively lacking. On top of that, the animation standards are quite variable, with some excellent action sequences to be sure, but also sequences where the quality just drops off a cliff. 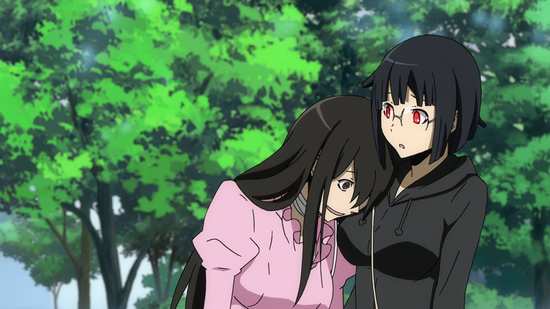 Siren Visual have authored these discs, and they’ve messed up yet again. The first arc had PCM 2.0 Stereo audio, but for the second part, they went and stuck the DVD audio on there. They’ve done exactly the same thing again for Part 3. Just Dolby Digital 2.0 Stereo English and Japanese encoded at approximately 200kbps (My Blu-ray player isn’t as precise as my DVD player). Actually it’s less than the DVD experience, as the Durarara X2 Ketsu DVDs also authored by Siren, have their stereo tracks encoded at 384kbps. 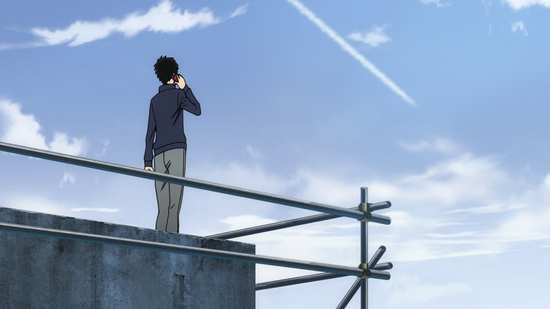 This time I stuck with the Japanese throughout, although my experience with the first series, and given that there is a continuity of voice cast here, suggests that the English will be a strong offering again. The dialogue was clear throughout, the show’s action represented well, and despite shifting studios, the show’s quirky music soundtrack returns. You get optional subtitles and signs with the episodes, and they are timed accurately and free of typos.

The discs present their content with static silent menus. Disc 2 has the textless credits, and that’s your lot. 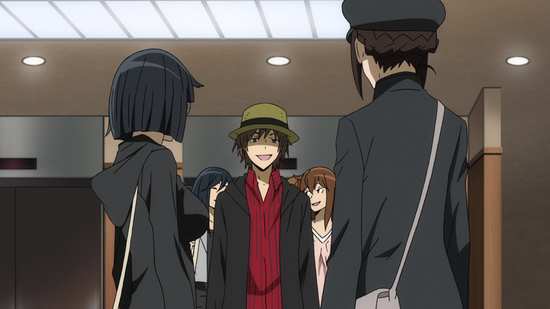 Ghost in the Shell: Stand Alone Complex... 2nd Gig. Ah My Goddess TV... Flights of Fancy. Blue Exorcist... Kyoto Saga. Darker Than Black... Gemini of the Meteor. Hidamari Sketch Hoshimittsu... Honeycomb. All of these are anime which had a great season, and in some cases after a significant gap, followed it up with something as good, if not even better. Right now I am furiously reminding myself that this is possible, even likely, because for me, Durarara!! x2 goes in the same pile as Oreimo S2, The Melancholy of Haruhi Suzumiya Season 2, and Last Exile: Fam the Silver Wing, as sequels I just wish hadn’t been green-lighted, and it leaves me in a state of dread for the forthcoming FLCL sequel. Okay, maybe not Oreimo S2, as that occupies a nadir in hell all its own. It’s not just that the sequels are bad, it’s also that they tarnish the memory of the original. 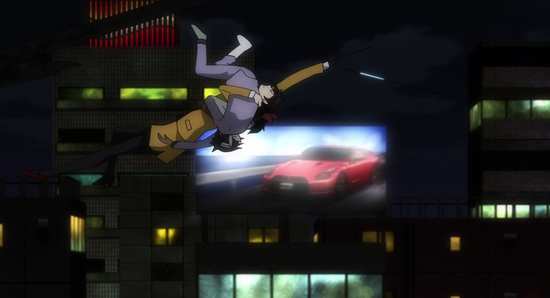 I loved the original Durarara!!, but couldn’t really get to grips with the sequel when it was streamed, no doubt down to my haphazard viewing schedule. You’d think watching it on Blu-ray in big enough chunks would help, but the delay between Parts 1 & 2 was almost as bad as my Crunchyroll viewing, and even though the gap between Parts 2 & 3 has come down to a more reasonable handful of months, that momentum of amnesia has followed through, meaning when I started watching Ketsu on Blu-ray, barely the minimum of Ten remained in my mind. I’ve already talked in previous reviews about how the second season of Durarara!! has let me down so far. The storytelling style has become leaden and weighted down with exposition. And the show suffers from character overload. 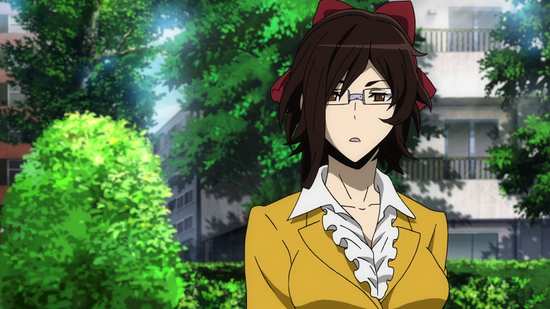 This final collection of episodes from Durarara!! x2 manages to pull most of its plot threads together to head towards a somewhat satisfying conclusion, although I would have been a lot more satisfied if I knew just who most of the important characters were. Certainly, the big villain behind this series’ Saika plotline, turns out to be a relative no-name who barely made an impact in the first series, and I didn’t even recognise him without his false beard. But there is definitely momentum and energy to this show’s final arc which wasn’t present for the first two. And there are aspects of the conclusion that I do like; certainly the Celty arc which has a satisfying denouement here, and if you’ve been waiting patiently for Shizuo Heiwajima to give Izaya Orihara the piece of his mind that has street furniture attached, then there is much satisfaction to be had. 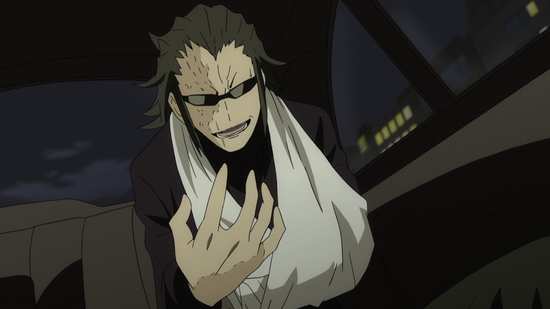 What I really dislike about Durarara!! x2 is what it does to Anri, Masaomi, and Mikado, the three characters that drove the first series. Without going into spoilers, for me it felt like a character assassination that rivalled that of Haruhi and Kyon in The Sigh of Haruhi Suzumiya (S2 episodes). These aren’t the characters I fell in love with, and while it no doubt makes sense in terms of the story and the character arcs from the point of view of the writer, I just can’t see Mikado Ryugamine driven into the corner that he finds himself in at the end of Ketsu. 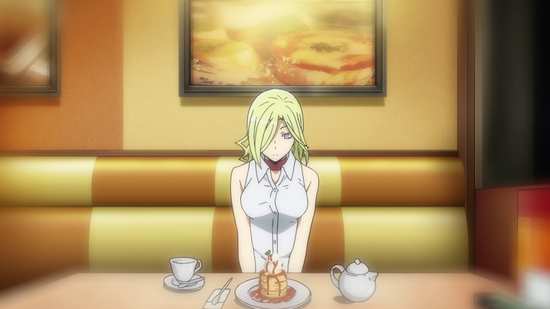 The whole of Durarara!! x2 has been boring, dull, tiresome, and tedious, yet with enough sparks of the original, enough in the way of reminders of that brilliant first season, to keep me tuning in, despite the narration now sounding pretentious, the online chat-room utterly gimmicky. If you love Durarara!! x2 as much as the original, well, you already will have opted for Aniplex US’ release, which has the OVAs that the UK/AU release missed out on. But if that wasn’t enough, the final two-thirds of the show defaulting to lossy audio makes these Blu-rays even less attractive an idea. It could just be the way I watched it. Next time I’ll give it the proper, binge treatment, back to back with the first series, all episodes in close enough order so I don’t forget any of the plot arcs. But I doubt that can save what it does to the central trio. Durarara!! x2 is a sequel that only gets by, hanging onto the coattails of the original.