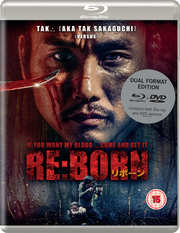 Blu-ray
Kabaneri of the Iron Fortress

Three things attracted me to reviewing Re:Born. First was the plot, which is so like one of my favourite eighties action movies that I did a double take when I read the PR blurb. The second thing was the presence of Tak Sakaguchi, now known simply as Tak ⸫, a genuine action genius who I have enjoyed watching in films like Deadball and Yakuza Weapon. The third and most compelling reason was the presence of Akio Otsuka in the cast. I have been watching shows and movies with Akio Otsuka for over 20 years now, but always as a voice actor in an anime. The chance to see him in a live action movie was one I couldn’t pass up.

Toshiro works in a convenience store to raise his niece Sachi. It’s a nice life, even if Sachi’s pragmatism can be a little shocking. Toshiro doesn’t exactly shield her from the realities of the world, a little hard to do when he suffers from PTSD. For in another life, Toshiro was the ultimate mercenary, the legendary Reborn Ghost of the battlefield. When he left his squad with Sachi, he wound up betraying his leader Phantom, and Phantom wants payback. He’s sent all manner of kill squads after Toshiro, but they didn’t call him the Reborn Ghost for nothing. If Phantom wants Toshiro dead, he’ll have to be creative. So he kidnaps Sachi. But that’s exactly what Toshiro has been waiting for.

Re:Born gets a 2.35:1 widescreen 1080p transfer on this Blu-ray disc. The image is clear and sharp, with no visible artefacts or banding. The one issue is with detail in darker scenes, with blacks feeling particularly washed out, especially in indoor settings. When the image is bright and exterior, detail levels are good, and you can better appreciate the action choreography and stunt work. Incidentally this is one of those films that ought to come with a flashing images/epilepsy warning.

You have the choice between DTS-HD MA 5.1 Surround and PCM 2.0 Stereo Japanese with optional English subtitles. The dialogue is clear, and the surrounds are put to good use conveying the action. The music soundtrack drives the action well, and I wasn’t surprised to see Kenji Kawai’s name in the credits as composer.

The disc boots quickly to a static menu, from where you can get a brief, 38 second introduction to the film, as well as the Eureka Trailer and the Original Theatrical Trailer.

You’re not the only one if you read this film’s synopsis and thought Commando. I love Commando, and I was eager to see another stab at that premise. There are a couple of differences though. The villains merely want Toshiro dead, and are willing to do whatever it takes to accomplish that, and Toshiro’s not too keen on the firearms, he likes to do his killing up close and personal. If you like your close-combat action sequences, then Re:Born is the action movie for you. I bet you didn’t think two people could fight to the death in a phone booth! But Re:Born has a problem. There came a point in the film where I stopped comparing the film to Commando, and started wishing I was watching Commando instead.

If you watched Deadball and Yakuza Weapon, and come to Re:Born expecting more of the same, you’re going to be disappointed. Those first two films were action movie parodies, over the top, comic book violence played mostly for laughs. In Re:Born, Tak⸫ plays it straight, a strong dramatic performance as a traumatised ex-mercenary, whose only human connection is with his niece, and maybe the therapist who tries to counsel him. If there is any humour in Re:Born, it’s of the dark, gallows variety. This isn’t a movie with quips and one-liners following each villain death.

The second, more pressing issue is a lack of characterisation for the villains. Other than Phantom and his right hand man, the others are a faceless bunch of killers who aren’t around long enough to be developed as characters, before they meet their demise. In the case of the lower ranks, they literally are faceless, masked mostly to re-use extras and stuntmen in different soldier roles.

It’s mostly close quarters, hand to hand combat, well choreographed, and brilliantly captured on camera, and thrilling to watch... at first. Most of the fight sequences in the first half of the film are set in urban areas, city streets and thoroughfares, conveniences stores, lifts and phone booths. That is visually engaging, and it allows for a lot of variety in the fight choreography when it comes to props and sets. But the final assault is on a ruined building in the middle of a forest, where Toshiro has to face 200 enemies, almost single-handed. At this point the action all seems to blur together, the same routine feels repeated over and over again, and I have to admit that my attention began to wander.

You can’t fault the action sequences in Re:Born; it’s just in terms of characterisation and story that it never really catches fire. It’s worth checking out if you have a couple of hours to spare though, and you don’t have a copy of Commando.