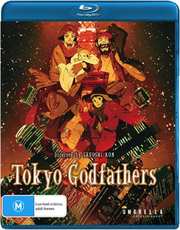 When you look at today’s anime market, it seems that everything comes out on Blu-ray. Anime took a little longer than cinema, and the rest of TV, but it embraced the HD age in the mid-2000s and hasn’t really looked back. It took a little bit longer even than that for the UK anime industry to catch up to everyone else, but now DVD only titles are the exception rather than the rule, and when it comes to classic anime cinema, all those titles of yesteryear are up for HD re-evaluation. It all begs the question as to why anime auteur Satoshi Kon is so hard done by when it comes to getting his titles on Blu-ray, especially when there are tragically so few of them, given his early death. 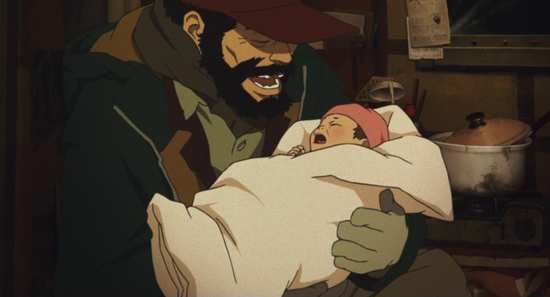 You have the Magnetic Rose segment of Memories, you have Perfect Blue, Millennium Actress, Tokyo Godfathers, Paranoia Agent and Paprika, and of them, only Paprika had a worldwide Blu-ray release courtesy of Sony, and recently Manga have given it a spruced up re-release in the UK with improved image quality. When it comes to English speaking territories, Perfect Blue has a UK and Australian release thanks to All the Anime, Siren Visual gave Memories a release in Australia, Millennium Actress has no release at all, and it was only last year that Tokyo Godfathers got a release in Australia thanks to Umbrella Entertainment. These are titles that anime fans and cinephiles alike would pounce on, yet they remain infuriatingly elusive on Blu-ray. But I did manage to finally get my favourite Christmas movie, although I’m a couple of months late in watching it. 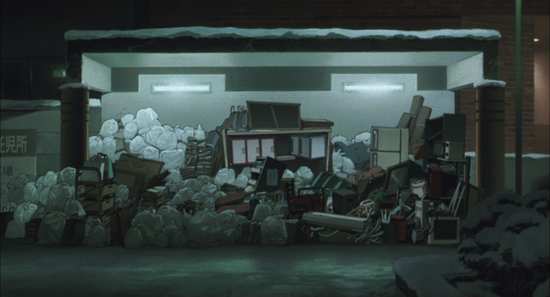 Christmas is much like any other time when you’re homeless, and it’s no different for Gin, a down on his luck gambler, Miyuki, a runaway teenager and transvestite Hana. But things begin to change for them when they find a baby abandoned at a rubbish tip. They take pity on the poor child, and decide to return her to the mother. Their journey takes them on an adventure through the city, and while they try to accomplish this Christmas miracle, the baby may be the miracle that brings light to their own bedraggled lives. 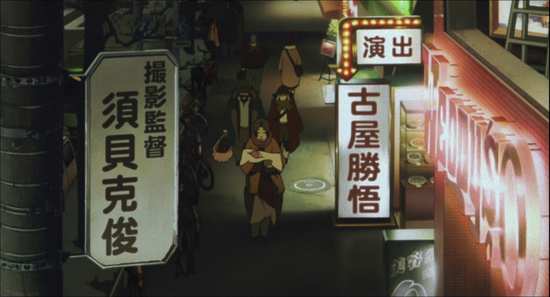 And this is where the first disappointment strikes. I have the film on DVD, and as was the practice at the time, anime films were presented as slightly windowboxed to correct for overscan on those early CRT HD TVs. On Umbrella’s Blu-ray of Tokyo Godfathers, someone has taken the windowboxed image and windowboxed it again! The black borders are now twice as thick. On a 37” panel, you get 2” borders. If you turn overscan on, you have 1” borders to live with. It’s disappointing to say the least. As for the image, it’s clearly taken from the same, somewhat worn print as that DVD release, the image is faded, contrast isn’t too great and dark detail could be better. The image is marginally better than the DVD, there is some improvement in fine detail, and the muted colour palette is a little richer. The biggest advantage is the smooth progressive animation at the correct 24 fps frame-rate. It is better than the DVD if you zoom the picture in a bit, but not enough to pounce on the import button. 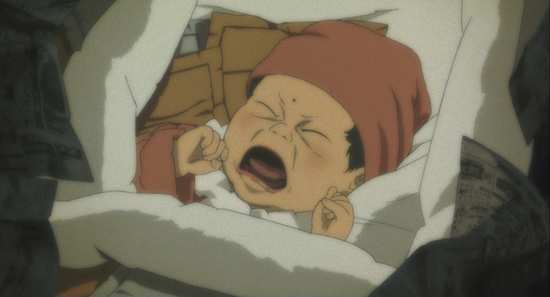 Again we have another disappointment as Umbrella have the audio on this disc as merely a Dolby Digital 5.1 Japanese track at 640kbps. Given that the DVD has a full bitrate DTS track, this is quite the drop in audio fidelity. Once you get used to that though, the audio is acceptable enough, the dialogue is clear, the surround put to good use bringing across the music and the action. The English subtitle track is the same as before, still with one or two typos, and on this Blu-ray with the font a little small, and the timing not always on point. Once again, it’s not a reason to import. 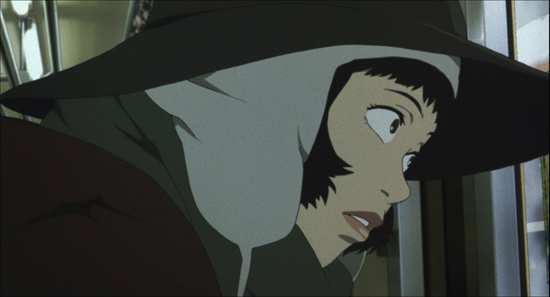 This is the reason to import; extra features. In the UK, the DVD was a barebones release, complemented by a collector’s edition, with all manner of physical extras, as well as a second DVD with some featurettes. That collector’s edition was sold out long before I could get my hands on it, so this Blu-ray is a useful alternative. No physical extras, but we do now have the featurettes on general retail. 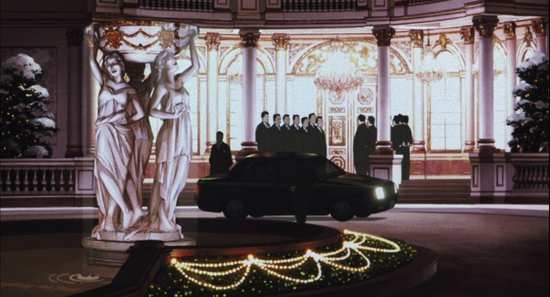 You get one disc in a Blu-ray Amaray, and a reversible sleeve lets you dispense with the Australian ratings logo on the front. The disc boots to an animated menu with Play, Scene Select, and Extras. You can turn the subtitles off in the film with your remote.

All of the featurettes have been up-scaled to some variation of 1080 resolution.

Unexpected Tours lasts 25:20 and Process of Animation: The Making of Tokyo Godfathers lasts 13:55. Both are making of featurettes, and offer interviews with the cast and crew, including Satoshi Kon. 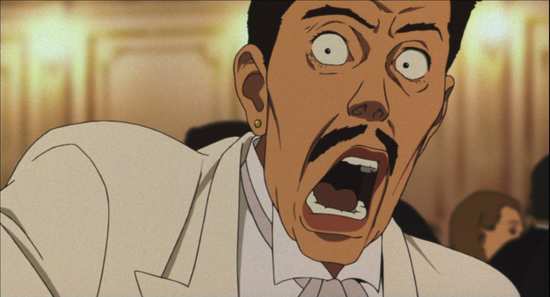 Animax Featurette (Big Apple Anime Fest 2003) looks at the film’s US premiere for 21:57, and offers one of those stage events.

5.1 Surround Sound Art Gallery & Interview with Music Director: Keiichi Suzuki lasts 11:46 and does what it says.

Finally you get three varieties of trailer for the film. 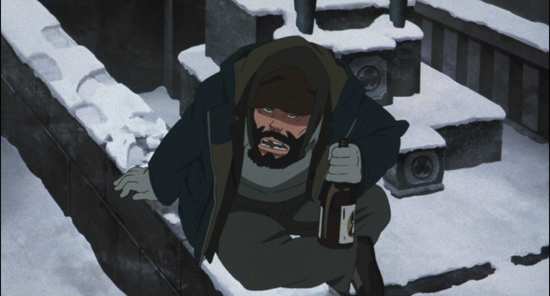 Tokyo Godfathers is by far Satoshi Kon’s most accessible work, a heart-warming and tender Christmas story that’s bound to divest the most committed of Scrooges of his bag of humbugs. Having said all that, it’s still as far from the conventional Christmas tale as you can get, without it being Easter. The story itself is a familiar one, Kon has said that he was influenced by the 1948 John Ford Western, The 3 Godfathers, which saw John Wayne and 2 other outlaws left in charge of a baby in the middle of a desert, and the motif may be familiar to fans of the computer animation Ice Age. Tokyo Godfathers is very much a character piece though, and with its unlikely heroes plucked from society’s least wanted, it’s never less than compelling. 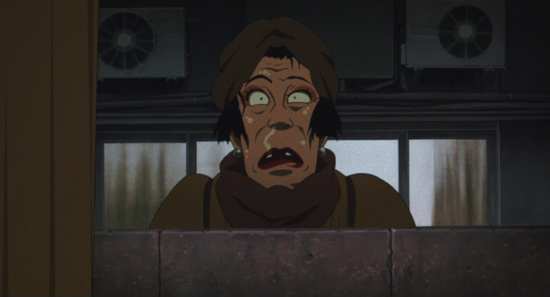 The world has forgotten about these three, and they themselves have accepted their lot, wishing to fade into insignificance. For various reasons, they are escaping their pasts, although they have managed to form a surrogate family of their own. The discovery of the baby acts as a catalyst for them to deal with their problems, and begin to reengage with society. Of course with the seasonal setting there is no surprise that they begin to attribute supernatural portents with the events that occur, they begin to talk of the baby as a messenger from God, and there is occasion for Kon’s warped perspective on things to deliver a hopeful message, helped of course by Gin’s affection for the bottle. Still, this wouldn’t be a Christmas movie without at least one genuine Christmas miracle. 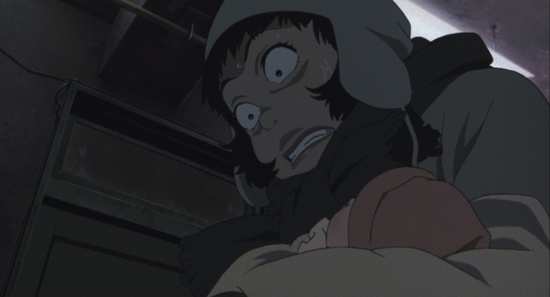 This film isn’t for younger children, the M rating is indicative of that, and while Satoshi Kon is renowned for mind-bending perspectives on subjects, he isn’t one to sugar-coat them either. There is no way of showing the plight of the homeless in a wholesome and uplifting way without descending into the saccharine. Tokyo Godfathers remains honest and forthright when it comes to its characters, and that means warts and all. But that makes the empathy that develops for them all the stronger. 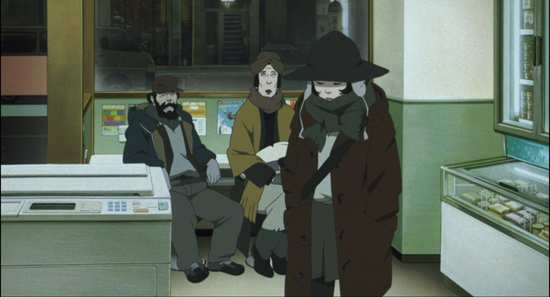 If you are tired of The Sound of Music come Christmas Day, you could do worse than watch Tokyo Godfathers instead. It hits all the right emotional notes, playing those heartstrings like a master harpist. It’s dramatic, uplifting, and funny, with just the right amount of tragedy and hope. The sublime animation is truly a joy to watch, and Satoshi Kon’s vision of the forgotten half of a city at Yule is utterly memorable. Every time I watch Tokyo Godfathers I love it more and more. It is a perfect 10 for me. The Blu-ray isn’t a perfect 10, but once again it will do until something better comes along. It does improve on the DVD, but not by enough to make it a must own, and the only way the overscan issue isn’t a problem is if you watch it in a dark enough room to hide the edges of your TV. Manga fixed the overscan for their release of Paprika. Hopefully someone has a second go at Tokyo Godfathers as well.