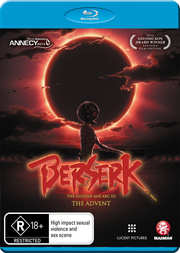 Review for Berserk: The Golden Age Arc III - The Advent

Following the first two films, I wasn’t particularly eager to see the conclusion, but the ever whining completist in me, combined with a suitably extravagant sale urged me on to get the final Berserk movie out of the way. Note that it was a Madman Christmas sale that finally triggered the opening of my wallet, as they discounted it low enough (about £3) for me to finally cave. Once again, it is cheaper for me to import an Australian release than it is to buy it locally, all the more ironic as Madman Entertainment simply imported a bunch of Kazé discs, complete with UK ratings logo, and merely repackaged them.

Guts is a young mercenary looking to make a name for himself on the battlefield, with his deft ability with his unfeasibly large sword. His skill and his relentless aggression capture the eye of Griffith, the leader of the mercenary Band of the Hawk, and Griffith just has to have Guts no matter what. It takes a one on one battle to convince Guts to join, much to the consternation of Griffith’s lieutenant Casca, who has never seen her Captain so enthused about anyone before. Three years later, The Band of the Hawk had risen in stature to be the vanguard in Midland’s war against the neighbouring nation of Chuder. And then it all fell apart when Guts decided to leave. In shock, Griffith lost his sense of perspective and wound up in prison, at the cruel mercies of a king whose daughter had been defiled, and the Band of the Hawk were declared criminals, pursued through the land. A year has passed since then, and assassins finally catch up to Casca and the few survivors, which is when Guts makes his return in typically brutal fashion. Re-enthused, the group rally and decide to rescue Griffith. But the dream of the hawk is about to die a tortured death, for Griffith’s destiny is finally at hand.

It’s the same again when it comes to the film’s image quality. The film is presented in the original aspect ratio of 2.35:1 widescreen 1080p. The transfer is as disappointing as before, although when it comes to digital banding, it is an improvement over the first two discs, no doubt because this time it is a dual layer disc. Once again, I hate the CGI in this film. For close up shots it uses traditional 2D style animation, for distance and especially battle animation, there’s no choice but to go with CGI. It’s when it goes to the mid-range, and starts doing character animation in CGI, where facial features are clearly visible, the whole thing looks woefully bad, and this time around, even more of the character animation is in CG.

The Blu-ray comes with DTS-HD MA 5.1 Surround English and Japanese, with translated English subtitles, and a signs only track. The surround is excellent, with full blooded action and grand cinematic music. The dialogue is clear throughout, and despite the cast changing, I was happy with the Japanese version, although I do find that Guts’ voice actor is a little bland and nondescript. For fans of the English dub, it’s worth noting that the original TV series voice actors for Guts, Griffith and Casca, and some lesser characters reprise their roles, so there is a bit of continuity. There’s also a little continuity in Susumu Hirasawa providing the film’s theme song, although regular Bleach and Evangelion composer Shiro Sagisu composes the film’s score. He does manage to hold onto the essence of the TV series music though, which I thought was a nice touch.

Note that as per usual for Kazé releases, the Berserk disc locks the audio and subtitle streams during playback, and there’s no way of watching the film with subs if you are a hard of hearing dub fan.

You get the Kazé disc repackaged in a BD Amaray by Madman Entertainment, which has some incomprehensible inner sleeve art. The disc boots to an animated menu after playing a trailer for Bleach: Hellverse.

This disc pretty much gathers all the extra features that should have been spread across all three films, although most of the interviews focus on the third film.

You get dub outtakes for all three movies separately. In total there is 62:57 worth on here. The dub outtakes were my least favourite thing on the series discs, you can bet I ignored these.

The Battle for Doldrey US Premiere Highlight Reel lasts 2:01.

You get production art gallery slideshows for the first two movies, five varieties of trailer (including one in Russian).

The Special Digest for Movie 2 lasts 3:42 and can be used as a reminder before watching the third film.

The Susumu Hirasawa “Aria” Live Concert offers footage of a performance of the theme song that lasts 4:51.

I’ve actually had The Advent languishing on a to-watch pile for over a year, until I found the time to watch the first two films over again as a reminder. My opinion of those films has changed little, although I did have a little more appreciation of The Battle for Doldrey with respect to its action sequences. But also in the meantime, I bought and watched the original Berserk anime series from the late nineties, given a new lease of life on HD Blu-ray, re-mastered from the original film elements. Now the animation itself is never going to be spectacular, but the HD presentation brings the story to life in a way that those murky, NTSC-PAL standards converted discs never could, and I’m no longer hesitant about re-watching the original series. What that also means is that what little meaning the retelling of the Golden Arc had, has been completely erased. When you can watch the original Berserk in HD, what’s the point of watching the inferior movies? After all, the movies are little more than a highlights package of the story, getting as quickly as they can to the juicy sex and violence and supernatural gore, while cutting out all that important stuff like narrative and character. This third film, The Advent isn’t much different. In fact it’s probably the worst of the three.

However, The Advent does stay more faithful to the manga, which means that Rickert’s arc is different, and we are introduced to the Skull Knight. We also get to see the immediate aftermath of the Eclipse, which is where the TV series stopped. We do get a little bit of what happens next, although given how this film concludes, I have little desire to actually see it again. If you’re wondering about what happens in the film, it is once more a highlights package. The Band of the Hawk are attacked, Guts to the rescue, Guts and Casca get frisky, rescue Griffith, mope about Griffith, Eclipse, aftermath, end movie. All the important character stuff is left on the floor, with only the brief pause to mope about Griffith the bit without any major action. Even still, that moment has Casca spell out in capital letters what the original series could carry through implication.

The movies work as companion pieces to the manga, and the also worked as companion pieces to the original anime series, back when the original series was only available on murky VHS quality DVD. Worse, this third film completes the character assassination of Casca, who in the original TV series was an independent warrior woman, an anime version of Sarah Connor or Ripley. The movies began that assassination by softening and infantilising her character design, and Casca’s downfall is rendered complete at the end of the Eclipse arc, making her respond to her brutalisation by apparently lifting dialogue from a doujin, and opting for the cliché of having her ‘enjoy’ it. And then there’s the aftermath. What’s worse is what happens to Casca is canon, mangaka Kentaro Miura wrote it that way. Once I learned that, I realised that when it comes to Berserk, The Golden Age arc is all I really need, and only the 1997 TV version at that. I don’t want to watch any further.

Also, as movies go, The Advent doesn’t really work structurally. It’s tells part of a serialised story, but in terms of beginning, middle and end, it’s all middle. The series at least ended on a crescendo; it may have been a cliff-hanger, but tonally it was very much an ending. By showing the aftermath, the movie picks up momentum again, leaving you anticipating more of the story. So chalk this one up to, “I watched it so that you don’t have to.” One day I’ll be able to purge that urge to complete things from my system. It’s not good for my wallet, even at under £3.