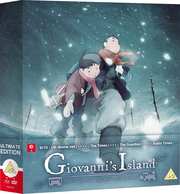 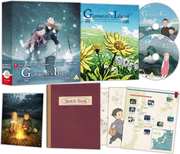 It’s something that people with a Eurocentric/Western perspective are unlikely to consider, but it turns out that Japan and Russia are just a handful of kilometres apart, just a small stretch of water separating two islands. It’s a comparative stone’s throw, as close as France is to Britain, and consequently the history in that region is just as complex and fractious as it is here. That also means that there are perspectives that we might have missed when it comes to history that we take for granted. After all, World War II ended when the US dropped the atom bomb on Hiroshima and Nagasaki and Japan surrendered, to be occupied and rebuilt by the US in something approaching their image. What I didn’t realise is that the same hustle for political dominancy in Europe following the end of the war happened in the East as well, and following the end of the war, the Soviet forces pushed south towards Japan to annex territory that had long been contested between the two. They didn’t get too far, but far enough for the events that inspired this movie to occur. Yes, Giovanni’s Island is based on a true story. 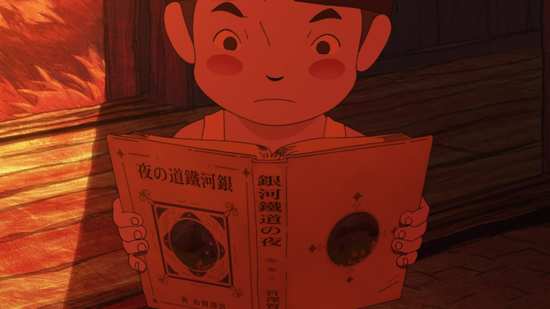 The war has managed to avoid touching the northern Japanese island of Shikotan, the militia stationed on the island has been untested, there’s enough food for everyone, and life goes on pretty much as it always has for the islanders, especially young brothers Junpei and Kanta. But then on the 15th of August 1945, the declaration of unconditional surrender is broadcast. As well as the shock, there’s also fear, at what the occupying American forces will be like. But two weeks later, when Kanta and Junpei are in class, it’s not the Americans that arrive, it’s the Soviet army, and they are quick to stake their claim on all the choice real estate on the island. Junpei’s family is kicked out of their own home by the Soviet commander, making do with the stable next door, and the Japanese become second class citizens overnight. It isn’t long before the Russians’ families also arrive, and Junpei and Kanta slowly form a friendship with the commander’s daughter, Tanya. As ever, children are quick to adapt, but can such a friendship survive when adults make all the decisions? 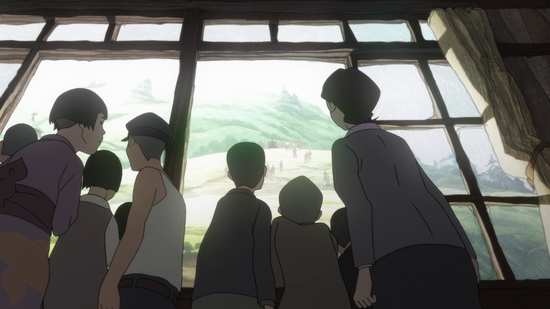 Giovanni’s Island gets a 1.78:1 widescreen 1080p transfer on the Blu-ray disc. It’s an ideal transfer, clear and sharp, with excellent detail, bringing the animation across without any issues. Colours are strong and consistent, and Production IG’s mark of quality is immediately apparent. The animation is a wonderful blend, with classic, almost vintage character designs, presented with a modern eye to cinematography and style. It’s a rich and detailed animation that takes on a whole other dimension with the story told through children’s eyes, and their tendency to lapse into imaginative fancy. 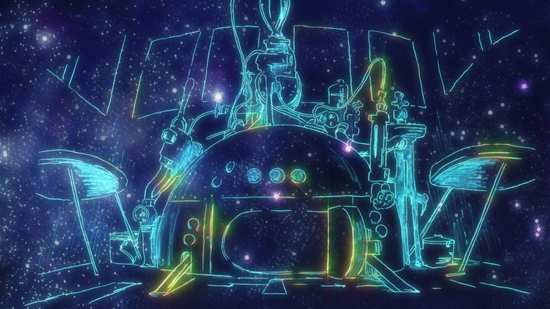 You have the choice between DTS-HD MA 5.1 Surround English and Japanese with subtitles and signs locked to the appropriate audio track. Well, I say English, but in either version, this is a multilingual film, with a lot of dialogue in Russian, and a notable amount of Korean as well. For the English dub, only the Japanese dialogue is dubbed (not the songs), so you will still get subtitles to read for the Russian and Korean dialogue. The dialogue is clear, the music is truly evocative, and the surrounds are put to decent use in giving the film space, ambience, and enlivening the moments of action. 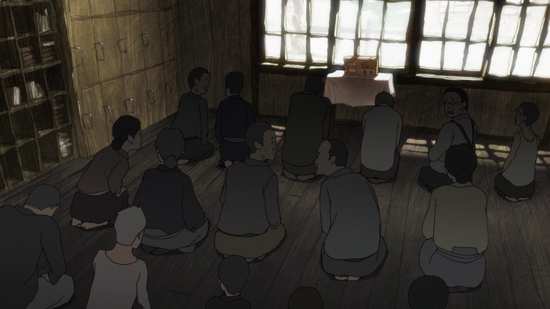 This Ultimate Edition is pretty bijou by All the Anime’s standards, but the gorgeous artbox is still pretty hard to store at an unconventional 18x21x2cm or thereabouts. You get one Blu-ray and one DVD of the film held on each inner face of a digipack. Also inside the case, you’ll find a single artcard informing you which one of a thousand limited copies you own. 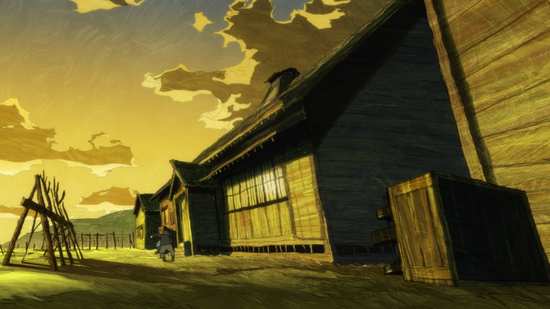 Most substantial is the 96-page artbook (hence the odd size of the case). It’s the peach of the package; as well as the wonderful art, it offers information on characters and locations, the historical background, the real story that inspired the film, production notes, an interview with the director, the production team, and the Russian voice actress behind Tanya. 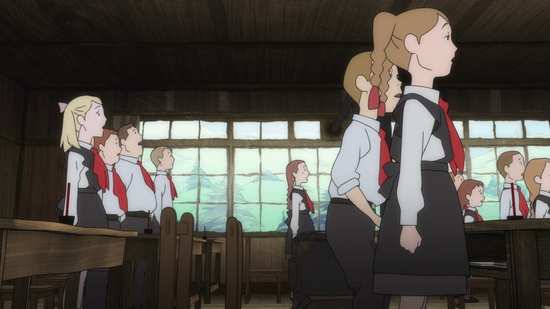 If that isn’t enough, you’ll also find a 37:44 making of featurette on the disc, an interview with Polina (Tanya) which runs to 4:27, another version of the Troika song (4:14), and a slideshow art gallery which lasts 7:23. 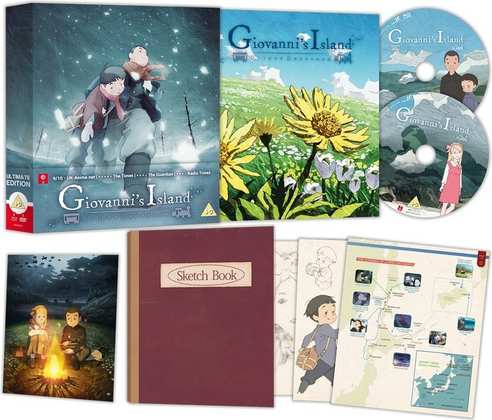 There is an understandable reluctance to cover the Second World War period for entertainment purposes, at least in the films that Japan looks to sell across the world, and in terms of anime features that has led to a degree of commonality and predictability in the stories that we do get. It might be a case of diminishing returns, or it might be a case of watching Giovanni’s Island a little too soon following my viewing of the superior In This Corner of the World, but I have to admit to feeling just a tad jaded. These films are as apolitical as you can get, outside of the universal politics of decrying human conflict. There’s no sense of nationalism, outside of misplaced and mistaken jingoism, and the stories are always told from the viewpoint of the innocent, most often the children. And just like in the latter film, and films like Barefoot Gen, and Grave of the Fireflies, there has to be a heart wrenching and personal tragedy to emphasise just how cruel and unfeeling distant political ideology and the resulting conflict can be. By this point, there were moments in Giovanni’s Island when I could feel its deliberate attempts to tug at my heartstrings, to manipulate my emotions, and that had the opposite effect to what was intended. No doubt if I had watched this first, or with sufficient distance in time from In This Corner of the World, I’d have been more appreciative of Giovanni’s Island. 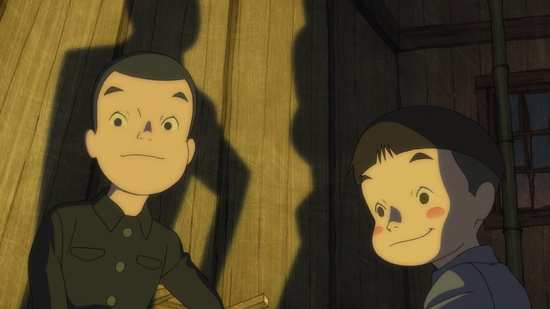 There is much to appreciate about Giovanni’s Island, and not just the ‘unknown’ tale of the Soviet occupation of the Kuril Islands and the subsequent displacement and repatriation of the Japanese islanders. It’s also a useful reminder that the conflict doesn’t actually end the moment someone signs a surrender or a truce; that the consequences of the war last long after the war has ended. In this film, the Shikotan islanders get caught up in the burgeoning Cold War brinkmanship between East and West, as while the US occupies most of Japan, the Soviets stake their foothold on the Northern islands. For the Shikotan islanders, they have to live with what amounts to an invasion and occupation. 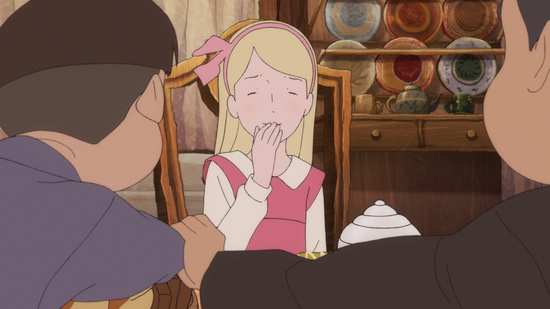 As seen through the eyes of children such as Junpei and Kanta, while initially scary, it becomes something of an adventure, and with children, uneasy co-existence quickly transforms into friendship, especially for Junpei and Tanya, with even language not much of a barrier between the two. Being second class citizens means life is harder, and Junpei gets some idea of how serious things are when he learns that his father Tatsuo has been illicitly hoarding rice and sneaking it to the villagers, while his uncle Hideo is a classic spiv character, with a carefree persona and who elicits Junpei into his smuggling schemes. Even with that, there is still a sense of hope and optimism in the way the children interact, Junpei and Tanya in particular. 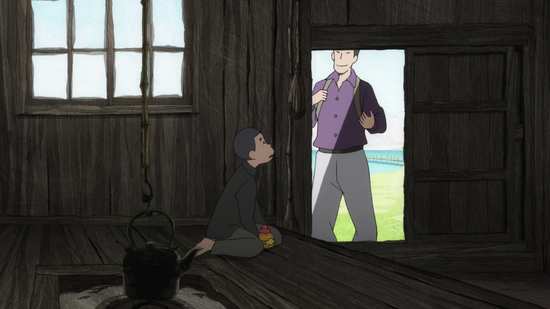 That isn’t to be, when adults thousands of miles away are making decisions regarding their future; treaties have stipulated that Shikotan Island now belongs to the Soviet Union, and the Japanese aren’t wanted there. They are to be removed and repatriated to mainland Japan, only this is done by a Soviet army still in the mindset of war, requiring a stopover in Siberia and time served in an internment camp, and it’s here that the story takes a turn for the bleak. But through the film, there is that childhood resilience and optimism, as well as the sense of imagination. In Giovanni’s Island that is represented by the touchstone of Night on the Galactic Railroad by Kenji Miyazawa, the favourite book of Junpei and Kanta’s late mother, and one that they have grown up reading and memorising. They love the idea of trains, even if they have never seen one in the real world, while the themes of the story help them get through the adversities they face. 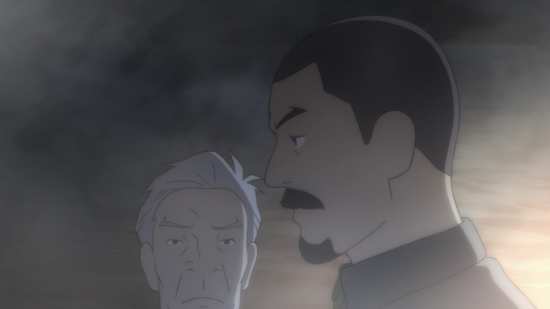 Giovanni’s Island is a good film, tender, heartfelt, and blending the optimism and hope of childhood with the harsh realities of the world. It can make you smile and laugh just as much as it brings a tear to your eye and make you rail against the inequities of life. Personally, I appreciated the sequences on the island the most, my hopeful nature drawn to the friendship between Junpei and Tanya, and I would have loved to have seen more of that. Things got harsher in the final act, with interment and repatriation for the islanders, and it’s also here where my admiration of the film became tempered by a predictability borne of my own over-familiarity with the genre and its tropes. What redeemed the film in my eyes was the framing story, that of an older Junpei, and his teacher Miss Sawako returning to the island after some 50 years. It means that the film ends on a positive, hopeful and indeed magical note.

Giovanni’s Island isn’t quite the best of its genre, but like all such anime set in the late-post War era, it tells its story very effectively. All the Anime’s Ultimate Edition certainly doesn’t disappoint when it comes to extra features, and presentation, while the artbook is rich and informative. If you can find a copy, it’s well worth picking up.