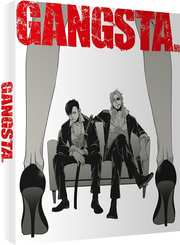 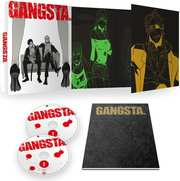 There are certain moments, events in the anime industry that can affect a fan on a personal level. That’s not something you see in other art forms. I doubt many Star Trek fans would get choked up if Paramount’s share price dipped, but when Studio Manglobe went out of business, I had to take a minute or two to mourn the departure of an exceptional production house from the anime industry. Just looking at the Manglobe titles on my shelves, shows like Deadman Wonderland, Ergo Proxy, House of Five Leaves, Michiko & Hatchin, The World God Only Knows and Samurai Champloo, it becomes clear that they were a studio that invested their products with substance and style, and a whole heap of originality. Perhaps not conforming to the market mainstream was ultimately a factor in their demise, and certainly Samurai Flamenco didn’t help. Their last production as a viable entity was this, Gangsta., a show which is just as removed from the mainstream anime demographic, but on the surface, a show which Western anime fans will love, certainly Western anime fans who got into anime the way I did, through the blood-and-gore, hard-hitting sci-fi actioners of the nineties. 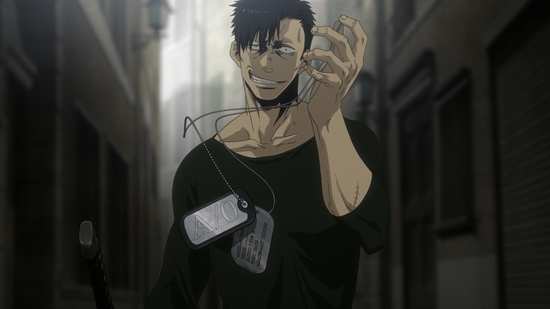 The city of Ergastulum lives and breathes organised crime, but you don’t have to be in a gang to thrive. Worick and Nic are handymen, who hire out their dubious services to whoever can meet their price. It helps that Nic is a Tag. He has serious fighting abilities, a legacy of military sponsored pharmaceutical research, but for which he has paid a price. During one job to wipe out an upstart gang encroaching on one of the established four powers’ territories, they pick up an unlikely trophy, a prostitute named Alex. 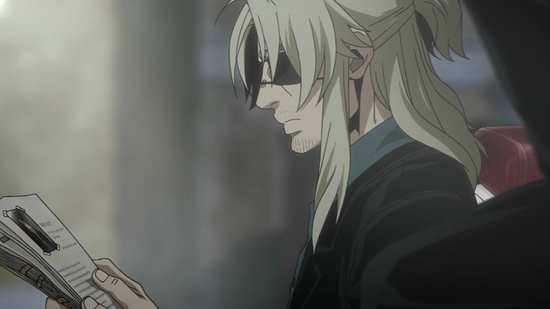 12 episodes are presented across two Blu-rays from All the Anime as follows. 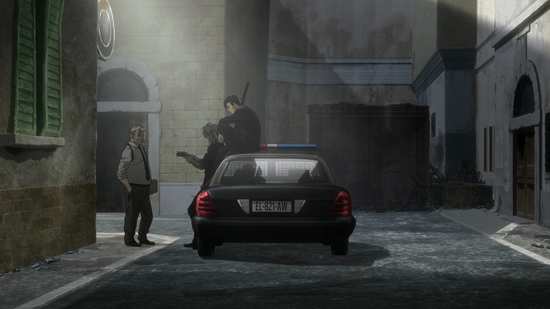 Gangsta is presented with the usual 1.78:1 widescreen 1080p resolution and aspect. The image is clear and sharp. I noticed no issues with aliasing or compression, and the artwork comes across with boldness and clarity, with strong colours and distinct lines. There is a bit of banding in shadowy scenes however. It looks great... when paused. It’s just that in motion, Gangsta is somewhat lacking. The budget has certainly been spent on the action sequences, which are engaging, but the rest of the animation seems somewhat limited, and the show has more in common visually with one of those old anime from the cel and paint days, than it has with more current, visually dynamic CG anime. 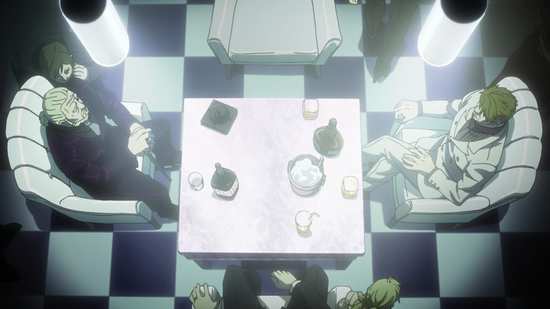 It’s the usual choice between Dolby TrueHD 5.1 Surround English with signs, and Dolby TrueHD 2.0 Stereo Japanese with subtitles. Incidentally the end theme isn’t subtitled until episode 7. The Japanese audio was my preferred choice, with the actors suited to their roles. Music comes from Tsutchie, who also supplied music for Samurai Champloo, and the atmosphere in Gangsta is certainly stylish and evocative as a result. The dialogue was clear; the subtitles timed accurately and free of typos. I gave the English dub a quick try, and didn’t immediately feel the need to turn it off, which from me is practically an endorsement. 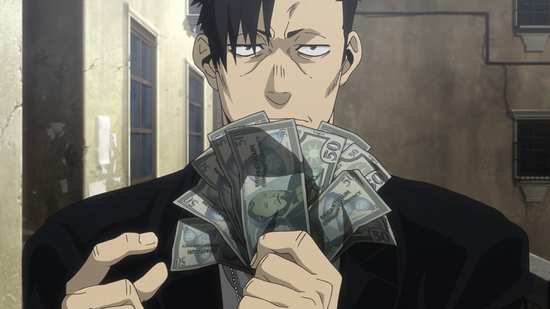 These Funimation authored discs present their content with animated menus,

Disc 1 autoplays with a trailer for Dimension W, and the sole extra on this disc is the audio commentary on episode 1, with ADR Director Chris Bevins, Ian Sinclair (Worick), Brandon Potter (Nic), and Felecia Angelle (Alex).

Disc 2 autoplays with a trailer for Grimgar: Ashes and Illusions

There is a video commentary on episode 2 from Ian Sinclair (Worick), Brandon Potter (Nic), and Felecia Angelle (Alex). Yes, you have to look at the actors as well. 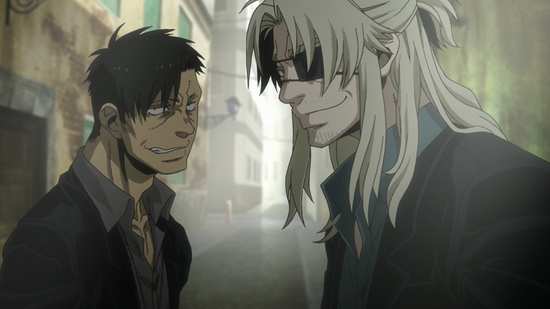 Episode 9.5 is nothing to get excited about. It’s a recap episode, and probably the worst recap episode I’ve skipped. I sampled about five minutes of it, and it’s just voiceover guy narrating over clips for the first half, then voiceover guy with character and world profiles for the second half.

I only saw the check discs, so can’t comment on the Collector’s Edition packaging or the physical extras. 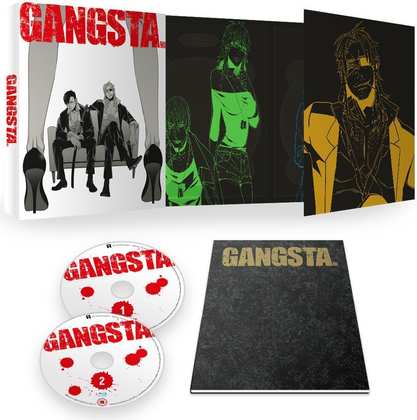 Gangsta went from mildly disappointing to an utter waste of time within the space of 12 episodes, something which I wasn’t expecting. It’s a fair show, an interesting story set in an intriguing world, but let down slightly by single-note characters and a somewhat tedious narrative, made more leaden with far too many flashback sequences. Most of the way through the show, I was thinking of other anime that do it better. If you like crazy action in a “wretched hive of scum and villainy”, I’d suggest Black Lagoon. If you want interesting characterisations and a gripping mafia story, then watch Gungrave. And if you want it all, the characters, the story, the action all in the organised crime milieu, then you can’t get much better than Baccano! 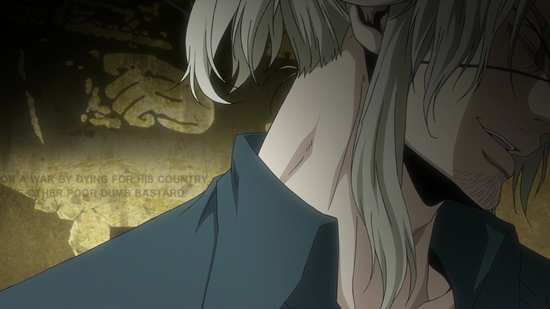 Compared to all of these, Gangsta is merely an also-ran, but it is watchable enough. But it turns out that I didn’t know what every Gangsta fan must know, and probably isn’t news for you at this point, but for me, elicited no amount of cursing, gnashing of teeth, and spitting blood. Gangsta just stops. Episode 12 is all you get, and unsurprisingly, it turns out that Manglobe actually went out of business in the middle of production. The story just hangs, and it isn’t even a decent, climactic cliff-hanger that makes you thankful of the journey the way the way the original Berserk anime did. This is like the film snapping halfway through a movie. Gangsta just ends at the worst possible point, leaving everything up in the air, and with none of the storylines in any way resolved, there’s no satisfaction to be had with this show whatsoever. 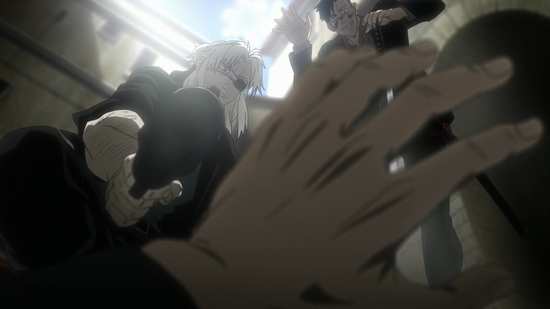 All that are left are wistful thoughts of what could have been. It is an interesting world, with Ergastulum a closed off city-state governed by organised crime. The Tags, the Twilights are children of a generation of soldiers enhanced for war by chemical and pharmaceutical means, the drug Celebrer. Those children were born with abilities beyond those of normal humans, but a dependency on the drug as well as a shortened lifespan. Considered less than human, Ergastulum is the one place that they can survive and even thrive, and naturally they get drawn into the organised crime that is rife there. 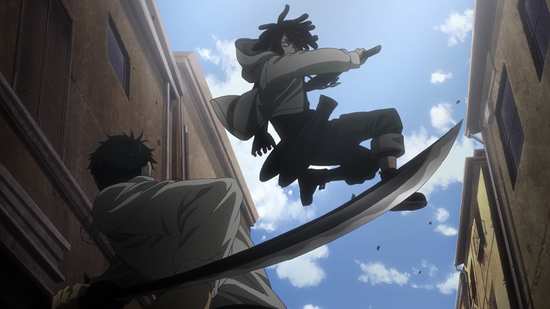 The two protagonists in the show, Worick and Nicolas are a couple of Handymen, fixers who stand outside the four families and the police but sell their services to all. Worick is a normal human, and Nicolas is the Tag that he is contracted to. They both have a shared past that is visited extensively through the flashbacks, and early on they pick up Alex, a prostitute that they rescue from a gang that they’ve been contracted to wipe out, and it turns out that Alex has a past too, as well as a dependency on a drug that her pimp used to deaden her emotions. 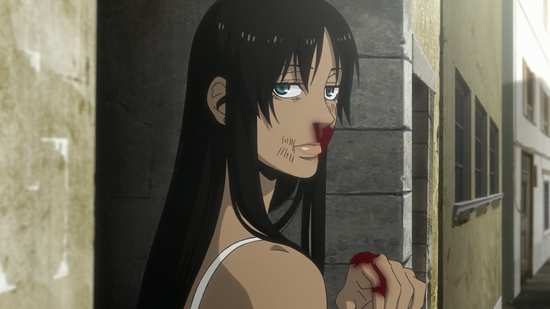 Life in Ergastulum revolves around the gangs, and the drugs that the Tags need to survive, the uppers to enhance their abilities, and the downers to counteract that effect. The show certainly grabs the interest as the world is unveiled, the characters introduced, although it seems that all the villains and anti-heroes in Ergastulum share the same evil grin. The story starts to get going around episode 5, with the mass murder of Tags, and the politicking between the gangs. Things get complicated when it turns out that there is an outside force of Hunters targeting the Twilights, and many of the characters have history. I don’t know why I’m telling you all this, as just when Gangsta is moving up a gear, having set the scene and developed its characters with its tedious flashbacks, and now really engaging with the contemporary story and finally putting some energy and pace into the show, it just stops. 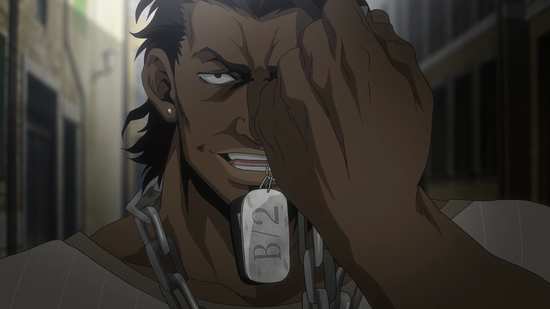 Gangsta is at best a footnote in anime history, and it might be the kind of show to buy if you have an idle curiosity in an anime that steps away from the modern aesthetic of the moe and the cute, or if you’re a fan of the Gangsta manga, and want the anime to compliment your reading. But really, I can’t recommend this for a purchase, unless another anime studio picks up the license, and finishes animating the first season.