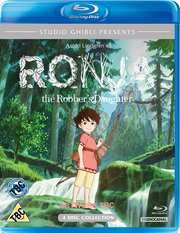 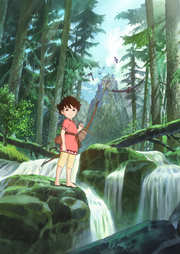 Review for Ronja The Robber's Daughter

I’ve often stated that my indoctrination into anime began long before I even knew anime existed. Teatimes after school were spent in front of the television, where I simply lapped up cartoons that offered serialised storytelling. I didn’t know back then that this was a Japanese art form, that shows like Mysterious Cities of Gold, Around the World with Willy Fog, and Dogtanian were unique in the way they told their action adventure stories, and that Western broadcasters looking for shows to fill their schedules had bought and dubbed these Japanese/European co-productions. But it seems that this was a short-lived dalliance, and subsequently, the only anime shows that were adapted for kids’ TV were those card-game tie-ins like Pokemon, while in Japan, the serialised anime format became more specialised and niche, the kind of anime that I love to watch now, but not the kind of show you’d want a primary school child to see. But once in a while, they do make an attempt to make something more mainstream. A few Christmases ago, ITV broadcast Oban Star Racers, another Euro-Japanese co-production with a soundtrack from Yoko Kanno. In 2015, we got this show, Ronja, the Robber’s daughter, although given modern viewer tendencies, its English dub was actually streamed on Amazon Prime earlier this year.

Actually, I’m going to have to take the anime badge off my reviewer’s hat to review this show. While it may be Studio Ghibli’s first television series, directed by son of the master, Goro Miyazaki (Earthsea, From Up On Poppy Hill), Studiocanal know which audience they are targeting the show at, and that doesn’t include us otaku. Studio Ghibli stepped away from tradition and created Ronja as a 3D cel-shaded animation, the sort of style which appeals to the younger demographic, while Studiocanal are only offering the English (UK) dub on the disc; no Japanese, no subtitles to read. 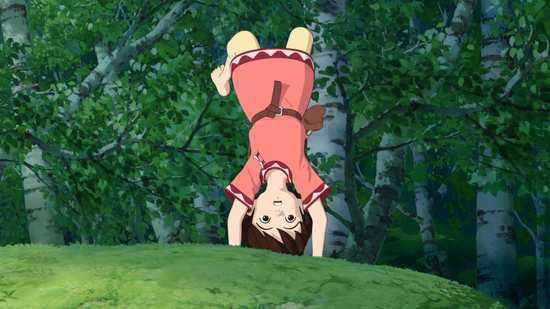 Ronja was born the night of the big storm, the night that a lightning strike split her father, bandit chief Mattis’ castle in two. Ronja grows up exploring her world and the forest with a sense of fearlessness, necessary in a forest populated by all sorts of animals, as well as harpies, grey dwarves and the Unearthly Ones. Then one day, rival bandit chief Borka moves his band into the other, uninhabited half of the keep, something that infuriates Mattis no end. And with Borka comes his young son Birk, who is equally infuriating for Ronja.

The 26 episodes of Ronja the Robber’s Daughter are presented across 4 Blu-rays from Studiocanal, along with some extra features.

Disc 1
1. Born in the Storm
2. First Trip to the Forest
3. Fear in the Forest
4. Hearing the Whistler
5. Enemy in the Fort
6. Taking Without Asking
7. Song in the Mist

Disc 2
8. Autumn Deepens
9. Stuck in the Snow
10. The Vow to be Brother and Sister
11. To Be Done in Secret
12. The Whistler Underground
13. Wretched Robbers
14. Splendid Spring 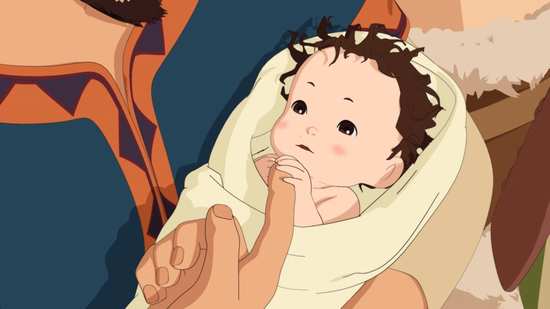 Ronja the Robber’s Daughter gets a 1.78:1 widescreen 1080p transfer on these discs, which is perfectly acceptable. The animation is smooth, there are no signs of compression, aliasing or digital banding, and colours are strong and consistent. Collectors may be irked at Studio Ghibli stepping away from traditional animation for their first television series, and instead opting for broad audience friendly cel-shaded 3D CGI. The character animation is adequate, although the character designs aren’t exactly the most expressive and detailed, and while the backgrounds are detailed and seem traditionally painted, the CG elements have a plastic artificiality to them that makes them not quite fit in. The important thing is that the story is good enough for most viewers to forget all this while watching the show.

The images in this review were kindly supplied by Studiocanal. 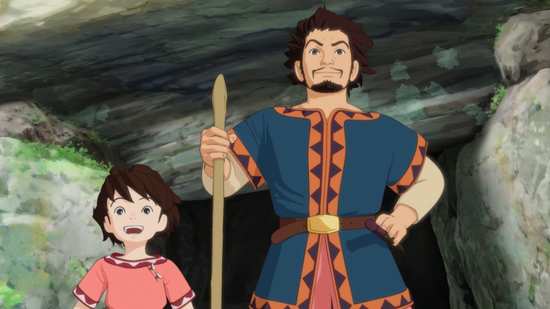 The sole audio track on this release is the PCM 2.0 Stereo English dub. For once when it comes to anime we have a native UK dub, with actors like Rufus Hound, Adrian Edmondson, Morwenna Banks supplying the voices and Gillian Anderson (in English mode) serves as Narrator. It’s a good dub with the voices well suited to their roles, while the localised version of the theme song is very catchy. Unfortunately Hard of Hearing audiences will be left out by a lack of subtitles, but for everyone else, the actors speak clearly and there’s never a need to skip back to replay a mumbled line.

The discs boot to animated menus. The episodes are listed by number rather than name.

All of the extras are on disc 4, and reveal something of a schizophrenic approach to this release. The series itself, and the way it is presented is very much like the anime of my childhood, aimed at a young audience that won’t care about this show’s origin, or the name Studio Ghibli. They just want to enjoy a decent story, and that’s what they get here, the series wholly localised for an English speaking audience. 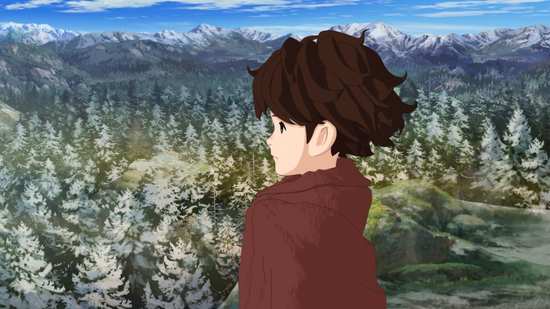 The extras however are aimed at the anime fan, looking at the Japanese production side of things.

The Press Conference lasts 6:14 and is the usual EPK promotion for the show, the staff and some members of the Japanese voice cast on stage to promote the series.

The Interview with Goro Miyazaki lasts 11:18 and is a bit more of an informal chat with the series director.

There are five Making Of featurettes running to a total of 38:07. These cover various aspects of the animation process. All the featurettes are in Japanese with English subtitles.

As I said, it’s very much for the anime fan who wants original language and subtitled anime alongside the English dub, and for whom the dub only nature of the show will be disappointing. Then again, the extras are a little too esoteric for the target audience, who would probably appreciate something more colourful, accessible and fun. There should have been a featurette on the UK dub at least. 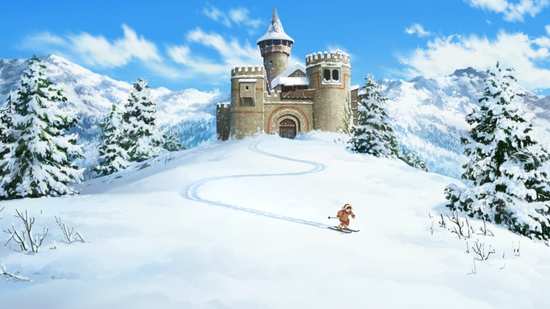 I feel I must reiterate that this is not what Western anime fans would consider anime. Hollywood and the other Western animation industries wholeheartedly embraced CG animation 20 years ahead of Japan, and Japan has been playing catch-up ever since. Ronja the Robber’s Daughter looks ten years older than it is when it comes to character designs and animation. The characters are simplistic, the colour application is plasticky and lacking in nuance, but the important thing is that the animation is consistent throughout, and never presents any moment, any glitch that might break the suspension of disbelief. What you do get with this series is Ghibli’s trademark storytelling, characters and narrative that draw you in.

Ronja the Robber’s Daughter is a tale that children will love, especially those of an age that I was when I first discovered shows like Ulysses 31. It’s also an age where the origin of a show is less important than the content, the story here is entertaining and gripping, and if a 40-something reviewer can get drawn into a children’s story, it has to be doing something right. Astrid Lindgren, best known for Pippi Longstocking wrote Ronja the Robber’s Daughter, and Ghibli have adapted that novel into this 26 episode series. Each episode plays out like a chapter in the story, but most of the episodes also tell little adventures in their own right, narratives with a beginning middle and end that justify the investment of 20-odd minutes. There is the odd episode that meanders with little happening, and the overall pace of the story is slow, but it’s never dull or uninteresting. 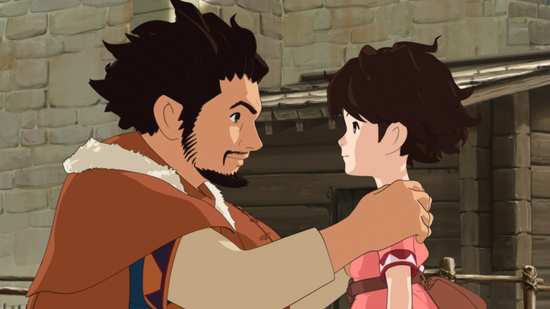 It’s a universal tale of growing up, and having adventures. The difference being that Ronja is born into a band of robbers in mediaeval times, and lives in a castle with her parents and her father’s bandits, growing up to be the apple of their eyes. The castle is in a forest where the bandits work, and Ronja’s playground is the natural world outside the castle keep. If there is one thing that she learns early, it’s that fearlessness is a necessity when it comes to growing up, as is self-sufficiency and quick thinking. It feels as if the world belongs to her, until the day that she meets Birk son of Borka, leader of a rival band of robbers. Mattis and Borka may hate each other, but as Ronja and Birk are the only two children in the forest, it’s only natural that they become friends and start sharing their adventures.

Of course that marks the first moment in every child’s life that they begin to see themselves as separate from their parents, having a different opinion, or in Ronja and Birk’s case, keeping their friendship a secret from their parents. That defines the rest of the story, particularly when the secret is revealed, and Ronja comes into conflict with her beloved father. 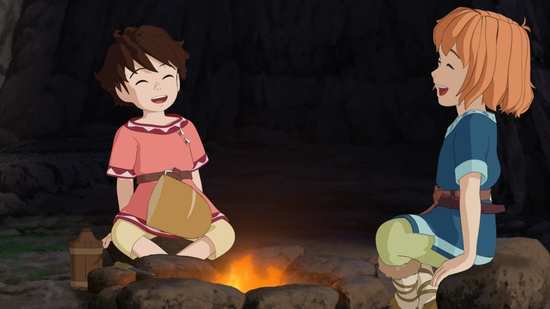 Ronja the Robber’s Daughter is a wonderful children’s adventure story, which blends the realistic experiences of children growing up, with the myths and magical legends of Scandinavia, the harpies, and the various creatures of the forest that they encounter. But there is also a respect and delight in nature, the turning of the seasons and the cycle of life. There are some important life-lessons in an entertaining adventure story with a cast of very likeable characters, and that’s a hallmark of great kids’ television.