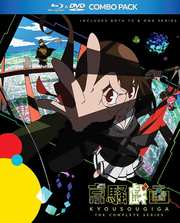 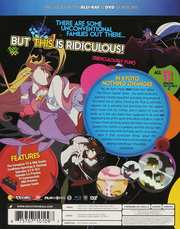 A few years ago, I had the distinct joy of streaming two shows, side by side, which on paper look remarkably similar. Both Kyousougiga and The Eccentric Family are about families, in Kyoto, and both have strongly supernatural elements to their worldviews. Both are somewhat quirky anime, stepping away from the usual and the clichéd. And Kyousougiga and The Eccentric Family couldn’t be more different, although I fell in love with them both. The Eccentric Family’s first season got a UK release through MVM a while back (although whether the second season will is up in the air given that NISA apparently no longer license anime in the US), but I waited patiently to see if Kyousougiga would get a release. You’d think that it would, given its anarchic style and offbeat narrative is right up the alley of a company like Anime Limited who released The Tatami Galaxy here. Alas that never happened, and I wound up importing the eventual US release from Discotek earlier this year. While it’s a combo release, the Blu-rays are locked to Region A, which makes this a review of the DVDs first and foremost. 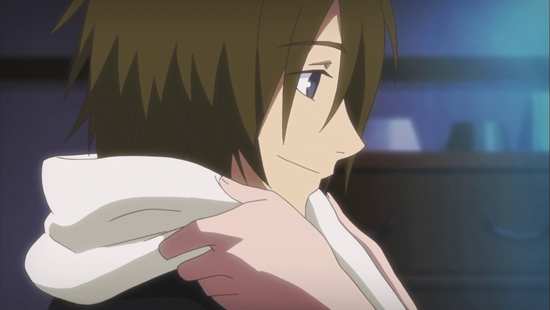 The priest Myoue left the city for the mountains, to live in solitary exile. The reasons become apparent when it transpires that whatever Myoue draws, comes to life. A black rabbit, Koto that he drew fell in love with her creator, and the Buddha granted Koto human form to be with the man she loved. Myoue and Koto started a family, a human child named Yakushimaru was soon joined by an older brother Kurama, and a demon sister Yase, both of which were drawn by Myoue. The priests in the city heard of this and were outraged, but Myoue took his family and escaped into one of his drawings, the Looking Glass City, a mirror Kyoto. 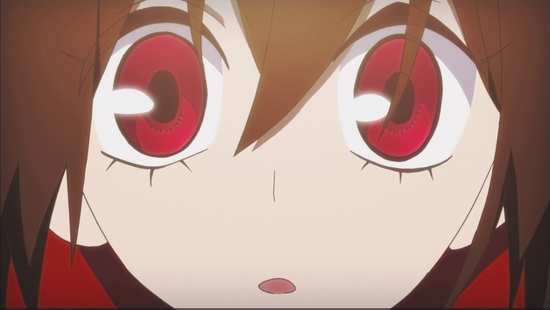 The family lived an idyllic life there, but Koto’s gift from the Buddha was a temporary one, only meant to last for as long as it took for Myoue to return her love. By staying in human form, she drew peril upon the Looking Glass City. When she left, Myoue left with her, leaving their children to rule over the eternal city they had created, where everyone and everything is immortal. Feeling abandoned, the children formed a Council of Three to rule the city, while Yakushimaru took his father’s name and also became a monk. And together they awaited the return of their parents. 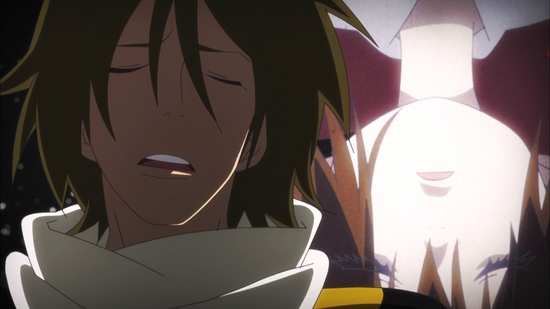 Then one day, the skies crack open with lightning, and a girl comes forth, bearing a powerful and mystical hammer, and accompanied by two Shikigami spirits, A-chan and Un-chan. Her name is Koto; she comes from the primary plane. She’s a member of the Unified Planetary Organisation, or The Shrine, an organisation dedicated to maintaining order in all planes of reality, and she’s come to the Looking Glass City to find her mother. 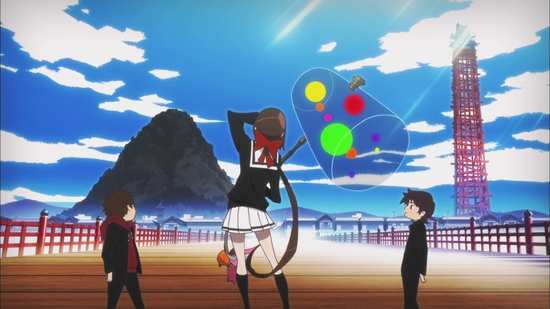 Anime series usually get promo videos, trailers to advertise their forthcoming delights. Kyousougiga is such a dense and complex story that it got a whole promo episode. That’s presented here as episode 00, and the 10 episodes of the show are also presented across two DVDs thus.

Disc 1
00. Kyousougiga
1. A Family’s Circumstances and its Background
2. What Came Was a Little Sister
3. The Eldest and His Happy Science Team
4. The Second Daughter and Her Wonderful Monsters
5. The Worries, Beginning, and Ending of the Young Third Son
6. A Story Where Two Plan and One Worries

Disc 2
7. Mom’s Back, and oh, Dad’s Back, Too
8. Troublesome Talks Here and There
9. Let’s All Think About What We Can Do
10. A Manga Movie About People Who Have a Fun, Busy Life 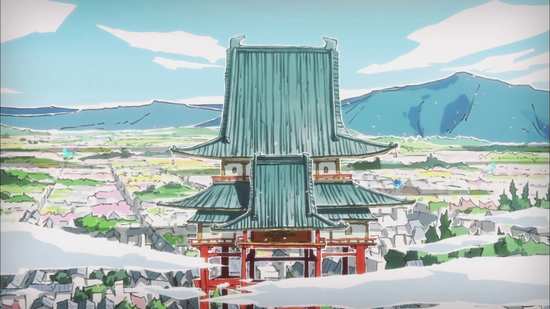 On the DVDs, Kyousougiga gets a 1.78:1 anamorphic NTSC transfer. I’ve seen better. The image is clear, and the show’s insane colours come across with retina-damaging intensity, but there is a degree of softness that puts me in mind of anime DVDs of yore, back before companies had access to HD masters and offered progressive encodes. Kyousougiga’s is defiantly interlaced, just like the Blu-ray discs, but it actually seems as if the DVDs are mastered from an SD source. However, playback is mostly smooth (there is the odd jerky pan), detail levels are decent, and the punk animation comes across with wild abandon. There’s a lot of action, crazy character designs, and wacky world designs, and you get the sense of Gainax stylings, reminiscent of shows like Gurren Lagann, Magical Shopping Arcade Abenobashi, and FLCL. It’s a riot of imagination and worth watching for that reason alone if nothing else. But if you can spin Region A discs, then the Blu-rays are definitely the way to go here. 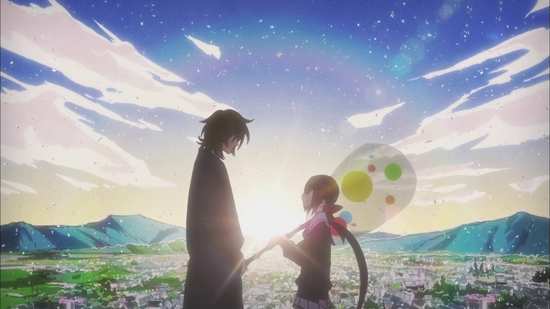 You get a DD 2.0 Stereo Japanese track with optional translated subtitles. Discotek offer colour subtitles for their anime, yellow for dialogue, blue for song lyrics. The audio is fine, bringing the action across well, leaving the dialogue clear, and doing justice to the show’s music soundtrack, which is filmic in quality, orchestral and choral, making the show feel ten times as big as it is. The subtitles are accurately timed and free of typos. One annoyance is an awkward and obvious layer change on disc 1. 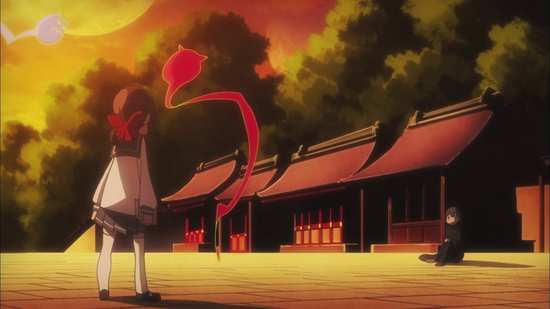 You get four discs on two central hinged panels in a BD Amaray style case. There is some cool inner sleeve art as well. The DVD discs boot to static menus.

You get two extras on disc 2.

Episode 5.5 Kyoto Live Edition lasts 25.39, and voice actors Ryouko Shiraishi and Erika Nakayama take viewers on a tour of Kyoto, with an emphasis on those locations that inspired scenes in the anime. You can do a compare and contrast, but of more interest is the history of these places, the people that lived there, and how those legends have been reworked and used as inspiration for the Kyousougiga anime. 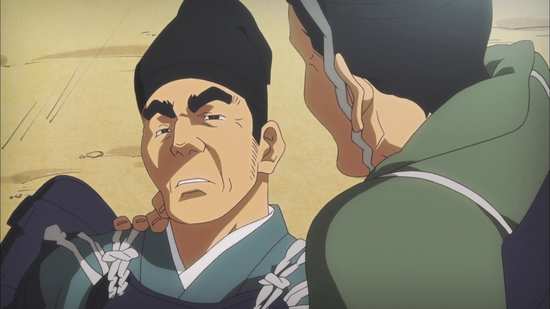 The show is also presented on two Region A locked Blu-ray discs, and much as I’d rather not watch this show on a teeny-tiny laptop screen, there are more extra features here that are worth watching. You do get episode 5.5 and 10.5 repeated on disc 2.

Kyousougiga was an original net animation before it became a TV show, and on disc 1 you get episode 00-5 of the ONAs. While episode 00 is practically the same as the episode 00 that comes with the series, episodes 1-5 are shorter in length and are more character focused than narrative. You get to see some of the events in the series from a different perspective, with different animation, but the concise character statements that they make offer a useful companion to the TV series. The total runtime here is 68:52. 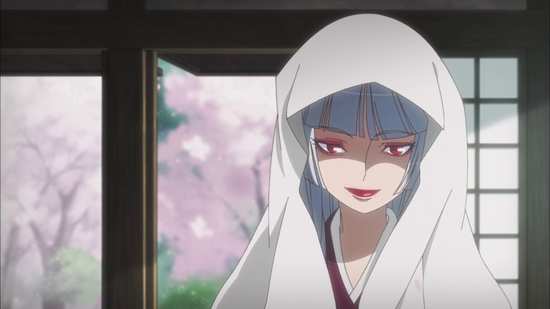 The rest of the extras are on disc 2. The ONA Preview Trailer lasts 5:08, the Broadcast Promos and Alternate Previews lasts 6:16, you get to see the two sponsor cards in a 22 second slideshow, and you get two textless openings and three textless closings.

Most substantial is the Episode 5.5 Kyoto Live Action (Extended) which is here in addition to the broadcast version. This lasts almost twice as long, at 40:37, although in terms of places shown, there’s a diversion to a manga festival where the Kyousougiga anime was being promoted. Otherwise the extended runtime offers more voice actor antics and a little more time spent at the various locations. 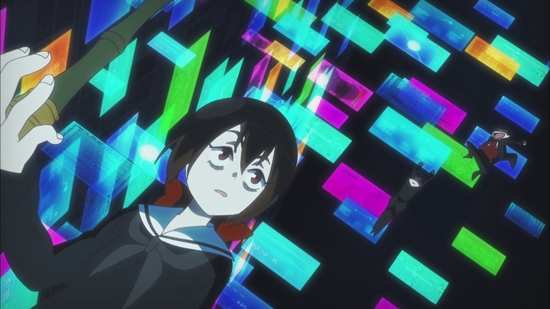 The Blu-rays present the show in 1080i widescreen 1.78:1 at 60Hz, with PCM 2.0 Stereo Japanese audio and optional subtitles.

I wish that this had been a 3 DVD set, so that the extra content had been available for us SD or Region B plebs. 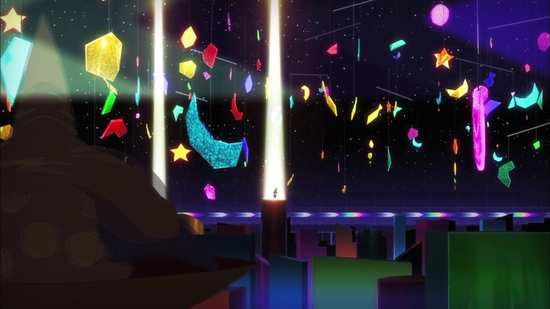 I wish this was available on Region B Blu-ray! As it is, I’ll have to make do with the DVDs in this collection, which are good, but just aren’t good enough to do justice to Kyousougiga’s anarchic and complex animation. But I’d much rather have the DVDs than do without Kyousougiga, as it’s one of the most inventive, smartly written, brilliantly realised, entertaining, and moving anime shows of the last decade. It takes the punk rock sensibilities of something like FLCL or Gurren Lagann and gives it heart. And it’s a unique show in my experience that has me welling up with emotion, and simultaneously laughing in hysterics. 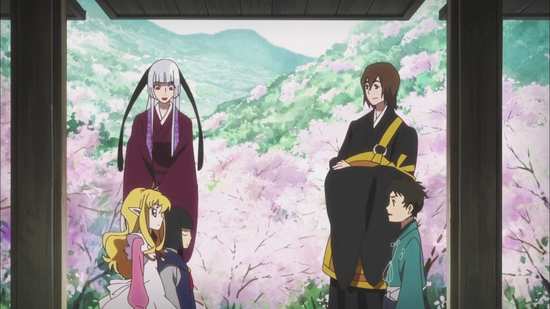 It’s a show that throws you right in at the deep end with the promo episode 00, which introduces the main characters, their anarchic world, and gives a highlights package of trivial and meaningful events, which lead to the episode climax, a significant point in the story. After watching it, you’ll be none the wiser, confused, scratching your head, but most likely intrigued as to what’s going on. I suggest that you watch the episode again after the end of the series, at which point it will make perfect sense. Anyway, following that opening episode, the subsequent episodes begin to fill in the background of this world, how the Mirror Kyoto came about, the family that consisted of the priest Myoue, the rabbit Koto, their children Yakushimaru, Kurama and Yase, as well as the other Koto’s past with her sensei Inari, and how their two worlds initially crossed paths. 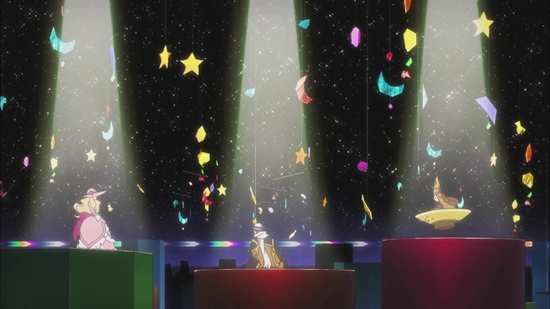 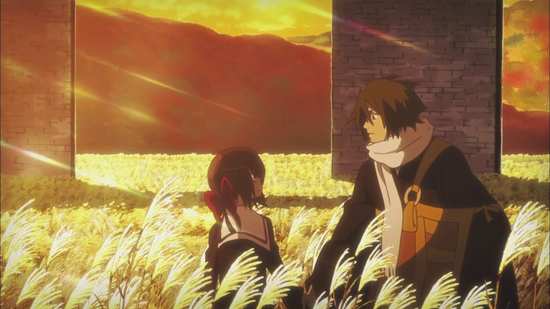 Kyousougiga is about the most basic of human stories, about family. It’s an unconventional family to be sure with mystical origins, but it’s family nevertheless, and the angst that is formed when families are torn apart lies at the heart of the story. The priest Myoue and Koto created the mirror Kyoto to escape to with their three children and they lived their happily together for a time. But mythical forces ensured that they couldn’t stay together, and the parents left, with Myoue passing his name and responsibilities in Mirror Kyoto on to his son Yakushimaru. The new Myoue was left with his regrets and his resentment, Kurama left waiting for their parents’ return so he could be free of his responsibilities, and Yase left clinging to the memories of their mother. 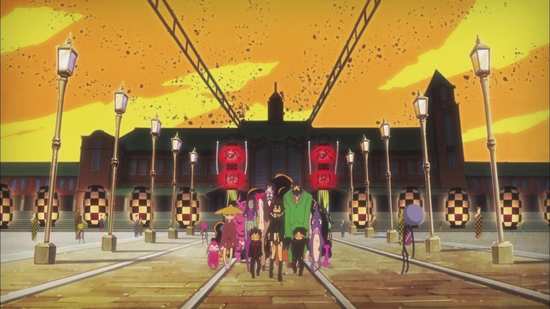 At the same time the other Koto was raised by her sensei Inari as part of the Shrine organisation, with responsibilities to keep the 12 worlds in order. But she longs to find her mother, the sole clue that she has is to look for a black rabbit, so the first chance she gets, she steals the hammer Aratama, and smashes through to the forbidden 13th world, Mirror Kyoto to look for her mother, and the two stories collide. 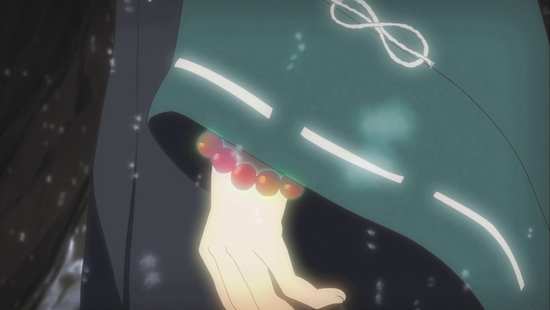 Loss and despair, hope and jubilation, Kyousougiga runs the gamut of emotions, while indulging in plenty of raucous comedy as well. But what astounds me most, and elevates the show to instant classic in my estimation, is that despite its basic story grabbing the viewer by the emotions, and even knowing its mythical overtones, Kyousougiga also develops what is essentially a creation myth for the 21st Century. A show about family that takes us into the realm of gods, universes, and multi-planar realities is breathtaking in its aspirations, and is stunning in that it actually succeeds. I desperately wish that Kyousougiga would get licensed for a Region B country, but until then, the DVDs in this Region A combo pack will have to do.