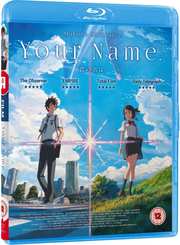 Review for Your Name

Let’s get this out of the way first. Not long after I got the check disc for Your Name, reports started being made of problems with the image quality, with one particular frame posted on a comparison website displaying noticeable compression that is absent in the original Japanese Blu-ray release, as well as a difference in gamma levels. Anime Limited have taken a look at the disc, and have issued a statement, indicating that while the disc will not be problematic for most audiences, they recognise that the image is not good enough for videophiles. Therefore, while there won’t be an official exchange program, the disc will be re-authored for its second print run, and anyone who is affected by the issue can send in for a replacement.

It is a disappointing note for what is probably one of the biggest anime feature films to date. It comes down to this disc being authored by Australia’s Madman Entertainment, and it does beg the question as to why. The average anime title will sell around 1000 copies in the UK, and in that instance, it makes sense to split costs and efforts and get one disc authored for use in multiple territories. But Your Name is massive, it will most likely pull five figures in sales across the UK, and six figures is not inconceivable. This really should have been authored locally to begin with. 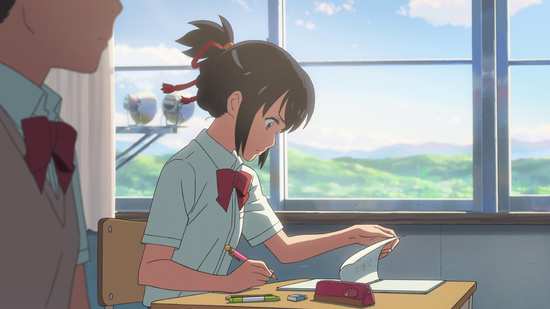 Your Name really is big. It’s the fourth biggest film of all time in Japan, behind Spirited Away, Titanic and Frozen, to date the seventh biggest traditional animated movie in the world, behind five Disneys and The Simpsons movie, and it’s the biggest selling anime feature in the world, outperforming even Spirited Away globally if not domestically. That’s all according to Wikipedia of course. What is surprising to me is that the name behind Your Name is that of Makoto Shinkai. To my mind he isn’t the mass-market, populist director that packs out multiplexes and invokes dollar signs in the eyes of studio bosses. In my mind he’s more of a M. Night Shyamalan, albeit more appealing in his subject matter. Thematically, and tonally, Shinkai is something of a one trick pony. His films always have elements of unrequited love, of distance, of light and shade, of melancholy and nostalgia, and the trick is in the way that he intertwines these ideas with sci-fi. Then again, you could say that he’s been refining these ideas in all of the films that he has made to date, from Voices of a Distant Star, all the way to Garden of Words, and in Your Name he has finally made the movie that he’s been trying to make for the last fifteen years. Of course that statement only holds until the next Shinkai movie is released. 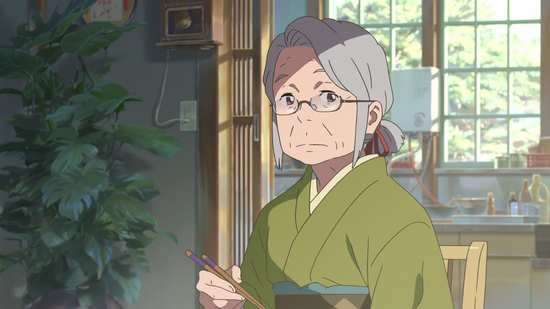 Mitsuha Miyamizu is a country girl born and bred, daughter of a small town mayor, and heir to an ancient tradition of shrine maidens, and she’s bored senseless with her lot, life in a village with two pubs and zero cafes and absolutely no sophistication. She dreams of going to Tokyo. Then she literally does dream of going to Tokyo. She goes to sleep one night and wakes up in the body of Taki Tachibana, a high school boy living in Tokyo, with a part time job as a waiter in an Italian restaurant. Of course that means Taki’s waking up in her body, suddenly having to get used to living in a small town where everyone knows everyone else, and never getting used to the novelty of having breasts. Thereafter the two continue swapping at random, leaving each other notes to learn about the other, and trying, but failing to not meddle in the other’s life. Then one day, during the summer festival, as a comet blazes overhead, the body-swapping just stops... 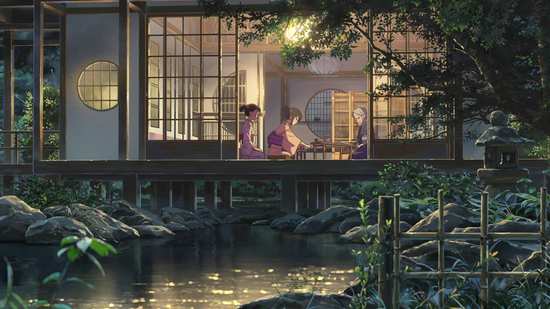 Your Name’s 1.78:1 widescreen 1080p transfer is good enough to watch. Makoto Shinkai’s visual aesthetic is wholly apparent here; the warm colours, the use of light and shade, the lighting effects, the lens flare, the appealing and memorable character designs and obsessive level of detail in sets and backgrounds. Every frame is a work of art, and it’s enthralling to watch, even before we get to the excellent animation, and the quality of the storytelling. But the elephant in the room is the transfer, and it’s here that the committed videophile will be weeping. The compression is evident in scenes with fast motion, as indicated in the aforementioned comparison website, but get up close to the screen, and you’ll also notice compression artefacts around line detail. It’s not an issue during normal viewing though. What is an issue is the change in gamma. Everything looks brighter, hazier; there are no true blacks left in the image, and the contrast is off. This results in an overall loss of fine detail, and it’s not something that can simply be resolved by lowering the brightness on your TV. 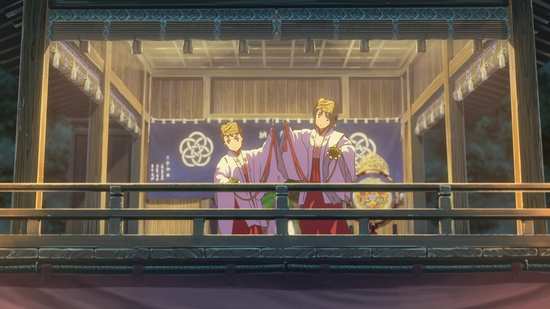 You have three options here, DTS-HD MA 5.1 Surround English with English language songs from RADWIMPS with signs, 5.1 English with original Japanese songs, with lyric translations and signs, or the original Japanese 5.1 track with translated subtitles, signs and song lyrics, although the audio options aren’t locked during playback. I listened to the Japanese audio and it was mostly fine, a nice surround presentation of the film, bringing across RADWIMPs music to pleasing degree, immersing you in the action, while keeping the dialogue clear and centralised. 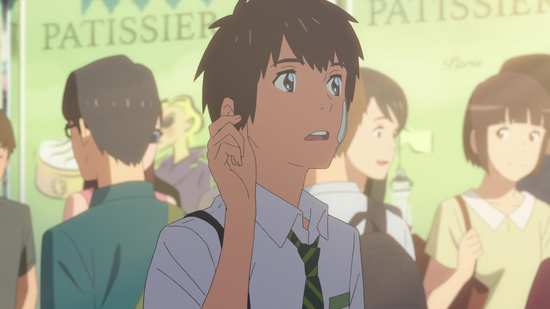 Apparently issues have been reported when downmixing the track to a stereo setup. However, I did sense another issue with the dialogue, a degree of clipping around louder moments and higher frequencies, a sense of slight muddiness. It’s most noticeable when the girls are speaking. To me, it sounds more like DVD lossy audio. Once again, this is just the dialogue track, not the rest of the audio. The subtitles are accurately timed and free of typos, although I did have to skip back and read one line again which didn’t scan properly. Another thing is that not all of the on-screen text is subtitled, a small but relevant issue when Taki and Mitsuha are communicating by notebook, text, and body graffiti. Also, the song over the end theme is not subtitled. I gave the dub a try and it sounded good enough to stick with, although the way it handled gender pronoun confusion was a little clumsy. 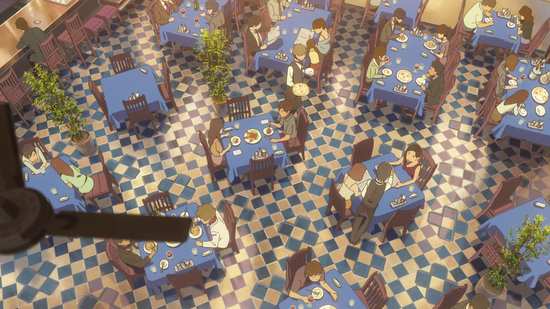 You get the Japanese promos (5:04), the English trailer (1:39), the Makoto Shinkai Filmography, which is essentially text captions introducing each film’s trailer (10:45), and Madman trailers for Boruto: Naruto the Movie, Steins;Gate the Movie, Dragon Ball Super Part 1, and The Boy and the Beast.

Of most interest here will be the TV Special, which lasts 22:27, although it comes off as an EPK piece, an extended trailer with interjections from the voice cast. 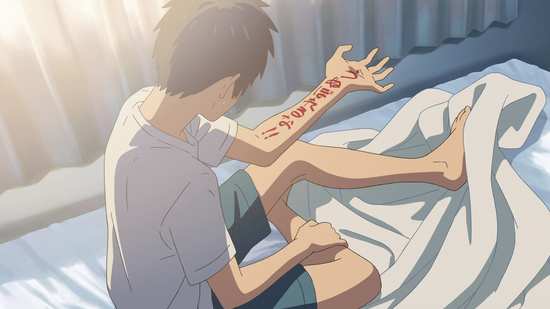 This is probably the best Makoto Shinkai movie to date; it’s certainly the most populist, and the most entertaining, and after one viewing I already place it in the same league as The Place Promised In Our Early Days in my estimation. Your Name is fun though, especially in the first act. Body-swapping mayhem isn’t the most original of ideas. I’ve been seeing such hijinks in cinema since the original Freaky Friday, and one of my recent anime favourites is Kokoro Connect. Your Name plays it wonderfully for laughs though, with a lightness of touch, and deft observation of character, as well as spirited and well-defined voice actor performances. 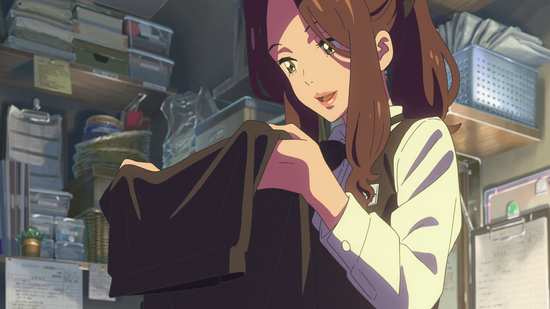 Quite frankly, this could have been a movie in and of itself, as both Taki’s Tokyo life, and Mitsuha’s home life have issues that need resolving, Taki’s relationship with a co-worker at his restaurant, and Mitsuha’s strained relationship with her father. You can see how these relationships begin to alter once the swapping begins, and new perspectives are brought to bear. There’s also the physical comedy that comes with the swaps, a suddenly feminine Taki, and masculine Mitsuha, Mitsuha’s fear of using the toilet, and Taki’s obsession with Mitsuha’s breasts. But that wouldn’t be a Makoto Shinkai movie. 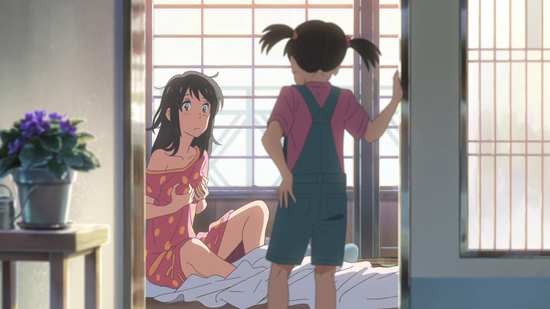 That happens when the swapping antics suddenly stop, the day that Mitsuha attends the festival and sees the comet. Thereafter, Taki becomes obsessed with finding Mitsuha, and all he has to go on are some imperfect memories of her life, and some better memories of the town where she lived. It’s here we get the momentum of unrequited love, of melancholy, and of light and dark going, and it gets particularly dark when Taki learns the history of Mitsuha’s home town. And then when he finally finds her, it’s a scene reminiscent of Doctor Who, the tenth Doctor and Rose’s final meeting at Bad Wolf bay. 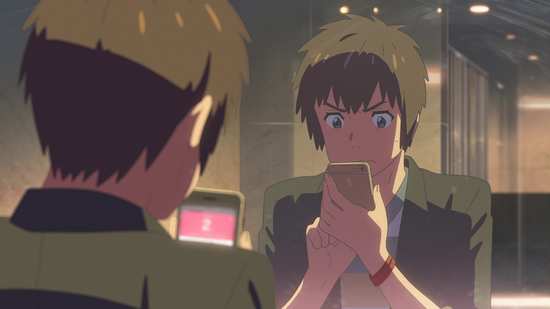 It’s the sci-fi twist to Your Name that turns a romantic comedy into a gripping, emotional and romantic drama, and again it too could have been a movie in its own right, as once they figure out why they’ve stopped swapping bodies, Taki and Mitsuha have to work together to set matters to rights, without any guarantee that they’ll remember each other once they’re done. I have to be that circumspect about the final act to avoid giving the twist away, but it’s a great, if well used plot device, and makes a good film brilliant with the way that it is executed here. 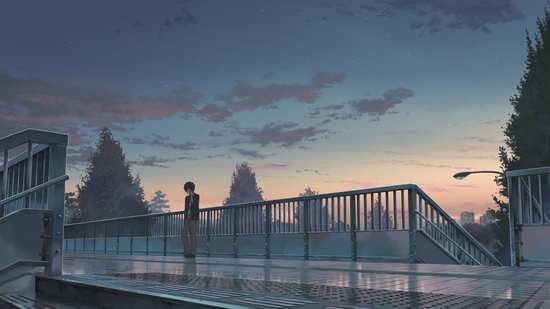 The only niggle I have with Your Name is the ending, which given the nature of this story, might actually have benefitted from Shinkai abandoning his usual modus operandi and giving us something more triumphant, and emotionally rewarding. As it is, he even ducks his usual melancholy ‘if only’ and instead gives us a lukewarm kind of, maybe, happily ever after-ish. It’s the only unsatisfying point in an otherwise stellar film. 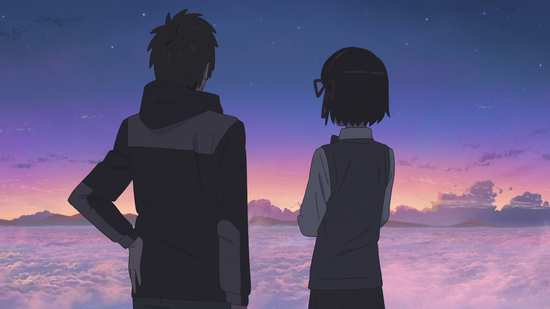 There you have it. In close formation, we’ve had three outstanding anime feature films, all of them getting deluxe treatment when it comes to home video releases. Any one of In This Corner of the World, A Silent Voice, and Your Name is worth owning, and I do suggest that you get all three; they are that good. The one niggle with Your Name is that its transfer is not up to scratch, but it looks like that will be resolved with the next manufacturing run, so get those limited edition releases early, and then swap the discs from Anime Limited when they’ve finished baking.