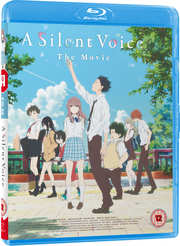 Review for A Silent Voice

The current buzzword is ‘trigger warning’. We now get trigger warnings in front of TV programmes, movies, books, ahead of university lectures and school lessons. You could say that it takes some of the joy out of discovering new stories, new ideas, but you could also say that for those people with specific traumas, trigger warnings are a useful tool. If ever an anime movie justified a trigger warning, it’s A Silent Voice, with its examination of school bullying and the ongoing consequences of such.

It’s also an unexpected title from director Naoko Yamada, better known for the K-On! series and movie, and the Tamako Market series and movie, as light fluffy, and inconsequential as they come. They are great shows though, and are indicative of a fine eye for character. That kind of detail, and KyoAni’s customary outstanding animation quality certainly bode well for A Silent Voice. Having said that, I’m embarrassed to admit that A Silent Voice actually drifted under my radar. We’ve been spoiled for anime feature films of late, and back when A Silent Voice got a theatrical run in the UK, it and In This Corner of the World, award winning features both were overshadowed by Makoto Shinkai’s Your Name. Thankfully this autumn, we get to partake of all three on UK home video. 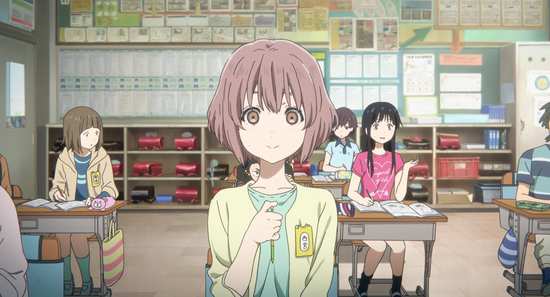 Shoko Nishimiya was the new girl transferring in to Shoya Ishida’s elementary school, only she was deaf. Having to communicate by notebook was a novelty at first, but that novelty of having Shoko as the centre of attention wore off, and the bullying started. Shoya being a typical young boy joined in, only he took it too far. Shoko eventually left the school, and Shoya was singled out by the teachers as the one responsible. That gave the rest of the class bullies a new target, and he has been ostracised ever since. He’s also been tormented by his actions as a child, and now that he’s in high school, he’s determined to make amends. He gets that chance when he runs into Shoko Nishimiya again, but coming to terms with their past isn’t going to be easy.

A Silent Voice gets a solid 1.85:1 widescreen 1080p transfer on this Blu-ray disc. The image is clear throughout, with strong consistent colours, line art unaffected by aliasing or compression, and the animation smooth and well defined. About the only issue would be digital banding, and that’s only really apparent in darker scenes (a fireworks scene is a disappointing example). But Kyoto Animation’s customary brilliance has been applied to the film, with appealing and memorable character designs, nuanced character animation, and all their usual tricks in giving the animation depth and dimension put to good use. 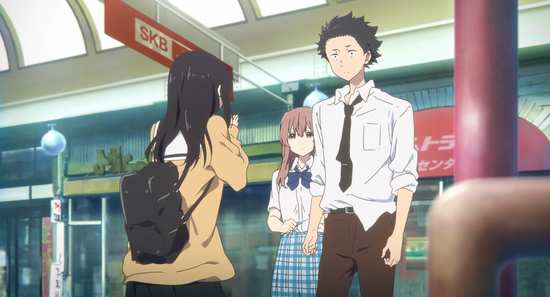 You have the choice between DTS-HD MA 5.1 Surround and PCM 2.0 Stereo, both in English and Japanese, with optional translated subtitles, a songs and signs track, and a hard of hearing subtitle track. Something has gone awry with the latter, as what should have been a faithful transliteration of the English dub dialogue, is instead merely the translated subtitles again, but with sound effects, and off-screen speakers’ names added to the captions. There is a significant difference between the translated subtitles and the English dub, which immediately becomes apparent here. Given the film’s subject matter, this is a missed opportunity. Also add to that the small size of the subtitle font, and visually impaired viewers will be impacted as well.

I went with the 5.1 Japanese track and was impressed with some great sound design, immersing you in the film, and offering an aural point of view of the characters. Shoko’s dream is a striking example. The actor performances are excellent, and convey the emotion of the film perfectly. I sampled the English dub and thought it too was strong. It’s notable that the English voice actress for Shoko, Lexi Cowden is herself deaf. 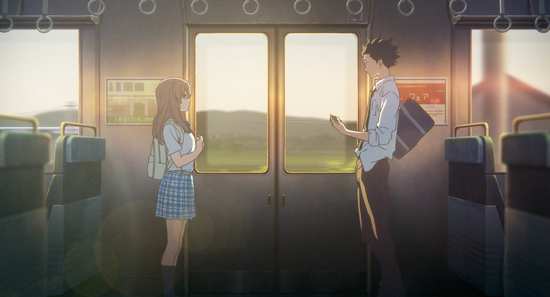 More significant are a set of interviews with the director Naoko Yamada (7:44), the character designer Futoshi Nishiya (3:36), the art director Mutsuo Shinohara (2:25), and the music composer Kensuke Ushio (4:47).

If you want more, then you’ll want the Collector’s Edition, with exclusive packaging and a 76-page booklet, as well as the film on DVD.

We really are spoiled for anime feature films this autumn when it comes to home video. I haven’t even seen Your Name yet, and I’ve already had two, must-own movies land on my desk for review. A Silent Voice is a brilliant character drama that’s told with all the lightness and thoughtfulness that Kyoto Animation can bring to bear. It takes the best of their experience in slice-of-life narratives, and applies it to a dramatic arc in such a way as to make it emotionally resonant without it ever slipping into melodrama or tragedy, which makes the story more effective as a result. A Silent Voice also has an unexpected twist in that the protagonist is both bully and victim, so we get to see both perspectives through one set of eyes, a strong example of character growth through the film. 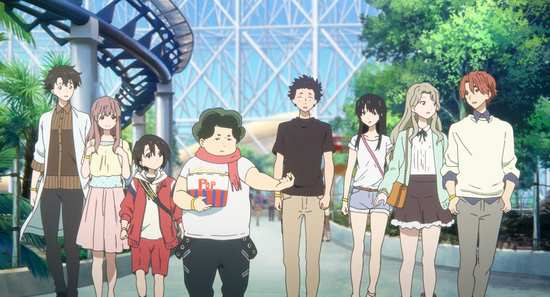 Another rare perspective in the film is making the other main character deaf, and deaf in a realistic way rather than as a plot device. With the number of eye-patch girls and the like, disability as a quirk is common in anime, but a realistic depiction of disability is rare enough to be non-existent. Shoko’s deafness is real, her need to communicate through lip-reading or sign language is real, and the ostracism she suffers because of her difference is very real. Depicting minority groups in a way that feels genuine without trivialisation is something that I’ve seen anime do just once in my experience, and I have to admit that making a connection between A Silent Voice and Wandering Son was unexpected.

A Silent Voice is really about the examination of bullying and the effect it has on people, even long after the event. Given that it’s likely that everyone has been in or around a situation where bullying has occurred, A Silent Voice could prove to be uncomfortable viewing. That A Silent Voice manages it with Kyoto Animation’s customary lightness of touch and humorous outlook, actually makes it all the more effective when things get dark. Actually the film starts off in a deceptively dark place with protagonist Shoya settling his affairs and then heading to a tall bridge, before deciding another path, that of finding and reconciling with Shoko. 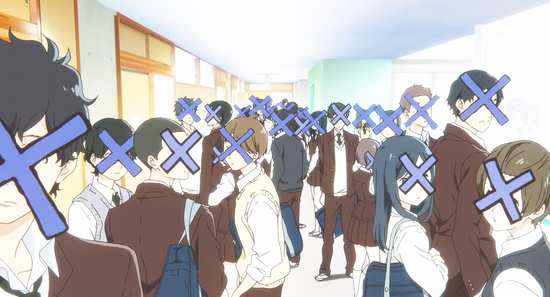 Bullying in elementary school comes with ignorance, and fear of difference, as well as fear of loss, and what happens to Shoko is all too familiar. She’s deaf for one thing, and as soon as she starts the class, she’s the centre of attention with her notebook. It’s a novelty at first, but then it starts looking as if she’s hogging the spotlight, and then the teasing starts, which then becomes bullying. And Shoya being something of a show-off joins in, takes the lead, and then takes it too far, eventually forcing Shoko to leave. What stands out most strongly here is the incompetence of the teacher, who at that point singles Shoya out and blames him for all of the bullying that was directed to Shoko, and effectively endorses the rest of the class when they turn their vindictive attention to Shoya instead. That’s one moment that effectively wrecks the rest of his life.

Years later when he’s in high school, he’s become something of a mirror image of Shoko. Her literal deafness is matched by his psychological isolation. He can’t look anyone in the face, can barely register their existence. The film’s conceit in showing this is by presenting these people with blue crosses on their faces from Shoya’s perspective. The guilt of his actions as a child has weighed on him, to the point that he’s actually learned sign language himself, and when he does encounter Shoko again, it seems like the start of a more positive relationship. But it turns out that merely saying sorry isn’t enough to heal the trauma of childhood bullying, either for the bully or the victim, and there a lot more in the way of issues that need resolving, especially as there were more people involved. 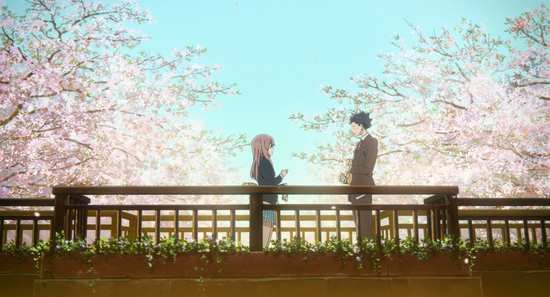 A Silent Voice is an effective, moving, and heart-warming story that takes you on an emotional rollercoaster. But there are a couple of aspects to the film that have the scent of movie magic, contrivances to make the story work, which threaten to veer off into schmaltz territory. The first thing is that Shoya’s isolation is a little overcooked. He has an older sister. We see her little daughter Maria, we even see her husband on a couple of occasions, but she’s hardly a presence in the film. This does have the effect of making Shoya seem more alone than he actually is. The second thing happens in the third act, one of those life-threatening injuries followed by miraculous recoveries that films love, but never happen in the real world. It’s at moments like this that the movie magic does threaten to overwhelm the message, but thankfully the film opts for a more realistic conclusion than the ‘happily ever after’ you might have been led to expect.

These are teeny-tiny niggles in an otherwise impressive, important and entertaining film. Kyoto Animation and Naoko Yamada’s light touch on this often distressing topic actually makes it more effective and meaningful. The darkness becomes starker in the light, and because A Silent Voice is so entertaining, it stays in the mind longer, provoking meaningful thought. This is definitely an anime film for your collection.