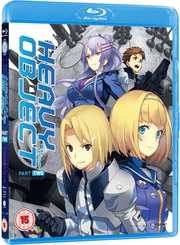 I certainly had criticisms of Heavy Object based on its first half. The premise was absurd, the fan service was ridiculous, and for a war show, it lacked in dramatic tension. But Heavy Object made up for all this with outstanding and detailed animation, with a sharp and witty, well-written script, and by simply being so much fun to watch. When you have that much fun with a show, you naturally look forward to the second half, only with All the Anime’s schedules being what they are, I’ve had to wait six months to get my paws on the second half of the show. And now as I write this, it’s just had another two month delay added on! Sometimes a little anticipation whets the appetite, but sometimes a wait can just be frustrating. With Heavy Object, it’s definitely a case of the latter.

In the not too distant future, despite the advances of human civilisation, war still exists, although the nature of warfare changed once someone invented the Objects. These are the ultimate expression of the tank, gargantuan, spherical weapons platforms that are so strongly armoured, that they can survive a nuclear explosion and still be able to fight. All it takes is one Elite Pilot and an Object for a battlefield to be dominated. War has become refined into a battle between Objects, while the rest of the military’s role has been reduced to supporting those Objects. If a battle is lost, the convention is to simply surrender and retreat, leaving the territory to the victors. 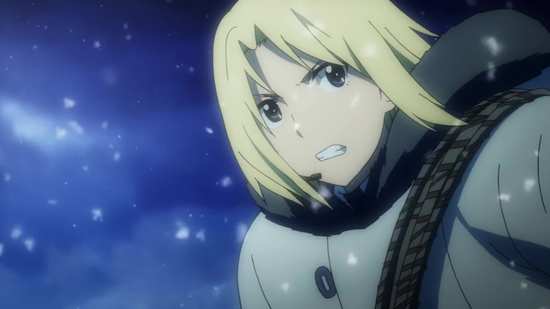 That is the convention, but that turns out not to be the reality in a battle between two Objects in Alaska, the Baby Magnum versus the Water Strider. The Baby Magnum is piloted by elite pilot Milinda, and on her support crew are Qwenthur and Havia. When the Baby Magnum is destroyed, and Milinda ejects, they think it’s over, that all they have to do now is retreat, but the Water Strider continues its attack, the forces behind it intent on destroying their foes at any cost. At the last minute, Qwenthur, Milinda and Havia manage to figure out a way of destroying the enemy Object. They’ve upended conventional thinking, they’re heroes, and Qwenthur and Havia in particular think that they’re on the road to fortune and fame, and a quick way out of the army. They’re wrong. For now that they’ve destroyed one Object, the Army wants them to keep on doing it!

The conclusion of Heavy Object is presented here across two Blu-ray discs, the concluding twelve episodes. I was mistaken with Part 1, and there is no DVD release of this in the UK. 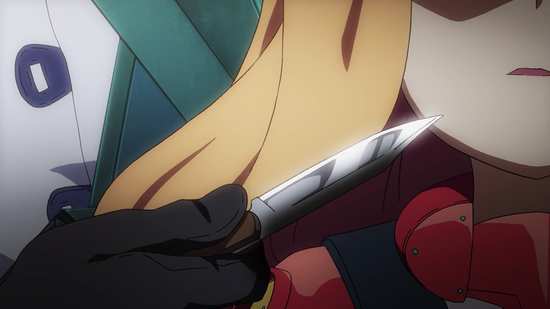 Heavy Object gets a 1.78:1 widescreen 1080p transfer on these Blu-ray discs. It’s a splendid transfer, presenting the animation as clear, sharp, and with strong, consistent colours, with no visible signs of compression, or even noticeable banding. It’s just what you’d expect from a digitally sourced animation. It’s good too, as Heavy Object has a lot going for it when it comes to the animation, likeable character designs, a nice semi-futuristic world design, and some very strong and detailed animation. The Heavy Objects themselves aren’t exactly eye-catching, just gargantuan spheres armed to the teeth, or variations thereof. For a show about war, there’s a whole lot of fan service to contend with however.

The images in this review were kindly supplied by the distributor. 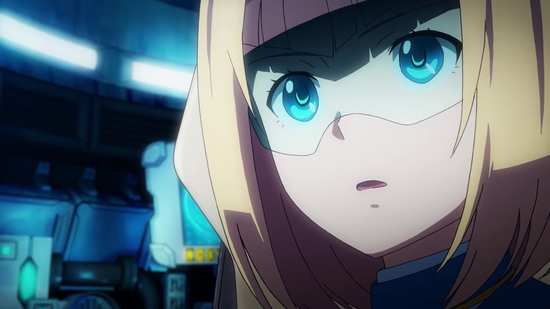 You have the choice between Dolby TrueHD 2.0 Stereo English and Japanese, with subtitles and signs locked to the appropriate audio track. Given that this is such an action intensive show, it’s a bit of a head-scratcher that Funimation didn’t give the English dub one of their usual 5.1 re-workings. I went with, and was happy with the original language audio, the subtitles were accurately timed and free of typos, and the casting once again proffered the expected voices for the archetypal characters. I merely sampled the dub to check that it exists. It does.

Disc 1 autoplays a trailer for Ghost in the Shell: Innocence.

Disc 2 autoplays a trailer for Steins;Gate The Movie.

Finally you get the textless credits and trailers for Appleseed XIII, Blazblue: Alter Memory, Attack on Titan Junior High, and Tenchi Muyo: War on Geminar. 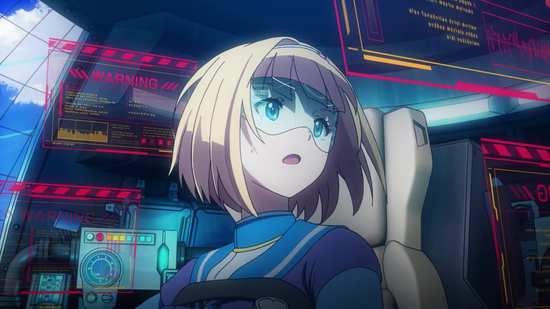 I really love this show. I may have been non-committal about Part 1, citing more than a few reservations, but I find that I enjoyed this second part even more than the first part, as I’ve since realised just what it is about Heavy Object that I find so appealing, and can at last justify giving it the acclaim that it deserves. Don’t get me wrong, the flaws that I mentioned in my review for Part 1 still exist, are still apparent in Part 2, and are in no way mitigated. It’s still an utterly daft and unrealistic concept, which if you give even the slightest bit of thought and consideration to makes the whole thing fall flat, it still has so sense of peril, and very little drama for its main characters, no matter how many nameless extras are racked up in the show’s body count. And it still has that wholly egregious fan service with its female characters, the camera slowly panning up and down their unrealistically voluptuous bodies (I’m surprised there’s no panting and wolf whistles).

It took a few months after reviewing Part 1 for my thoughts about the show to really crystallize, and it took a major dose of nostalgia to do that. You see, a few months ago, the Spike channel started showing re-runs of The A-Team. Loads of action, great characters, absolutely no sense of peril for the main characters (or indeed any of the villains), and even a little fan service from time to time; Faceman did have a reputation to uphold after all. Most importantly, there was a whole lot of invention to the A-Team’s plans, and there were plenty of big explosions, and cars flipping over. It was unrelenting entertainment when I was a kid, and it’s held up pretty well over the last thirty years. Most pertinently, the type of entertainment, the sense of joy and fun that I have watching the A-Team, is exactly the same joy and fun that I have watching Heavy Object. 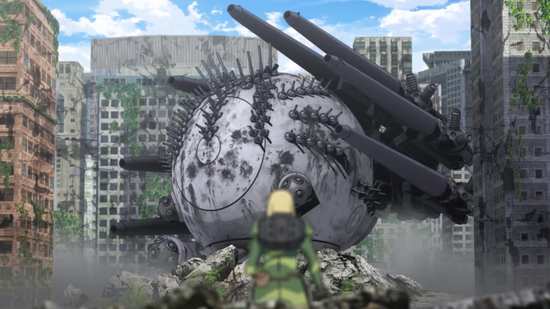 The premise of a quarter-million ton Objects doing battle at speed, without sinking through the Earth’s crust is just as plausible as emptying four machine guns without hitting a single target and winning on a weekly basis. Against all conventional doctrine, trainee engineer Qwenthur, and his soldier friend Havia come up with a means of defeating an Object without using another Object. Once they’ve accomplished that, they’re expected to do it again and again, while coming up against those critics that refuse to believe that doctrine can be overturned. Havia and Qwenthur have a lot of fun in what they do, how they approach life, as well dealing with their well-endowed commanding officer Frolaytia. These are characters that refuse to take things seriously, and it’s that frivolous approach to life and adversity that makes Heavy Object a great piece of entertainment, rather than weighty and realistic drama. 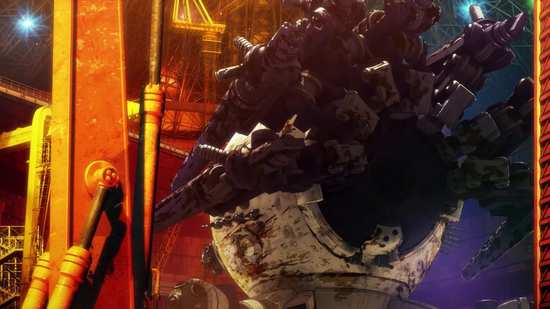 What makes Heavy Object so much fun is that the writers really got to grips with the tactics and strategy of human versus Object combat. Each story has a different mission for Havia and Qwenthur to accomplish, with the aid of Milinda and her Baby Magnum Object. In this collection it varies from killing an enemy genius engineer, setting a trap for an enemy Object, destroying an enemy coal mine, protecting a city, or overseeing a hostage exchange. It’s the variety and invention with which Qwenthur and Havia overcome their obstacles that makes the show gripping, the rich diversity of characters in the show that make it so enjoyable.

Things would get serious in the A-Team, once a season or so when the producers ran out of money, and they needed a clip-show. One of the team would get shot, and while his life hung in the balance, flashbacks to happier times would ensue. They usually were the weaker episodes. Heavy Object gets serious too, but the quality doesn’t dip. The Coal Mine story has a hint of darkness to it, with betrayal from their own an element in the story, but the real serious tale is left, quite rightly for the show’s conclusion, the final two episodes that sees our heroes once more placed in peril, but the question of their survival finally up in the air. While you might have been certain that they would have made it through the earlier stories, that certainty is gone, not least because it’s the final story in the series, but also because events prove that they are actually mortal. 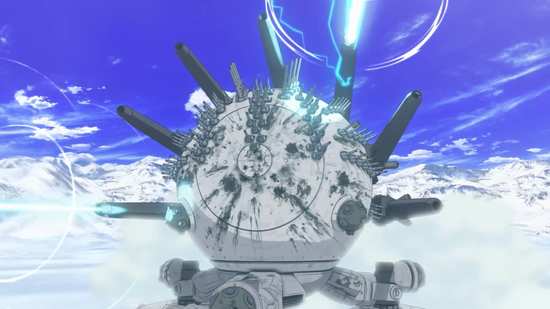 This series is being sold as Season 1 in the UK, which implies a season 2. Alas I haven’t been able to find any sign of a second season, or even confirmation that it’s in production. That’s a shame, as this show was so much fun that I would love to see more.