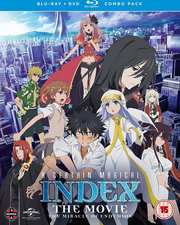 A Certain Magical Index: The Movie The Miracle of Endymion (Blu-ray Details)

Review for A Certain Magical Index: The Movie The Miracle of Endymion

I do like the Raildex franchise, not least for the quality of its storytelling. With most light novel adaptations seeming just as formulaic and hackneyed as the average manga adaptation, the Raildex series stand out as shows that offer both variety and emotional depth in the stories that they tell. Having said that, I do prefer A Certain Scientific Railgun to the original Magical Index. Alas, it’s the latter that gets transferred to the big screen, and taking a leaf from the long running shonen action series which get movies, The Miracle of Endymion could be described as filler, with a story built around a one-off guest character. Still, there are some shonen film spin-offs that actually turn out better than the series that spawned them. Hopefully the Magical Index movie will turn out to be one of the good ones. 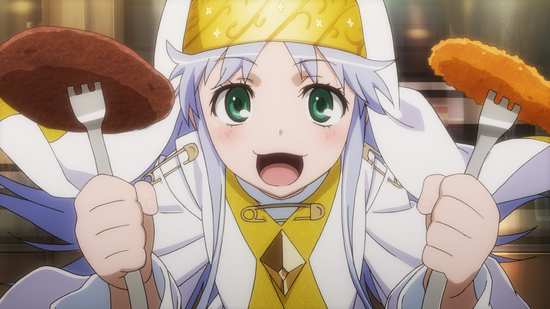 Academy City is one of those sprawling metropolises that we often see in anime, devoted solely to education. Its remit is to educate, and develop science to the point that it manifests esper abilities in students. So it is that when Toma Kamijo interferes with a couple of yobs hitting on a cute girl in a cafe, he’s not coming to the defence of the girl. It’s the yobs that need protecting from Misaka Mikoto’s Railgun ability. So naturally she comes after Toma for spoiling her fun. Toma might not have any special abilities in the conventional sense, but he does have the ability to negate other people’s powers and abilities with his right hand, which is why he survives long enough to get back to his apartment. 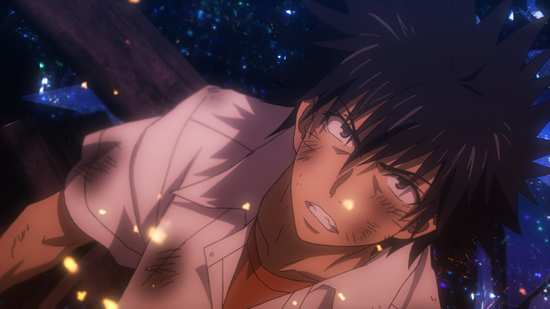 And that’s where he finds a young nun hanging off his apartment balcony. She’s confused, she’s hungry, and she’s on the run. Her name, Index is apt given that she’s a walking repository of 103,000 magical tomes and grimoires, and there are a whole lot of sorcerers and magicians hunting her down for that arcane knowledge. But there’s no such thing as magic, at least that’s what Toma believes, brought up and educated to believe in science alone. But it turns out that his right hand can dispel magic too, when it dispels the magical vestments that this Sister is wearing. When magic and science collide, the world’s about to get a whole lot more interesting! 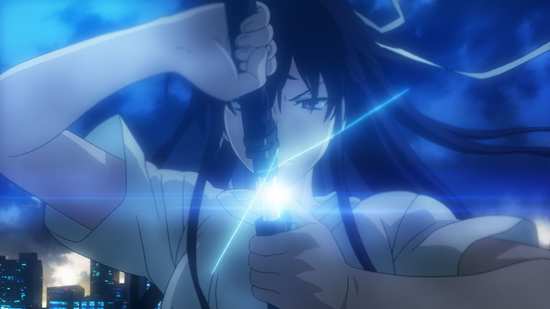 Three years previously, a spaceplane crashed in Academy City, but in a miracle, all 88 passengers and crew survived. However, that did accelerate the construction of Endymion, a space elevator located in the city. Now access to orbit will be safe and efficient. The day for the grand opening has almost arrived, and performing at the opening will be Arisa Meigo, a busker plucked from obscurity, and given the grandest stage to make her debut. Toma and Index first encountered her performing on the streets, and the three quickly became friends. But when Stiyl Magnus and his group attack Arisa, it becomes clear that Arisa’s voice holds a power that might instigate a war between the Scientific World and the Magical World. 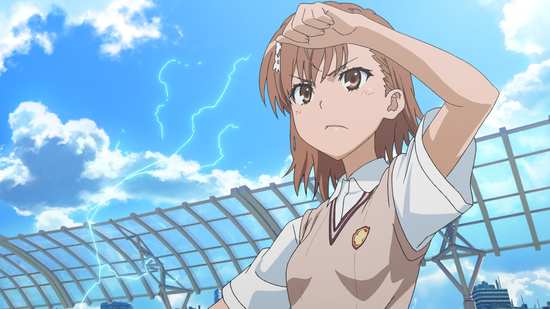 One thing that is a definite improvement over the two series is the animation, which now looks as if it was animated natively at 1080p, instead of scaled-up. It’s on a par in terms of clarity with Railgun Season 2, but it gets a theatrical level of detail, an upgrade in the world design, and in the of atmospheric visual. The animation is pretty nifty too, offering much in the way of Raildex goodness when it comes to the characters and action sequences. One chase sequence pays serious homage to Tron though. There’s a little disappointment when it comes to the audio, which is given the usual Funimation treatment for their TV series of Dolby TrueHD 5.1 Surround English and 2.0 Stereo Japanese, with locked subtitles and signs. Usually theatrical features get 5.1 Japanese as well, and although Prologic does its best, you do miss the full surround treatment when it comes to the action. The dialogue is clear, and the subtitles are accurately timed and free of typos. 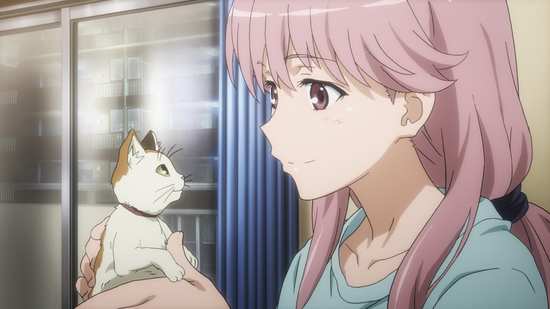 Other than that, you get six varieties of trailer, promo video, or TV spots. 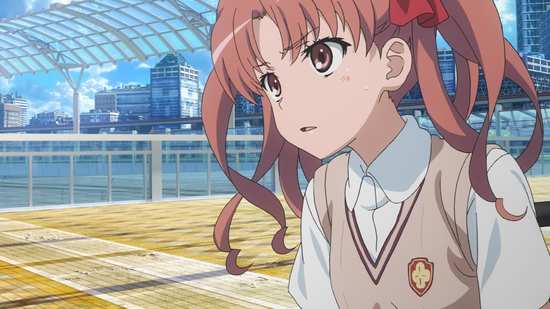 I may have drawn a hopeful analogy between this light novel series adaptation and its movie spin-off, and shonen series and their spin-off movies, but in the end The Miracle of Endymion goes the other way, and delivers a movie that feels like a poor shonen movie spin-off, pure filler compounded with the aspects of A Certain Magical Index that give me the most pause. That’s despite the story here having much in common with Bleach: Memories of Nobody, probably my favourite shonen movie spin-off. 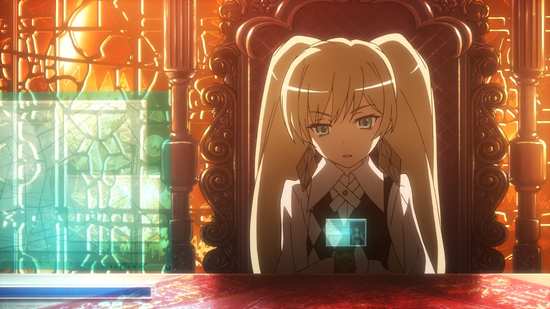 The similarities come in the guest character, Arisa Meigo, the busker who hits the big time in this film, a Level 0 girl who like Toma has an amazing ability nevertheless. Against all logic, Toma’s right hand can cancel out both esper and magical abilities, and with Arisa, it’s her singing voice that can apparently create miracles, although the exact nature of her ability is never really satisfactorily explained in the film. But, someone who can invoke miracles sends shudders through the magical world (which in Raildex equates to the world of religion), and they are provoked into action. 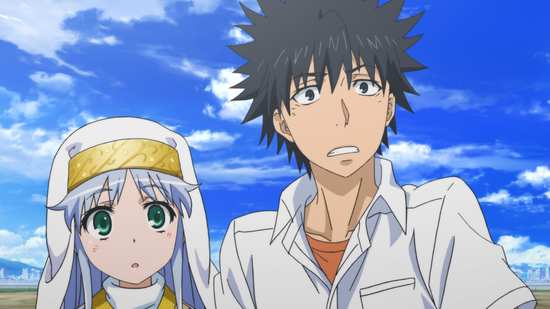 Academy City sends a group to defend her, the Black Crows Force (not Antiskill or Judgment but someone new and unique for this film), and we get to meet the other guest character, Shutaura Sequenzia, a skilled agent, but one who has no appreciation or tolerance for any kind of music, which immediately makes her antipathetic to Arisa. And then the penny drops and it is revealed that both Arisa and Shutaura survived that spaceplane crash, and the wheels of the story are set in motion. 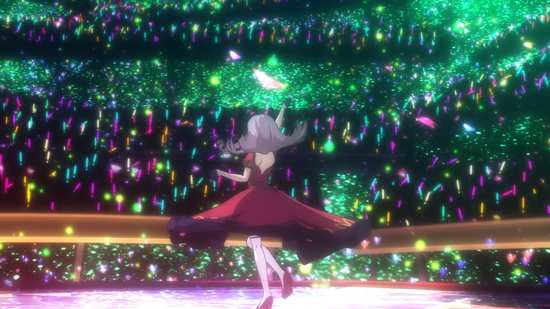 The third major character in this story is Ladylee Tangleroad, chairman of the company behind the space elevator, and whose plans for the opening ceremony go far beyond simple celebration. It’s the motivation behind the story, and naturally leads to the film’s dramatic, and action packed climax in orbit at the top of the elevator. 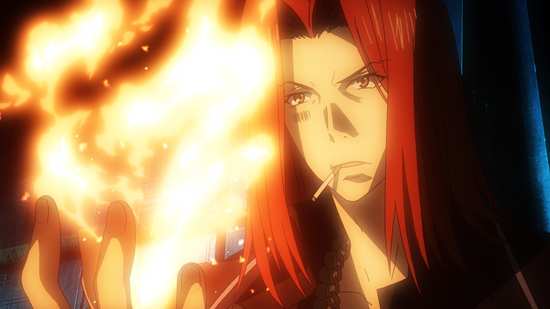 This has all the hallmarks of an interesting, and exciting story, but The Miracle of Endymion manages to drag it all down into a forgettable and leaden film, which is majorly scuppered by what is my biggest bugbear when it comes to Magical Index, that of weak main characters. In the series, I have never felt as if Toma or Index were emotionally connected to the stories that they were part of. Crazy things happen around and to them, and they seem to coast their way through the stories, unaffected in any real way. That emotional disconnect between character and story continues in the film, so much so that you wonder whether they actually care about their new friend Arisa or not. Certainly the conclusion of the film led me to think otherwise. And once again, the whole thing is solved by Toma punching a girl in the face. If he was a superhero, he’d be Captain Misogyny! 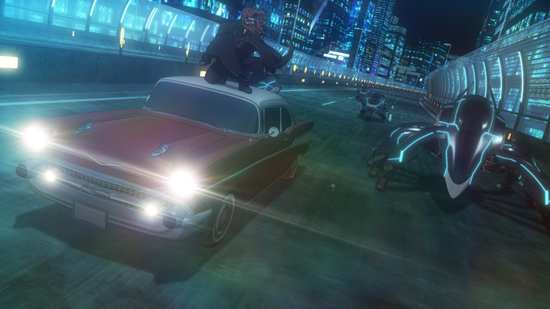 The second thing is that the story is wholly diluted by what seems to be a contractual obligation to get all of the Magical Index and most of the Scientific Railgun characters on screen, even if it’s only for a thirty second cameo. The story doesn’t need characters like Last Order or Accelerator, the Misaka Clones, or Kongo to work. They are only there as sweeteners for the long-time Raildex fans, but in the end there’s just too much sugar in this pudding, and the story gets lost as a result. 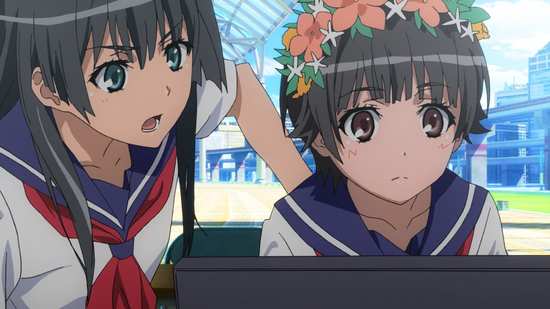 What could have been a good feature film spin-off turns out to be just as desultory as the average shonen spin-off movie, but in this case it’s doubly disappointing, as Raildex has made its name with top quality storytelling. That’s even true in my least preferred Magical Index, where the stories usually compensate for weak and un-engaging characterisations. Not this time though. The Miracle of Endymion is for fans only, and forgiving fans at that.