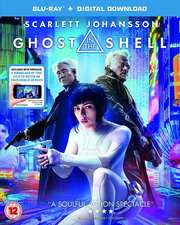 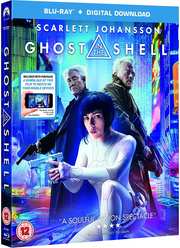 The stupidest thing I have encountered in recent years is the ‘whitewashing’ controversy when it comes to the Ghost in the Shell movie. “How dare they cast Scarlett Johansson as a Japanese character!” was the rallying cry of a million keyboard warriors as they jumped aboard the PC bandwagon, without ever reading a single panel of the manga, watching a single episode of the anime, or any of the anime feature films. Motoko Kusanagi is a full body cyborg, an enhanced cyberbrain implanted in a wholly synthetic body. The body can be anyone or anything. If you’ve seen the Solid State Society movie, you’ll have seen The Major ‘driving’ several bodies, male included. What’s more, in the anime and manga, her origins are deliberately obscure, original human identity, name, all left to the imagination, and indeed various incarnations of the anime have offered differing and conflicting back-stories for the Major. Really, the casting for the role can be as versatile as that for Doctor Who these days. Literally anyone could play the role. And putting the Major to one side, the live action Ghost in the Shell movie turned out to have one of the most diverse casts in a modern Hollywood picture. 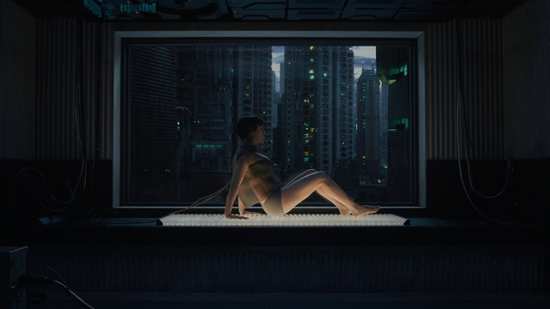 Still, this is a Hollywood adaptation of a manga/anime, and notoriously these things never end well. It’s a sad state of affairs when you’re hard pressed to come up with a better anime adaptation than The Guyver movie. The story usually gets lost in a dumbed down translation, while the identity of the piece is lost in the localisation process, usually where accusations of whitewashing are actually justified. Ghost in the Shell has in its favour a truly cosmopolitan setting, a universal sci-fi story that has been inspired by the best cyberpunk, and has itself gone on to inspire movies like The Matrix. It’s a hard title to get wrong. On top of that, Ghost in the Shell gets reinvented each time it’s made. The Mamoru Osshi movies were philosophical pieces that were unlike the original manga. The Kenji Kamiyama TV series offered a weekly dose of cyberpunk police procedural, while the Arise films went in another direction, offering an origin story for Section 9. The forthcoming new television series might kick things off yet again. So the Hollywood feature has no obligation to be faithful to continuity. It can happily re-invent the wheel, as long as it gets the basics right. But as I’m often reminded, you should never underestimate Hollywood’s ability to screw things up. 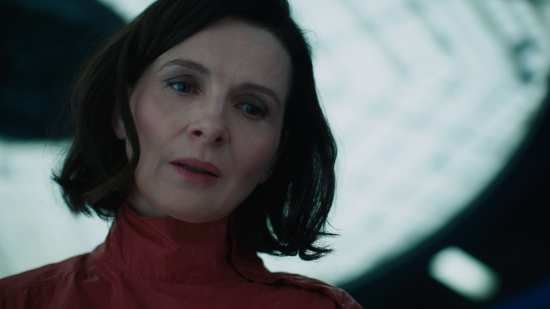 It’s a cybernetic future. Man and machine are blending into one, and it’s a rare person who doesn’t have an implant of some kind. But in this future, Mira “Major” Killian is the first of a new kind of cyborg. Barely surviving a terrorist attack, her brain was transplanted into a fully synthetic body. Now she works for Section 9, an assault team that specialises in fighting cybercrime. As she struggles to reconcile her artificial nature with her humanity, a series of murders of Hanka executives, the company that created her, leads her and Section 9 to investigate her own past and the notorious terrorist Kuze. 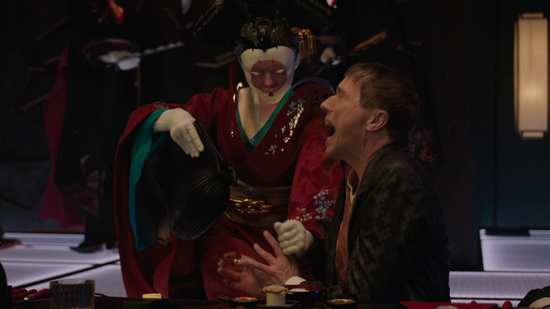 I saw some glitches in the image! Then I realised that it was a hologram in the story that was glitching, not the transfer. Nothing to complain about here! Ghost in the Shell’s 1.78:1 widescreen 1080p transfer is perfect. The image is clear and sharp, colours are robust and rich, and the levels of detail are excellent. If you want more than this, you’ll have to go for the 4k disc and take advantage of the HDR coding. The film goes out of its way to recreate scenes from the anime, and it gets the iconic look of the story right, bringing to life a futuristic Hong Kong that is a blend of the anime, and the product placement hologrammatic cornucopia of Blade Runner’s Los Angeles. The effects are seamless, the production design excellent, and as a cinematic future world, Ghost in the Shell’s instantly creates an iconic landmark. 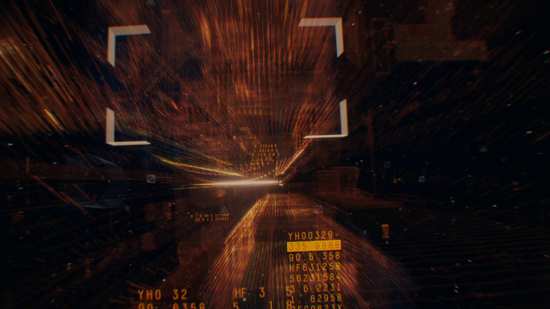 I can be just as effusive about the film’s audio. The Dolby Atmos English track (of which I can only play the core Dolby True HD), does full justice to the film’s sound design, the action, and the music (Kenji Kawai’s unmistakeable theme graces the end credits). The dialogue is clear throughout, the surround is put to excellent use, enveloping you in the action, and the bustling urban high rise metropolis of Hong Kong. A neat touch is that Aramaki’s dialogue is in Japanese, with subtitles burnt into the print. You can imagine in a cybernetic world, you’d instantly get those subtitles flashed onto your retina whenever you spoke to someone foreign to you. You also get audio tracks in DD 5.1 English Descriptive, Spanish, French, Italian, Japanese, and Hungarian, with subtitles in these languages and Danish, Dutch, Swedish, Finnish, and Norwegian. I am going to have to watch this film in Japanese, as Akio Ohtsuka, Atsuko Tanaka, Rikiya Koyama, and Kouichi Yamadera are cast in the same roles in the film that they played in the anime. 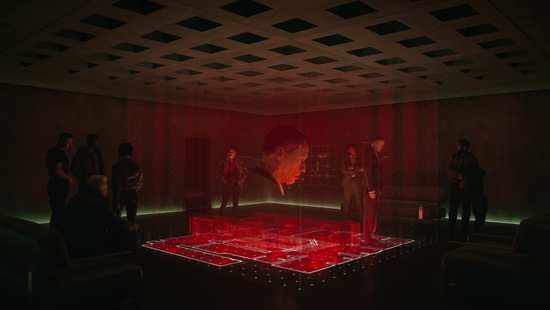 You have one disc in a Blu-ray Amaray case, with the artwork replicated in a shiny o-card slipcover. You also get the requisite digital copy code.

The film is presented with an animated menu, and press pause and you get a pop-up progress bar.

There are three featurettes on this disc. 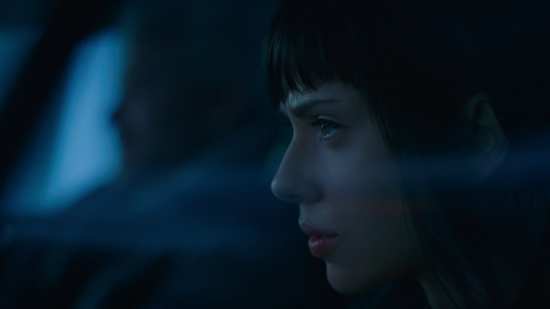 All are in HD, and look at the making of the film with clips, and interviews with the cast and crew (You’ll need to flick the subtitles on when Takeshi Kitano is interviewed). There are also plenty of snippets of the anime, ensuring Manga Entertainment get a few shekels worth of royalties. 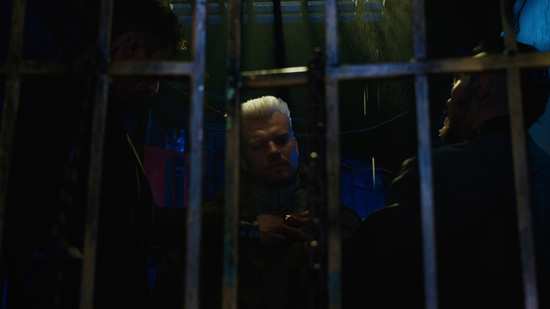 I watched the first trailer for Ghost in the Shell and was thrilled. It was a collection of scenes that faithfully recreated iconic moments from the anime feature film in live action, and it looked as if it was getting everything right. Certainly it caught the attention of the fans. Then I saw the second trailer and had the reverse reaction. This time it showed us what the story would be about, and it turned out that the story would be a remake of Robocop. Given that Robocop itself had just received an absolutely pathetic remake, I began to expect the worst from Ghost in the Shell. 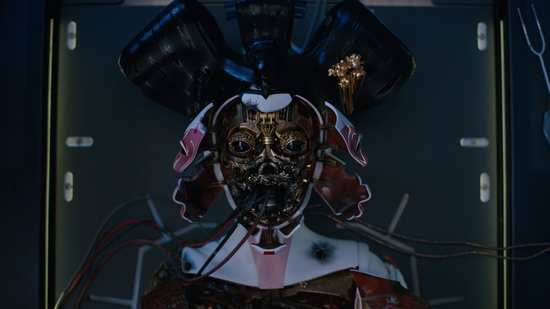 Last night, my fears were confirmed. Ghost in the Shell does indeed recycle the story from Robocop. However, the movie isn’t bad. Don’t let the critics put you off, as Ghost in the Shell is pretty decent, a solid, action packed, cyberpunk movie that thankfully is closer in quality to the original Robocop than its lamented remake. It doesn’t hurt that the film wears its influences proudly, paying homage to all incarnations of Ghost in the Shell. It isn’t only in terms of the visuals, as you can find story elements from both of the Mamoru Oshii movies, both seasons of Stand Alone Complex (not least the villain Kuze), and although it isn’t acknowledged in the extras, it seems that the Major’s ambiguous past pays homage to Ghost in the Shell: Arise too. This film certainly pays dividends if you’re a fan of the franchise, and it’s notable that it did a whole lot better in Japan than it did in the West. 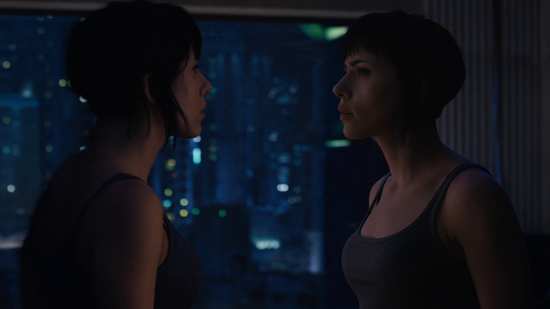 The thing about the Robocop story is that it is tried and trusted; it works. So having the Major drawn into discovering her own past when a series of murders leads Section 9 to investigate Hanka Robotics, the company that created her, makes for a gripping narrative and an engaging mystery. Ghost in the Shell tells that story well, it’s paced adroitly, offers enough in the way or revelations to keep you interested without indulging in exposition for the sake of exposition, and it takes the space to develop its characters as well. It’s a well put together and entertaining story. Scarlett Johansson has made something of a career of playing kick-ass females, and having recently seen Lucy, I was once again setting my expectations low, but she manages to nail the professionalism, inner torment, and naivete of the character well. The supporting cast is effective too, although of Section 9, really only Batou (Pilou Asbæk) and Aramaki (Takeshi Kitano) stand out. Kitano still epitomises cool on screen. He gets the best line in the movie, and it’s in Japanese! 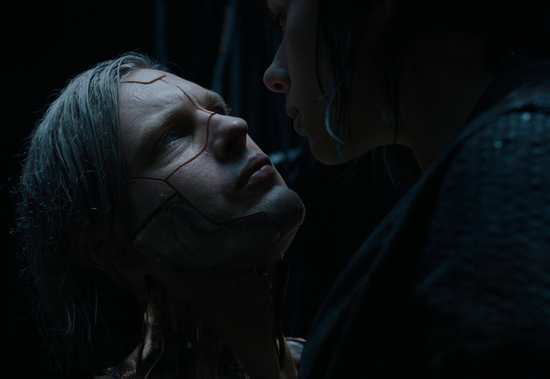 However, there are justifications for saying that Ghost in the Shell has dumbed down the story, although not quite to the levels that Ghost in the Shell: Arise did. For one thing, dropping the indefinite article from ‘Major’ just makes it sound stupid. It’s not a name, it’s a rank. The second thing is that we have to see the brain. In the anime, cyberbrains are wholly enclosed units, plug and play, and presumably containing the shock absorption that allows for being picked up by the head by a giant robot, or going from the penthouse of a high-rise to the ground floor without use of elevator or stairs. But apparently we’re not smart enough to know something is a brain without seeing ‘brain’. It’s also rated a 12, and consequently the violence can appear bloodless and cartoony. It could have used being as edgy as the original film. 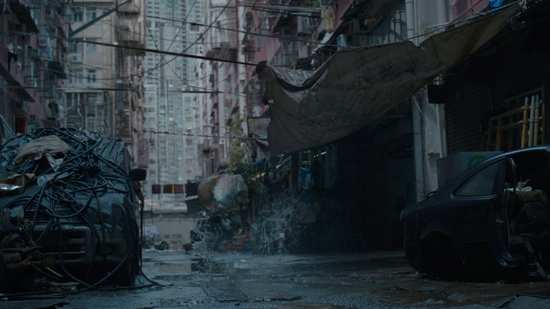 I do keep coming back to the Robocop storyline. I can understand why they went that route, in a movie that introduces and develops The Major as a character, to make the story about her as much as possible. And you could say that it makes a point about human trafficking and exploitation. But there are so many other stories out there, not least in the Ghost in the Shell franchise itself. If they were going to use Kuze, they ought to have gone the whole hog and adapted Individual Eleven, a story about illegal immigration, about terrorism, about nuclear brinkmanship, and with a version of The Major’s back story. Come to think of it, 2nd Gig is even more relevant in today’s geopolitical situation than it was 12 years ago. 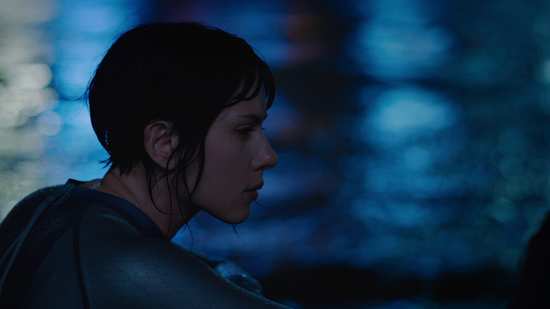 The live action Ghost in the Shell movie could have been much better, but it’s nowhere near as bad as you’ve heard. In fact, this is probably the first decent live action adaptation of a manga or anime from Hollywood. It’s worth getting if you’re still interested in as petty a concept as reference quality discs, but there is actually more to this film than the critics would have you believe. Unlikely as the prospect is, I’d actually like to see more of this interpretation of the Ghost in the Shell universe.