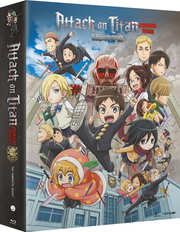 The short form animation is making more and more of an impact these days, especially on Western shores. There are plenty of anime out there that run to just 2 or five minutes; Crunchyroll has plenty of them, but when it comes to home video, we tend to get the half hour episodes. Not that we don’t see short form, as many shows, especially those that are darker and more serious, save a minute or two at the end to have fun with short versions of their characters in lighter situations, shows like Ghost in the Shell with its Tachikomatic Days, the GunXSword puppet show and so forth. Sometimes the manga itself or the show will spin-off a comedy that exceeds the bounds of a post-credit sting, and will warrant a series of its own. I’ve seen shorts for Your Under Arrest, the Haruhi-chan and Nyoron Churuya-san shorts from The Melancholy of Haruhi Suzumiya, the Rock Lee series spun off Naruto, and the Adventures of Mini-Goddess. Attack on Titan on the other hand has managed both. The series came with the Chibi Theatre: Fly, Cadets shorts lasting just a few minutes that would have slotted in after the episodes aired. But then the manga itself spun-off a comedy series, this Attack on Titan Junior High story, which re-imagined short versions of the characters now attending a school with the Titans, where the beasts kept stealing their pack lunches. This too begat an anime, the show I’m reviewing now, although its episode runtimes at 17 minutes, are pretty close to full length. 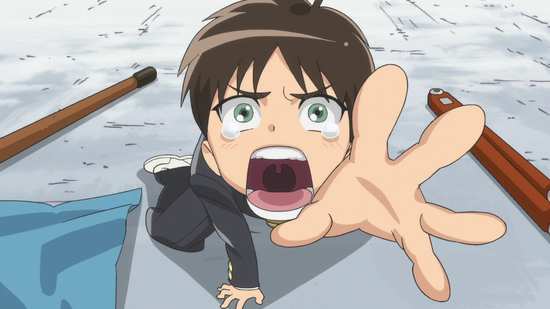 Eren Jaeger suffered an egregious trauma in his childhood. A Titan stole and ate his packed lunch, and he’s held a grudge ever since. That grudge will only intensify now that he’s starting Junior High. His new school is co-ed. Humans go to school alongside Titans, and being late to school and going to the wrong campus is not actually the worst start to the day. That comes a little later, when the students assemble to be addressed by the Titan headmaster. And then the Titan students en masse steal and devour all of the human students’ pack lunches, including Eren’s beloved Cheese Hamburg steaks. This means war! 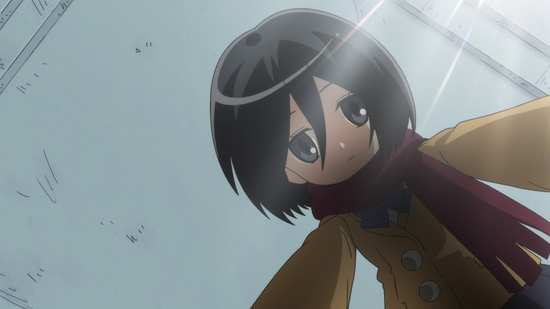 Twelve episodes of Attack on Titan Junior High are presented across two discs from Funimation. The show is also available on DVD. 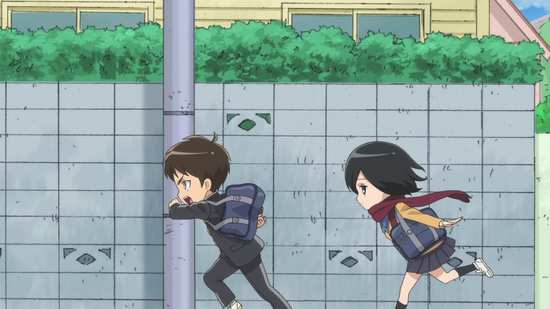 Attack on Titan Junior High gets a 1.78:1 widescreen 1080p transfer on these discs, and as it’s a nice, bright, shiny comedy show, there’s no dark, complex, or moody imagery to increase the likelihood of compression artefacts or digital banding. The show looks great, very appealing, with smooth animation. Given that it’s a comedy spin-off, the chibi versions of the familiar characters are all present and correct, and even the Titans manage to attain a degree of cuteness that they didn’t have in the original show. 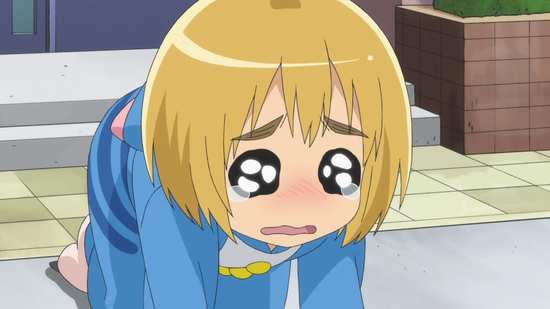 You have the choice between Dolby TrueHD 5.1 Surround English, and 2.0 Stereo Japanese, with subtitles and signs locked to the appropriate tracks. The first thing that you’ll notice is that there are no song subtitles for the opening theme. The second thing is that you’ll need to whack your volume control well past halfway to get a decent level from these discs. With both English and Japanese you get a good degree of voice actor continuity, although I suppose there’s some relaxation in goofing off with characters, where there was usually more screaming and dying. It’s a decent enough audio track, no glitches or dropouts, and with the stereo giving the show’s action and comedy sufficient space to breathe. I like the school-chime reworking of the Attack on Titan opening theme, and it’s a shame that it’s not subtitled, although there is an unexpected upside to that. The subtitles themselves are timed accurately and free of typos. 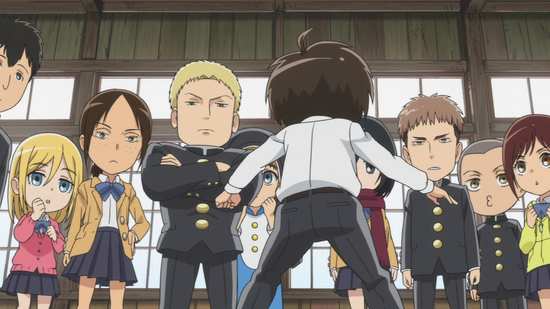 There is a commentary on episode 2 from ADR director Mike McFarland, Trina Nishimura (Mikasa), and Josh Grelle (Armin). 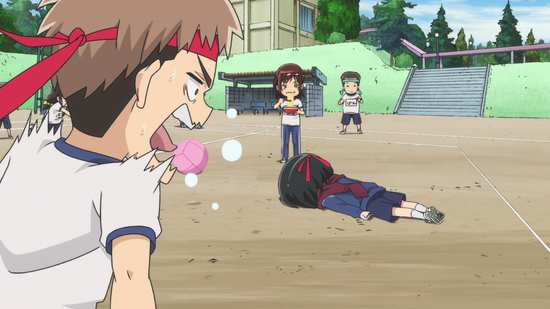 You get a video commentary from Mike McFarland, Trina Nishimura, and Josh Grelle.

You get the textless credits, albeit with locked subtitles. That upside I was talking about occurs here, as for once we get genuinely textless opening credits as a result of the opening not being translated.

Finally there are trailers for Attack on Titan, Scrapped Princess, Heavy Object, The Disappearance of Nagato Yuki-chan, and Fairy Tail Part 22. 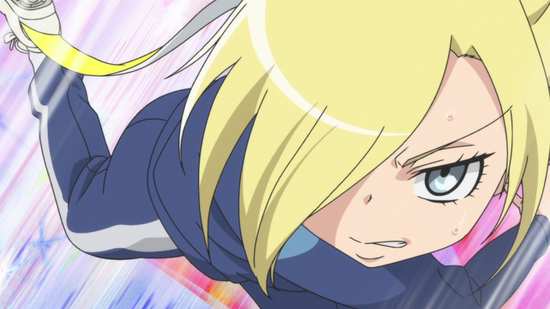 Spin-offs like Attack on Titan Junior High face a very obvious hurdle. They rely on the fans of the original property for their success. At the very least, you need to have seen Attack on Titan to know just what this comedy is parodying. So my first problem is that while I have seen Attack on Titan, I’m not a fan of it, feeling it was overhyped and not all that special, the anime inconclusive, and the manga frugal with its story. I had no particular desire or enthusiasm to watch Attack on Titan Junior High. Still, it managed to entertain me, and while I didn’t laugh out loud too often, I certainly smirked, and might even have chuckled once or twice. 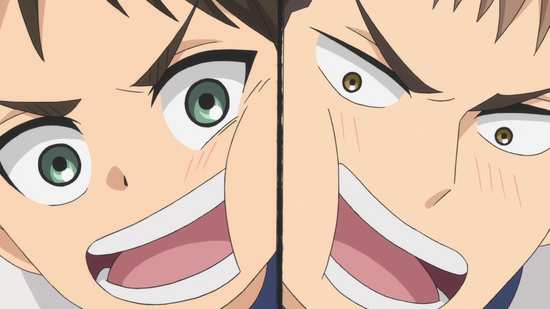 The key to this show’s humour is the transposition of the Attack on Titan story to a non-lethal, school setting, where the main character’s ire is raised by the wholesale theft of beloved pack-lunches by the Titans. It’s a segregated school, with Titans on one side, humans on the other, ruled over by a Titan headmaster. As you’d expect, it’s the humans that get the short shrift. The comedy works by giving the characters one key trait of their dramatic counterparts, and exaggerating it. Eren’s desire for vengeance against the Titans is motivated by something as trivial as his love of a cheeseburger. Mikasa’s impassive protectiveness of Eren is so extreme that if she could put him in a box and just sit on it, she would. Armin has no tolerance for cold, so he keeps his duvet with him at all times, a lot like Linus’ security blanket. Sasha loves to eat, Jean loves his ego, Oruo bites his tongue, Hanna and Franz are all love hearts, Hange has pet Titans to experiment on, Levi’s a clean freak, and so on and so forth. 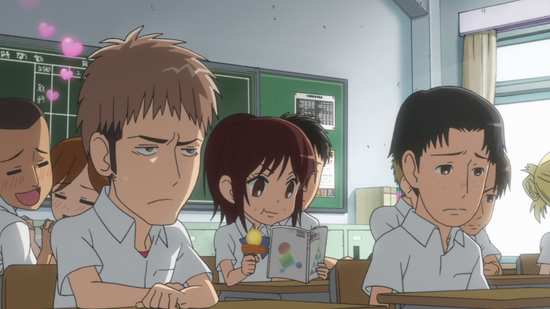 It’s a fairly predictable school comedy, there’s a dodgeball challenge, the emphasis on students cleaning the school (they use the wire gear to clean a wall here), the problem of school tests, a love letter in the shoe locker, rivalry between 1st and 2nd years, a late night test of courage, the summer festival, sports day, elections for the school president, it’s all familiar stuff if you’ve seen any anime school comedies. What make this show stand out are the parodies of the Attack on Titan characters, and the looming presence of the lunch-stealing Titans at every turn. So on occasion expectations will be twisted; the love letter episode is a case in point. 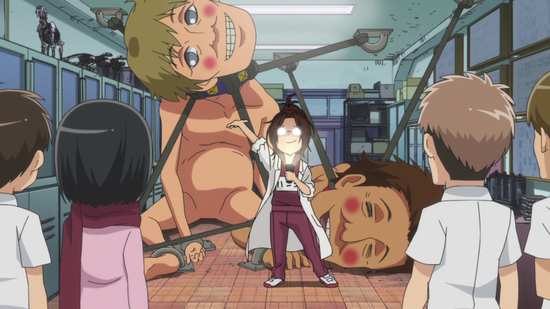 Once again, it simply boils down to the fact that I am not a fan of Attack on Titan. One of the more subtle comic aspects of Junior High is the way that it works plot elements from the original series into its own stories. Eren learning to use the wire gear is one example, and I’m sure that if you loved Attack on Titan, you’d appreciate it a lot more, would spot more of those references. For a casual Titan watcher like me, it just about bubbles over average, especially as there are a lot funnier anime out there. And I have to admit that I still haven’t forgiven Attack on Titan for not being a sci-fi war epic set on Saturn’s largest moon.