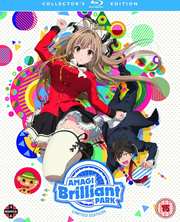 When a new anime comes out these days in the UK, it’s safe to say that I haven’t seen it. Time was that I’d have seen half the new stuff already, having streamed it on sites like Crunchyroll, but these days there is just so much new anime coming out in the UK that I get to review, that I haven’t the time to stream anymore. I started watching Durarara x2 when it was first broadcast, and at the rate I’ve been streaming it, it’s more than likely that Anime Limited will have finally released it all, or Crunchyroll’s license will lapse before I finish streaming it. But given even all that, some new anime does impinge on my consciousness, does make an impression without me even streaming it. Amagi Brilliant Park is one, as ever since I saw a screenshot of it, I’ve been wondering if it was a sequel/prequel/spin-off to Full Metal Panic. Bonta-kun and Moffle could be twins. It turns out that it’s not the story; it’s the studio as Kyoto Animation are responsible for both Full Metal Panic Fumoffu and Amagi Brilliant Park. 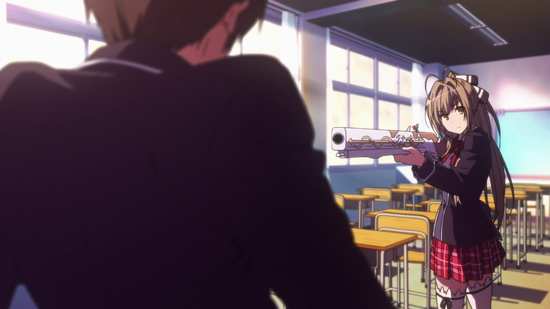 Being asked out on a date to a theme park by a pretty girl would be the dream of the average high school boy, but not at gunpoint! Then again, maybe Sento Isuzu is wise to use force against Seiya Kanie, a narcissistic boy with an extremely high opinion of himself; especially when the park she takes him to, the Amagi Brilliant Park is anything but brilliant. It’s run down, practically derelict, and with quirky, and not all that inviting staff. Sento has ulterior motives, as revealed when she introduces Seiya to the manager, Latifah Fullanza. It turns out that Amagi Brilliant Park was set up by actual fairies from Maple Land. They collect power from the enjoyment levels of visitors to the park, belief in magic that keeps them alive. 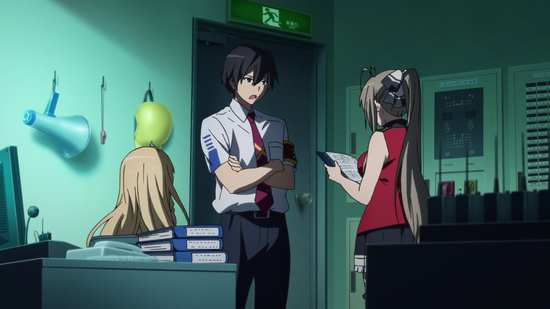 The problem is that not only are visitor numbers declining, but the lease is up, and if they don’t get a quarter million more guests in three months, property developers will force the closure of the park, an event that will mean certain doom for the fairies. They want the charismatic and utterly self-believing Seiya to take over as acting manager, and to prove that they are telling the truth, Latifah bestows magical powers on him. Seiya’s going to have his work cut out for him, especially with the mascot Moffle constantly picking fights... 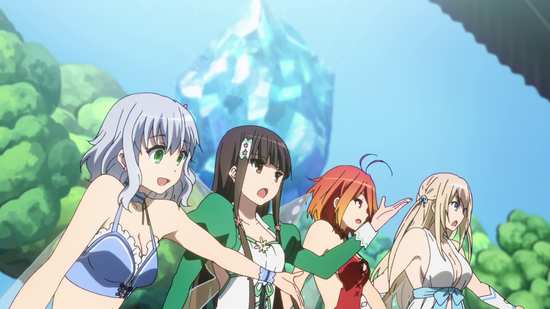 14 episodes of Amagi Brilliant Park are presented across two Blu-rays from Animatsu. 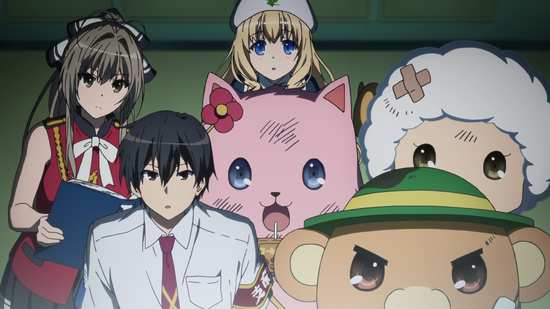 Amagi Brilliant Park’s 1.78:1 widescreen 1080p transfer is par for the course for modern anime in high definition. The image is clear enough, with strong consistent colours, and a nice absence of compression artefacts, aliasing and all but the most minor digital banding. This being a KyoAni production, you won’t be surprised to see high quality animation throughout, with pleasant and appealing character designs, and an intricate and detailed world design. When you’re making a show about a theme park, it has to look the part, and Amagi Brilliant Park really does sell its story well when it comes to visuals. 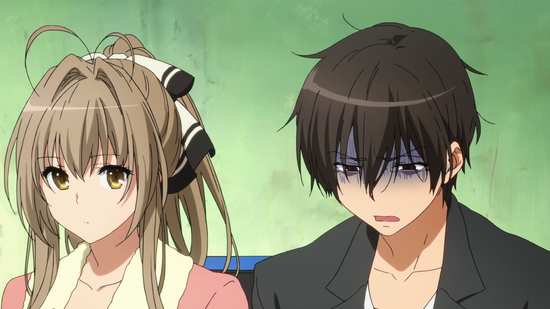 You have the choice between DTS-HD MA 2.0 Stereo English and Japanese with English subtitles and a signs only track, locked as usual. I was happy with the Japanese audio, and while the character voices conformed to their individual archetypes, the performances were enthusiastic, and suited the show’s tone and style. I gave the English dub a try, and wasn’t immediately persuaded to turn it off. It seems that Sentai are getting over their ‘phone it in’ period and have started putting some more effort into dubbing. The subtitles are timed accurately and are free of typos, while the show’s music keeps the pace light and peppy. 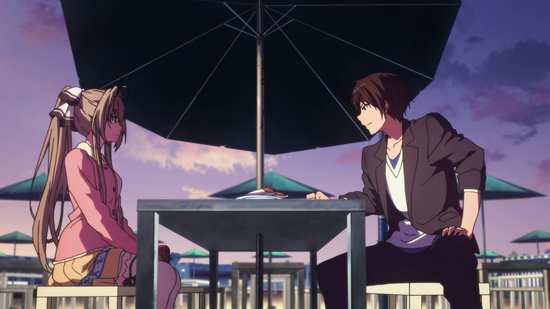 Disc 1 autoplays with a trailer for Love, Chunibyo and Other Delusions Heart Throb.

Disc 2 has the extras. 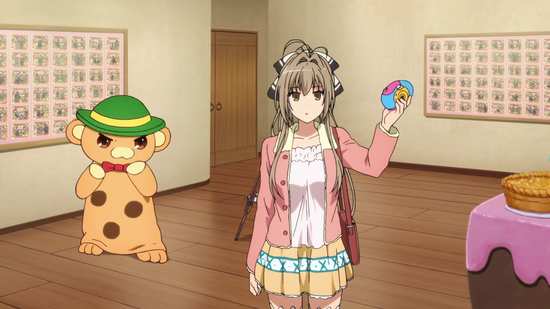 The “Extra Magic” International Mix lasts 1:32, and is the opening theme with English lyrics.

You get 4 textless openings, and 1 textless closing.

You also get trailers for Love, Chunibyo and Other Delusions Heart Throb, My Love Story!!, My Teen Romantic Comedy SNAFU Too, and When Supernatural Battles Became Commonplace. 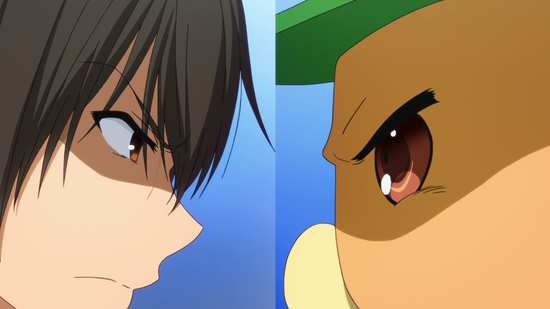 The Holy Grail that I seek in any new anime that I watch these days is originality. Quite naturally that’s become ever more elusive the more anime that I watch, but it’s when I see something that I’ve never seen before that I really sit up and take notice. I love to see originality of story, originality of premise, originality of character, but given the production line, made to order, committee driven nature of the anime business, I have to settle for originality of style, different ways of accomplishing familiar things to get me enthused. The ultimate would be a wholly original story with original characterisations, but that hardly ever happens, especially original stories as it seems that it has all been done before in some way or another. Amagi Brilliant Park is almost that ultimate. It’s a show with an original storyline, for me at any rate. Alas the character archetypes are all too familiar, and many of the comedy short cuts are well-worn, tried and trusted. But the most important point is that Amagi Brilliant Park has a story that I haven’t seen before, and that makes all the difference. 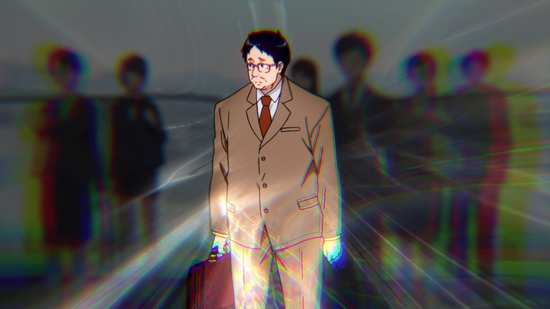 It’s a fish out of water tale; a high school student is parachuted into a theme park as its temporary manager, and is expected to turn its fortunes around, save it from a greedy land developer. That much is intriguing enough, but this magical wonderland is, despite its initially dilapidated appearance, actually a magical wonderland. It’s a concern created and run by fairies from Maple Land, who by creating a theme park in ‘our’ world, are able to harvest the joy and wellbeing of customers, Animus, which they use to empower their existence. Like all fantastic creatures, without love and belief, they cease to exist, and the closure of the park will literally mean the end of their lives. An oracle has pointed to Seiya Kanie as the one who can save the park, a narcissistic former child actor whose personality is such that he doesn’t have many friends. But that narcissism means that he has the overabundance of self confidence that might just see him through any adversity. And there is adversity given that he has to double the annual attendance figures in just three months. 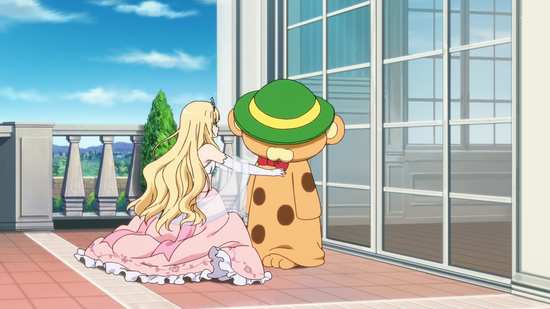 He’s shanghaied into this job by the cute transfer student in his class, Sento Isuzu, who take him on a date to the park at gunpoint (magical muskets), and shows him around the facilities, before taking him to meet the manager, Princess Latifah. Sento’s the quiet girl with a short temper stereotype, while Latifah is the cute adorable princess. Seiya Kanie himself has Yuta’s chunibyo Dark Lord personality (Love, Chunibyo and Other Delusions) but toned down a bit. It’s the sense that he has a past history with Latifah that convinces him to take the job, with Sento as his right hand. 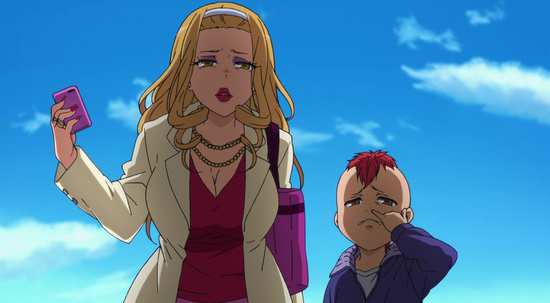 The first order of business is to meet the rest of the staff, and the more important characters in the show. A trio of mascot animals (who aren’t actually in suits) kick thing off, the perverted cat Tirami, the hard-rocking sheep Macaron, and most significantly the short tempered mouse, and Bonta-kun lookalike Moffle. Moffle is quick to pick fights, is overly protective of Latifah, and hates being called a knock-off, which increases the frequency of fights. Then there are the girls of the Elementaria attraction, the level headed Muse, the introverted Kobori, the fiery Salama, and the air-headed Sylphy. For me Sylphy is the star of the show, if only because she’s always in her own world, doing her own thing. There’s a serious conversation going on about attendance figures, and she’s speeding around the room in a wheeled office chair, playing at winter sports. She is totally wacky and adorable. 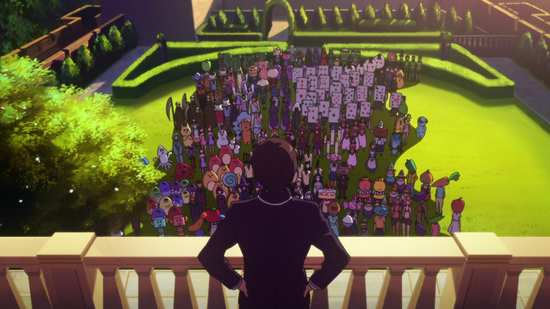 As the series unfolds we get to see more and more of the park, meet more of the employees, which adds to the comedy. Seiya comes in like sledgehammer, realising the goal isn’t to make money, it’s to get the visitor count up, so he goes about changing the way that the park works completely. It also has the effect of initially antagonising almost everyone in the park (his first act is to shut it down for the day so that they can clean), but as his changes start to take effect, the employees start to warm to him. It still takes half the series before Moffle stops attacking him the way Kato attacks Clouseau though. 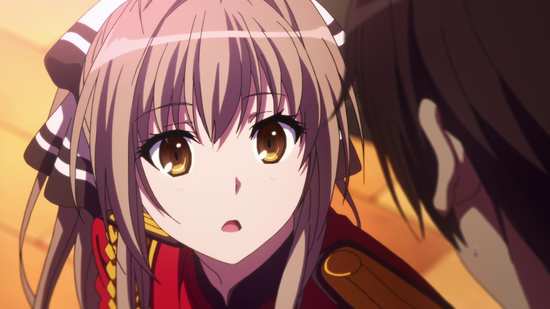 Of course there’s more behind the story than just keeping the park open, and it all ties into that shared past that Seiya has with Latifah. It gradually becomes clear that the imperative to keep the park open has a more ominous reason behind it, and as you might expect in a story like this, it all comes down to the wire, a battle against the odds to get those final customers to cross the threshold. 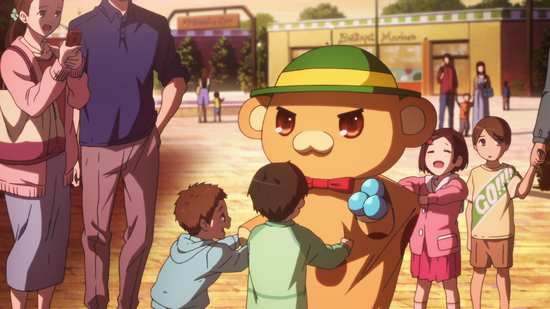 Amagi Brilliant Park is entertaining, funny, colourful and strongly animated. The characterisations may be familiar tropes, but the energy and comedy that they bring to the story is appreciated nonetheless, and more importantly, I haven’t seen a story like this one before. Amagi Brilliant Park gets stronger and more entertaining as long as it sticks to the main storyline. The one small problem is that the story ends in episode 12. The thirteenth episode might be considered a bonus, and it misses an opportunity by not addressing the aftermath of the twelfth episode. Instead it goes for a simple, stand-alone tale about making an advert for the park, and it only has the one joke to it. It would be a disappointing way to end a strong series, but thankfully you get the OVA episode as well, which is stronger, and has a better comic through-line to it.