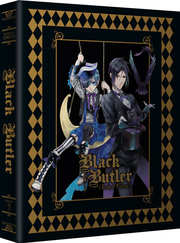 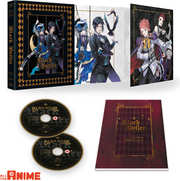 Aniplex! That’s the first thing that you ought to know when approaching this series. Aniplex and Aniplex US operate in a different way to the rest of the anime world, and it’s usually anime fans that pay the price... literally. I started two Aniplex series for review today, and both are distributor limited for fans, whether it’s in disc specifications, or in release format. With Black Butler: Book of Circus, it’s the former, with a longer Funimation disclaimer at the head of the disc, indicating that it is licensor constraints that have stopped Funimation from creating one of their usual 5.1 English up-mixes, limiting the English audio to stereo, just like the Japanese. You’d also expect the OVAs to be bundled with the series, but this time we’ll have to wait for The Book of Murder to be released separately. 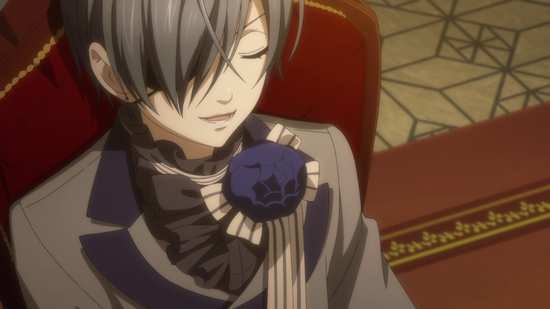 I had thought that the Black Butler franchise was dead after the first two series. But it turns out that it was just resting. Not that the first two series were all that bad. Like so many anime, they suffered from outpacing the source manga, so that the first 24 episode series was half adapted and half original, while the second 12 episode series was a wholly original creation. I’m something of an outlier in that I really liked that second season, but the trouble with those original storylines was that they took the story in directions that were difficult to reconcile with the manga. It’s not like you can start adapting the manga again and simply slot the new stories back in. They’re practically a different continuity now. Only they’ve started adapting Black Butler again. To differentiate these new stories, they’ve adopted the ‘Book Of’ prefix. We’re beginning with the Book of Circus series, to be followed by the Book of Murder OVAs, and potentially the Book of the Atlantic movie. 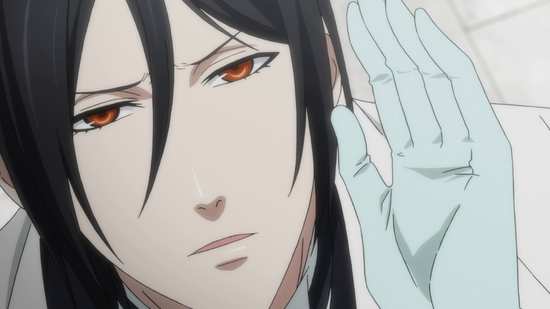 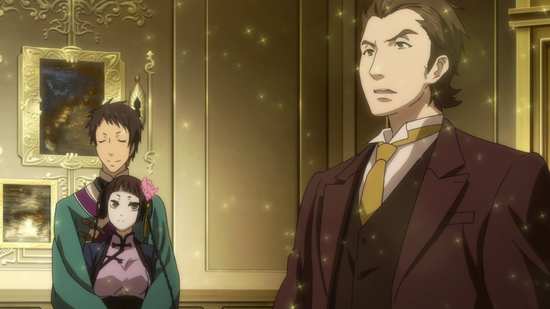 There’s a circus spreading joy and frivolity through the land, the Noah’s Ark Circus, only wherever it visits, children go missing. Queen Victoria has issued a new directive to her watchdog Ciel Phantomhive, to go undercover and find out just what the performers of the Noah’s Ark Circus are up to. It turns out that it’s not every boy’s dream to run away and join the circus, but it might just be every butler’s dream...

The 10 episodes of Black Butler: Book of Circus are presented across two Blu-rays as follows from All the Anime in this Collector’s Edition. The show is also available on standard DVD. 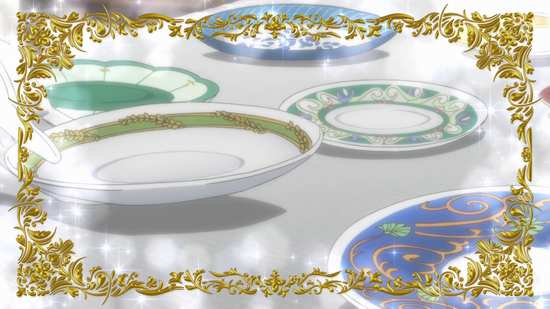 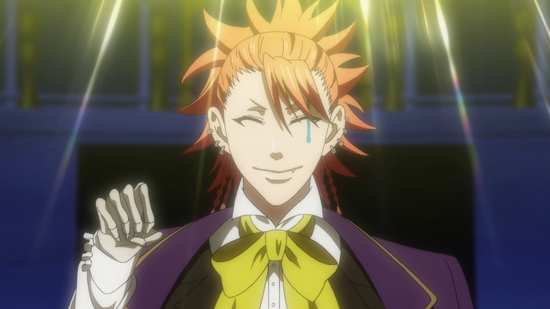 Black Butler Book of Circus gets a 1.78:1 widescreen 1080p transfer on these Blu-rays. The image is clear and sharp, presented on this release with no issues other than the most minor of digital banding. You’ll be familiar with the character designs from the previous two instalments of the show, and the animation is on a par with those releases, if not a nudge more fluid. The CG horses are still laughable, but the detail level in the show has certainly gone up to warrant an HD presentation. A fair fraction of a show’s budget goes on the credit sequences, and it’s here you’ll also see the benefit of high definition the most, although there are moments in the show that sparkle as well. 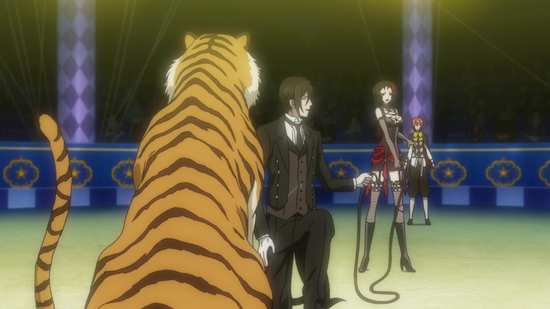 Aniplex constraints mean that this time you only get standard Dolby TrueHD 2.0 Stereo English and Japanese with translated subtitles and a signs only stream locked to the appropriate audio. As always I opted for the original Japanese track, which was more than adequate. Black Butler: Book of Circus’ music lives up to the quirkiness of the first two seasons and I was surprised that Taku Iwasaki didn’t return for this third outing, Yasunori Mitsuda handling the music duties this time. 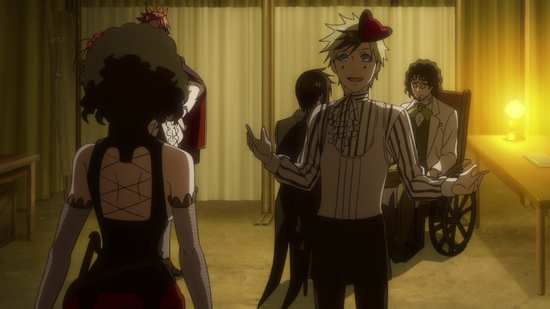 But then there’s that dub. Let’s put it in context. A UK company could make a show, with British actors, set in America, with everyone speaking in American accents. Depending on the quality of the actors, most of the UK audience would accept that show. But try selling that same show to the US... Black Butler is an anime show set in Victorian England, and Funimation have created a localised dub with accents, with a predominantly US cast, and for US audiences. For them, British accents amount to upper class, and cockernee. Sebastian and Ciel are tolerable, even enjoyable to listen to, but the supporting cast leave a lot to be desired, and when they start throwing in other European and Indian accents my ears start to bleed. In an ideal world with loads of money in, it wouldn’t just be Ghibli’s Arriety that would get separate US and UK dubs. 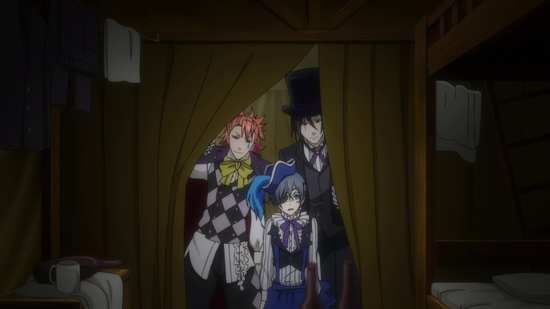 The discs present their content with animated menus. In another apparent directive from Aniplex, Funimation haven’t re-versioned the credit sequences, and each episode is followed by a translated English credit reel.

Disc 1 autoplays with a trailer for Garo: The Animation, and the sole extra here is the audio commentary on episode 4 from ADR Director Ian Sinclair, Brina Palencia (Ciel), and Mikaela Krantz (Doll/Freckle). 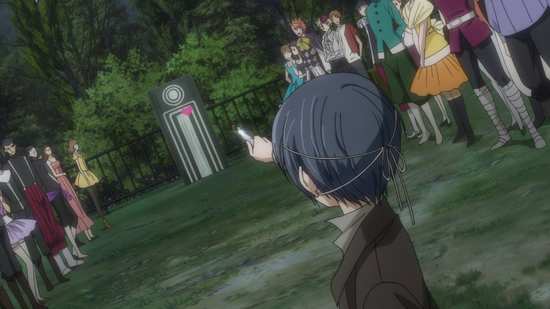 There is a Video Commentary on the 10th episode with Ian Sinclair, Brina Palencia, Mikaela Krantz, and J. Michael Tatum (Sebastian).

You get the US Trailer, and further Funimation trailers for Karneval, Ghost in the Shell: The New Movie, Psycho Pass: Season 2, Tokyo ESP, Danganronpa, Fairy Tail Part 19, and Black Butler: Book of Murder. 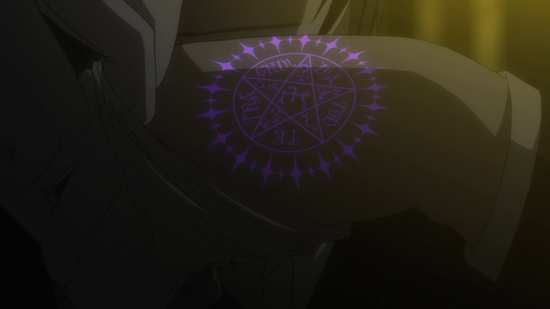 It’s a little odd that I like Black Butler. After all, the supernatural is not my particular favourite genre; I’ve always been more interested in sci-fi and cyberpunk rather than ghosts and demons. The second thing is that Black Butler also sells a certain homoerotic subtext between the devilish butler and his underage charge that really appeals to a distinct target audience of which I’m not a part. This was especially true of the latter half of season 1, and all of season 2, when the anime strayed from the source manga. But I can’t help it, I really enjoy Black Butler, it’s one of the stronger anime series out there, and this third season is no exception. 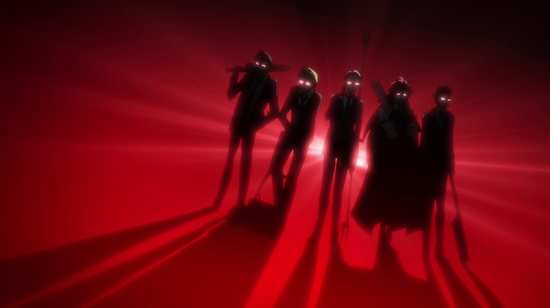 It all comes down to the writing, the story, which Black Butler excels at. It always plays the long game, unfolds its story over the series run, and it makes you hang on every word. This was also true for the anime original content, but now that this third season is here, faithfully adapting the Yana Toboso manga, the storytelling is the best that it has ever been. 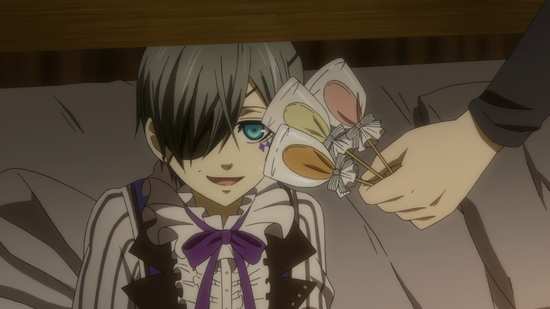 After a brief, single episode reintroduction into the world of Ciel Phantomhive and his butler Sebastian, as an unsuspecting arms dealer falls foul of the Queen’s Guard Dog in the usual, overwhelming fashion, we move on to the Noah’s Ark storyline proper, as Ciel is instructed by Queen Victoria to discover what’s happening to children, suspected to have been kidnapped by the Noah’s Ark Circus, and to deal with the problem accordingly. 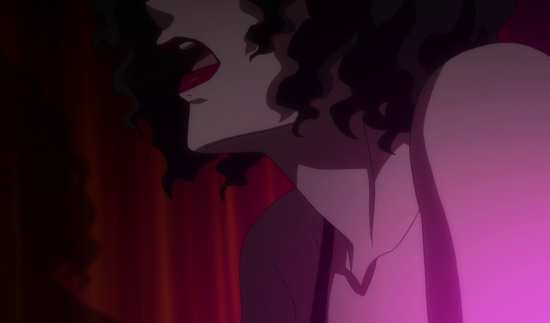 It turns out that most of the performers at the circus were under-privileged children themselves, rescued by a benefactor, and in some cases given prosthetics to replace lost limbs and repair damaged bodies. And Ciel has to go undercover in the circus to learn more. He gets into the odd position of actually making friends with the people he’s investigating. But the more he investigates, the more he sees that these incidents are tied to his own past, back when his family was murdered, and he himself was taken and abused to the verge of death, before he summoned Sebastian and made the unholy pact. 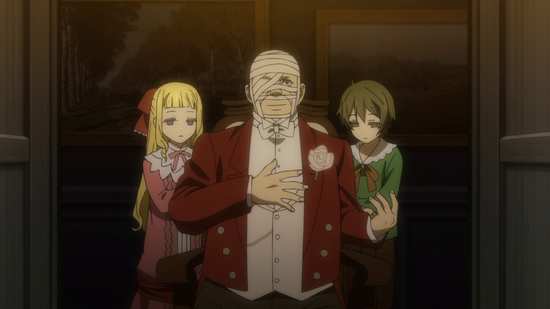 The Book of Circus starts off light, comedic and entertaining, but it takes its story and the characters in a dark and unrelenting direction. All the usual suspects make an appearance, Ciel’s eccentric servants, Prince Soma and Agni, Grell Sutcliff and more, but the story focus always remains on Ciel, Sebastian and the circus. If there is one thing to take from this story, it’s the fact that Sebastian, the devil of a butler, can be taken aback by the darkness, the manipulative malice, self-serving petty evil in the human heart, which at some points in the story, and given some of the choices that Ciel makes, will have you questioning who is the devil, and who is more humane. 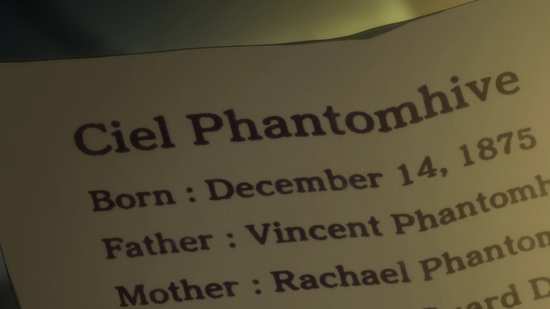 This is the best Black Butler yet, which given the high standards set by the first two series is really saying something. After almost 9 years since the first series, I’ll be perfectly happy if they keep on making them as long as they remain this good. Given the quality of the manga, that’s more than just a pipedream.