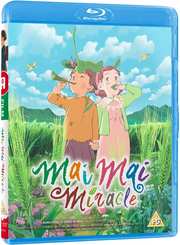 The usual shortcut to selling a movie is to remind the world what the creator is most famous for. Somehow selling a gentle, rustic, family movie looking at the imaginative world of children as coming from the director of Black Lagoon doesn’t seem appropriate. You might have thought that Mai Mai Miracle was the kickstarter to end all kickstarters for Anime Limited (only they went and kickstarted Mind Game after that). Patema Inverted might have been a relatively simple affair, but Mai Mai Miracle needed a miracle of its own to eventually get a home video release. The problem was that it was a catalogue title in Japan, a 2009 movie and its creators had moved onto other things. That made getting approvals and elements signed off on an order of magnitude harder. It took over two years from kickstarter to the point where backers finally held their much coveted Collector’s Edition. And now, finally in June 2017, the retail release is here, two discs in an Amaray case, no physical extras; you should have backed the kickstarter. This is a combo release with Blu-ray and DVD discs. I received the DVD for review purposes. 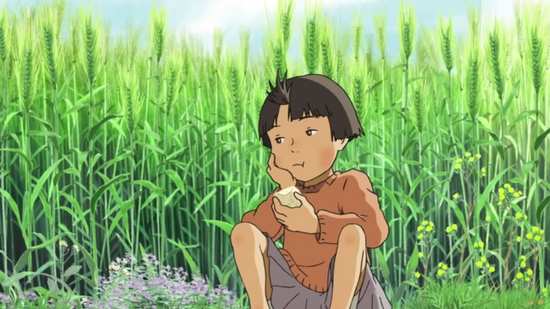 Shinko is a young girl who lives with her grandparents, her mother, and her little sister in the idyll of the countryside, some ten years after the end of World War 2. Fuelled by the stories that her grandfather tells her, her overactive imagination, which she attributes to the unruly Mai Mai curl of hair above her forehead, fills her world with colour and characters from Japan’s Heian period 1000 years previously. When a new girl transfers into their school from Tokyo, a morose, introverted girl named Kiiko, Shinko takes it upon herself to brighten her life, and introduce her to her fantasy world. It’s a summer of adventure and enjoyment, but the real world is never that kind. 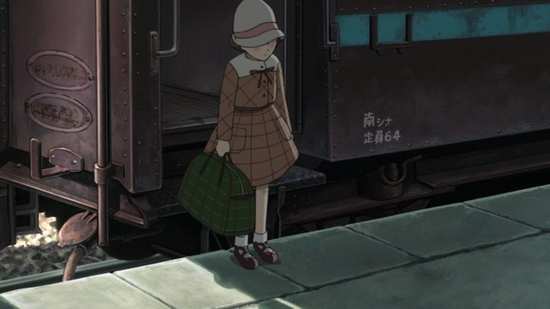 Mai Mai Miracle gets a 1.85:1 anamorphic NTSC transfer on this DVD disc, progressively encoded for 24 fps playback on compatible equipment. The image is clear and sharp enough, and scales up quite adequately to a flat panel display. Strong consistent colours from a warm and nostalgic palette complement the gentle character designs and inviting world design. This is a film that has a Ghibli-eye view of child characters, capturing their sense of wonder and imagination, but the story-telling style, visually is of a more down to earth and realistic feel, even with Shinko’s flights of fancy. 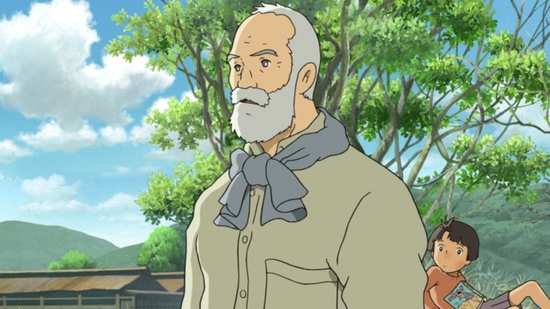 You have the choice between DD 2.0 Stereo English and Japanese with optional subtitles and a songs and signs track. I went with the Japanese audio and found it to be a competent enough affair, the characters suitably cast, and the emotion of the piece coming across well. The mostly vocal music soundtrack is quite quirky and unexpected, but complements the story brilliantly. One issue that is easily resolved is that the Japanese audio volume is really low. Not so for the English dub, which was commissioned from NYAV Post, directed by Michael Sinterniklaas, who opted to cast children in the main roles, as happened in Welcome to the Space Show, which adds a degree of authenticity to the performances. The subtitles are accurately timed and are free of typos. 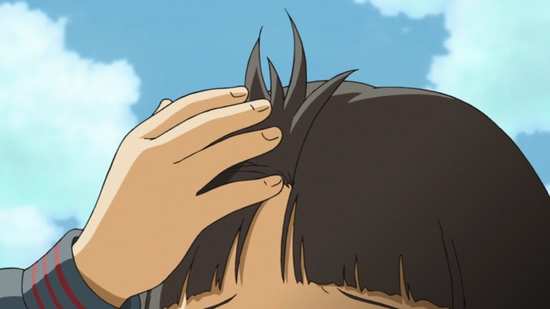 The DVD presents the film with a static menu.

The big extra feature on this disc is the interview with Michael Sinterniklaas, which lasts 15:18, and it’s an interesting, and detailed conversation regarding the casting of the film and the recording process. However, one comment that rang alarm bells was the suggestion that the film be watched in surround. You only get stereo on the disc, and I believe the Blu-ray is PCM 2.0 stereo as well, which instantly raises the question as to what happened to the surround track?

You get the textless ending and the trailer for the film. Incidentally, the film is followed by an English language credit scroll, crediting among others a whole heap of kickstarter backers. 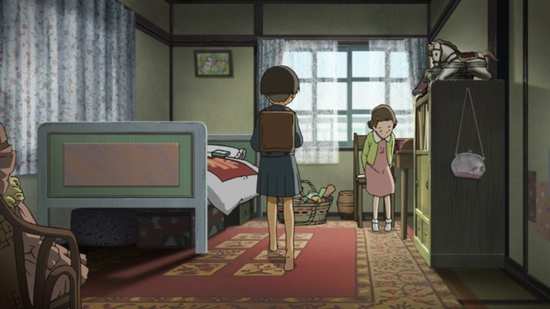 Thank you All the Anime! When I was ten, my family went on a trip to India. We had a place in Punjab near the Agricultural University. There weren’t too many houses back then, plenty of empty plots, and you could see wheat fields from the university, a canal, lots of irrigation ditches, while the big employer in the area was a dairy plant. It’s about as rural as you could get within five miles of a city centre. And there I was, a city boy, not speaking the local language, or not without an impenetrable London accent, introverted as anything, and wondering what I was going to do for a month. Then I met the local kids, got ‘adopted’ into their gang, and spent a holiday having great adventures (and playing a lot of cricket), only coming home after the sun had set. It was also one of the few times that I could spend with my grandfather, a retired Air Force officer who had this whole other perspective on the world that was a revelation to a ten-year-old. Watching this film, I went straight past the nostalgia and straight into a midlife crisis. As I said, thanks All the Anime! 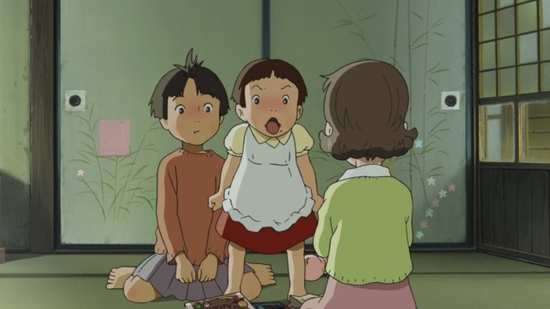 Mai Mai Miracle is a delightful film though, with just the right degree of the Ghibli feel, a little bit of When Marnie Was There, a fair bit of My Neighbour Totoro and a larger portion of Only Yesterday, but really it does its own thing too when it comes to how children view the world, and how they deal with tragedy and loss, as well as celebrating the joys of friendship, the magic of imagination. The driving force behind the story is Shinko, a happy and fearless girl, whose imagination paints the world with the stories of 1000 year-old Japan that her grandfather tells her. She creates characters, tells stories, makes the world seem brighter and more vibrant. The latest addition to her mindscape is a princess named Nagiko, who comes to the area with the new governor of Suo, expecting to find other girls her age to play with, but winds up spending most of her time alone, wishing someone would visit. 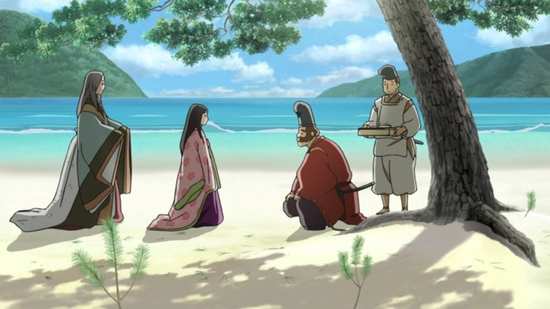 This coincides with the arrival of Kiiko from Tokyo, a city girl who is still in mourning for her mother. Her prim appearance doesn’t fit in the classroom, and there is the inevitable good-natured bullying of someone who is different, not helped by her introverted nature. But her grief and inward nature also is a sign of loneliness, and naturally it’s Shinko the extrovert who adopts Kiiko and befriends her. She introduces Kiiko to her imaginary world, takes her on plenty of small adventures around the area, and it isn’t long before they’ve gathered a group of friends. One of their ideas is to build a dam for one of the irrigation streams, and create a little lake. And when a goldfish shows up and takes residence, they adopt the fish too as a sort of mascot for the gang. It’s all a lot of fun, and evokes much of that nostalgia that I was talking about. 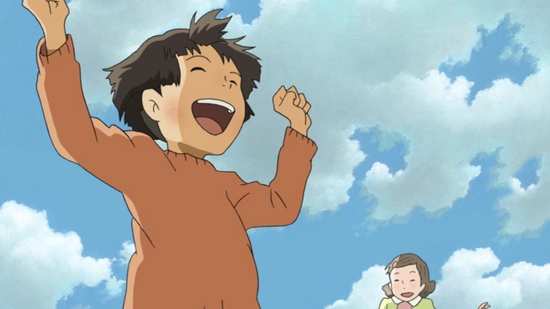 But Mai Mai Miracle has its serious side too, with the real world impinging on the children’s adventures on more than one occasion. Kiiko may be working through her grief at the loss of her mother, but this isn’t the only loss that the group of friends face. The world of the adults also continues around them, people make decisions that tangentially impinge on their world; parents might tend to gossip, all of which offers the odd moment of disillusionment about adults. And then there are moments that affect them more directly, threaten the integrity of their group, and alter their worldview, making them grow up a little quicker. Just when Kiiko is beginning to engage with Shinko’s imaginary world, Shinko begins to doubt the miracle of her Mai Mai, and there’s a point where the balance in their friendship shifts, and it falls to Kiiko to ‘save’ Shinko in turn. 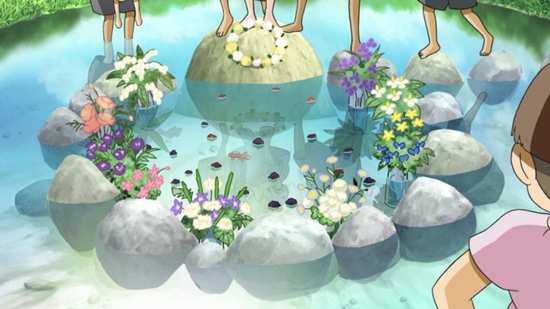 Mai Mai Miracle is a beautiful, heart-warming and nostalgic delight. For children of my age, lamenting their long lost youth, and the innocence of a time without today’s technological burdens it really is an exercise in nostalgia. But there is a more fundamental message, about death and life which offers a very useful parable for younger viewers, told in a magical and engaging way. If you missed out on the kickstarter, then now is the time to find out what so many people have discovered about Mai Mai Miracle.