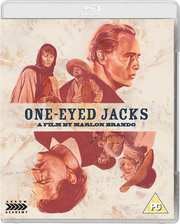 Synopsis:
One-Eyed Jacks is a film with a troubled history. It was almost the feature debut of emerging television director Sam Peckinpah, who penned the original draft screenplay, and it was almost the only Western to be directed by Stanley Kubrick before he too left the project. The eventual director was Marlon Brando, stepping behind the camera for the first and only time.

Brando is Rio, a bank-robber who is double-crossed by his friend and mentor, Dad (Karl Malden). Rio is imprisoned for his role in the crime, but escapes with thoughts of revenge. He tracks down Dad only to find that, during those years spent behind bars, Dad has used his ill-gotten wealth to become the sheriff of Monterey...

A strange, baroque Western, One-Eyed Jacks met with bewilderment by critics and audiences upon release, but slowly developed a cult following despite a succession of below-par masters. Now, thanks to an outstanding new 4K restoration from Martin Scorsese's The Film Foundation, audiences can finally see the film as intended once again and recognise the masterpiece it always was.