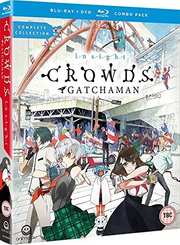 It’s been two years since we had that incipient thrill at a new anime label starting up in the UK. Animatsu’s first UK release was Gatchaman Crowds, the 21st Century reimagining of the old Science Team Gatchaman series from the seventies, that we got in a heavily altered form as Battle of the Planets. Animatsu was started by Jerome Mazandarani and Andrew Hewson after they parted ways with Manga Entertainment. But since then, Manga Entertainment has itself parted ways with its parent company, and regained some of its independence, and it subsequently merged with Animatsu. The label still exists, but it seems that fewer titles have Animatsu’s logo on the packaging, even if it’s at the head of the discs. It’s all good with Gatchaman Crowds Insight though, as the spines of the case will match logos on your shelf with the original Gatchaman Crowds. 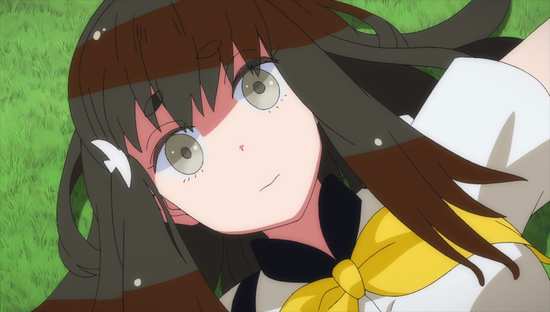 It’s the near future, one of those technological utopias that we all hope for, and while all seems peaceful and transcendent, urban myths abound of the Gatchaman, superheroes protecting the Earth from unknown alien menaces. This matters little to student Hajime Ichinose, who is considered kooky for her love of paper notebooks in a world of electronic notepads, phones and computers. It turns out that her passion for notebooks is useful, and prescient, for the Gatchaman team exists, and Hajime has the necessary power hidden away to be a member. That power is unleashed with the ‘heart’s notebook’ activated by alien powers and pulled from within, used for manifesting abilities, communicating, erasing witness memories (which is why they are only an urban myth), and more. 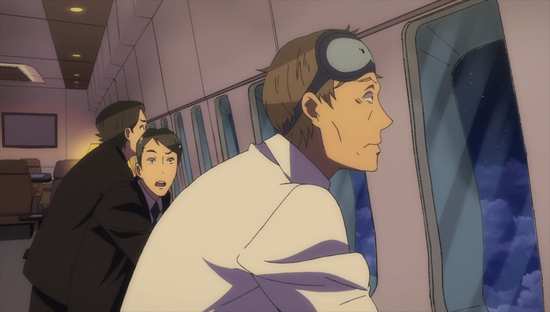 The first season saw the Gatchaman Team having to deal with Rui Ninomiya’s powerful social media app, initially a powerful and positive force for change, but one that was subverted and turned to evil ends by a former Gatchaman named Berg Katze. 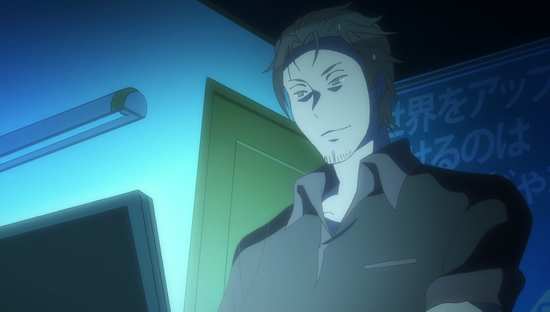 As this second season begins, things seem to have settled down over Japan. Berg Katze has been defeated, and his consciousness has taken up residence in Hajime, from where he issues forth all kinds of snark, but little else. Rui Ninomiya, the founder of the CROWDS app has become a Gatchaman, and society is beginning to get used to the CROWDS, digital avatars manifesting in the real world, allowing everyone to contribute to society. But the thing about everyone having access and the ability to use CROWDS is that everyone isn’t equal, and some have malicious intent. Some have more malice than others, when Red CROWDS appear, and assault the Prime Minister’s private plane. A new group has arisen, VAPE short for Violent APE, and they want to make clear just how bad an idea the CROWDS are, by subverting and abusing Rui’s creation. At the same time, the Gatchaman group get a new, idealistic recruit named Tsubasa Misudachi, just as an alien named Gelsadra arrives on Earth. 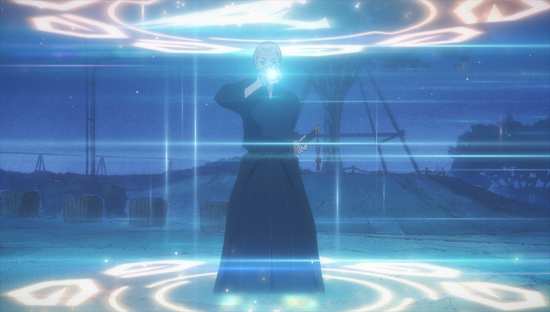 12 episodes of Gatchaman Crowds plus a brief recap episode are presented across 2 Blu-ray discs from Animatsu, thus... 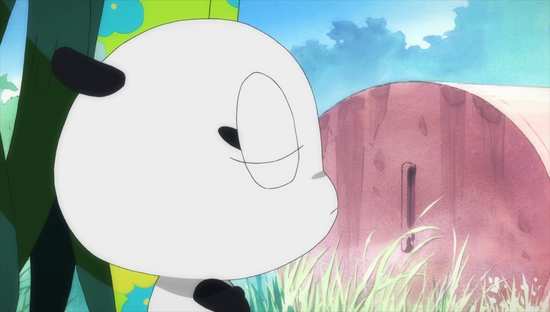 Just like the first series, Gatchaman Crowds Insight gets a 1.78:1 widescreen transfer at 1080p resolution, and it looks fantastic. The image is clear and sharp throughout, with smooth animation, detailed line art, and vivid colours. The character designs take a step away from the usual anime aesthetic to offer something a little more minimalist and stylish, but individual enough to make the character designs more memorable. The world design is detailed and clean, reflecting the utopian futurism. Reflecting the character designs, the animation too can be minimalist, especially during the quieter moments, although the action sequences certainly make an impact. The Gatchaman suits have had a CGI makeover, becoming more mechanical in look, taking a leaf from the Tiger & Bunny suits in terms of their neon retro styling, and from the way they integrate into the animation. 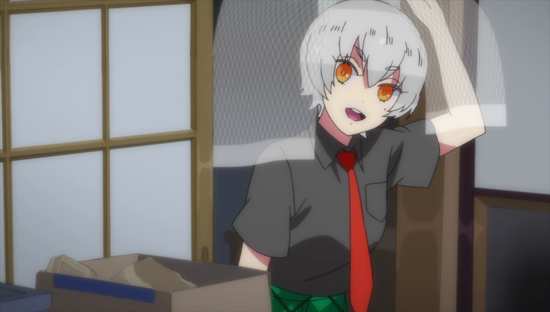 You have the choice between DTS-HD MA 2.0 Stereo English and Japanese, with subtitles and signs locked to the appropriate track. This suggests that we get the Sentai discs this time, rather than localised discs as we had for the first series. The original Japanese audio is well balanced, the dialogue clear, and the action coming across with decent stereo impact. It’s an impressive audio presentation, and I have to say that what I heard of the English dub actually lives up to that, with enthusiastic and character appropriate voice actors and performances. I do think that the dub was a little too colloquial American for me, trying to match the slacker attitudes of some of the characters, but your mileage may vary. 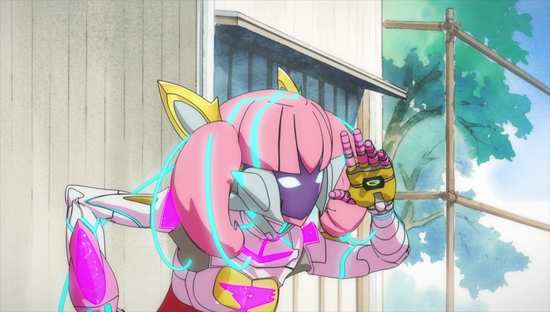 The subtitles are accurately timed and are free of typos, and just like the Monogatari franchise this is a show that has a whole lot of screen text to translate. It is after all an anime for the social network age, and you will be pausing the screen quite frequently to read the sign translations. 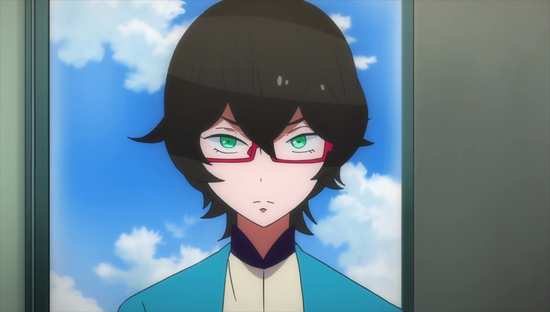 The meagre extras on disc 2 amount to the usual textless credits, one of each, and trailers for Wish Upon the Pleiades, When Supernatural Battles Became Commonplace, Log Horizon Season 2, and RIN-NE. 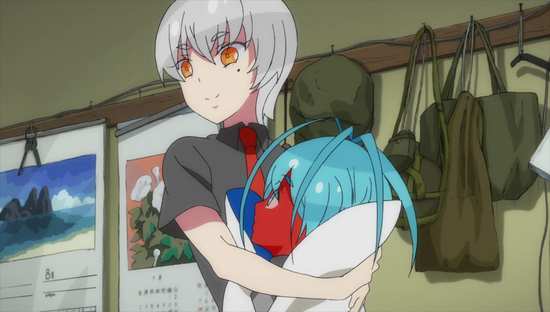 I had problems with Gatchaman Crowds. I liked much of what the show was trying to do, was interested in its story, but felt let down by the execution, uninspired by the characters, especially the protagonist, Hajime Ichinose, who almost felt like a quirky Mary Sue in her constant eccentric rightness, lacking the character weight to back that up. But Crowds had something interesting to say about the nature of mob mentality, about how easily even the most well-meaning and constructive crowd effort can be subverted for ill-purposes. Now that Gatchaman Crowds Insight is here, I have to say that it offers more of the same when it comes to the original characters from Season 1, but it is a much better series, one that really gripped me once it got going. 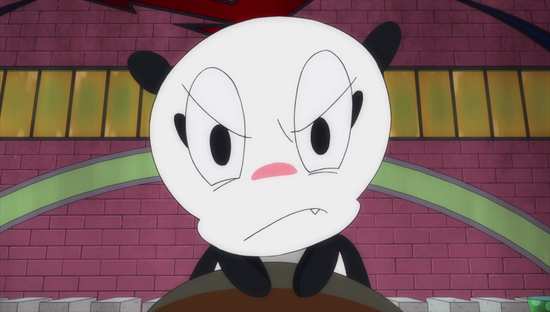 All of that has to do with timing. If Gatchaman Crowds Insight were a mainstream show, liable to sell in the seven figures rather than the few thousand that anime usually manages, the political establishment would be crying foul right now. It’s sheer serendipity of course, as I doubt MangAnimatsu had any more idea than we did that Theresa May would call a general election when they had this show scheduled for release. Gatchaman Crowds Insight builds on the first series’ exploration of mob mentality by taking it to a national dimension, looking at politics, elections, and democracy as a whole. And right now, what this show has to say is something that people really need to hear. 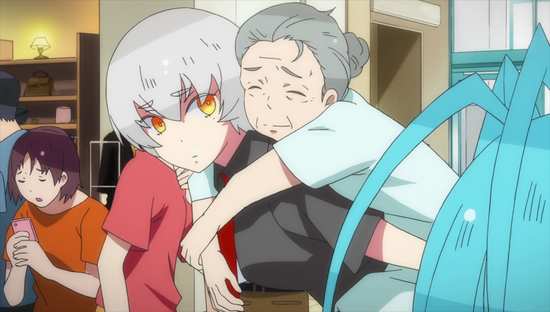 It starts off deceptively enough, with the mini-episode 00 once again looking at the CROWDS phenomenon (after a brief recap), the app created by Rui Ninomiya. While the app has gained prominence and a degree of acceptance, allowing people to collectively contribute to society by means of digital avatars manifested in the real world, the app is also open to misuse, with some people using it for criminal intent. The idea of this much power in the hands of the masses is anathema to an activist named Suzuki Rizumu, and his group VAPE (Violent APE) have managed to subvert the CROWDS app. Now Red CROWDS are appearing and committing terrorist acts, including an assault on the Prime Minister’s jet. 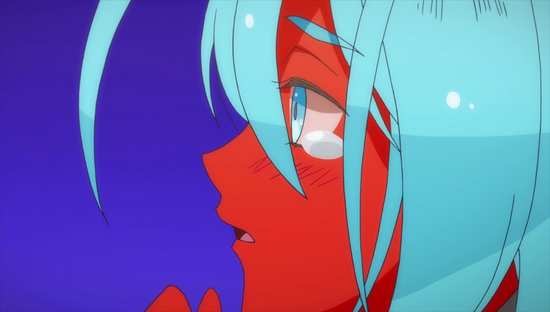 You might get the sense that the show will be about CROWDS once more, but this ideological conflict between Rui and Suzuki is the trigger for the show’s story, alongside the recruitment of Tsubasa Misudachi as the latest Gatchaman, and the arrival of the alien Gelsadra on Earth. Tsubasa is an idealistic young girl who is taken with the idea of being a hero, of inspiring humanity to become truly one. She befriends Gelsadra when he arrives, an inquisitive and peaceful alien who has the ability to see and take in people’s moods, which manifest as coloured speech bubbles over their heads. 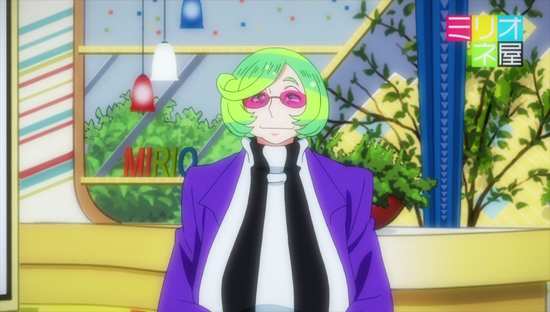 The trial of instant voting by smartphone has now been extended nationwide, so when VAPE’s Red CROWDS causes popular opinion to turns against Rui’s app, the Prime Minister, who has staked his reputation on CROWDS, calls on the people to make an instant online decision, support him and the CROWDS, or go against him and he’ll resign, triggering an election. One thing leads to another and the media darling of the moment, the popular alien Gelsadra actually gets elected as Prime Minister, and inspired by Tsubasa’s beliefs, and making full use of the phone vote app, Gelsadra goes about following popular opinion down to the letter to make Japan a better place. 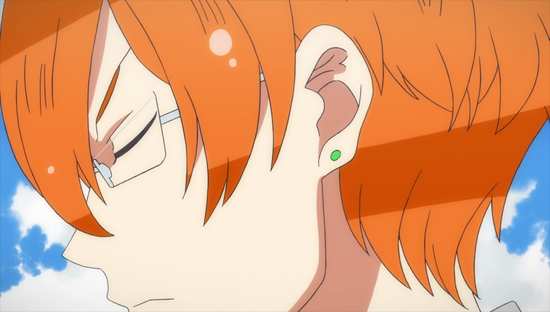 The thing about populism is that it isn’t terribly democratic, and as the story unfolds, the erosion of democracy ironically through this technological implementation of democracy becomes apparent, with complex issues being simplified to where they are no longer relevant, with mob mentality and instant access motivating votes, and with people being far too willing to forego the burden of making a choice and leaving it to those in charge instead. And eventually, what becomes clear is that Tsubasa’s idealistic belief that humanity can be as one has one big flaw. What do you do with those people, who for perfectly peaceful and heartfelt reasons don’t want to be ‘one’? 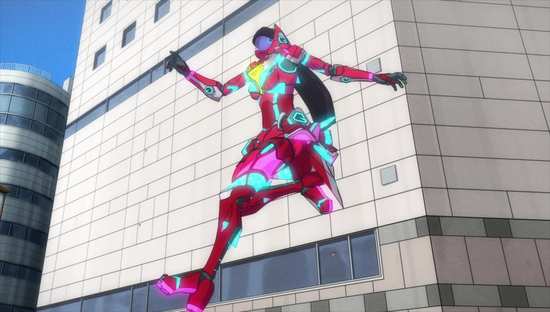 The Gatchaman wind up facing their toughest challenge, their most lethal enemy yet, that of popular opinion. Once again, while the story is solid, interesting and engaging, the show’s weakness is its characters, and once again I get the sense that I couldn’t really engage with the Hajime character, while the other Gatchaman were almost ephemeral in their degree of presence. By far the most vocal of the pre-existing characters was Berg Katze, and he exists as a disembodied intelligence inside Hajime. But the new characters are more engaging, certainly Suzuki Rizumu, and especially Tsubasa, who goes on quite the journey of self-discovery and growth through the episodes. 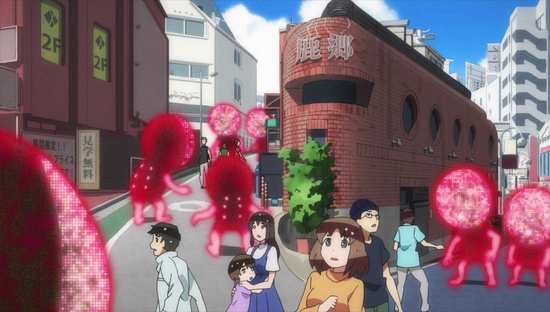 If there is a message to Gatchaman Crowds Insight, it’s that democracy is a responsibility, that votes have weight, and that you really should be aware of the consequences of the decision that you make. After all the word ‘decide’ has the same etymological roots as words like homicide, fratricide, -cide meaning to cut, to kill. When you choose between options, you are effectively killing possibilities. It isn’t something that should be taken lightly at all. Once again, a great story is let down by its execution somewhat, but for its second series, Gatchaman Crowds’ story really is strong enough despite that. And you get to see the Phoenix this time around!