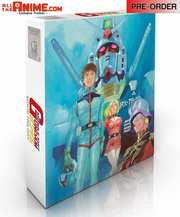 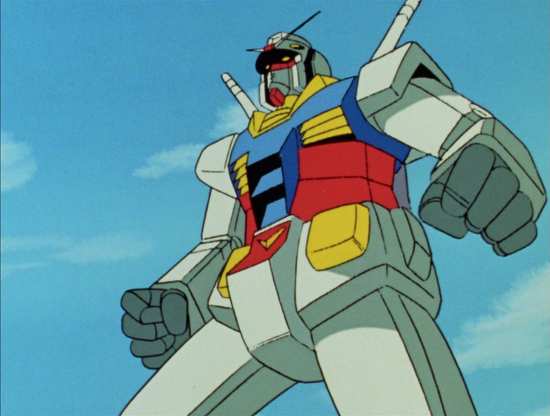 On reflection, it was probably a mistake to start watching the three ‘Mobile Suit Gundam’ movies directly after watching the relatively sophisticated animation used in ‘Eden of the East’. But, dammit, I love that retro anime look and thoroughly enjoyed wading through the entire Robotech series, not to mention ‘Battle of the Planets’ (the UK adaptation of Gatchaman). So I persevered through the opening sequences of the first movie until I ceased to notice that the animation barely moved; that it used movement more popularly associated with Captain Pugwash, and that it recycled the same reaction shots over and over again. Instead, I got slowly drawn into an action packed, highly emotive and thoroughly enjoyable series that, despite its vintage (it first aired in 1979), was a lot of fun to watch. So much so that, when I got to the end of the final ‘movie’ (actually just artfully condensed episodes, each lasting about 140 minutes) I was disappointed that it had ended. I’m now seriously considering brushing off Robotech and Battle of the Planets for another retro fix. 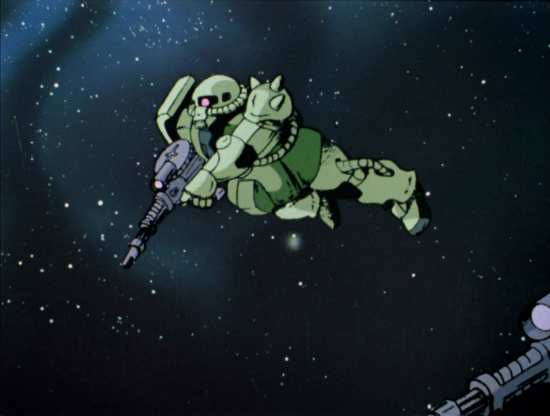 All the Anime have released all three Mobile Suit Gundam Blu-Ray movies in an economically priced three-disc box set, though they’ve limited the release to a mere 500 copies, so you want them all in one box, you’ll need to move fast. 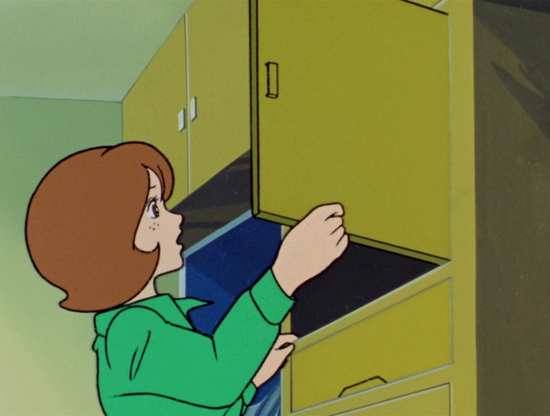 Real fans of the original anime (which was 14 hours of content as opposed to just seven here) may prefer to invest in that option and Jitendar Canth’s informed and highly amusing reviews can be found for that here and here. Having never seen that series, all I can say is that this condensed version, despite leaving 50% of the original on the cutting room floor, has a perfectly understandable and logical narrative and you never get a sense of what might be missing. They seem perfectly formed so for time-poor part-timers like me, actually not a bad way to watch the series – at least for the first time. 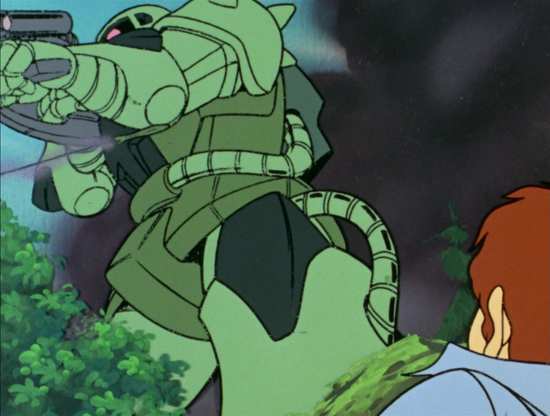 So for the uninitiated, just what is ‘Mobile Suit Gundam’ all about?

The films (first released in 1981, cutting the late seventies series into three features) focus primarily on the fortunes (and misfortunes) of its central character, Amuro – a typical teenager; impetuous, emotional and lacking confidence. The year is 2079 and the Principality of Zeon has declared independence from the Earth Federation, which has resulted in the so-called One Year War. Zeon, one of many space colonies, seems to be fighting back, thanks to their use of new human-operated, giant robots called ‘mobile suits’ – like giant ‘rock ‘em sock ‘em robots’ if you’re old enough to remember those. 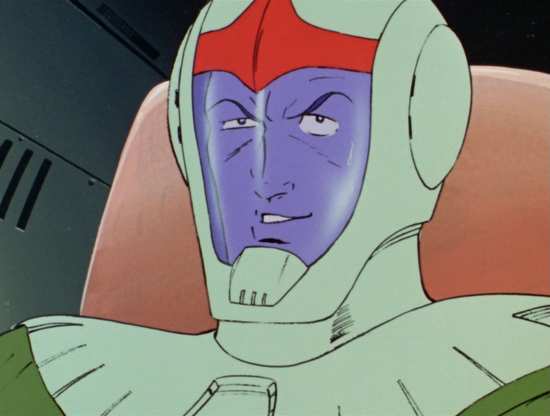 Amuro is a civilian passenger aboard one of the Federation’s giant space ships, the White Base, when they arrive at a secret research base at the Side 7 colony to pick up more weapons. However, in search of promotion and glory, one of the reconnaissance team disobeys orders and decides to go straight for an all out attack, destroying most of the Federation’s soldiers and civilians within a short but ferocious battle. 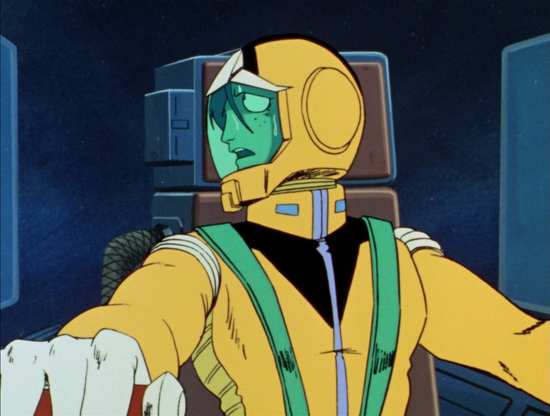 With precious few operators on board, young Amuro takes it on himself to clamber aboard the RX-78 Gundam mobile suit, and despite his lack of any training, seems really adept at operating it. Despite his almost paralysing fear, he manages to beat the enemy back using some sophisticated and impressive moves. He’s a natural; what is termed by the military as a ‘New-type’ who are youngsters who seemingly have adapted to a new life in space and who are able to operate complex machinery almost intuitively. But he’s also still a kid and he’s reluctant to become one of Zeon’s key military killing machines. 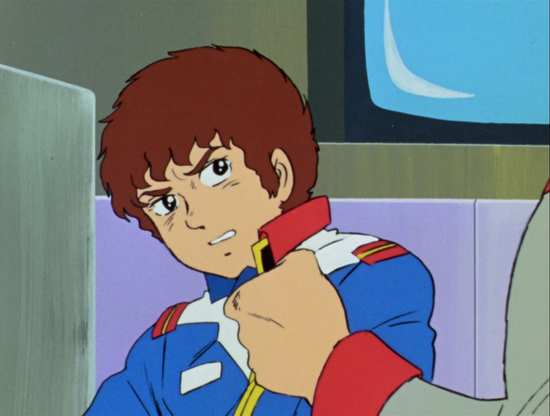 Despite his continual protestations, White Base continues to battle through space and on earth, with Amuro saving the day again and again.
The robot battle scenes are surprisingly exciting and often unpredictable in their outcomes. They’re visually impressive too, despite the low tech, low budget approach to the animation. 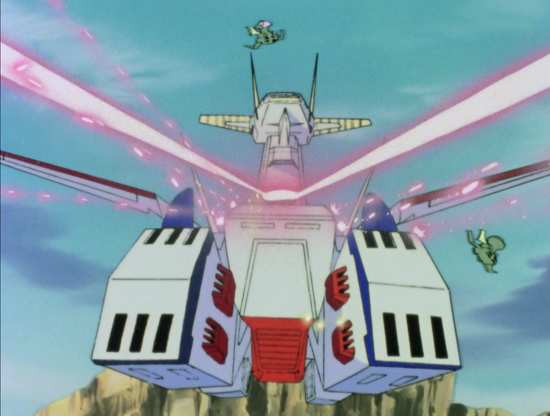 Throughout the journey, White Base keeps running into Zeon Lieutenant Commander Char Aznable who winds up Amuro in battle. Being highly manipulative, he takes advantage of the White Base team by having them kill members from Zeon's Zabi family by way of revenge. Amuro also meets ensign Lalah Sune with whom he falls in love (and weirdly, who seems to have the hots for the ‘boy’ herself) but he ends up killing her in a battle with Char. 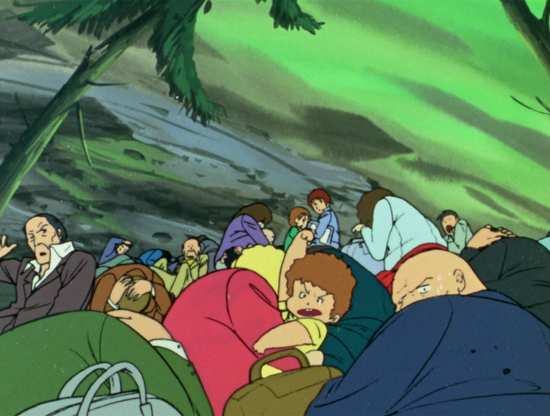 Amuro gets drawn in, battle by battle, to become an upstanding military citizen and, despite plenty of Harry Enfield ‘I’m leaving – don’t try and stop me’ moments, he is the hero who saves the day. There are many emotional moments on the way (like the sorrowful scene when he is reunited with his mother briefly on war-torn earth) and some laughs too, mainly thanks to the three infants who are reluctant to leave White Base, but the key to the series is the robot-on-robot battle action, of which there is plenty.

The three films culminate on a high note when Amuro finally faces a one-to-one duel with his nemesis, Char. 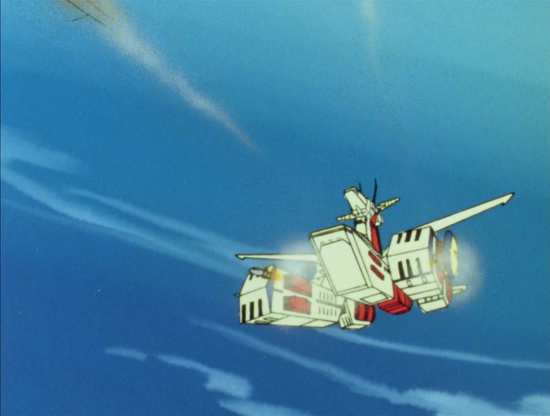 Of course, this isn’t exclusively the Amuro show. There are plenty of other characters too, including some really tough women too, like Sayla, who has a complex relationship with the Federation. 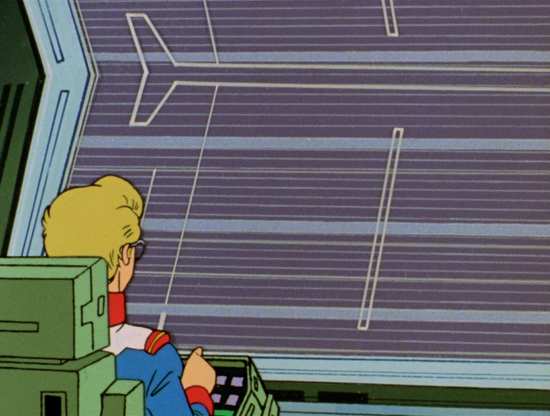 Image quality on the discs is impressive with a very decent transfer with rich, vibrant colouring and enough detail to show the animation at its best. It’s pillar-boxed 4:3 so served up in original aspect ratio which is a good thing. Of course, this is a TV series from the late seventies, so don’t expect miracles, but I found it to be a very satisfying watch overall in HD.
Audio wise, it’s Japanese only but with a choice of 2.0 or 5.1 lossless. One frustration is that the discs default to French subtitles and it’s a bit fiddly getting them back to English - a minor niggle, but a niggle nonetheless.
This is a great fun series and a welcome blast of retro nostalgia. Watching the condensed version of the series across three movies makes a lot of sense and if it sounds like your cup of tea, then it probably will be. This is probably the best possible way of picking them up .