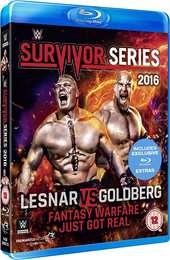 I have always loved the Survivor Series PPV and I must say this year's was one of the most anticipated and most importantly, satisfying events in years. Since the brand split this was the first real Raw vs. Smackdown Live! we have had for a long time and I do hope this is something they keep going with the PPVs where both brands are represented. We also had the return of WCW Legend Goldberg taking on 'The Beast' Brock Lesnar. Everyone was speculating... is Goldberg in shape or ready to take on the almost unstoppable Lesnar... or will Lesnar be next?

5-on-5 Traditional Survivor Series Women’s Elimination Match
Charlotte Flair, Sasha Banks, Bayley, Alicia Fox, & Nia Jax vs. Becky Lynch, Nikki Bella, Naomi, Alexa Bliss, & Carmella
The night started off with a great Survivor Series match between the Raw and Smackdown Live! Women's Divisions. It started with a horrible backstage thing with Nikki Bella being attacked which we had to wait weeks for a conclusion that everyone knew anyway. The match itself was great. I do feel that Nia Jax is far too dominant and made the whole Smackdown Live! team look weak. However, it was a great showcase of the women and although I disagreed with the way it ended, I understood it though I think it would have worked better to have had Charlotte get beaten, have Bayley win the match and then have Charlotte attack her. Maybe lead to a feud between the two. Otherwise a good
match.

Intercontinental Championship Match
The Miz vs. Sami Zayn
This was a great match and I am surprised at how much I have been enjoying The Miz's work lately. And not just because of the gorgeous Maryse. This was a fast exciting match and  certainly a great example of the 'Montreal Screwjob' done right. It does beg the question why they didn't have the US Champion against the Intercontinental Champion?

10-on-10 Traditional Survivor Series Tag Team Elimination Match
The New Day, Enzo Amore & Big Cass, Luke Gallows & Karl Anderson, Cesaro & Sheamus, & The Shining Stars vs. Heath
Slater & Rhyno, The Hype Bros., American Alpha, The Usos, & Breezango
This match was a glorious mess. It was just far too complicated. I think maybe they should have made this a rumble or just had two teams represent each brand as this just felt like overkill. The entrances alone seemed to take forever though I did enjoy Enzo and Cass as always and you can't teach that. The match had some great moments and all given a time to shine, I just think it could have worked a lot better.

WWE Cruiserweight Championship Match
If Kalisto Wins, Smackdown Live gets the entire Cruiserweight Division
The Brian Kendrick vs. Kalisto
A good match to show off the Cruiserweights, however I again feel that isolating the Cruiserweights is the wrong thing to do. What this also showed is just how great Kalisto would be in that division and how lost he is on the current Smackdown Live! roster. This probably needs to be something that happens on a regular basis. Some great moments, but I think this should have had a more definitive ending, but at least they made remember that Baron Corbin exists, even if the ending left a bitter taste for me.

5-on-5 Traditional Survivor Series Men’s Elimination Match
Kevin Owens, Chris Jericho, Seth Rollins, Roman Reigns, & Braun Strowman vs. AJ Styles, Dean Ambrose, Bray Wyatt,
Randy Orton, & Shane McMahon
This was a great survivor series match. Everyone (even Shane McMahon) felt like they belonged in this match. The scary spear to Shane from Reigns is probably what most people remember from the match, but the thing that hit me about this match when it was all over was this sudden realisation...

This match and PPV were proof that WWE could exist without him and actually thrive too. I enjoyed the whole match and even people like Strowman who was still a bit lumbering and Shane had some great moments. This was a great look at how strong the Raw and Smackdown Live! rosters are at the moment.

Goldberg vs. Brock Lesnar
AMAZING! That is all I can say. I think anything more than a 3 minute match would be a waste of what the myth of Goldberg was all about. If he had had a 10-15 minute match against Lesnar it would have been sluggish and brutal (akin to their infamously bad Wrestlemania 20 match). Instead it was explosive, impactful and just AMAZING! A lot of people have suggested this was a punishment for Lesnar for failing a drug test in UFC and obviously exposing the loophole that they don't test part timers, but if it was, it was a punishment well deserved and well delivered. This is how you end a PPV!

The extras include the two Kickoff matches. These are a great Survivor Series match featuring some of the Cruiserweights. It is a great high flying match, though there was very little  connection to any of the performers. The match between Kane and Luke Harper was great and it is always amazing to see just how agile both of these big men can be.

There are three segments and promos, a meeting between Sami Zayn and Mick Foley which is fine, Charlotte threatening Nikki Bella and Becky Lynch and a hype piece for the Cruiserweights which are all fine. However, the real highlight is Kevin Owens and Chris Jericho's interview in the Social Media Lounge. This is just comedy gold and worth buying the set for in itself. I love this duo and this, mainly improvised segment, was just  amazing.

Survivor Series 2016 is possibly my PPV of the year. I did not hate a single second of it. Despite a few quibbles and a few grumbles, I felt that everything worked. Everyone was given the spotlight they deserved and everyone took the ball and ran with it. Though none of the matches are probably going to be on anyone's 'Match of the Year' lists. As a PPV I enjoyed this more than any other and definitely recommend this to everyone.