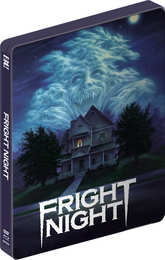 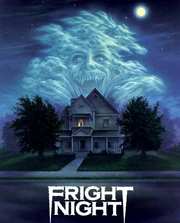 Eureka Entertainment seem to have pipped more likely contenders (like Arrow) with the release of the classic eighties horror-comedy, ‘Fright Night’. It has all the ingredients necessary to appeal to its intended market (boy teenagers) and indeed, writer/director Tom Holland makes no secret that this was his intent. So it packs in an almost perfect mix of horror (with tons of wild make up and blood), sex and glamour, eighties music and a teenage boy hero. If that sounds formulaic and contrived, well, frankly it is – but none the worse for that. ‘Fright Night’ does what it says on the tin (and ‘tin’ is right if you move fast and get one of the limited edition steelbooks available right now. Failing that, you’ll need to wait till March to pick up the standard Blu-Ray edition).

After some surprising success in penning a sequel to Hitchcock’s ‘Psycho’ (no mean feat), which was one of the most financially successful films of all time given its paltry budget, writer Tom Holland suddenly found himself the darling of Hollywood. As a result, he took a punt on, not only penning a brand-new horror film but asking to direct it too. The result was ‘Fright Night’, based on the writer’s own love of all things horror; particularly with reference to regional horror hosts, popular throughout the sixties and seventies, who would introduce ‘midnight movies’ which often included a Universal or Hammer horror.


With a great script in hand and a relatively healthy budget at his disposal, Holland set about casting the film, attracting some ‘name’ talent among the newbies, with Chris Sarandon, William Ragsdale and Roddy McDowall.

The film has an irresistible story. 17-year-old Charley Brewster (William Ragsdale), a big horror fan and typical eighties teen, spots some strange goings on when some strangers move into the spooky house next door. In fact, he’s convinced that the two men who are living there are disposing of bodies in their garden – and is doubly convinced when news reports tell of missing women from the neighbourhood and a series of ugly murders.

It seems that a vampire (and his assistant) have taken up residence. Jerry, his new neighbour who is never seen during daylight hours, is a good looking vampire (Chris Sarandon) who seems able to fool and charm just about everyone – including Charley’s own mother, not to mention his girlfriend, Amy (Amanda Bearse). So who can he turn to for help?

The answer comes in the shape of his TV hero, Peter Vincent (a deliberate amalgam of Peter Cushing and Vincent Price played superbly by Roddy McDowall), the great vampire killer himself.

Cue lots of scary encounters, masses of ‘Thriller’ style make-up, lots of blood, glimpses of sex and lots of laughs, often courtesy of his best friend, ‘Evil Ed’ played by Stephen Geoffreys but most often through the nervous bungling of Peter Vincent. 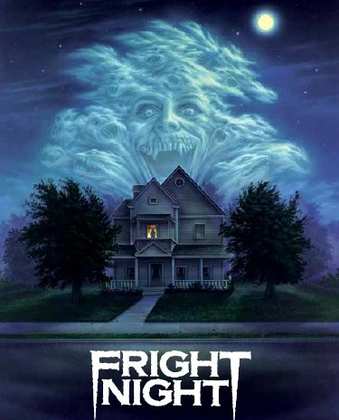 Of course, Peter Vincent turns out to be a washed-up actor with no skills in vampire hunting nor any desire to get involved. Despite that, he is soon drawn in to the point of no return and he and Charley set about bringing an end to the vampire’s deadly reign.

The special effects are impressive (as you can see from some of the stills) with Richard Edlund proving that just about anything is possible, even on a budget.

The 4K image quality is excellent, far better than the previous DVD release (which I have) which you would expect of course; well worth double-dipping for and an excellent restoration job. There are two audio options on the Blu-Ray; stereo PCM soundtrack and a re-worked 5.1 DTS-HD option which is a lot of fun.

Extra features are plentiful too. Indeed, the brand new two-hour documentary ‘You’re So Cool, Brewster’ is not only longer than the feature itself, but arguably worth the price of entry alone. Made up of interviews and on location and studio footage it is, quite simply, the definitive ‘Fright Night’ documentary. As if this wasn’t enough, Eureka have taken the time and trouble to also licence a great profile of Roddy McDowell, ‘From Apes to Bats’, which features a wealth of archival material on the actor. 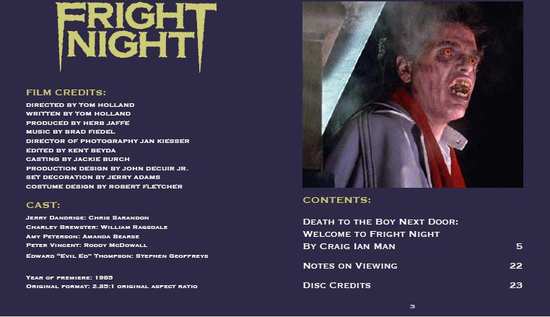 Also included is a slightly lacklustre 2008 Fear Fest ‘cast and crew’ Q & A panel. It’s clear that everyone involved in the film thoroughly enjoyed it and are also enjoying the continued interest in the film. To wrap things up there is a three-part video with Ryan (from ‘Shock till you Drop’) interviewing Tom Holland in a very relaxed, home-based environment. Finally, there are some trailers, some stills of memorabilia and a booklet featuring a new essay from critic, Craig Ian Mann. That’s a lot of features for a single film. 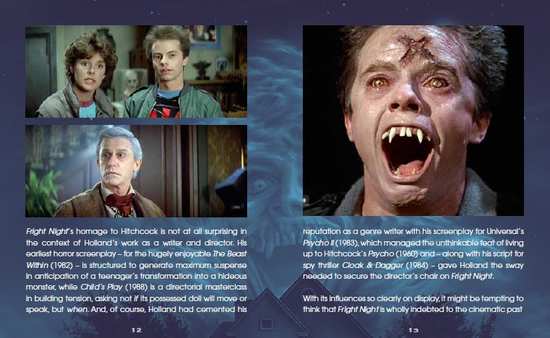 ‘Fright Night’ is a fun film, albeit an unbelievable one, with just enough shock to firmly nudge it into the horror genre. This edition should be seen as the definitive one and comes highly recommended.