Gundam in the UK might just be a case of reach exceeding grasp. That’s not hard to imagine given that Gundam is the biggest, most diverse anime franchise ever to come out of Japan. Certainly all of the right intentions were there when All the Anime announced that they would be bringing all of the Gundam that could be released on Blu-ray to the UK, matching TRSI in the US who had the license there. It all got off to a great start with the original Mobile Suit Gundam on Blu-ray late last year, not too far behind the US. But at the time of writing, the US has seen seven further Gundam series released on Blu-ray, and with more on the way, while the next in line for the UK, Zeta Gundam has only recently hit another delay. 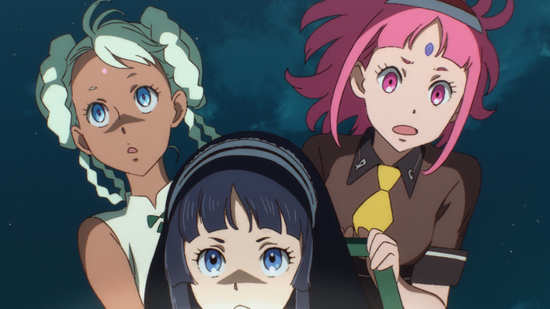 We have a triple threat of problems in the UK that the US doesn’t. For one thing, the audience in the UK is small, and the distributors are equally small. Right now, All the Anime are the most prolific anime distributor, nary a week goes by without one or two anime releases from them (they also distribute for Funimation now), and it’s hard not to over-saturate the market. On the week that I started writing this review, they released The Fullmetal Alchemist, Miss Hokusai, and Escaflowne Ultimate editions, Outlaw Star, and Your Lie in April Collector’s Editions. That’s 114 episodes of anime and a feature film. The second thing is that Gundam for us is a European thing, and All the Anime are co-ordinating French releases as well; they need to author the discs with French subtitles, which takes time. And on top of that, there are the usual problems getting all the assets together. That goes a long way to explaining just why Gundam is taking so long in the UK, but it is coming.

Indeed some more Gundam is here now, the whole point of this review, and personally I think it’s a good thing that some of the older series got delayed, as we’re jumping well ahead, past the Universal Century material, to a more recent iteration of Gundam, in 2014’s Gundam Reconguista in G. We don’t have to worry too much about continuity, and we can have all the giant robots we want, but potentially with a modern storytelling and animation style. This might just be the ideal starting point for new Gundam fans. 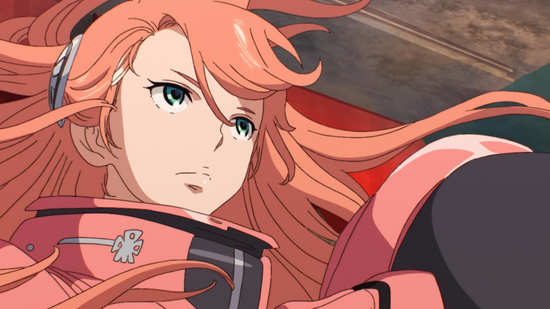 It’s year 1014 of the Regild Era, over a thousand years since the end of the Universal Century Era, and humanity has crawled out of the ruins and rebuilt society, a fairer, more peaceful society, or so it seems. Civilisation centres on the Capital Tower, the sole space elevator, and the sole source for mankind’s energy needs. And vowing never to repeat the mistakes of the past, there is a taboo against technological advancement. It’s a fragile peace though, especially with so much power in the hands of those that control the tower, and not everyone obeys the stricture against advanced technology, as cadet Bellri Zenam learns when a training mission on the tower goes wrong as pirates attack. One particular pirate, Aida Rayhunton is piloting an advanced Mobile Suit unlike any seen before, the G-Self. Bellri manages to capture the G-Self, and to his surprise he learns that he is only one of three people that it recognises as a pilot. Even more surprising is that the G-Self actually fell from space to Earth, bearing the mysterious third pilot, Raraiya Monday. Bellri will be drawn into an adventure that will shatter the myths about his world that he has clung to all his life. 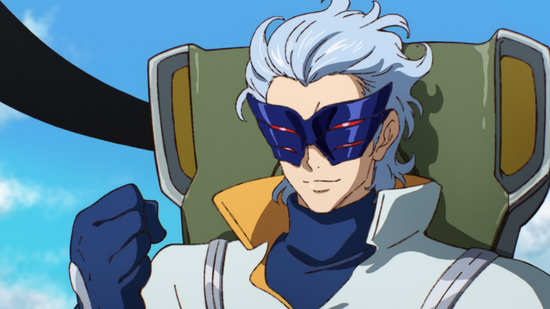 26 episodes of Gundam Reconguista in G are presented across 3 Blu-rays from All the Anime.

Disc 1
1. The Mysterious Mobile Suit
2. G-Self, Start Up
3. The Pressure of Montero
4. Wild Dance of the Catsith
5. The Enemy is the Capital Army
6. Dellensen, A Fearsome Foe!
7. The Mask Corps’s Fierce Assault
8. Mother, Father and Mask
9. The Megafauna Heads South 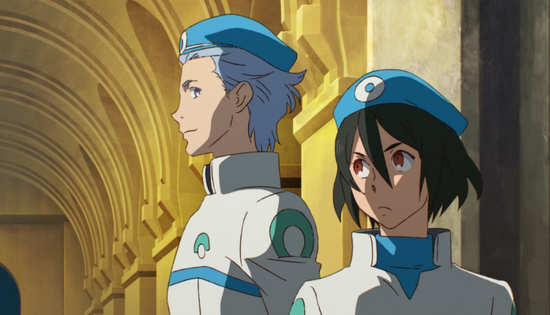 Gundam Reconguista in G gets a really quite decent 1.78:1 widescreen 1080p transfer. The image is clear and sharp throughout, with no sign of compression artefacts or even digital banding. This show has a classic Gundam feel to it, given a 21st Century polish. Certainly the characters have a fluid and hand drawn feel to them that harks back to the cel and paint age, but surely must have been accomplished digitally, as all anime made these days is. It speaks of the added tools and skills in the digital animator’s toolkit that allows for an anime with such a retro feel. While the characters may be retro, the world design certainly isn’t, with an imaginatively realised future world, with some really impressive macro-engineering, when it comes to the space elevator, the space stations and the like. The mecha designs and animation too really impresses as it should, given that this is a Gundam show, and that the giant robots have to be spot-on. 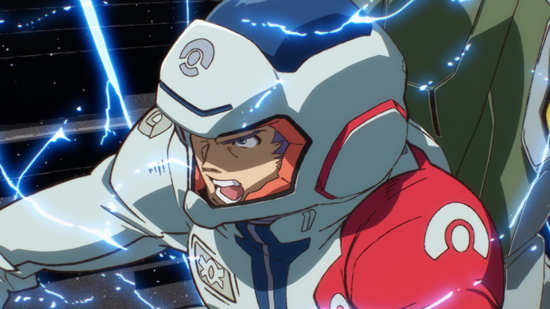 This is a Japanese only release, with locked English or French subtitles. The audio comes in DTS-HD MA 2.0 Stereo form, and is more than adequate in conveying the dialogue, the music, and most certainly the action sequences. The actors are suitably cast for their roles, and all give rightfully histrionic and dramatic performances when required. The subtitles are timed accurately and are free of typos. However, the theme songs lack subtitles.

The discs get slightly animated menus.

The sole extras are on disc 3, and amount to the second textless opening and the textless closing. There is also a 3:49 promo video, but it’s nothing to get excited about. It merely repeats those textless credits, and inserts the full variety of the show’s ‘dancing’ eyecatches in-between.

I’ve only seen the check discs for this title, and can’t comment on the packaging or the physical extras. 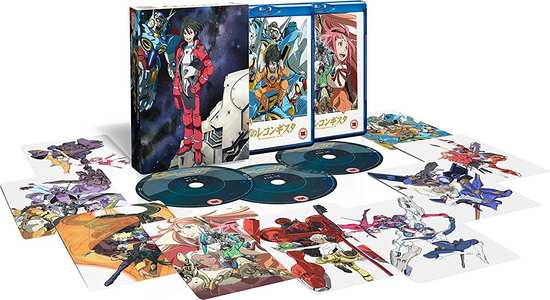 I feel like I’ve just been run over by a truck, or in this vernacular, trodden on by a herd of giant robots. My head is still spinning trying to comprehend what I just watched, and to be quite frank, I’m having a whole lot of trouble trying to make heads or tails of Gundam Reconguista in G. The most charitable thing I can say about it is that they’ve somehow managed to squeeze about a hundred episodes of narrative into just 26. Of course something had to give, and that something is common sense. Gundam Reconguista in G is lovingly animated, it’s great to look at, with an epic and far-reaching storyline, and a massive cast of characters that all get some degree of development, and it is packed to the gills with giant robot action; you’re pretty much guaranteed an extensive fight sequence in each episode, and usually there is more. And none of it makes the slightest bit of sense to me. 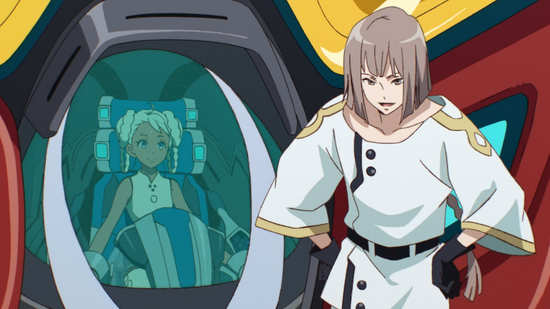 There was an opportunity here to reinvent the Gundam. Having set the show some 1000 years after the Universal Century, they had even more of a scope to refresh the concepts for modern audiences, the way that Star Trek The Next Generation moved on from the original Star Trek. Instead this is very much Gundam of the old school in terms of how it looks, although the animation certainly makes the most of modern skills and technology. The characters too are quite simplistic, and wouldn’t be out of place in a 1970s anime, but are certainly out of place in a 2015 show.

The pace of the show is breakneck, and the scope of the story expands as fast as that of Gurren Lagann, although it lacks the machismo and style of the latter. The show also suffers from character overload. We begin in the Capital Territory, climbing the Capital Tower with protagonist Bellri Zenam, and soon to be antagonist Luin Lee (26 episodes through the show and I never figured out why Luin Lee wound up hating his friend). It’s there we encounter the pirates of the Megafauna, who are allied with/sponsored by the state of Ameria, who themselves are at war with someone else. 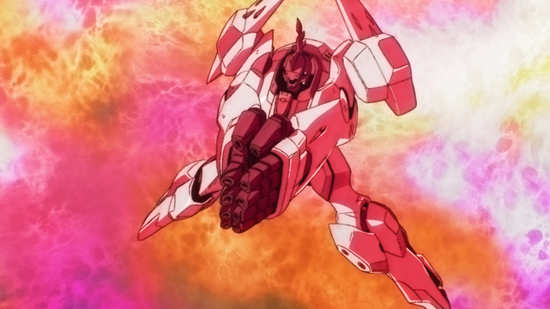 The first few episodes are a back and forth between Ameria and The Capital Territory, as well as the mysterious girl from the stars Raraiya, who is addled at this point, playing with a fish in a globe of water. The next stop is the moon, where they discover a thriving colony, itself split into factions, the Towasanga, and the Dourette Army. Next it’s to the Venus Globe, who seem generally friendly, except for the G-IT Corps, who seem to want to kill everyone. Throw in the Space Pope, a bunch of taboos, and a whole heap of jargon, and you’ll need to take notes to just keep up. To make matters all the more confusing, the two main protagonists get a Luke and Leia back-story that really doesn’t mean much in the context of the show.

If that isn’t enough, you may as well give up trying to tell apart the good guys from the bad guys, as allegiances and alliances are fluid and transitory in this show, with people hating each others’ guts one episode, and then the best of friends the next, before trying to kill each other again the following week. My own personal pet peeve is that there’s one character called Luin, and another named Luan, and it took me ten episodes to realise that they were different people. 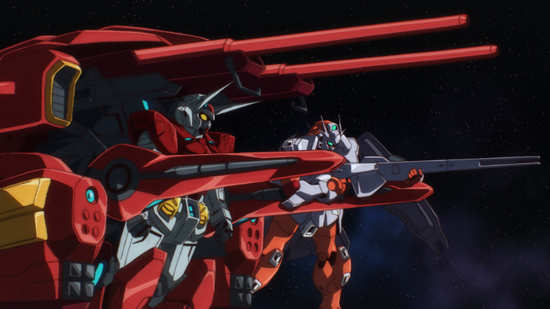 As near as I can figure out, basically everyone hates everyone else, Ameria hates the Capital Territory for holding all the power, most of the space people hate the Earth because they believe they belong there, and there’s a lot of class hatred between some people called the Kuntala and everyone else. It turns into a free for all, but it’s unclear what anyone’s fighting for. Bellri doesn’t want to kill anyone after he killed Aida’s boyfriend, but keeps getting into fights and killing people anyway, uttering the immortal line, “I’m going to shoot at you, so don’t die”. Big arse war! Lots of giant robot action, loads of people dying, and at the end, all of the survivors who up to that point hated each other, all become best friends, except for Klim Nick, who lands a spaceship on his dad to teach him a lesson. 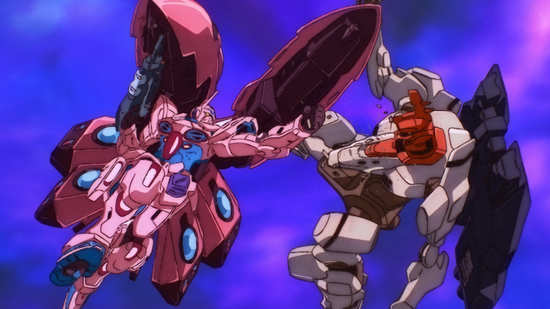 So there you have it. I haven’t the slightest idea what Gundam Reconguista in G is about, but it sure was pretty while I watched it, and if you twist my arm, I’ll even admit to being entertained by it. But it really should have got a decent 100 episodes to properly develop the characters, and make the story comprehensible.