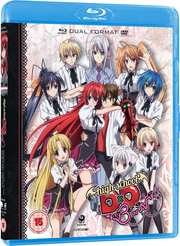 Synopsis:
Issei and his harem of hotties are back to take on their biggest, boldest, bounciest adventure yet as they fight to prevent Ragnarok aka the end of the underworld!

With summer vacation just around the corner, Issei's got one thing on his mind spending sunny days with bikini-clad babes. Unfortunately, the Chaos Brigade is planning something big, and with heavy-hitters like the Norse God Loki in their corner, the House of Gremory is going to have to survive Rias' underworld boot camp if they hope to stand a chance. While they prepare, dark forces gather strength behind the scenes, Koneko's family reunion turns into a real catfight, and Asia must survive an indecent proposal from a high-ranking demon. With plenty of balls-to-the-wall battles and bare-it-all beauties, fans of High School DxD should start making room on the shelf their perfect pair is about to become a Menage a trois.