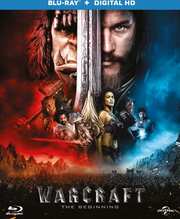 Warcraft is a film adaptation of the hugely successful online game in the vein of a Dungeons and Dragons RPG. What follows is an epic movie of strange worlds, mythical creatures, magic and war.

The Orcs homeworld of Draenor is being destroyed by a mysterious force and their only way to solve this is by sending a massive army known as The Horde through a portal to Azeroth. They can can sacrifice whoever they capture to keep the portal open and bring the rest of them through the portal.

The people of Azeroth do not take kindly to the Orcs coming in and capturing their kind. This leads to many battles and encounters in Azeroth of a bloodier and bloodier nature leading to all out war.

Now, I must start by saying I have never played Warcraft and my only knowledge of it is from the Make Love Not Warcraft episode of Southpark and the adverts that starred Mr T. I have no idea how close this film is to the game and novels it inspired, but I would say that it did not feel like I needed to know much back story to watch this film. It is true that the film spends no time and by no time I mean no time explaining the world in which all of this takes place. This is both great as I am not bogged down in exposition, but also not so good as I felt at times that I had no idea what was going on and maybe a little heads up as to how these worlds worked would have been a good thing.

However, despite the obvious Lord of the Rings comparison, this film isn't as bad as a lot of people have made out. It is true that most of the CGI looks like cut scenes from a game, that the dialogue and whole plot of the film all feel cliched beyond belief and the film is simply far too long, but it's still not a bad film, just not a great one either and certainly not the epic masterpiece many people expected. Myself? After so many years of awful video game adaptations (Streetfighter and House of the Dead anyone?) this was much better than I expected.

My biggest issue with this film is that nothing much happens. I wouldn't want to spoil it, but after watching I think I could sum the film up from beginning to end in one-two lines. That's not a horrible thing, but it does make the film feel a little lost. At times I felt like I was watching just cut scenes from a game (not helped by the CGI) and then it was just fight scene after fight scene. If you are just looking for relentless action then this film ticks every box, but really I wanted a bit more than that.

This Bluray is jampacked with special features and so if you enjoyed the film or are a fan of the franchise you will enjoy much of what is here. There are five featurettes regarding almost every aspect of the creation of the film.

The World of Warcraft on Film looks at every aspect of the film across six featurettes: Origin Story, The World of Talent, The World of FX, Outfitting a World, The World of Mo-Cap and The World of Stunts. These are all good, but I do wish they had just been part of one long documentary or included a 'Play All' option rather than having to come back to the menu after each one.

Fandom of Warcraft looks at the immense fanbase the game has at things like Blizzcon and just how Warcraft has affected them. Warcraft: The Madame Tussaud Experience looks at their exhibition of Warcraft characters in London which is pretty spectacular and definitely worth a look if there.

Warcraft: Bonds of Brotherhood motion comic is almost a feature film in itself. It is, as it says, a comic story told with voice acting and motion comic animation moving from pane to pane and it is a pretty great story.

ILM: Behind the Magic of Warcraft is a look at the work that the infamous Lucasfilm studio put into creating this world and making it look as amazing as it does. We get to see a lot of splitscreen comparisons and how the layering of certain effects created the shots. However, it is just shots with no explanation and probably would have been better with a voice over explaining what they did.

There are eleven Deleted and Extended scenes which are all fine and other than for time or pacing I'm not sure why they were deleted, but the film doesn't lose or gain anything from them.

The Gag Reel is a quick look at various moments of the cast missing lines or just goofing around of which none are hilarious. Finally we have the 2013 Teaser Trailer which is nice, though having no other trailers or promotional things is a bit strange.

By the end of this film there is definitely a feeling that this is the first part of a much larger story. It is bizarre that they did not keep 'The Beginning' as part of the title as it would have made this a bit more enjoyable to know that after all this we would go on to something else in the sequel. It is unknown as to whether that sequel will appear as (despite earning over $400 million) this was a box office bomb and has been critically panned by most people.

I don't think that Warcraft deserves the hate, but I do understand where most of it is coming from. It is true that this is a very cliched film that is far from original, but it is was a fun action/adventure and one that clearly has more stories to tell and hopefully the next one focuses a bit more on story and a bit less on mindless violence.