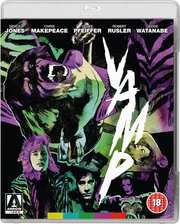 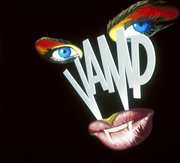 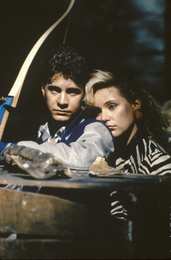 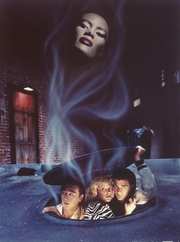 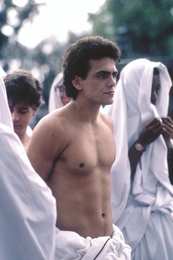 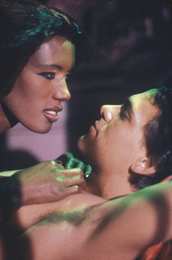 I’ve been chasing my lost adolescence of late with the films that I have been revisiting, films that I might have seen once or twice in my teens, and which had a lasting effect on me, but which I haven’t had the opportunity to watch again since. Oddly enough, it’s actually the Blu-ray revolution that has inspired studios and distributors to go hunting for these lost gems. I guess when DVD came along, and only fifteen or so years had passed, there wasn’t the same sense of nostalgia that there is now. Back then, they may have warranted a barebones, quick DVD release, but now they are getting the attention they are due, with re-mastered transfers, and feature-packed discs.

When I first saw Vamp on late night television, I can tell you for free what attracted me to the film. It wasn’t the vampires, and it wasn’t Grace Jones. It was the strip-club mentioned in the TV listings blurb. I was a teenager after all. The horror comedy came as a bit of a shock, and even more shocking was that I enjoyed the movie more than the brief glimpses of female flesh. Vamp was something of a ground-breaking movie after all. Up to this point, the vampire movies I had seen were of the gothic, Dracula vein (pun intended). Vamp reinvented the genre for the modern vernacular, with vampires that belonged in the nineteen eighties, sexy and cutting edge. Vamp begat From Dusk 'til Dawn, and Buffy the Vampire Slayer, giving us horror with wit and style on top. Of course now vampires twinkle, and it’s not as much fun. 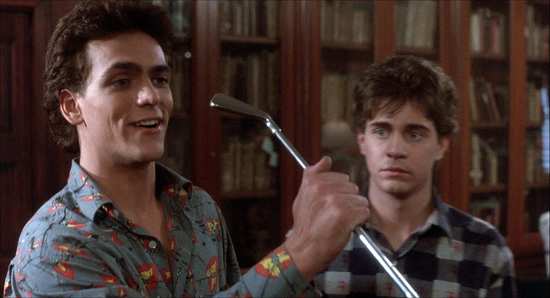 Best friends Keith and AJ want into a college fraternity. Not that they are the perfect pledges, but they’d do anything to get out of the fleapit dormitory on campus and into some habitable lodgings. This particular fraternity could do with some entertainment for their next party, and the ever-confident AJ promises to get them a stripper. That means going into town to a strip club to interview some talent. The problem is that they aren’t exactly in the entertainment capital of America. But, the After Dark Club offers some promise. The journey there is a little weird though, but not as weird as the club itself. There’s a reason it’s called the After Dark Club. You won’t see any of these strippers in daylight!

Vamp gets a 1.78:1 widescreen 1080p transfer on this disc, and it’s pretty fair. The image is mostly clear and sharp throughout (except for one rather soft shot), colours are neon, pastel and consistent, and there’s a natural level of film grain and even some flicker. It looks like just what it is... a film. I love it when a film’s transfer to Blu-ray is done with the minimal of interference, just a clean print transferred to the digital medium, but in Vamp’s case, there was not enough interference, as the odd fleck of dirt, the occasional sign of age is apparent on the print. It could have done with a little clean. But the film is stable, with no major damage, and it is watchable throughout (although one blooper has crept into Katrina’s final scene). 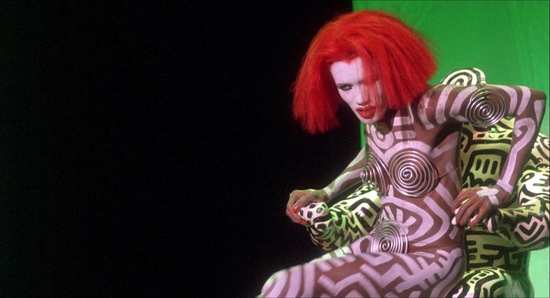 As my allusion to the colours indicates this film very much belongs in 1986. With its colour scheme, production and costume design, Vamp has the pop video stylings that many feature films had back in the eighties, plenty of colour gels and odd camera angles, and possibly the cleanest and brightest sewer in cinema history.

There’s not a lot that I can say about a PCM 1.0 mono audio track, other than it’s clear throughout, free of glitches, and authentic to the film’s original release. It’s obviously front-focused, the dialogue is clear throughout, there’s no distortion, and it has good dynamic range. SDH subtitles are provided should you need them. 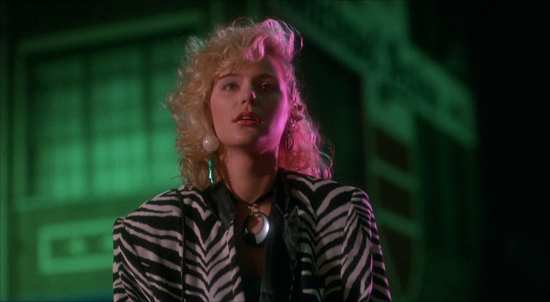 The disc boots straight to an animated menu.

One of Those Nights lasts 44:30, and is a documentary looking at the making of the film, with interviews with the cast and crew. It’s an interesting watch, entertaining and informative, and watch out for the Grace Jones anecdotes. This is in 1080p.

Dracula Bites the Big Apple is a short film from director Richard Wenk, which lasts 22:03, and is in 480i. In it, the be-fanged Transylvanian one pays a visit to the city that never sleeps.

The Image Gallery is in 480i and has a few dozen stills, behind the scenes shots, and promo imagery.

The first run release of the Blu-ray will also have a booklet with an essay from critic Cullen Gallagher. 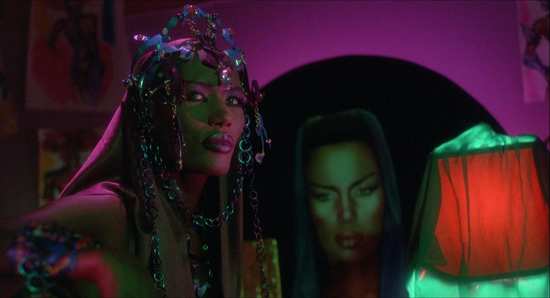 I enjoyed Vamp the second time around, although it’s hardly as sexy as I recall. As a teenager I doubt I’d have noticed the tired seediness of the After Dark Club, while Grace Jones may bring her unique brand of weird to the role, sexy is the last descriptive that springs to mind. But, Vamp is just as much fun as I remember, an entertaining horror comedy, which begins with the promise of some Porkys like comedy, with the fraternity antics and colourful adolescent characters, before taking a left turn into the neon highlighted horror nightmare. But I have to say that the vampires are really just a Maguffin in this movie, other than the maitre’d of the club (and one other whose name would be a spoiler), they universally lack for character, and really just motivate the protagonists.

That’s because Vamp actually belongs to another mini-genre of movie that was prevalent in the eighties. There were quite a few after dark movies, that took regular characters, and threw them in at the deep-end in recognisable locations turned wholly alien once the sun set. Martin Scorsese’s After Hours is perhaps the defining movie of the type, but you can also count The Warriors, and Escape From New York as typical. Vamp fits right in with its tale of a group of college students finding themselves out of their depth once the sun goes down, and what should be a run down, mostly empty city location, becomes an eerie and otherworldly hunting ground, where nothing is as it appears. 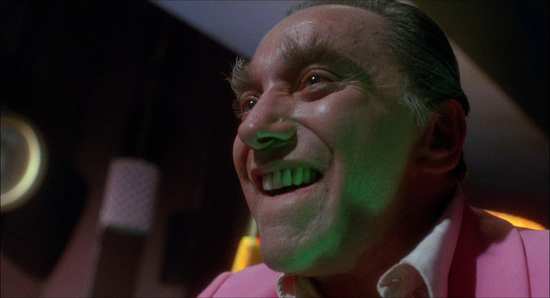 Most of these films are actually rites of passage, about putting a protagonist through the wringer over a period of twelve hours, forcing their character to adapt and grow through the trials that they face. Vamp’s protagonist is Keith, who at the start of the movie is perfect sidekick material. It’s AJ that is the mouth in their friendship, the outgoing, verbose, attractive guy, and Keith is the best friend who supports AJ in his antics, shares in them most of the time, but also acts as the handbrake when AJ goes a little too far. But he’s also a little inexperienced in comparison, and more naive, as we learn when they first go looking for the After Dark Club, stop off in a cafe, and Keith flirts with the wrong girl. It’s confident AJ that comes to his rescue.

All of that changes when they get to the club, and they get separated. AJ goes off with Katrina after her set, to try and negotiate a deal and then just vanishes. When Keith tries to find him, no one admits that AJ ever went back there, and it’s down to Keith to find his friend. Only this isn’t the kind of neighbourhood where he can flag down a police car for help. He has more on his plate dodging the gang he antagonised earlier, led by an unsettling albino and as he quickly realises, actual vampires as well. And then there’s Amaretto, the waitress from the club he picks up. She recognised him the moment they walked in, but he can’t remember her, and she’s intent on jogging his memory, regardless of the lethal mayhem that’s going on around them. 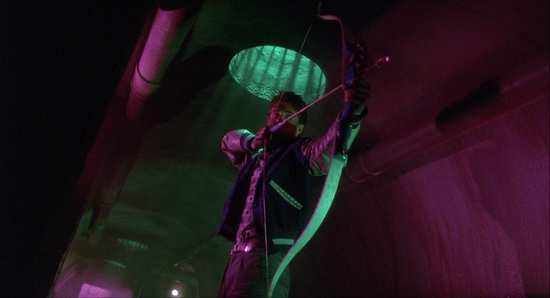 Vamp is funny, and it works pretty well as a horror also. But I have to admit that I missed the social commentary alluded to by the director in the extra features. It doesn’t feel quite as deep and allegorical as all that. It’s really just a fun eighties movie that has aged well over the years. The film gets a solid Blu-ray presentation, although the print could have used a little cleaning. The extra features are well worth watching too, and complement the film well.