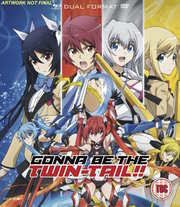 Gonna Be The Twin-Tail!! (Blu-ray Details)

Review for Gonna Be The Twin-Tail!!

You’re probably wondering right now just what a twin-tail is, which would be useful to know before continuing with this review. Also known as girly pigtails, handlebars, or bunches, it’s a type of hairstyle where the hair is gathered into two "tails" on either side of the head (Think Punky Brewster). In terms of this show, it’s an example of the anime industry’s ability to turn absolutely anything into a fetish. It’s also an example of a show with a deliciously daft and over-the-top premise. Gonna Be The Twin-Tail is Funimation’s second direct release to the UK, and once again it comes in BD/DVD combo format. I’m just looking at the Blu-rays for this review. As with any new venture, there are teething issues, and this second release has been delayed more than a bit. But was it worth the wait? 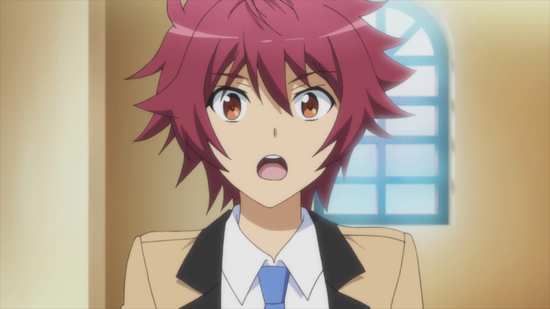 Soji Mitsuka has a particular fetish. He’s drawn to twin-tailed girls (although not quite so much his childhood friend and neighbour Aika), and the new year at school means a whole new batch of girls sporting that perky hairstyle to get his blood flowing. This year he’s even gone as far as suggesting a Twin-Tailed after school club to celebrate his fancies. But Soji’s world might be about to come to an end. Aliens have invaded, aliens of the Ultimaguil, who are after Earth’s Twin-Tail attribute. They’re targeting twin-tailed girls and zapping their twin-tailness, reducing them to mundane hairstyles, and removing all memory of Twin-Tail from the world. But there may be hope in the form of a busty, grey-haired girl named Twoearle, who says she’s come from another world to save the Earth from the Ultimaguil, and with Soji the epitome of twin-tail fetishism in the world, he’s perfect to be a hero of justice. All he has to do is to put on the bracelet of power and transform. And transform Soji does, into a pint-sized, red-haired, twin-tailed heroine of justice? 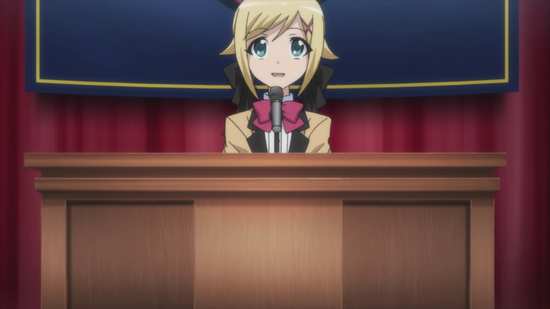 Twelve episodes of Gonna Be The Twin-Tail!! are presented across 2 Blu-ray discs from Funimation. 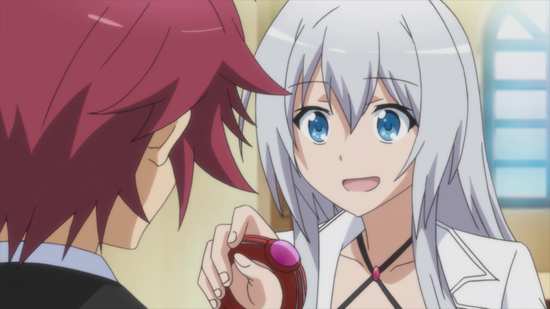 Gonna Be The Twin Tail gets a 1.78:1 widescreen 1080p transfer on these Blu-rays. It’s a nice, clean transfer of a recent anime, although the show’s comedy aesthetic does tell in the simpler visuals, the bright, primary colours, and the comparatively less dynamic animation. This is a show that goes for the visual gag jugular first and foremost, and making it look uber pretty, or bringing out lush detail isn’t a priority for the animators. That said, it still has the odd moment of banding in darker scenes. Still, while the character designs are pretty generic twin-tail girl fare, the characterisations are individual enough to make the anime memorable.

The images in this review were kindly supplied by Funimation.

You have the choice between Dolby TrueHD 5.1 Surround English and 2.0 Stereo Japanese, with subtitles and signs locked to the appropriate audio stream. I went with the Japanese with subtitles as usual, and was happy enough with the experience, with enjoyable voice actor performances, enthusiastic about the comedy, and suiting their character archetypes well. I gave the dub a brief try, and after five minutes hadn’t turned it off, so it must be one of the good ones. The subtitles are accurately timed and free of typos. The theme songs (other than a high-pitched ‘Rescue!’ aren’t particularly memorable, but they suit the tone of the show well. 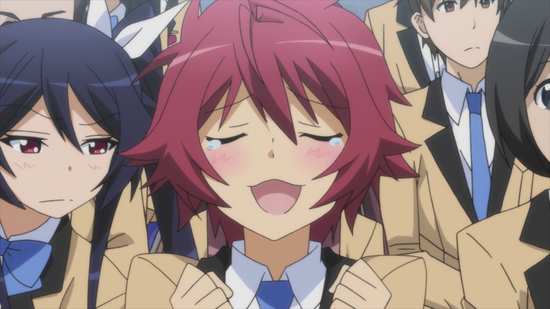 The sole extra is the commentary on episode 1, featuring the voice of Soji, Austin Tindle, and Morgan Garrett who voices Twoearle.

Disc 2 autoplays with a trailer for Lucky Star.

You’ll find the player locked subtitle plastered opening and end credits (It’s easier, but less accurate to type ‘textless’). You’ll find the US Trailer for the show and further Funimation trailers for The Girl Who Leapt Through Time, Fairy Tail, Tokyo ESP, Date A Live, Noein, Selector Spread WIXOSS, Yurikuma Arashi, and The Boy and the Beast. 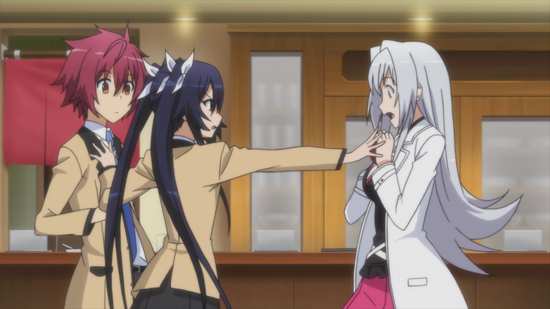 Gonna Be The Twin-Tail is a comedy with a ridiculous, nay, patently daft premise. The trick to such comedies is to embrace the daftness wholeheartedly, dive in without any reservations, and never stop to think about just how silly the whole thing is. Gonna Be The Twin-Tail does exactly that. It takes its absurdity and makes the most of it, fills the screen with colourful characters, nutty notions, and succeeds in every respect. It works because it is so much fun. 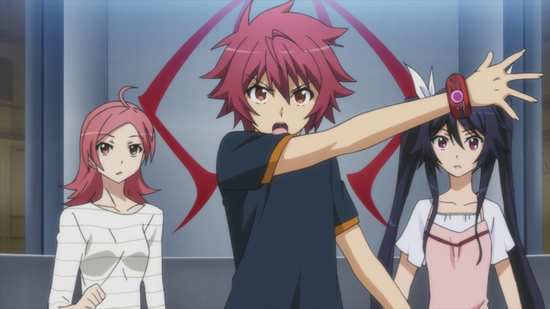 The show is all about fetishes, beginning with the Twin-Tail fetish that is the main character’s driving motivation. He obsesses over the Twin-Tail hairstyle that young girls sport, and he’ll do whatever it takes to promote that desire, including requesting that a Twin-Tail club start up at school. So far, so innocent, if creepy, but it transpires that in this universe, the power of such fetishes is tangible, and can be exploited. Aliens arrive, the Elemelian Ultimaguil, who are looking to drain the Twin-Tail attribute from Earth, completely eliminating the hairstyle as if it never existed. 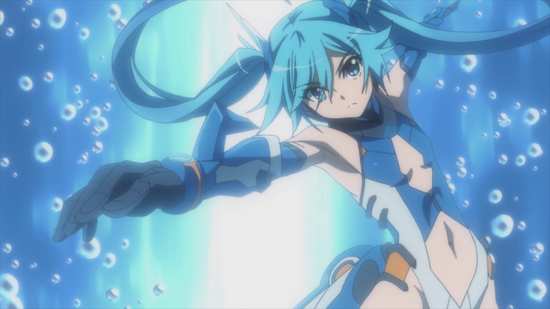 Ahead of them arrives Twoearle, a survivor from one of their previous targets, who has taken her Twin-Tail attribute, infused it in a bracelet of power, and is looking for the ultimate Twin-Tail warrior to defend the Earth against the Elemelians. It just so happens that the person with the strongest feelings for Twin-Tails on the planet is Soji. He gets the bracelet, and when he activates its power, he turns into a short, spunky, Twin-Tailed female warrior of justice. Pretty soon the ranks of the defenders grow, when Soji’s neighbour Aika and Student Council President Erina join. 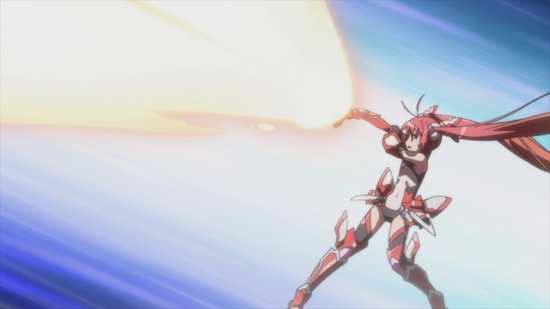 Following the fashion for such shows, with the team of defenders (Red, Yellow and Blue) protecting the world, the Ultimaguil send down warriors on a regular basis to attack and steal the Twin-Tail attribute. Each of these warriors is based on an animal, and has a name that ends with –Guildy. Characters like Spiderguildy, Wormguildy, Foxguildy, Buffaloguildy and Crabguildy all plague the Twin-Tail defenders on a regular basis, and on top of that, they each have their particular fetishes which they aim to promote, whether it’s big breasts, small breasts, girlyboys, nurses, maids and more. Just to make things complicated, this menagerie of Elemelians has a human leader, Dark Grasper, who in another life was an obsessive fan of Twoearle when she was a Twin-Tail warrior on her own world. 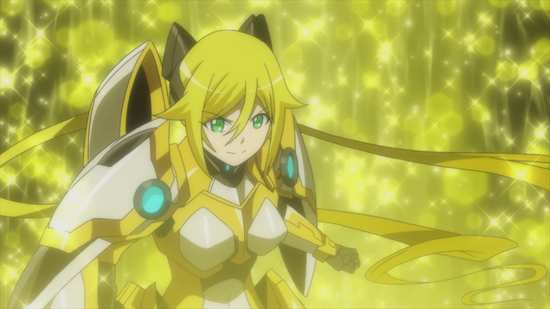 The characterisations also make for great comedy. Soji is the obsessive Twin-Tail fan who somehow is less enthused with the hair of his childhood friend and neighbour Aika, despite her obvious affection for him. When the busty Twoearle arrives and shows an obscene interest in Soji (perfectly acceptable to Soji’s mother), that flicks Aika’s violent switch. So whenever Twoearle drapes herself over Soji, or comforts his face in her bosom, Aika responds by delivering extreme pain to Twoearle. Then again, that violent streak has a mixed effect in their battles against Ultimaguil, with her sensitivity about her yet to develop cleavage inciting great torrents of violence in their battles that serves her well, but all the fans that they pick up may hold Tailred (Soji) in high regard, but tend to think of her as a violent appendage at best, another enemy at worst.

Then there’s Erina, the reluctant at first Tailyellow. She’s the prim and proper, childlike student council president, but her bracelet of power actually transforms her physically into a tall, busty woman (much to Aika’s consternation who tries to swap bracelets), and it turns out that the more clothes she loses, the stronger she gets in battle. This masochistic streak transfers over into her daily life as well. 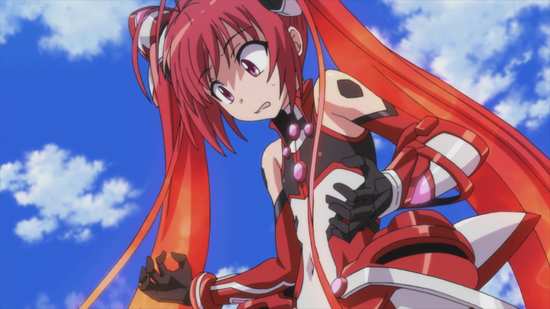 It is a daft story, but there are no winks to the camera, it’s all played perfectly straight with total belief, and that’s what makes it funny. It’s not the greatest show ever. The animation and character designs are pretty generic, and the quality of the animation can slip on occasion. It doesn’t do anything stunning in terms of its visuals, doesn’t stray too far from the usual character and story stereotypes and tropes, and it has the usual reliance on fan service. I’d call it a poor man’s Kill la Kill, but the final word is that Gonna Be The Twin-Tail is fun.