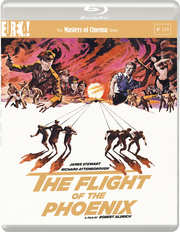 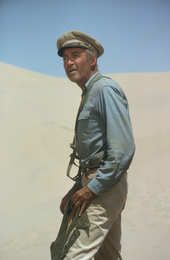 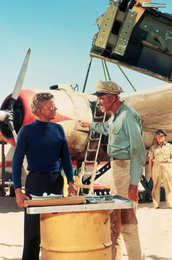 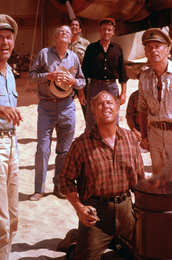 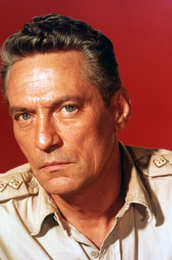 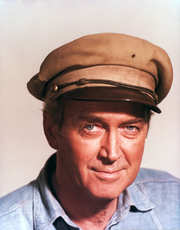 DVD
Too Late the Hero (UK)

Review for The Flight of the Phoenix (1965) (Masters of Cinema)

You know a film is a bona fide classic if they go and pointlessly remake it. It’s a trend that really kicked off with Gus van Sant’s Psycho, and has accelerated over the years as Hollywood’s penny-pinching fear of originality has sent it ever in search of guaranteed hits, resurrected from the past. You’d think that they’d pick over the bones of the flops of yesteryear instead, hoping to get things right the second time around. The Flight of the Phoenix is one film that didn’t need such a remake. It got things right first time with a gripping adventure story that has thrilled me time and again, ever since I first saw it as a child. Although ironically, it transpires in the extra features that the original flopped on initial release, making back barely half its budget. That’s surprising given that it’s become such a mainstay of the Sunday afternoon matinee over the years. 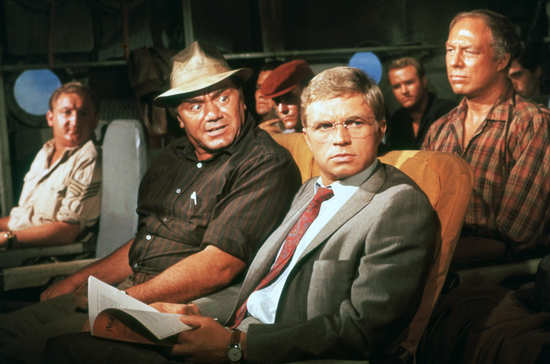 Pilot Frank Towns is in command of a flight in North Africa, ferrying a group of oil workers and a couple of hitchhiking soldiers to Benghazi, when the plane gets into trouble during a sandstorm. It’s forced down in the Sahara Desert, in the middle of nowhere. It quickly becomes clear that rescue is unlikely, and their water won’t last long, and the terrain and blistering climate precludes trekking out of there. But against the inevitable, a passenger comes up with a radical idea, rebuild the plane. 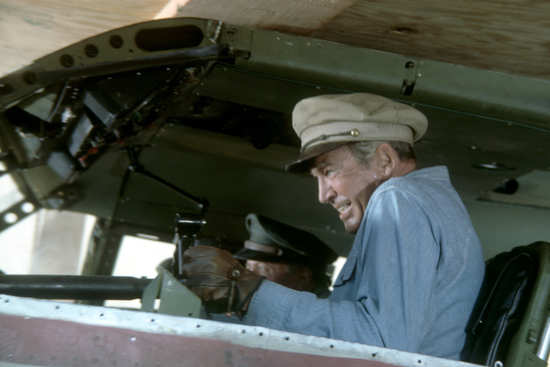 The Flight of the Phoenix gets a 1.85:1 widescreen 1080p transfer. Eureka offer a faithful presentation of the film as always, the image is clear and sharp throughout, any signs of damage and age have been mostly removed, and the image is stable, with a natural level of film grain. I did notice a couple of frame jumps, and the odd hair in the shutter, but this is a great transfer of a vintage film. Detail levels are excellent, although it does seem odd to have such an epic looking film not in scope format. The flight sequences come off well, while the few effects sequences are pretty seamless. The make-up certainly looks impressive in high definition, as the characters suffer progressively under the desert sun. 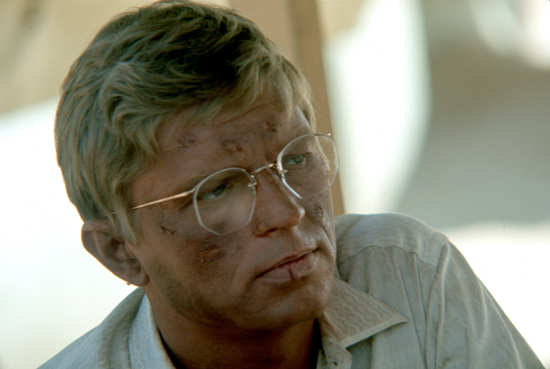 The audio for the film is a PCM 2.0 mono English track, and it is authentic for the period, not quite as dynamic as more modern audio, but generally clear throughout, aside from the odd pop during quieter scenes. The dialogue is clear and audible though, and there is no distortion. The film’s music certainly speaks of the isolation of the deep desert, and while everything comes from the centre speaker, the action sequences certainly are effective nevertheless. The overall volume level is a tad low though, but easily remedied. 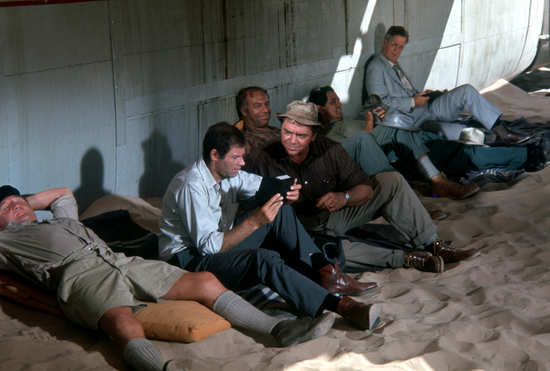 The disc boots straight to a static menu, saving the copyright warning for after the end of the film.

On the disc you’ll find the film’s trailer (3:08 HD), and an Isolated Music and Effects track in PCM 2.0 format.

The most substantive extra feature is the interview with Sheldon Hall, which lasts 25:32 in HD, in which he discusses director Robert Aldrich and the film, also offering a brief comparison with that pointless remake I mentioned at the start of the review.

As with all Masters of Cinema releases, you also get a booklet in the case. I’ve had a look at the 20 page pdf file, and took in the essay on the film by Neil Sinyard, illustrated with stills from the production and found it to be a useful complement to the Sheldon Hall piece on the disc. 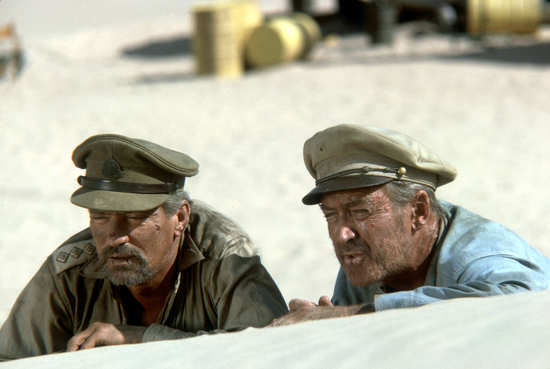 The Flight of the Phoenix still holds a special place in my heart as the boys’ own adventure film that I grew up with. It still works today, a tale of a group of unlikely characters, working together to survive against the odds. The odd thing is that I never saw The Flight of the Phoenix as a disaster movie until I watched the extras on this disc, but it really does fit into that genre, presaging the disaster movies that would come a decade hence. The Flight of the Phoenix is small; it’s about a small cargo plane crashed in the middle of the desert, not an Earthquake or a Towering Inferno. But it’s a disaster movie in microcosm, about the characters having to work together to survive, and their personalities getting in the way. You also have the same ‘game’ about wondering which ones will survive to the end, and who will fall along the way. 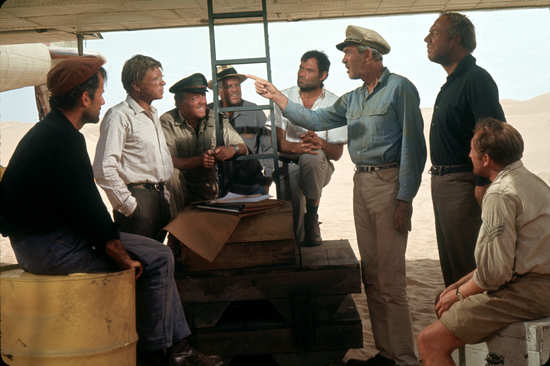 The story is the skeleton of the film, and is probably so well known by now thanks to the Sunday afternoon TV showings, that it’s difficult to spoil, the plane crash in the desert, and the survivors of the crash building a new plane out of the wreckage of the old. But it’s really the characters that provide the meat on the bones, and the conflicts that arise between them that make this film such a perennial favourite of mine. The film also throws you into the thick of things, with no back-story to inform your preconceptions. You find out about these characters as you go along. Ernest Borgnine’s Trucker Cobb is a case in point, an unlikely oil worker, he’s more childlike and petulant, and following the crash, a liability. But it’s only as the story unfolds that we learn the reason for this, that he’s not going to Benghazi through choice, and that he has an understandable resentment towards Dr Renaud, also on the flight. 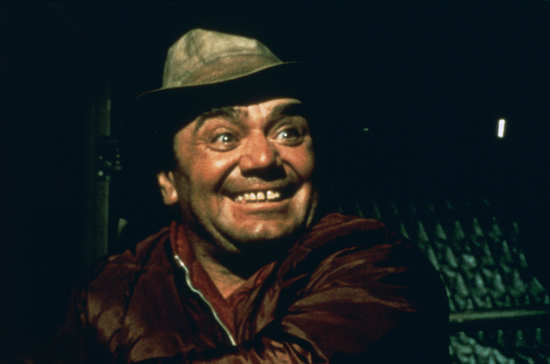 Those that you’d expect trouble from, Standish and Bellamy, are surprisingly quiet and co-operative, a result of Dan Duryea and George Kennedy being cast against type, pretty much as supporting roles. Crow is the pain in the neck on the other hand, a man who refuses to take things seriously, and can only deal with the situation by needling the others with petty and sarcastic remarks. It falls to the flight engineer Lew Moran, in a great performance from Richard Attenborough to be the glue that tries to hold everyone together. The person who should be doing this, Captain Frank Towns has his hands full, first with by turns dealing with and avoiding the guilt he feels over the crash, and secondly pretty soon he’s locking horns with the genius engineer Heinrich Dorfmann who comes up with the hair-brained scheme. It’s a compelling antagonistic relationship between James Stewart and Hardy Kruger as the pair jockey for authority in the situation. It’s made all the better by casting Kruger in the role of Dorfmann, a very Nazi-ish German not twenty years after the end of the war, clinical, egotistical, and wholly lacking in empathy, yet the one man who can conceivably save them. 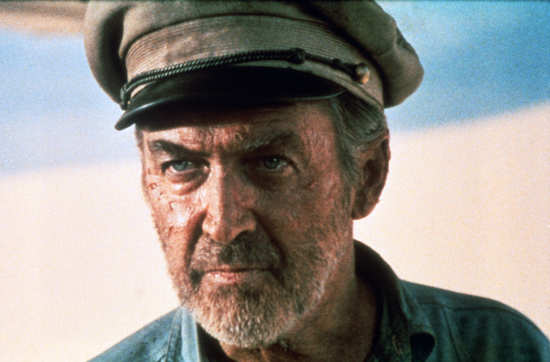 Yet my favourite characters are Captain Harris and Sergeant Watson, the two epitomising the ever present class conflict in the British system, compounded by the eternal resentment of the officer classes by the enlisted man. The long suffering non-com barely tolerates his superior, but that tolerance quickly vanishes when they’re thrown into a situation where all should be equal, but Harris insists on maintaining the chain of command. There’s a part of you that will look down on Watson for his insubordination and cowardice, but there’s also a part that will recognise that he’s also right, and that Harris’ ‘Mad Dogs and Englishman’ approach to the situation is practically suicidal. 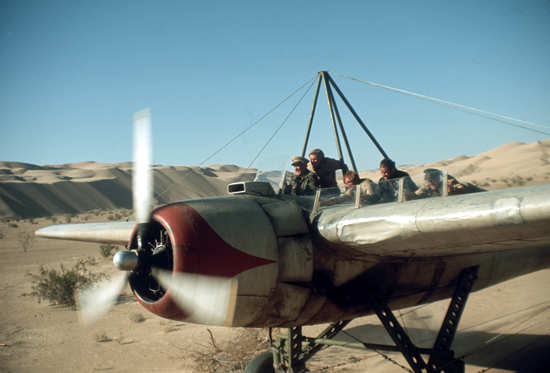 The Flight of the Phoenix is still one of my favourite feature films. It has an all star cast at the top of their game, bringing to life a group of characters that fill the screen. It’s the kind of film that I have a lot of time for, the triumph of the human will against adversity. Eureka Entertainment’s Masters of Cinema release brings out the best of the classic, and it’s well worth picking up.

A lovely, affectionate review. This is definitely one for the 'wants' list! :)
posted by Stuart McLean on 9/9/2016 22:11
The original as seen here, is best. The more modern version not as good.

Acting and story is gripping and defininately the best.

I do have this in my DVD collection already and this review wanrs me to get it out and watch it again.
posted by bandicoot on 28/9/2016 18:06