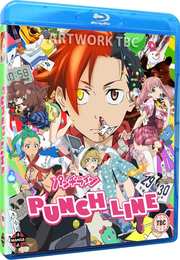 If you say the show’s title, Punch Line with a Japanese inflection, it sounds more like Panty Line, which is wholly appropriate, as this show is all about the panties. Female underwear abounds, adorning the young female form, displayed in all sorts of titillating poses, not least of which is the classic crotch shot, and the show stars a protagonist whose reaction to said panties is extreme to say the least, high pressure nosebleeds that threaten the fabric of reality itself. This might be par for the course for Japanese anime you might think, except that Punch Line comes from the noitaminA strand of animation, the more adult, considered, and refined brand that has given us shows like Eden of the East, Princess Jellyfish, Bunny Drop, Kids on the Slope, Psycho Pass, and Ping Pong, shows that are meant to expand the anime audience beyond the usual demographic. So what the hell are they doing with a show like Punch Line? It’s a show aimed right at that young male demographic, it makes you think that noitaminA are giving in to market pressure and joining the rest of the industry in appealing to the lowest common denominator. Or could Punch Line be one of those sly and subtly subversive shows, turning audience expectations on their head? 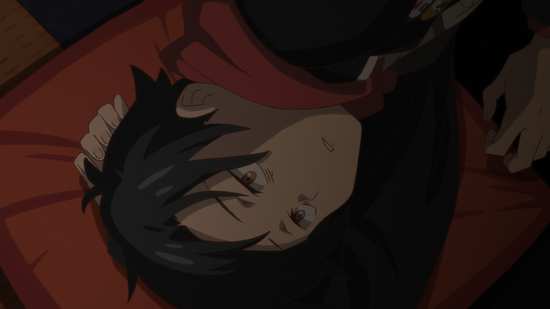 Yuta Iridatsu is a boy with a problem. Okay, living under one roof with four pretty girls wouldn’t be too much of an issue, but he’s just been through a traumatic hostage crisis on a bus, and he’s been disembodied as a result. We’re talking serious astral projection here, his spirit has left his body, which would be strange enough, except his body is still walking and talking. On top of that, the world is going to end in 10 days. New Year’s Eve is going to be pretty unpleasant when that meteorite hits. Maybe in his spirit form, he can avert disaster. Fortunately he has the aid of a talking spirit cat named Chiranosuke. Even better, this typical teenage male gains superpowers if he happens to glance at panties adorning one his female housemates. But the problem with that is if it happens twice in a row, he overreacts in his spirit form, to the point that the world ends even sooner. So finding out who’s walking and talking in his body right now is the least of his problems, especially when no one is who they appear to be. For one thing, the landlady is a robot...

12 episodes of Punch Line are presented across two Blu-rays from Animatsu. 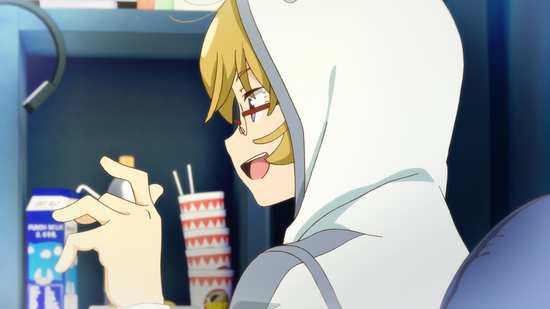 Punch Line gets a 1.78:1 widescreen 1080p transfer, and it’s a really decent effort, clear and sharp throughout, with strong, vibrant colours, and no signs of compression or banding to my eyes. The show deserves it as well, as it is a visual feast of imaginative imagery, energetic and fluid action animation, and no little fan service. The high definition presentation serves Punch Line’s wacky and zany aesthetic well, one that very much aims for the comedy jugular. The world design is comparatively simple, while the character designs are cute and appealing (a little reminiscent of Soul Eater’s). 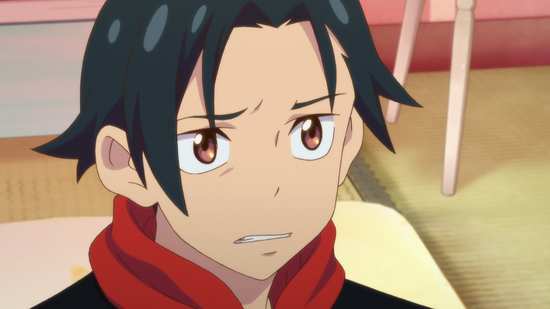 You have no choice at all this time, just a DTS-HD MA 2.0 Stereo Japanese track with locked English subtitles. It’s a fine enough audio track, hitting all the right notes when it comes to presenting the action sequences, the actors suited well for their roles, and the show getting some really engaging incidental music to drive the story. The subtitles are timed accurately and are free of typos.

The sole extras are on disc 2, and amount to the textless credits (1 opening, 3 endings), and trailers for Momokyun Sword, Wizard Barristers, Blade Dance of the Elementalers, and Gugure! Kokkuri-san. 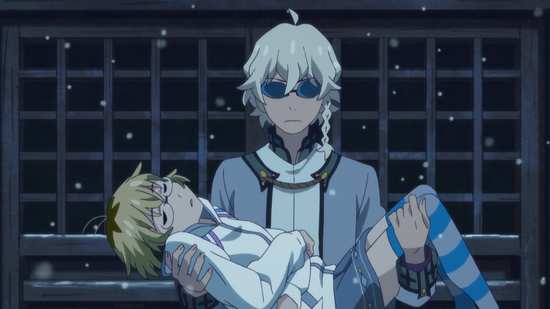 I was not expecting good things from Punch Line. The premise is a little daft, and plays a little too much too the fan service end of the audience for comfort, when it comes to a noitaminA show. On top of that, all that I have read about the show, the review grades I’ve skimmed past, have had this show languishing in the mediocre, also-ran bargain budget end of the anime swimming pool. Not a lot of people have lavished praise on Punch Line. Well, I’m going to buck that trend, as I liked Punch Line a lot. This is a show that really appealed to me. It’s got a World Conquest Zvezda Plot sensibility to its story, nabbing a little FLCL for its zany art style, and you can throw some Endless Eight and Groundhog Day into its plot too. It’s a high concept story presented in lowbrow attire, a time-twisting, mind (and gender) bending plot wrapped up in a lingerie shop full of panties and exploitative camera angles.

I can invoke my reviewer ‘get out of jail free’ card here, and state that the plot is one that doesn’t deserve spoiling in a review. This is one show that is more rewarding without having its best bits blabbed about before you watch it. The thing is that it’s also a show that you really do have to stick with. I was on the verge of agreeing with the majority when I started watching it, as it certainly revels in the fan service comedy and the wacky characters to the detriment of the plot, or so it seems. Yuta finds himself disembodied following a traumatic experience, and with the aid of a spirit cat, he has to figure out what’s going on, learn what he is capable of, and find out how to save the world. He also gets to find out what his housemates are really like, and it turns out that everyone is hiding a secret or two. 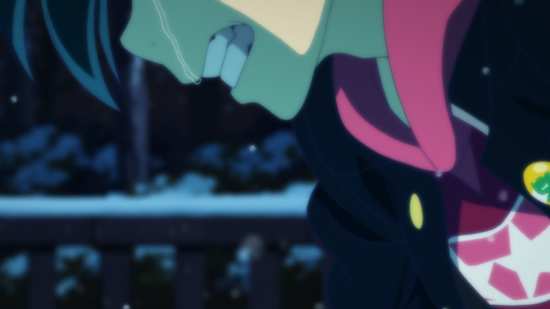 The thing is that it feels like half a story at this point, you’re getting a lot of the pieces of the puzzle, but you don’t know how it goes together. The show relies on its fan service comedy to keep the momentum going, and if the “Yuta + panties = nosebleed + end of world” equation doesn’t resonate with you, it’s easy to see how a viewer might be put off. This is one show that you really do have to stick with though, for at the halfway point, Punch Line pulls its masterstroke. It revisits the events of the first half, the ten days worth of narrative from a wholly different perspective, and the pieces of the puzzle start fitting together.

To quote a certain Time Lord, Punch Line gets “Wibbly wobbly, timey wimey” with its story, and you wind up burning as much grey matter as you might have done with films like Memento, or Donnie Darko. That’s on top of the comedy and the panties. But the writers of the show have done a solid job with the story, and if you give it a little thought... okay, a lot of thought, then you’ll find that Punch Line hangs together really well, and it’s not quite as riddled with plot holes and logic gaps as the usual time jumping narrative. 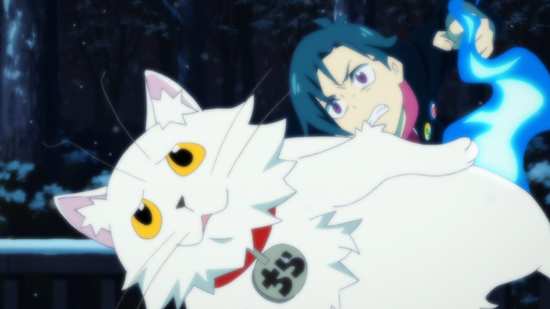 Maybe it’s the sci-fi fan in me, but Punch Line resonated with me a lot more than I expected. It also even managed to subvert the fan service clichés, although not by turning them on their head so much as just exaggerating them beyond all belief. A character’s superpowers activated by a glimpse of underwear is daft enough, but two glimpses summoning the end of the world with a Vesuvius like nasal haemorrhage is utterly ridiculous. It becomes a gag rather than titillation for the viewer. It’s got the bizarre sensibilities of World Conquest Zvezda Plot, but it betters that show as it doesn’t overreach, trying to do too much in its runtime. Punch Line uses its episodes efficiently to tell the story it aims to, and doesn’t waste effort on random diversions. You may have to be in a bit of an odd mood to best appreciate it, but Punch Line is worth a watch or three.