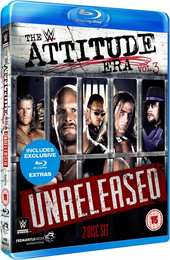 Now, at Volume 3 you could argue this really is scraping the barrel and as with a lot of the 'Volume' collections, I do wish they would have done a chronological look at the Era rather than the third hodgepodge selection of matches of which this feels both the best and weakest. The best, because a lot of these matches are not ones that I have seen ad-nausea for the past twenty years and the weakest, because a lot of these matches are not matches we have watched for years for a reason.

One of the things I will say is that if you are a fan of the Era then there will literally be someone for you here, whether it is Bret Hart, Stone Cold, Mankind, Undertaker, Shawn Michaels, The Rock, Owen Hart, Hardy Boyz, Triple H, The Ultimate Warrior, Legion of Doom... actually wait... this set contains The Ultimate Warrior and the Legion of Doom? Right, that's me sold. It seems everyone and anyone who wrestled during that time is featured.

Of the thirty matches none are unwatchable and that is a good thing, however very few are that memorable and again I think this both works in the sets favour and disfavour. As interesting as it is to see The Ultimate Warrior against Owen Hart, this is not a match that anyone would want to remember and certainly not a great match by either. A lot of the rare matches or matches that were non-televised are probably that way for a reason.

Highlights include an amazing match between Stone Cold Steve Austin and Bret “Hit Man” Hart from Germany and which along with his later match against Shawn Michaels really showed that Austin was more than just the brawler with the stunner that he became later on.

There is a great Triple Threat (and probably one of the first of this type of match outside of Indy and ECW between Shawn Michaels, Bret “Hit Man” Hart and Sycho Sid. It's surprising that this was never used as a PPV main event at some point.
It's not surprising that Triple H gets a good showing on this set, but it can never be denied that he doesn't put on a great match.

What is surprising is the lack of The Rock from this set. He only features in three matches and though both are fine in general I would have expected a bit more from one of the main figures of the era. Of these the only memorable one is the one pitting him and The New Age Outlaws against Stone Cold Steve Austin, Cactus Jack and Chainsaw Charlie which is a great match.

Shawn Michaels & Triple H against The Legion of Doom wasn't the best match I've ever seen, but as always any chance I get to watch The Roadwarriors I will take it and at least it isn't the 'Puke' and 'Hawk Alcoholic' days.

The Blu-Ray exclusives consist of five matches of which only two are really worth watching with another excellent match between Shawn Michaels and Mankind and another amazing Triple Threat this time between Undertaker, Bret Hart and Stone Cold. Again it is bizarre that this was never used as a main event as it quite clearly was a wonderful match.

Overall, I really enjoyed the set. Though I wish, in hindsight, they had done a chronological look at the era by era or even by superstar, this is still a set jampacked with amazing matches. If you are a fan of wrestling you will love it, if you are a fan of attitude and general outrageous behaviour then you will also love this set. However, I do think that this should be the last set and maybe they should go on to another topic.