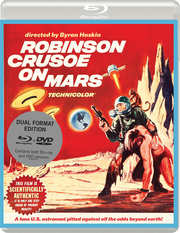 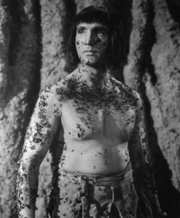 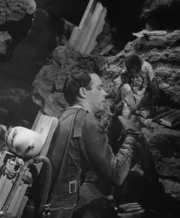 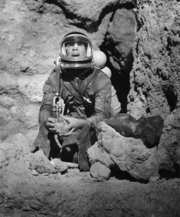 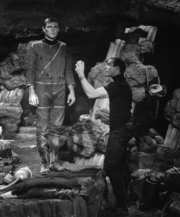 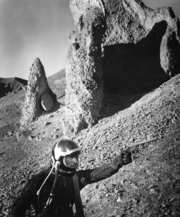 Review for Robinson Crusoe on Mars

It was the big sci-fi event movie, a film declared to be as scientifically authentic as possible, a tale of a solitary astronaut, stranded on Mars, battling against the odds to survive long enough until rescue. Of course this was 1964 not 2015, and the film I’m reviewing is Robinson Crusoe on Mars, not Ridley Scott’s The Martian, but there’s something about people fighting against extreme adversity in such situations that does appeal, and it’s turned out to be something of a perennial theme. I once reviewed another film about shipwrecked Martian astronauts called Stranded, and then there’s the classic eighties sci-fi Enemy Mine. But this time it wasn’t the genre that called me to review this film, it was nostalgia. When I was still a fledgling sci-fi fan, I used to cut my teeth on the films that were broadcast during the school summer holidays, and Robinson Crusoe on Mars was an annual fixture. 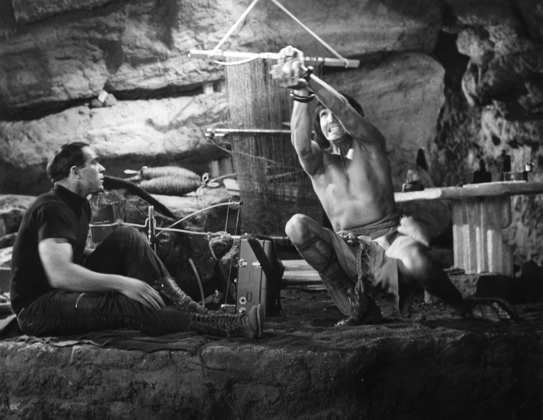 Looking at it now, this 1964 feature film hardly looks authentic and realistic, but you have to consider the state of our knowledge about Mars in 1964. NASA launched the Mariner 4 probe in that year, the first to succeed in a mission to Mars, but it didn’t reach its destination until 1965, which is when we finally learned that the surface atmospheric pressure on Mars was one-hundredth that of Earth, and that there was no magnetic field to protect against solar radiation. When this film was made, all that we knew about Mars had been discerned the old fashioned way, with astronomical observations from the Earth’s surface. The gradual refinement of that process meant that it was only in the early twentieth century that we realised that there was hardly any free oxygen in Mars’ atmosphere and neither was there water vapour, disproving the wide held belief of canals and an intelligent civilisation on Mars, but even given that, there might have been some expectation of life. So the planet that is presented to us in Robinson Crusoe on Mars is as scientifically plausible as observations suggested back in 1964, at least at first. 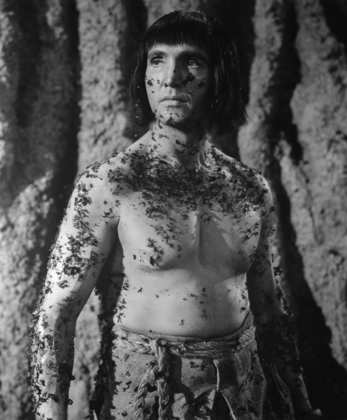 Arriving at Mars, NASA’s Mars Gravity Probe 1 two-man (and one monkey) mission seems to be a success, even if mission commander Dan McReady opts not to send the simian Mona down to the surface after seeing inimical conditions from orbit. Disaster strikes when a meteor appears on collision course, and attempts to evade it merely push their ship into a descending orbit having burned up their fuel. They have no choice but to abandon ship, and try and land in escape pods. Dan McReady is killed, but Christopher Draper and Mona survive to make it to the surface of Mars, although damage in the landing means that crucial supplies are lost. So now, Christopher Draper is the sole human on an entire planet, with only a monkey for company, and he needs shelter, oxygen, water, and food in that order or he’ll be dead within hours. But it turns out that he’s not the first visitor to Mars. 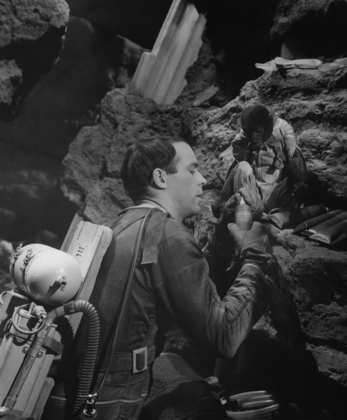 Robinson Crusoe on Mars gets a 2.35:1 widescreen 1080p transfer, and the film has come up a treat. The image appears to have had the full restoration treatment, it’s stable, free of print damage and signs of age, and the colours are lush and vivid. Detail levels are excellent for the most part, there’s a natural level of film grain, while dark and shadow detail is really well defined. The film was shot in Techniscope, that troublesome budget saving process that Leone used on his Spaghetti Westerns, and just like those films, this one excels for close up detail, while panoramic vista shots too are breathtaking. It’s in the middle distance that things get a little less defined. The film itself makes imaginative use of Death Valley locations, composited in skies, some great sets (some not so great), and some really good matte paintings to bring this Mars to life. It’s also worth noting that the colour scheme chosen for the Martian landscape is closer to what the Viking probes found in the seventies than the extreme red that movies like Total Recall insisted on using even after the fact.

The images in this review have been kindly supplied by the distributor.

I have problems with compatibility. The rare disc will show up with sound sync issues on my Panasonic home cinema, and it’s usually the classic movie discs that do so. Anyway, if you too have a Panasonic SA BTT490 Home Cinema, then adding a 60ms delay to the audio in the player set-up options will get everything synced up right for Robinson Crusoe on Mars. The audio on this disc is a PCM 2.0 English track, and I’m assuming it’s the original mono. Certainly the film remained a front and centre affair throughout. But it’s a full, clean and rich audio track, the dialogue is clear throughout, the sound design works well, and the film’s music does an effective job in evoking the emotion and isolation of the story. SDH English subtitles are provided if you need them. 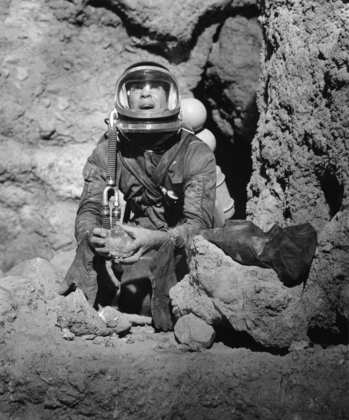 This is a Eureka Masters of Cinema release, so expect it to be dual format, and for there to be a 20-page booklet with the discs. It has an essay from Paul McCauley, stills from the film, and the original press release.

The disc boots quickly to a static menu. The only extras on the disc are a four minute long HD trailer (even in 1964 they managed to give the whole story away), and a recently recorded commentary from Robert Skotak, visual effects artist on films like Battle Beyond the Stars and Aliens, and biographer for Ib Melchior, who wrote Robinson Crusoe on Mars’ screenplay. The commentary plays more like an interview, as a moderator quizzes Skotak on his life, how he knew Melchior, and the discussion about the film proceeds from that viewpoint.

For once, I feel a little deflated at the Eureka package, as I had a quick look at specs for the US Region A locked Criterion disc, and that has a commentary from Melchior, actors Victor Lundin and Paul Mantee, production designer Al Nozaki, vintage audio with director Byron Haskin, as well as Robert Skotak. It also has a featurette, extensive image gallery and a music video.

Given what we knew in 1964, Robinson Crusoe on Mars is surprisingly scientifically plausible, to a point, after putting to one side a couple of Hollywood clichés and conventions. The spaceship does sound like a jet plane as it zooms by, and the meteor it has to avoid is on fire in the vacuum of space, but in terms of appearance and behaviour, this Mars mission unfolds like any NASA mission of the era, the professionalism of the astronauts, the way the ship manoeuvres, even the appearance of the landing craft not too far different from the Mercury and Gemini craft that were being launched and built at the time. While the astronauts don’t wear spacesuits as we recognise them, they do have apparel not too far removed from the pressure suits that the Mercury astronauts wore for their short suborbital and orbital missions. 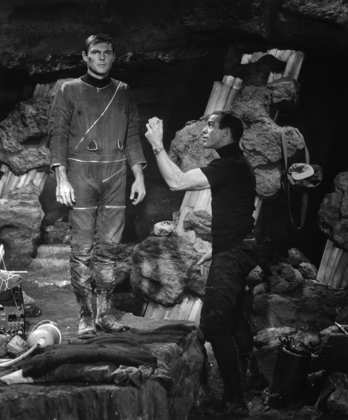 What follows when Draper is stranded on Mars could be seen as plausible back in 1964. While the oxygen content of the atmosphere was known to be minimal back then, as was the ambient water, it could have been possible that the pressure was high enough, the atmosphere non-toxic to a point where Mars could be a shirt-sleeve and oxygen mask environment. It’s with that concept in mind that the movie unfolds, with Draper having to quickly adapt to his new solitary life in an environment that could still easily kill him. The first apparent incongruity is that Mars’ surface is on fire in this film, something that seems impossible given the lack of oxygen, but that actually is a plot point in the film, and the first discovery that Draper makes on his journey to survival.

It’s pretty much a one-hander at this point, with Draper chronicling his isolation (except for Mona) on a voice recorder/communications device, and it’s entertaining and informative watching him explore his new domain, with Death Valley standing in for the barren Martian landscape, as he finds out ways to survive, sourcing first oxygen, then water, and even food. This is top notch stuff, the kind of hard sci-fi that rarely gets onto screen, and it’s a commendable film up to the point where the lights appear in the sky. 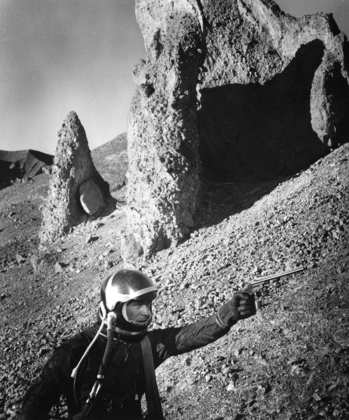 It’s here that the pulp elements of 50s and 60s sci-fi fiction enter the film, and it takes a plummet down in my estimation. Perhaps it was a desire to stay a little too faithful to the original Defoe novel, but even this Robinson Crusoe needed a Friday; although you’d think that a dusky skinned manservant requiring Western civilisation would be hard to come by on the fourth rock from the sun. Thankfully for the sake of the film, there are flying saucers, there are alien miners, and there are their alien slaves, who look suspiciously ancient Egyptian. You can really start picking nits in this idea. I mean, why bring slaves all the way from Orion’s Belt to Mars to sift through rubble, when there’s a planet full of potential slaves just one orbit in. That would save on fuel and life support, especially when you’re the sort of thrifty aliens that dispose of your slaves as soon as they are no longer of use. Indeed, why not go mining on Earth? It doesn’t bear scrutiny, or indeed common sense, which given all the hard work done in the first half of the film, trying to keep things realistic is a jarring disappointment.

If the whole film had been done in that pulp style, then Robinson Crusoe on Mars would have worked as a typical fifties and sixties b-movie sci-fi; if it had stuck with the hard sci-fi approach all the way through, it would have been one of the classics of the genre, up there with 2001, but it’s the collision of the two approaches that has left this film as a footnote in sci-fi cinema. If you can accept the fantastical turns of events in the second half of the film, Robinson Crusoe on Mars is a great boys-own adventure, just the kind of film that inspires young sci-fi fans during their school holidays. It has the imaginative exploration of a world alien to our own, survival against the odds on one’s wits and intelligence, and it has a friendship, which unlike that of the original Defoe novel is one of equals, one that develops into a brotherhood. This Blu-ray of Robinson Crusoe on Mars looks fantastic, bringing out the film’s imaginative production design, and well executed effects with great impact. The extras package might be a little disappointing, but it’s still a fun film to watch.