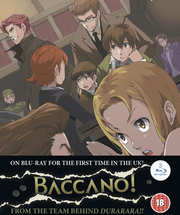 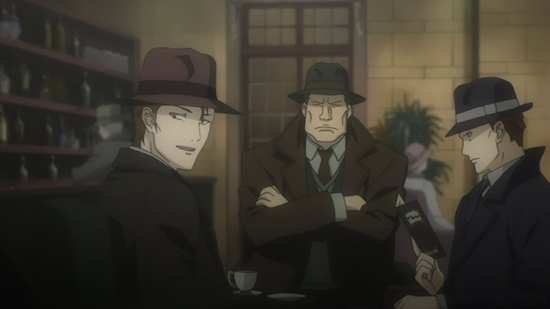 Did you ever see one of those ‘magic’ pictures that you stare at for a while and eventually a picture appears clearly from within its seemingly shapeless form? For me, watching ‘Baccano!’ was a very similar experience, although I had to get into the third episode before the picture showed itself. Up to that point I genuinely couldn’t make head or tail of it. Interweaving and surreal plots with dozens of characters left me reeling and slightly depressed. Was it me? Am I now passed being able to keep up with the stuff? If you look at the other glowing reviews of this eight-year old series on this site you’d be forgiven for thinking so. (This one for example, from in-house anime expert, Jitendar Canth, a far more reliable source than this particular anime dabbler). But I have to tell it like I see it and for a while there I thought this series was going to be a complete wash-out; over-complicated, convoluted and unfathomable. 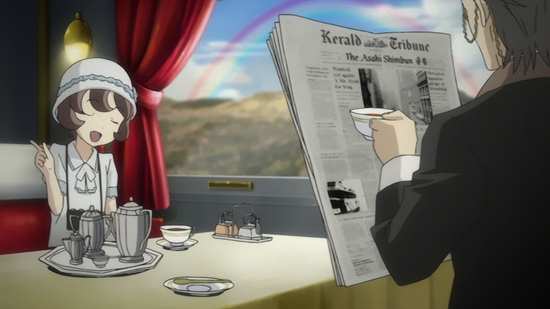 So what happened to change my mind? Well, I suppose you could say persistence paid off. By episode three I was up and running and enjoying (and following) all the interweaving plot-lines and multiple-characterisations. What emerged was a highly addictive, fun anime although it’s certainly not for the faint-hearted. The violence in it is often extreme so isn’t one for the kids. 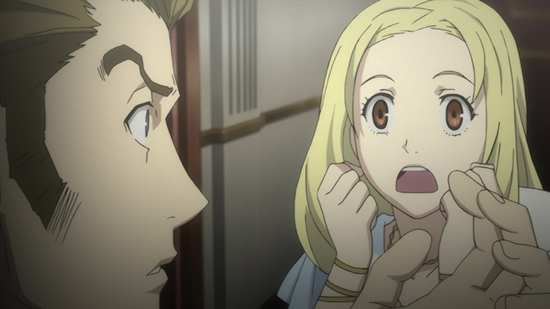 So what’s it about. Bear with me. [Long pause for breath].

Whilst I’ll have a crack at summarising these narratives, I’d refer you to Jitendar’s excellent review for the low-down on the many colourful characters which populate this world. It is they who will either confuse or delight you, depending how acceptable you find completely off-the-scale non-linear storytelling. 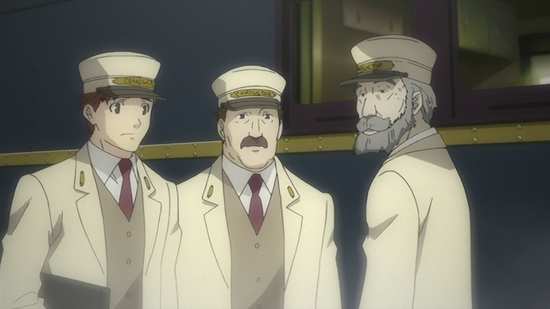 OK – here goes. Don’t shoot me. I didn’t write this series. It was based on a very popular manga. I’ll also try to avoid too many spoilers, but maybe you should look away if you intend to watch the series for yourself. Half the fun is seeing it unfold in myriad and unexpected ways.

Right. It’s a tale that is set in and around 1930’s America during the Prohibition – though it flickers back and forth on that timeline faster than Dr. Who in a faulty Tardis. It also unapologetically dips back to the 18th Century for one episode too. After being completely confused about how it fits together, it suddenly dawned on me that this didn’t really matter all that much as the characterisation is what makes the series such fun. Not just one or two interesting characters, but more than a dozen. In that regard it’s fantastic value - perhaps more strong characters than any other anime I’ve seen. 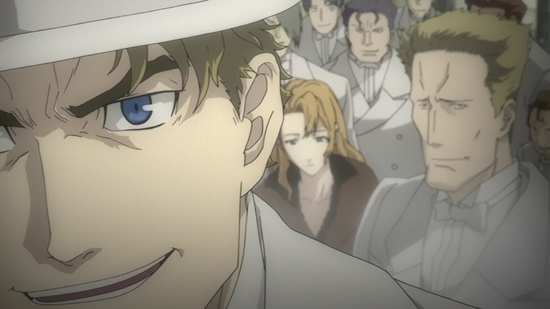 It's set during the early depression in the 1930’s and follows several groups of criminals, including thieves, gangsters and bootleggers. It also features alchemists, psychopaths and supernatural monsters. The bulk of the anime covers the weird events on the Flying Pussyfoot (a transcontinental steam train thundering across the USA on its way to New York). A hijacking (or several) goes terribly wrong and what follows are a veritable William Burroughs style cut up backwards and forwards in time, mashing up period gangster style happenings with occultism and fantasy in a way that only anime could encompass. 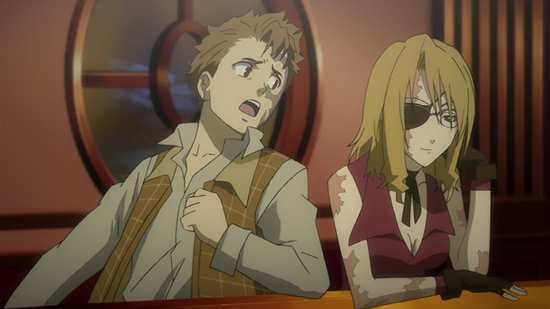 We kick off in NYC in 1930, at the height of the American Prohibition. The bearded Szilard (actually an alchemist from the 1700’s who was present when he and a group summoned a demon who gave them an elixir of immortality) manages to finally re-create the original elixir. But just as he’s in the height of his eureka moment his dwellings catch alight and he is forced to run out to the streets clutching just a few bottles. This being prohibition America, he is set upon by a group of gangster thugs, led by Dallas Geonard, who assumes it to be alcohol. 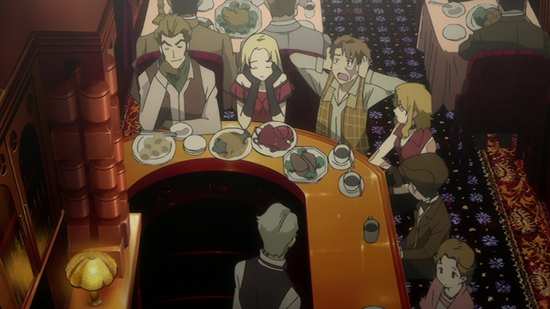 In the meantime, two foppish, top-hat and bonnet wearing thieves (Isaac Diab and Miria Harvent respectively who change outfits as often as they do their minds) enter the picture and mean to get hold of the goods, as do Firo Prochainezo and the Camorra family, the Martillo, who don’t really know what it is they’re chasing but assume it must be something valuable. Before long, a whole bunch have taken a sample of the elixir.

In 1931 we see the Gandor mob fight the Runorata family in a turf war when a new drug arises. Luck Gandor asks his adoptive brother Claire Stanfield, a legendary assassin, to help him sort the situation and Claire jumps aboard the Flying Pussyfoot as the conductor. But the train is hijacked by the Russo and Lemure gangs and a bloody battle rages between the two whilst the train trundles on to its destination in New York. 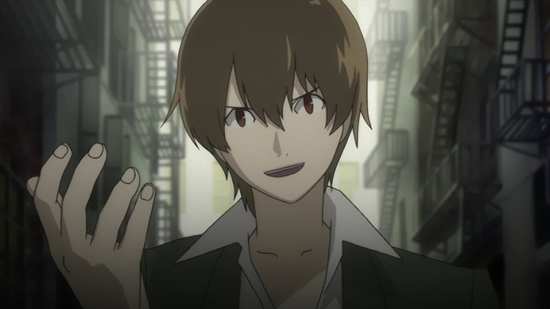 Meanwhile, Jacuzzi Splot and Nice Holystone try to protect the passengers from both gangs and Claire becomes the ‘Rail Tracer’ which is a monster that gobbles up train passengers as well as members of both gangs. At the same time, Ennis (the new identity of the old guy who took the elixir back in the day) writes to Isaac and Miria, inviting them to New York.

The train eventually arrives with the survivors going their separate ways: Jacuzzi and Nice escape and go into hiding; Rachel returns to the Daily Days newspaper (where all information can be bought and sold for a price) and Isaac and Miria introduce young Czes to the Martillo family who adopt him as one of their own. Psychopath Ladd and his subservient female side-kick survive but are later imprisoned for the slaughter aboard the train. Boy, he’s one evil fella! 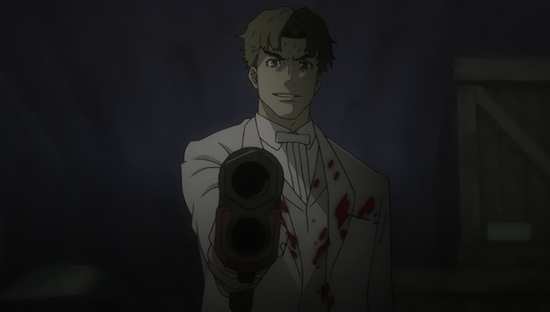 Claire begins his mission to exterminate the enemies of his adoptive brothers, as well as to find Chane and marry her. And so it goes on, even flitting back to the 1700’s for an entire episode to go back to the origins of the immortals. The whole thing is filled with violence, madness and wonder – a thick stream of creative consciousness and, regardless of whether it leaves your head spinning or not, there is absolutely never a dull moment.

The set comes with the original 13 episodes of the TV series as well as 3 OVA’s which are an interesting addition, tying up some loose ends and introducing yet another character into the cast of thousands.

One gripe I had with the series, and not unrelated to the sheer mass of characters featured, was the overly extended intro which ran for over 3 minutes at the start of each and every 25 minute episode, eating into valuable airtime.

As I tend to do, I selected the US dub which would seem a natural choice for a series set in 1930’s New York and Chicago. It was generally first class but dialogue was occasionally mumbled and hidden behind music or sound effects that were just too loud for comfort. The result added to the complexity and challenge with trying to keep up with what was going on.

Image quality was fine if short of stunning. This was a series created for SD and its soft and muted tones look absolutely fine but clearly not as crisp as more recently (and digitally) mastered high definition series.

Overall, there is no doubt that Baccano! is stand-out anime and this UK released Blu-Ray is the way to watch it, especially as it includes the three straight to disc OVA’s as well as the original thirteen episodes. However, in my humble opinion it’s not worthy of a 10 out of 10 rating. It’s too violent for some tastes (including mine) and its myriad casting and narrative are a tad difficult to follow. But then I’ve only watched the series once. Now I know more I daresay I would enjoy watching it more a second time and it’s certainly good enough to justify that. It also has more fun characters per square inch than any anime I’ve ever seen, both its strength and its weakness. But that’s Baccano! If it sounds like your bag it almost certainly will be.