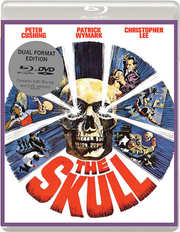 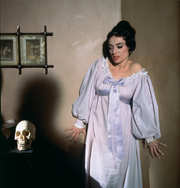 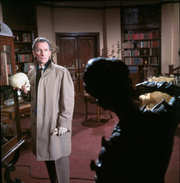 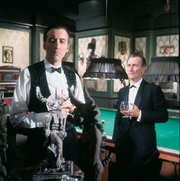 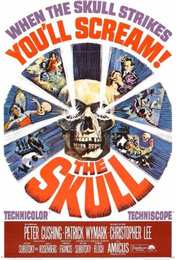 Review for The Skull 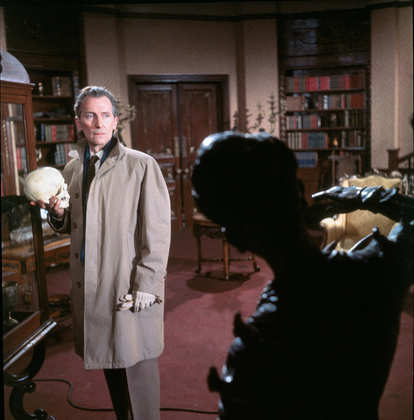 After making a number of successful ‘Hammer Horrors’ in the early sixties, Director and Academy Award winning cinematographer Freddie Francis (Paranoiac, Tales From the Crypt, Dr. Terror’s House of Horrors) moved to the fledgling Amicus Productions and produced an incredible run of horror titles that would make them the only studio able to rival the ascendant Hammer Pictures during the peak years of British horror filmmaking. ‘The Skull’ must surely rank among its very best.

Peter Cushing stars as Dr. Christopher Maitland, a writer and collector of occult items (with a preference for those with a somewhat macabre history), who is offered the chance to purchase a highly expensive and unusual item – the skull of the Marquis de Sade. Warned against obtaining the item by fellow collector (Christopher Lee in a rare non-villainous role), the skull’s influence draws Maitland in despite himself, bringing death and destruction in its wake.

Adapted from a short story by Robert Bloch (Psycho) and featuring an impressive score by avant-garde composer Elisabeth Lutyens, ‘The Skull’ is a great example of top-notch British horror. Despite some hokey effects by today’ standards (not helped by the brilliant image quality of this HD edition where wires can clearly be seen as the skull floats about the room), it’s an enjoyable and creepy watch, perfect for Halloween viewing. 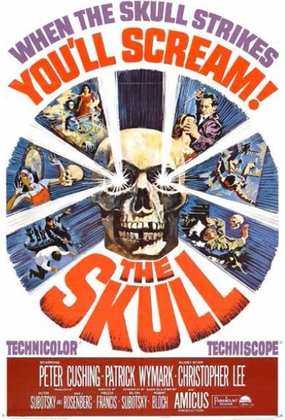 Set in an early-19th century, the film starts with a spooky graveyard scene where two grave robbers set about their business, unearthing a body part for what is undoubtedly a ‘doctor’ in well-worn Hammer film tradition. This proves to be something of a red herring. The body parts are not for medical experiments but rather to sell to ghoulish collectors. That would be because the grave is that of none other than the Marquis De Sade.

It’s not long before we realise that all has not been well for various owners of the skull over the years, most of whom have endured a sticky end as a result. It’s clearly still possessed by the evil spirit of De Sade who still demands torture and murder to satisfy its evil desires. 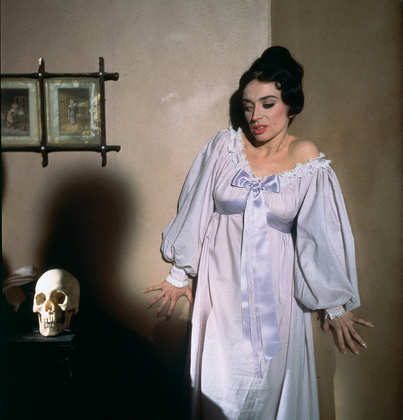 Cushing is brilliantly cast as Dr. Christopher Maitland, an occult researcher and collector who comes into possession of the skull through a supplier of old books and magical paraphernalia, Marco (Patrick Wymark). He is quite unable to resist Marco’s offer of the skull following the purchase of a De Sade book, which we understand is in his own pen and which is covered in ‘human skin’.

He’s warned off buying the skull by its previous owner, Sir Matthew Phillips (Christopher Lee) who is another collector and friend of Maitland, but to no avail. As a result there are some very spooky sequences as the skull takes control of Maitland’s mind, causing him to hallucinate in some memorable, almost psychedelically surreal scenes which also feature the skull in motion around a darkened room. So much achieved with so little resource in a great example of low-budget, pre-CGI special effects imagination. 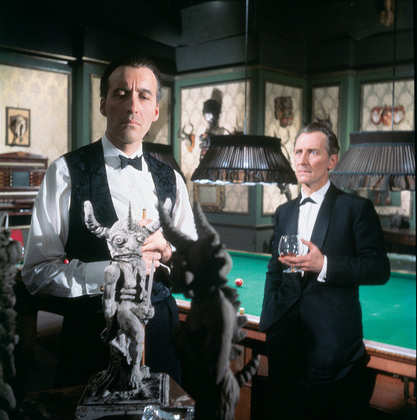 Whilst Cushing is (as usual) superb, Christopher Lee does a comfortable and convincing role in support, albeit in an atypical role. The support cast is equally good with, Patrick Wymark, Nigel Greene, Jill Bennet, Peter Woodthorpe, and Patrick Magee all turning out flawless supporting performances.

The transfer looks great and really shows off John Wilcox’s ("Legend of the 7 Golden Vampires") colourful cinematography to best advantage. Whilst clearly a budget job, ‘The Skull’ remains impressive from a visual point of view and this may well be the best you’ll ever see it. 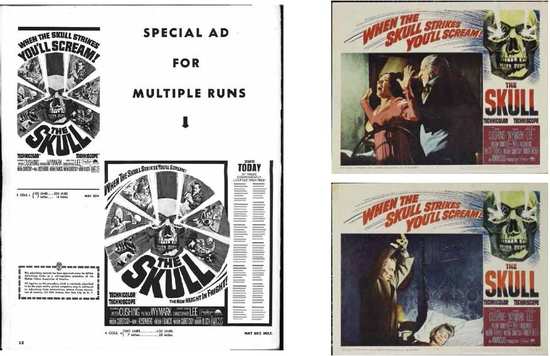 Rated X on its original release, it’s been given a 15 rating for this release; a sign of the times that something so frightening should now be deemed suitable for under 18’s. It’s strange to think that absolutely none of the publicity material (including trailers, posters or lobby art) was allowed to mention the Marquis De Sade by name. On hearing of the film, De Sade’s heirs pressed charges to prevent any such mention, particularly in France. Well, that’ something you probably didn’t know! 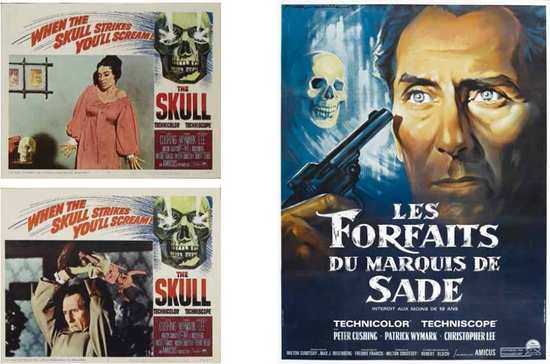 The film comes with a couple of interesting features including interviews with critic Kim Newman and film-scholar Jonathan Rigby and both are well worth watching – though only after you’ve watched the film as both contain spoilers. Their enthusiasm for ‘The Skull’ is positively infectious and their near encyclopaedic knowledge of the making of the film is highly impressive. These were presumably shot in tandem with the interviews on the recently released ‘The Man Who Could Cheat Death’ Blu-Ray as both are in the same clothes, in the exact same locations as those. 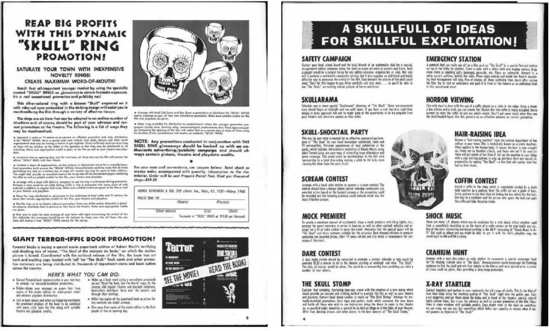 It also ships with reversible artwork, which from the pictures look impressive, as well as a booklet with some contemporary writing by Vic Pratt and a host of cinema publicity materials.

If you’re a fan of Hammer and Amicus then you’ll want to add this edition of ‘The Skull’ to your collection. It’s great fun and this particular edition is definitely the one to get.