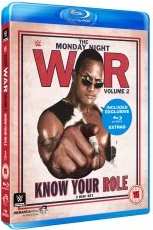 Blu-ray
Sting: Into the Light!

Review for The Monday Night War Volume 2: Know Your Role

In this second volume of the Monday Night Wars we see the conclusion of one of the most controversial and exciting times in the wrestling business. As with the previous set, which I do recommend watching first, this is a wonderful, indepth look at at time in the wrestling business when we had choice and actually could watch the best or worst at the flick of a switch.

It could be argued that this should really be dubbed 'The Fall of WCW and the Rise of WWE' as these episodes only really focus on the worst of WCW and the best of WWE. Eleven episodes focus on Monday Night Jericho, The War Goes Extreme, The War Gets Electrified, Divas Gone Wild, The War Goes Mainstream, Foundations of War, Building an Army, The Kliq, Mistakes on the Battlefield, The Fall of WCW, Life After Wartime

Throughout the we see WCW's disregard of talent like Chris Jericho, the use of stars for better and worse and also the multitude of mistakes that WCW did both with and without Eric Bischoff and Vince Russo. It is surprising that there isn't an episode focusing on both of these people in general, as they were major reasons why WWE succeeded and why WCW failed.

We also see the rise of The Rock, the Divas, and how ECW factored into the war and though more could have been made about this, it is nice that they were at least acknowledged. By the end of these two disks (four disks in total), you will have heard most, if not all of the stories about the war, what went down and why ultimately WWE succeeded and WCW died.

I have to say that I really enjoyed this series of documentaries. Like the first set, each story, each rumour, each major player in the feud was given enough time and often their own episode to really show why people like The Rock and Chris Jericho meant so much and made such a difference. It is true that over the whole series there was a much greater focus on WWE and nothing really on why they fell at the time, focusing mainly on the regroup and rise. I can understand why they wouldn't want to dwell on this, but it would have been nice to have looked more at this from an impartial point of view.

Monday Night War Vol. 2: Know Your Role is a perfect end to a look at this era. Like many documentaries, I wanted to know more and wanted to relive some of the moments that are discussed. This is the mark of a great documentary and this is one of the best the WWE have created. I do hope this is the sign of more to come.