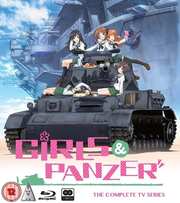 Last year, when I reviewed Girls und Panzer on DVD for this site, I paused in my reviewing to place an order for the Blu-ray version, having fallen in love with the show, and determined to watch it again in short order, to see how it would look in high definition. My initial estimate of a few weeks has turned into almost 18 months, as the discs lay mournfully in my to-watch pile, but here I am, finally watching Girls und Panzer on Blu-ray. As you would expect by now from me, this is another quickie Blu-ray double dip review, and if you want to read more about the show specifically, here’s a link to the review of the DVD. This is more a look at how the Blu-ray discs fare. 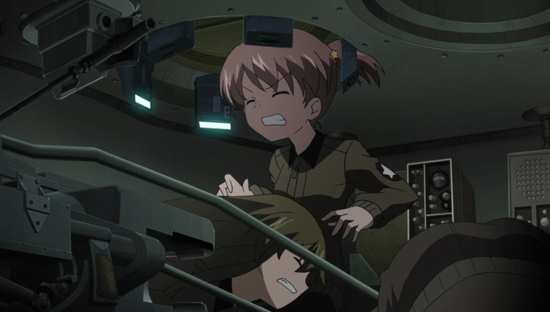 To be an elegant, well refined, and educated young girl takes education, deportment, etiquette, a knowledge of the finer things, and tanks. In the world of Girls und Panzer, young girls are expected to learn and participate in the Martial Art of Sensha-do, tankery, in which they compete in regulated tank warfare games, learning to work together as part of tank crews and battalions, in a world where girls’ schools are set aboard gargantuan aircraft carriers turned into small cities in their own right. 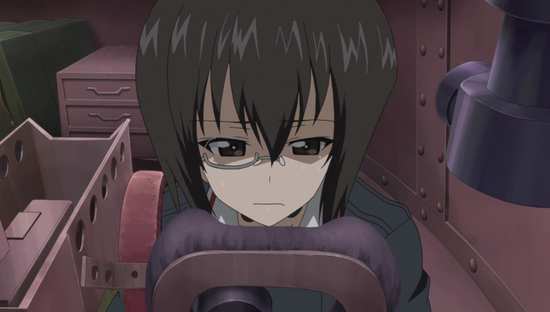 But for Miho Nishizumi, Sensha-do is the last thing that she wants in her life. She may come from a long line of Sensha-do practitioners, living in the shadow of her mother and older sister, and the illustrious Nishizumi School, but she’s chosen to leave all that behind, and has selected Ooarai Academy as her high school specifically because it doesn’t have a Sensha-do class. Too bad, because as soon as the School Council President learns that they have a Nishizumi coming to their school, she becomes intent on reviving Sensha-do in their school after several years absence from the curriculum, and she’ll even resort to blackmail to recruit Miho to the cause. But with the new friends that Miho makes at Ooarai Academy, she might just find that cute girls taking part in tank combat is a whole lot of fun! 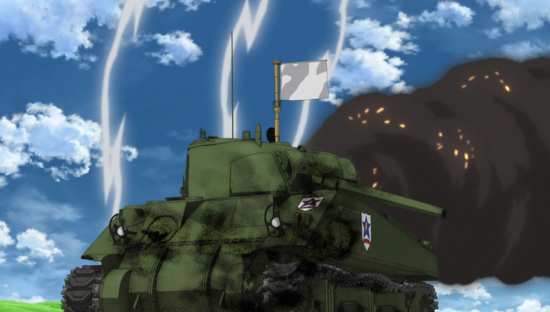 12 episodes of Girls und Panzer are presented across two discs from MVM. 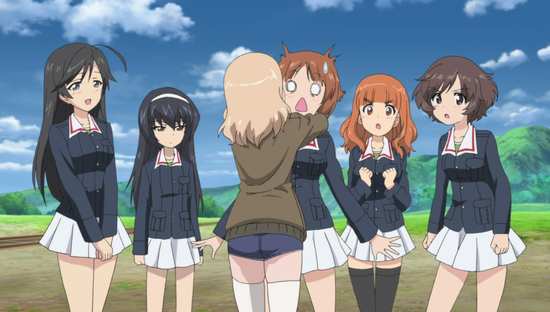 Girls und Panzer gets a 1.78:1 widescreen 1080p transfer. You can immediately see the benefit of HD on this show, as along with the bolder colour palette, the smoother progressive animation, and the distinct lack of compression artefacts around fast motion and action scenes, you also get crisper line art and visibly greater detail. Given the content with this release, it’s useful that both the discs are dual layer, although it would have been better with eight episodes on disc 1, and 4 (6 with the recaps) plus extras on disc 2. But even with this, the only nit I had to pick was a smidge of digital banding in darker scenes, and really only obvious during the Pravda battle. 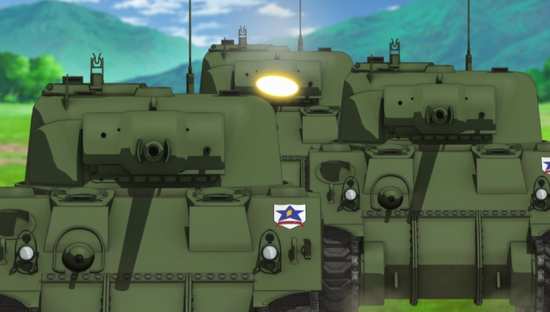 While you have the usual cute girl designs, the characters are animated well, and you get to see their different personalities. The budget goes to the tank designs, which manage to inject an air of authenticity even in this cutesy, primary colour world, and which through the use of deft CGI blended into the 2D animation really comes across well. You get all of the edge of the seat action and tank strategies brought to life in this anime. 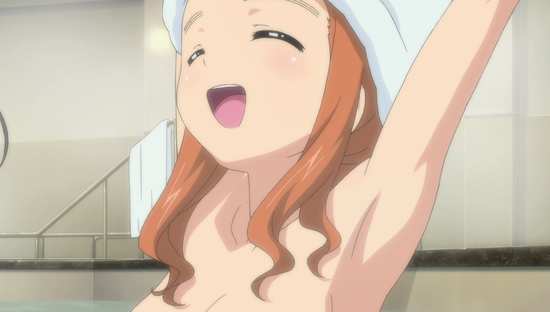 You have the choice between DTS-HD MA 2.0 Stereo English and Japanese, with optional subtitles and a signs only track, with Sentai’s signs captions designed to match the onscreen text style. You also get the odd moment of Cyrillic subtitling for the Russian dialogue, and as you would expect, the lossless treatment, especially at the correct 24fps speed and pitch is very much a step up over the DVD. The Japanese audio is definitely the way to go here, with bright and lively characterisations, with excellent voice actor performances. The music of Girls und Panzer is a key selling point, not only two very lively theme songs, but also the incidental music, which with one exception offers some classic military themes, as well as original compositions in that vein, with the music in the opening episode offering melodic references to films like The Great Escape. The action comes across astoundingly effectively, and tanks are loud! Their engines are loud, and their cannons will have you rapidly dousing the volume on your TV, hoping that the neighbours won’t sue. 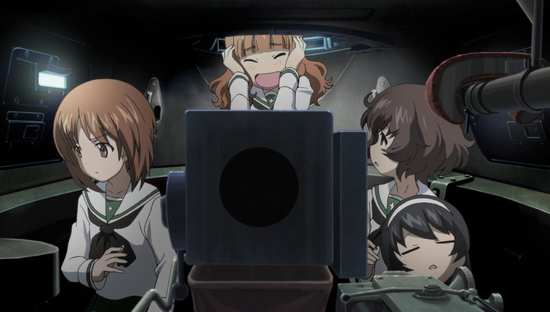 The problem with the Tetris theme replacing the original Russian folk song is still here, sad to say, and one minor issue, which I also noticed on the DVDs is that in episode 11, there are minor jumps in audio. It’s as if frames are missing (although no actual frames are missing in the animation). On one or two occasions, you might feel that a note in a musical piece doesn’t sustain long enough, or on one occasion, a character says a word too quickly. It’s a minor nit to pick, and something most people wouldn’t even notice, but when it comes to Blu-ray quality, I’m usually left picking nits. 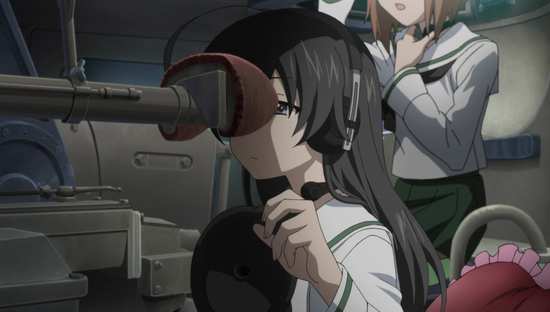 You get two Blu-ray discs held on either inner face of a Blu-ray sized Amaray case. The inner sleeve gets an episode listing and character artwork.

The discs present their content with static menus with a nice little tank cursor. Each episode is followed by a translated English credits scroll, and with the extensive cast here, it runs to over 2 minutes.

The standard for any show that goes on hiatus for a length of time is to offer a recap episode or two to get people caught up. Girls und Panzer does indeed have two recap episodes, presented in Japanese only with subtitles. There are also OVA episodes to Girls und Panzer, but MVM released them separately on Blu-ray and DVD. The extras are all on disc 2 and are arranged as follows. 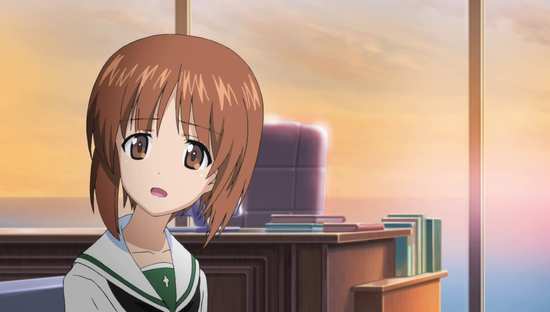 Episode 5.5: Introductions
This lasts 25 minutes, and offers a nicely put together introduction to the characters in the show, and the tanks that they pilot. The emphasis is on Miho’s crew of course, as well as the Student Council members, but in the fast paced anime, it’s easy to overlook the other tank crews on the team, and at least after this episode you’ll be able to put names to faces to the volleyball team, the history otaku, and the first years.

Episode 10.5: Introductions
Another 25 minute recap episode, which as well as filling us in on the rules for Sensha-do, also introduces the new tanks and new members of the Ooarai team, as well as some notable characters on the enemy teams. It’s funny the way they brush over the Anzio team. Unlike the DVD release, which was mastered by Hanabee, this Sentai sourced Blu-ray disc offers translated signs for the on screen text in this episode, as well as the normal subtitles. It’s worth noting that for these catch-up episodes, that the subtitles are locked. 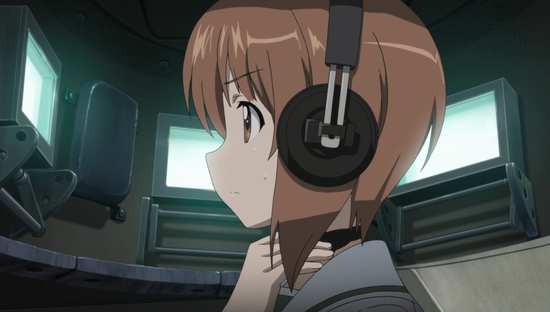 This disc also has trailers for other Sentai titles, including La storia della Arcana Famiglia, Kokoro Connect, Say “I Love You”, and BTOOOM! 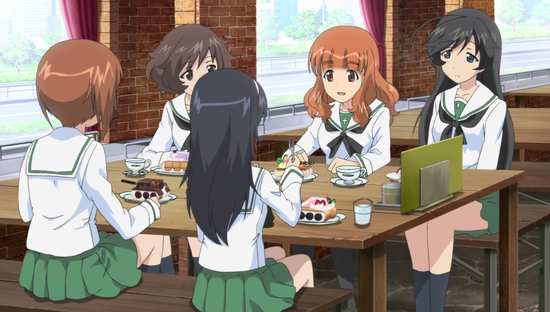 I can put Girls und Panzer on the same sparsely populated pile as K-On, in that it is pure unadulterated joy for me to watch. This is one of those shows that I always appreciate with a daft grin on my face for its run time, as it seems to hit all the right notes with me when it comes to entertainment. This second time around only re-emphasised that, with the show even more fun to watch in high definition, with lossless sound, but more importantly knowing ahead of time just how likeable the characters are, how well the show is written, and how brilliantly crafted the episodes are. You wouldn’t think that an anime could get you thinking about the tactics and strategies of tank battles, but Girls und Panzer could turn even the most uninitiated pacifist into a fan of treaded fighting vehicles. 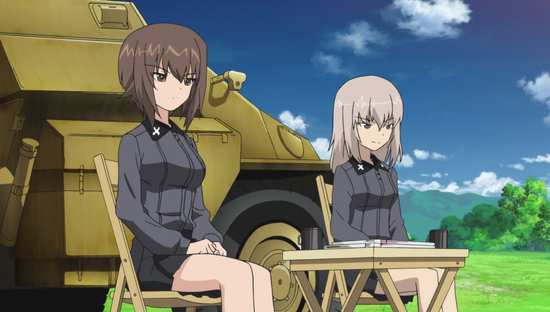 The Blu-ray really does do this show justice. The character artwork certainly benefits from the higher resolution, but the world design does so even more, while the CGI tanks still blend in perfectly with the 2D animation. There’s a whole lot of detail and deceptive nuance in the art style of the show, and having now read the first volume of the manga, I can say that for me, Girls und Panzer is one anime that transcends its source material, not least because the animators took the time to get the animation right, rather than stick with the broadcast schedule. It looks fantastic. As mentioned in my previous review, the music of the show is quite special as well, and I must be sounding like a broken record at this point, but being able to listen to the audio at the correct frame rate rather than with PAL speed-up is even more noticeable than the lossless clarity boost. With the DVD, the sticking point for me was the Tetris song replacement. That’s still the case with the Blu-ray, but this time I enjoyed the show too much for it to annoy me... well not quite as much. 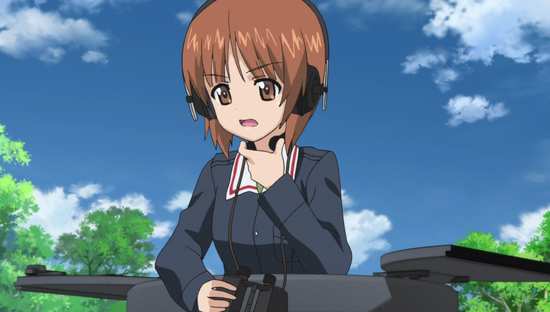 Girls und Panzer is a fantastic show, and if you’ve missed out on it this far, you really should remedy that. At the recent MCM Comicon, MVM stated that this turned out to be a surprise hit for them after turning it down three times. I really do hope it’s enough of a hit for them to get the Anzio Battle OVA and the Girls und Panzer feature film, if and when they become available in English-speaking territories. One series plus an OVA disc really just isn’t enough of this great premise.