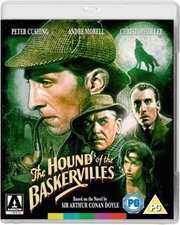 The Hound of the Baskervilles (Blu-ray Details)

DVD
Sherlock Holmes - And The Leading Lady/Incident At Victoria Falls

DVD
Hound Of The Baskervilles, The (UK)

Review for The Hound of the Baskervilles 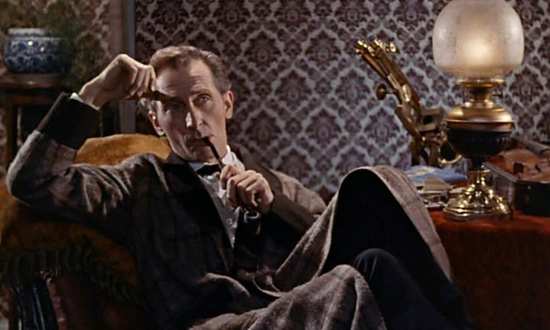 What a treat! Three of my favourite things in one. Firstly, one of Hammer’s less well remembered film’s from its late 50’s heyday. Secondly, a high definition transfer put out by Arrow, which generally means it’ll be a top-notch release, packed with extra features. I’m happy to say that it’s exactly that. Thirdly, a Sherlock Holmes story and there’s little I enjoy more than that.

Terence Fisher directed ‘The Hound of the Baskervilles’ was originally released to some critical acclaim in 1959, following the considerable success of his Universal Horror re-boots for Hammer, ‘Dracula’ and ‘The Revenge of Frankenstein’ just a year before. By this time, Hammer was in its gothic horror stride having released four or five examples, including Fisher’s. Indeed, ‘Baskervilles’ was released in the same year as Hammer’s ‘The Mummy’ which helped seal the ‘horror’ stamp into Hammer’s history. 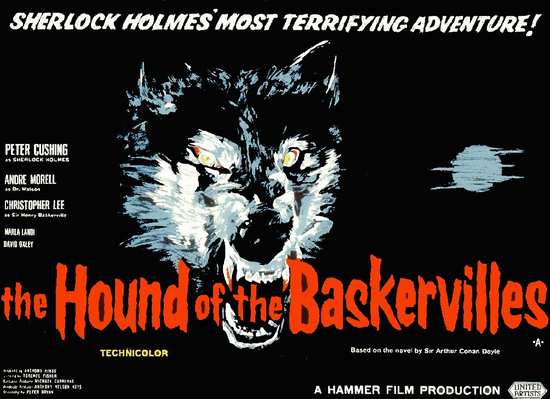 Although it’s not a faithful rendition of Arthur Conan Doyle’s tale, it nonetheless was well received as possibly the first film to put Holmes into his original Victorian setting rather than a contemporary one, like the Basil Rathbone series from the late 30’s and 40’s.

The pairing of Peter Cushing and Christopher Lee, whilst an obvious one for Hammer, works tremendously well. Cushing is a convincing, if slightly twitchy Holmes and Lee makes a convincing Sir Henry Baskerville, albeit unusual to see him as a brooding, romantic lead. Andre Morrell ably assists Cushing as his Watson and does a fantastic job, which is just as well as he has arguably more screen-time than Holmes. Playing it straight rather than the (joyous) bungling comedic approach of Nigel Bruce, it’s a highly believable portrayal, probably much closer to Doyle’s original intent.

Despite Holmes being the most filmed character of all time (including many silent films, stage plays and talkies before the definitive Rathbone version) it had been some time since a big-screen adaptation had been produced. Hammer’s foray into the gothic genre meant that such a popular tale was irresistible. Perhaps harder to understand is why it was felt necessary to alter its plot although that’s another matter. 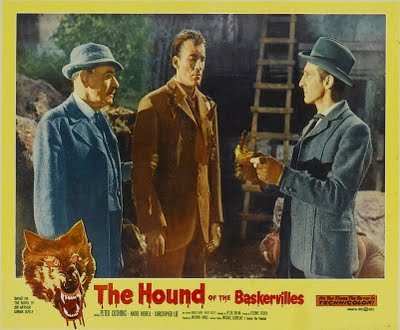 The film’s opening, whilst not a substantial part of the original tale is easier to understand. With the over-privileged landed toffs, still in hunting regalia taking sport in humiliating a servant and attempting a mass ravaging of his daughter, culminating in an almost sacrificial murder, was pure Hammer, albeit something of a red-herring here. What’s harder to understand is why it was felt necessary to alter the tale's ending – which I’m not about to reveal here. Having said that, it’s a perfectly good ending, just somewhat different than Doyle’s.

Putting that aside, the film remains, arguably, one of the very best Holmes films of all time, massively better than Christopher Lee’s later attempt at the Holmes role himself in two 1980’s TV mini-series (financed by Berlusconi) which were without doubt the worst Holmes portrayal this reviewer has ever seen, perhaps with the exception of the recent movie abominations with Robert Downey Jr. But I’m going off on a dozen tangents – so easy when discussing Holmes. Let’s get back to this one.

Rising up out of the swirling mists of Dartmoor, Baskerville Hall stands tall and gloomy. Its occupant, Charles Baskerville, has been found dead in mysterious circumstances. Could Sir Charles have been the victim of the so-called “Baskerville Curse”, which tells of a deadly beast that stalks the surrounding countryside? Unperturbed by the legend, next-in-line Sir Henry Baskerville sets out to Dartmoor to assume inheritance of the family estate, under the auspices of the famous detective Sherlock Holmes and right-hand man Dr. Watson. 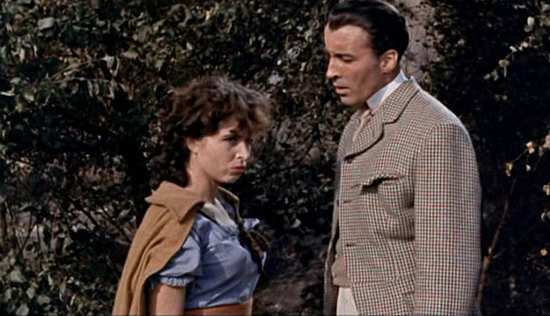 Holmes believes that Sir Henry will be the next victim of whoever killed Sir Hugo though he is highly sceptical about the legend of a killer hound. He arranges to meet Sir Henry and suggests that Dr. Watson, his sidekick, should travel to Baskerville hall to keep an eye on Sir Henry, who in common with Sir Hugo, has a weak heart.

We soon learn that a mad convict has escaped from Dartmoor prison and is roaming the moors – just another piece of an ever more complex puzzle for Holmes and Watson to consider.

Humorous relief is ably provided by ‘scene-stealing’ (Lee’s words, not mine) Ealing stalwart Miles Malleson as a bumbling bishop (you’d recognise him from his many screen appearances, most notably ‘The Man in the White Suit’ and ‘Kind Hearts and Coronets’.)

Cue lots of creaking and howling, ferocious storms and screams from across the darkened moor as well as all the usual fun of trying to pick up the clues as quickly as Holmes. If you don’t know the story then this will be a lot of fun. Even if you do, it’s still a blast.

Despite being full of bloody violence and horror, the film failed to get the much hoped for ‘X’ rating which had been generally attributed to Hammer horrors. Other than the fact this is a Holmes movie rather than a Dracula or Frankenstein film, it’s difficult to see the logic in this even today.
The transfer looks great and does some justice to the wonderfully dressed sets, the detailed props furnishings and costumes. The detail is crisp and there is very little print damage, perhaps as the result of a clean-up and restoration. It’s certainly worth an upgrade from the previously issued non-Arrow DVD.

The disc ships with so many extras that it’s quite hard to believe that they all fit on to a single disc. They’re a lot of fun and well worth the price of the disc on their own.

The audio commentary is superb and massively informative. Featuring Hammer experts Marcus Hearn and Jonathan Rigby, it’s packed with detail and context that will make you want to watch the film all over again.
You can view the film with an isolated music and effects channel (M & E) to really get to grips with the impressively staccato orchestral score from James Bernard, who also scored Fisher’s ‘Dracula’. 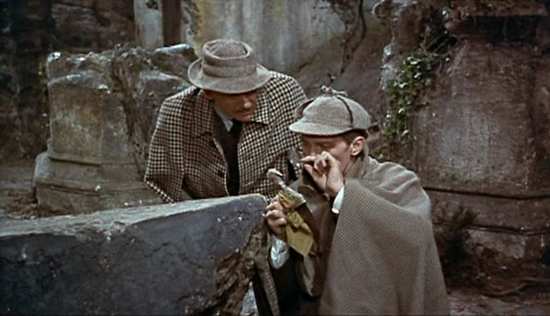 There’s a brand-new featurette produced for the release called ‘Release the Hound!’ which looks at the origins of the film; why and how it was made and which features highly informative and enthusiastic interviews with Kim Newman (who seems to know everything about everything when it comes to horror movies) and co-creator of the BBC Sherlock series, Mark Gattis, a self-confessed Hammer obsessive.

There are some excellent (previously released) documentaries on the disc too, showing Arrow’s dedication to tracking down relevant content and licencing it for their releases, making them some of the finest in the world.
First up is André Morell: Best of British, which looks back at the career of the late great actor and which features interviews with his son as well as film historians. It does focus on his Watson and gives some insight in to why he played it the way he did.

Next up is a fun but very dated looking documentary feature, The Many Faces of Sherlock Holmes which traces the many versions of Holmes that have graced screens and stages over the years. It’s narrated and presented by Christopher Lee who is fairly wooden and terribly formal.

Then there’s a nice interview with Lee, probably from the early 2000’s to go on to the DVD release at that time, and he reflects on the precise approach that Fisher took to film-making and on the masterful approach of his dearest friend, the much-missed Peter Cushing.

Also included are Lee reading, excerpts from The Hounds of the Baskervilles, the original theatrical trailer, an image gallery, a reversible sleeve and a lovely little booklet featuring new writing on the film by former Hammer archivist Robert J.E. Simpson, illustrated with original archive stills and posters.

Phew! It’s a good two nights of non-stop entertainment. A great film, a brilliant transfer and delivered with a fantastic array of extras. What more could you ask for?