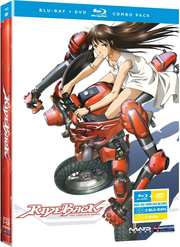 There are some unfortunate mental triggers in this world. I just take a look at this collection, actually think about the title, and it sets off an earworm in my head from the 1980s, Sinitta’s “Right Back Where We Started From”. That’s not a pleasant connection to make, especially when RideBack the anime series is one of my favourite shows, so good that it was on my list to upgrade to Blu-ray regardless of quality. The show comes from 2009, licensed and released by Funimation in 2011. Back then, you could safely import a US anime Blu-ray, and 9 out of 10 would work on a Region B machine. Actually this particular combo release from Funimation is coded Region AB for Blu-ray, and Regions 1, 2, and 4 for DVD. And it’s from that brief period early in Funimation’s Blu-ray development when the Blu-ray discs were considered a bonus for a majority DVD owning fanbase. These discs are packaged in a DVD sized Amaray. Manga Entertainment released RideBack as a DVD only title towards the end of that year. 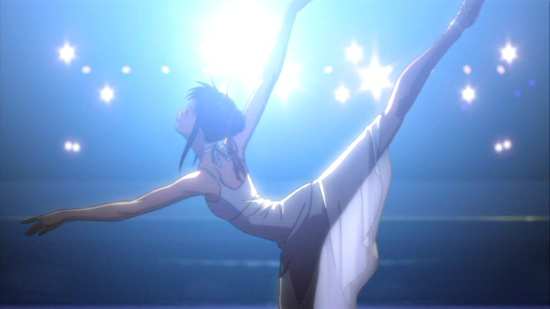 It’s the year 2025, and the GGP organisation has taken over the world. Superior technological ability has given them the edge over the traditional nation states, and most nations decide to cooperate with their benign oversight. It doesn’t make much difference to the average citizen though, whose lives are pretty much unchanged. Rin Ogata certainly wasn’t expecting her world to change again, after losing her mother in the Great Earthquake, but she was intent on matching and surpassing her mother’s ability as a ballet dancer. Her world changed again when a serious injury forced her to quit, and an average life of a college student beckoned. 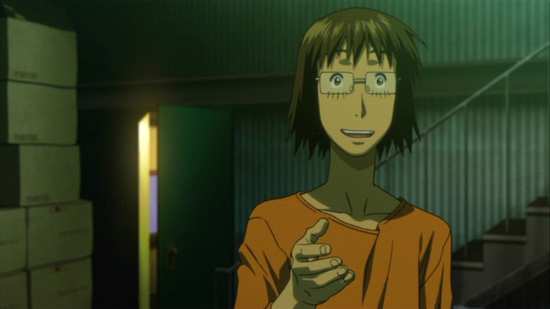 Then one day she wandered into the garage occupied by the college’s RideBack club. RideBacks are a spin-off of that new technology, cybernetically enhanced robotic motorcycles, with stabilising arms, and the ability to transform into humanoid skating machines. A rider that can learn to control and master the vehicles can make them do fantastic things. That first day, Rin Ogata learns that she can make the club’s Fuego model RideBack dance, and that she is an instinctive natural at riding them. But the GGP is keeping an eye out for individuals that stand out from the pack, especially with their proprietary technology, all the more so in a world where their rule isn’t absolute, and terrorist groups exist to upset the status quo.

Funimation present the twelve episode RideBack series across 2 Blu-ray discs. You also get the series on two DVD discs in this combo collection. This is more a look at the quality of the Blu-ray release, if you want to know more about the story, here’s my review of Manga’s DVD release. 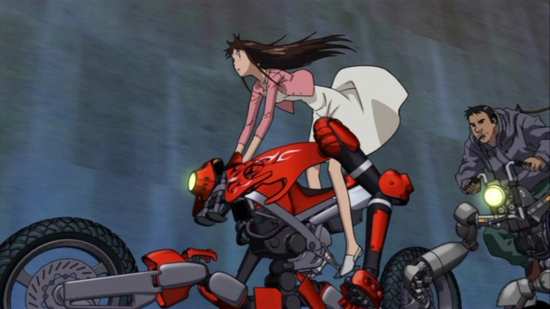 01. The Crimson Iron Horse
02. Challenge From Tamayo!? S.L.F. Spread Legs Form
03. And There’s The Flag
04. A Close Call For Shoko
05. The Mysterious RideBack Girl
06. The Lightning-Fast RideBack
07. Crime and Punishment
08. Get Ride! The Chosen One 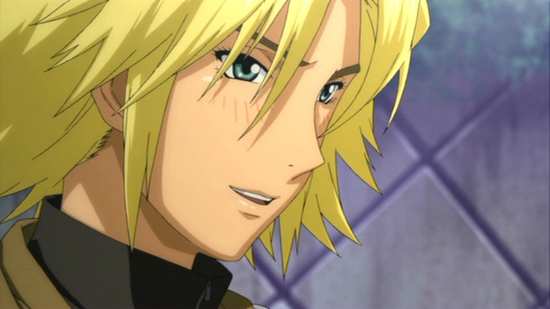 RideBack gets a 1.78:1 widescreen transfer at 1080p resolution, and it’s not too bad. The High Definition transfer certainly brings out the detail, the quality of the line art, and the rich colour palette of the show. However, it shows itself up as an early anime Blu-ray with the degree of the digital banding on show, which is to DVD levels, and can be distracting at times. It’s also a show where while the backgrounds and the mecha designs may register as sourced from high definition, the character artwork looks softer, and scaled-up in comparison. The character designs are pretty generic for anime, although individual and quirky enough to stick in the mind. Where RideBack excels is in the actual animation itself, which is vibrant, fluid, detailed and energetic. It’s the action that really impresses, and while the opening ballet performance is a taster of the effort put into the show, the actual RideBack action sequences are adrenaline fuelled and gripping. However, in HD, the seams between traditional 2D and 3D CGI animation are obvious in a way that it never was on DVD. But the show’s direction is sublime, with wonderful use of light and dark, mood and atmosphere, action balanced with reflection. RideBack still looks stunning.

The images used in this review are sourced from the DVD discs in this combo release. 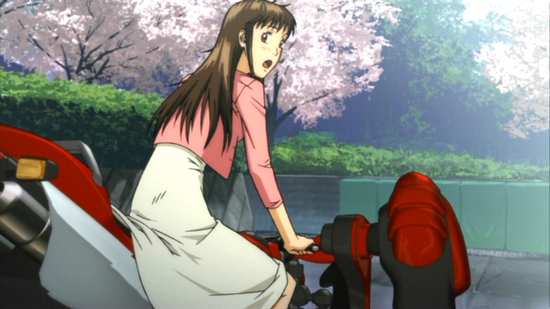 RideBack gets the Dolby TrueHD 5.1 English and Dolby TrueHD 2.0 Japanese tracks that Funimation usually give their Blu-rays, with translated English subtitles and a signs only track. Lossless audio is always a good thing, and the clarity and definition is certainly appreciated here, but as usual the most noticeable change is that the audio is at the right pace and pitch. The first thing I noticed about the RideBack Blu-rays was that the exceptional opening theme from Mell felt oddly slow, which is indicative of how often I have seen Manga’s PAL sped-up DVDs. It’s also an indication of the quality of the show’s music, strong and powerful at times, subtle and emotive at others. I went with the original language track, and the stereo set off the show well, giving it a nice bit of space and dynamism to the action. Of course that gains extra dimension with the English dub, delivered as it is in 5.1 flavour. It helps too that the dub is one of the good ones, well cast and performed with a passion for the source material. One problem with these early Funimation Blu-rays is the subtitle font, thin and white, and apt to be obscured against busier backgrounds. I did have to skip back and pause on a couple of occasions to make out some exceptionally illegible subtitle captions. 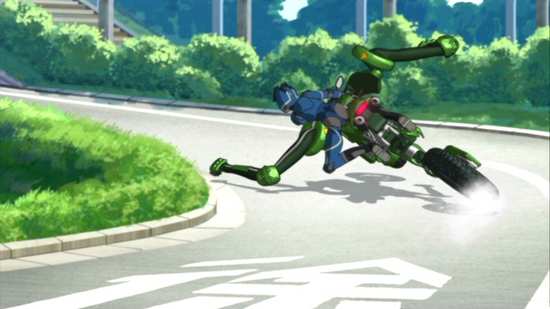 RideBack’s four discs, two DVD and two Blu are packaged in a DVD sized Amaray, held on two central hinged panels, one disc either side. The case also gets a card o-Ring cover which repeats the case artwork and blurb. The inside sleeve offers more character art and an episode listing.

Disc 1 simply has a commentary for episode 4, with ADR director Terri Doty in the booth with Kristi Bingham (Shoko), and Tia Ballard (Rin). It’s a fairly average Funimation commentary, one part useful, one part giggles, and one part mutual backslapping. Be warned that there are substantial spoilers for the series here; so don’t listen to the commentary until after you’ve watched the story in its entirety. 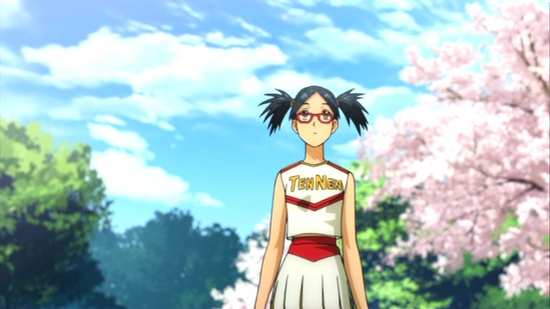 Disc 2 has the textless credit sequences.

It also has an audio commentary on episode 10, where this time ADR director Terri Doty joins Micah Solusod (Haruki) and Trina Nishimura (Suzuri) in the audio booth. It starts off as the usual Funimation gigglefest with mutual backslapping, but as the episode progresses becomes a little more sombre in tone.

You also get further Funimation trailers on this disc for TO, Evangelion 2.22, Soul Eater, Full Metal Alchemist: Brotherhood, and Eden of the East in HD, and Trigun, Noir and Last Exile in SD.

The DVDs get static menus and jacket pictures, holds six episodes per disc, but otherwise repeats the extra features. The audio options are DD 5.1 English and 2.0 Japanese with English subs and signs, while the image is 1.78:1 anamorphic NTSC widescreen, encoded progressively for those with compatible equipment. 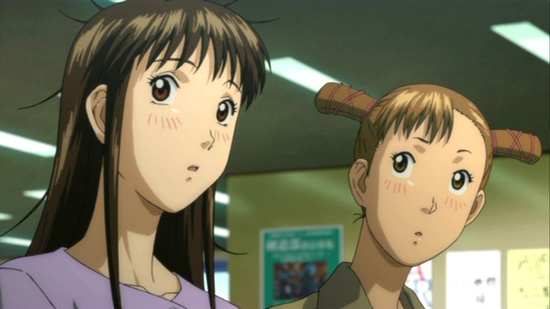 For the first time, I have a bit of a challenge recommending a Blu-ray double dip. Not that you won’t see the difference when you place these discs into your player. The difference between the Blu-rays and the Funimation DVDs in this collection is obvious. But the difference between these Blu-rays and Manga/Madman’s DVDs is less so, as when Madman authored the PAL discs, they did so from the HD source, making sure that every line of the 576i format was used. There’s not a lot of difference in the character art, it’s the backgrounds and the CGI that shows the greatest improvement in HD. True, there’s less in the way of visible compression in HD, but the amount of digital banding apparent is excessive for a Blu-ray. 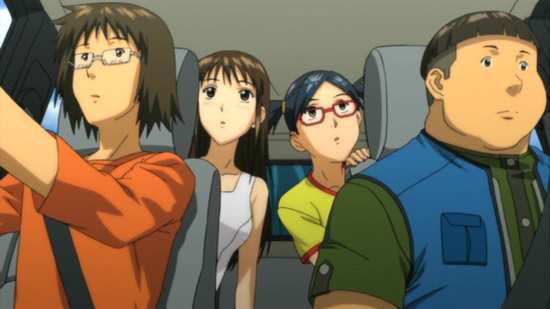 The real improvement is in the audio, with the upgrade to lossless formats certainly audible, and having it at the correct frame rate means no speed-up and no pitch correction, but the Blu-ray’s subtitling is lacking, a thin white font with imperceptible black outlines that is difficult, if not impossible to read against busy backgrounds. Funimation’s Blu-rays would get better, but this early effort clearly shows that they had some way to go back in 2011. I’m certainly happy having upgraded it to Blu-ray, the animation looks great on a big screen TV at close to native resolution, but I’m left with a couple of what-ifs that I don’t usually get when I double dip. 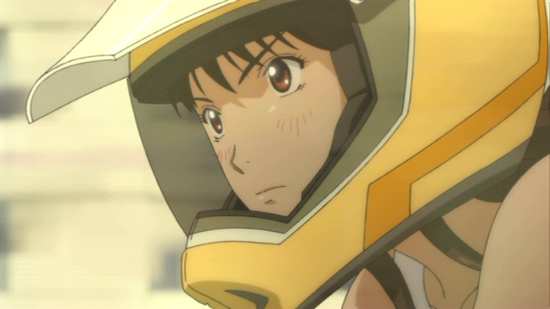 The show still transcends such petty matters though. RideBack is a fantastic, imaginative, and thought-provoking show, a rare anime that devotes itself to storytelling and character first and foremost, eschewing cliché and stereotypes. It’s very much a politically relevant show, but it’s emotionally weighted as well. You care about these characters and what they go through. And then there is the RideBack concept itself, and the more I see one, the more I wish that someone would invent it. It’s the anime equivalent of Back to the Future’s hoverboard, a mode of transportation that looks like such fun. Surely someone’s tried crossing a Harley-Davidson with a Segway by now! As I mentioned, click over to my review of Manga’s DVD release to read more about the story. As for the show, I’d think twice if you already have the DVD, but if not, go straight for this Blu-ray. Region AB Blu-rays aren’t that rare, but you’ll be able to play the Region 1, 2 & 4 DVDs in the UK too, if those HD subtitles cause a little too much eyestrain.