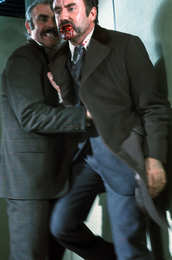 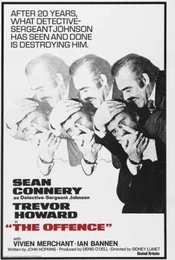 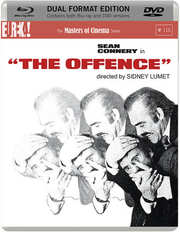 Synopsis:
“After 20 years, what Detective-Sergeant Johnson has seen and done is destroying him.” — In their third screen collaboration, the iconic Sean Connery and director Sidney Lumet (Serpico, Dog Day Afternoon) plumb the depths of what is perhaps their most psychologically complex creation: a member of the British Police Force who has perhaps witnessed one horror too many.

Two decades into a career marked by fraught investigations into murders and sex crimes, Detective-Sergeant Johnson (Connery) loses all composure whilst conducting an interrogation with a suspected rapist, assaulting him and, subsequently, beating him to death. The lead-up to this moment is charted across the course of the film in a careful flashback structure... and the lines between guilt and innocence, protector and sadist, become ineradicably blurred.

Released only one year before the director's Serpico and almost a decade before Prince of the City, The Offence offers an early Lumetian investigation into the psyche of a policeman under duress, and the potential for corruption within a high-stakes profession. The Masters of Cinema Series is proud to present The Offence for the first time on Blu-ray in the UK in a special Dual Format edition.

· 36-PAGE BOOKLET featuring a new essay on the film by critic Mike Sutton, a vintage interview about the film with Sidney Lumet, and rare archival imagery