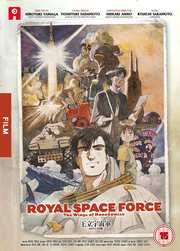 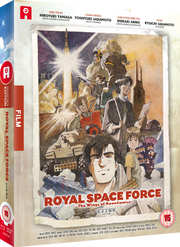 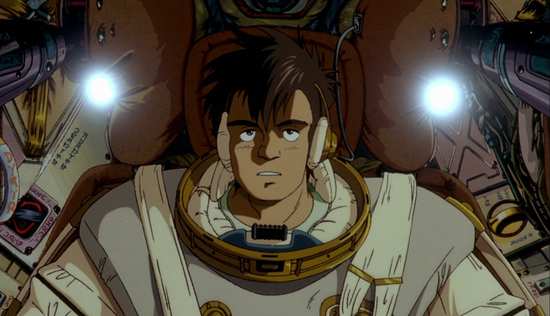 How can anyone say that they don’t like anime? It’s as ridiculous as saying you don’t like films. Anime is as broad a brush if not arguably an even broader one, encompassing as it does so many sub-genres and imaginative flights of fancy. Of course it has its own set of traditions and repetitious clichés but so do many films. What’s really great for a fair-weather anime cherry-picker like me is that I can rely on the recommendations of this site’s Mr. Anime, Jitendar Canth to point me firmly in the direction of only the very best. ‘Royal Space Force – The Wings of Honneamise’ sits firmly in that camp. 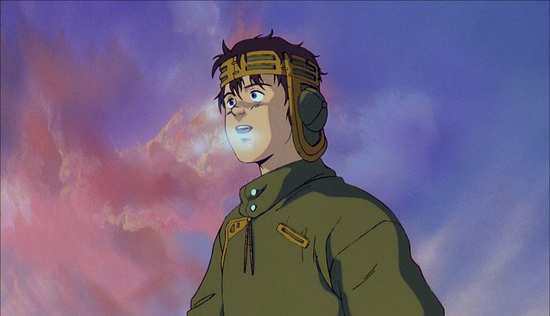 So serious hard-core anime fans will want to check out Jitendar’s review of a previously released Blu-Ray edition which looks to be similar in spec and quality to this edition. But if you’re an occasional dabbler like me then you may be interested to read on for a frank review of a first time watch of this impressive slice of classic anime. 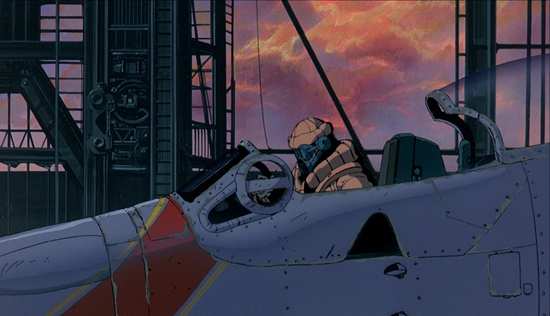 Made in 1987, but looking really superbly crisp and fresh on this Blu-Ray release, it’s a contemporary of some classic anime features from what, on reflection, could be considered something of a golden age for anime features. ‘Akira’ was released a year later than this to great international acclaim, bringing to life a classic and lengthy Manga. ‘Patlabor – The Movie’ just a year after that. 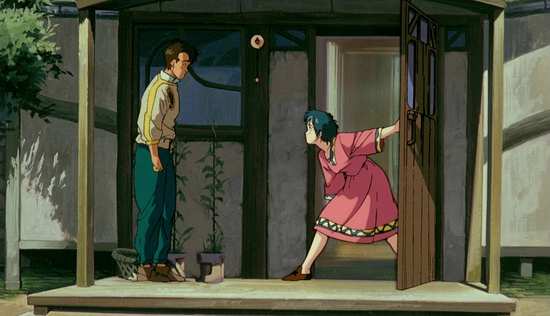 The film is set in an unknown land at an unknown time, either slightly in the past or in the near the future. Whilst not quite ‘Steampunk’ it’s not a million miles off, combining old technology with new with the creation of a Heath-Robinson inspired rocket, for example, that looks like it’s been cobbled together with any old pieces of material and technology. 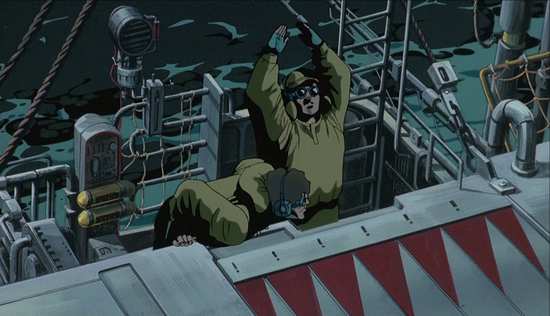 The film opens with a bizarrely dressed group of ‘soldiers’ who are attending a wake for a fallen colleague where one of their number, Shirotsugh Lhadatt (Shiro) arrives late and is not even wearing a uniform. The whole group, who are members of a Royal Space Force (despite the fact that space travel has not yet been possible) are under-motivated and comprise a group who somehow haven’t managed to get into more prestigious military groups like the bonafide air force, for example. 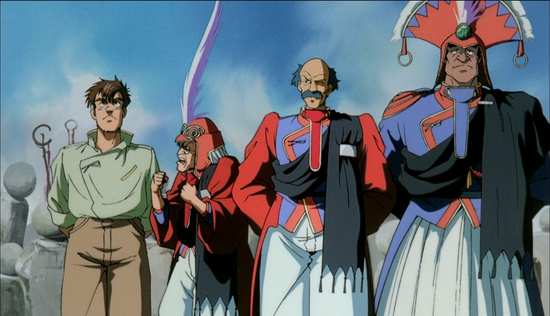 Shiro is one of the laziest and least motivated of all, doing all he can to avoid training, particularly if it looks even remotely dangerous. One day, whilst his buddies are whooping it up with some of the looser women in the city, he bumps into a girl called Riquinni. She has an innocent aura and he finds himself drawn to her purity and benevolent spirit as she preaches on the street about the need for devotion to God. 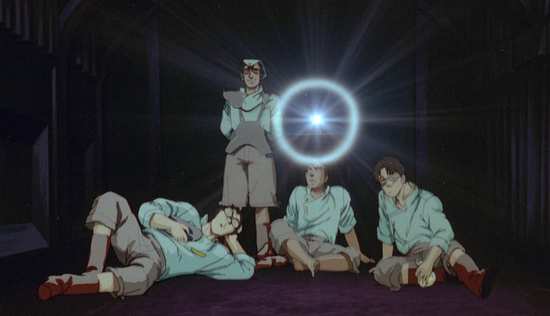 Shiro impresses her with his talk of hs big calling – to serve in space no less – and she laps it up, believing that he will be even closer to God. Whether he believes his own hype, or is just keen to impress Riquinni, he suddenly devotes himself so totally to his ‘calling’ that he becomes the only volunteer to man a supposed space trip. Hie friends don’t know what’s come over him and everybody assumes that it will be nothing more than a suicide mission – or that it will never really happen at all. 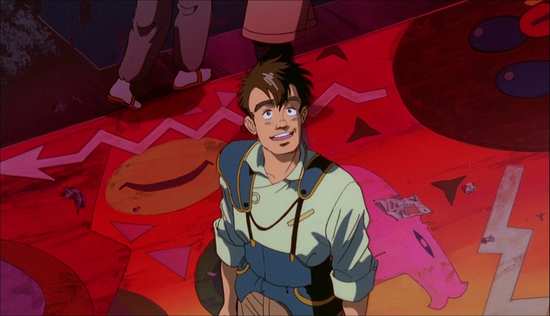 But despite more than 20 years of failing, the technical teams behind the Royal Space Force actually think they might finally be able to put a real living human being into orbit – and Shiro is the man fro the job.
But war is between the Kingdom of Honneamise and "The Republic" is brewing and this noble cause soon gets commandeered by politicians who see it as a propaganda opportunity at least, and an opportunity to create the ultimate destructive weapon at worst. 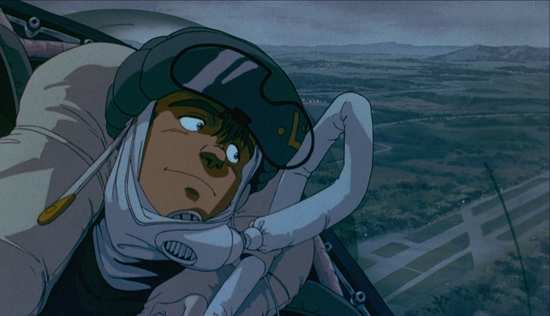 He is soon a national hero and his image can be seen on billboards and televisions throughout the city. When it all gets too much he stays with Riquinni and her small brother but one evening, seeing her undress, he almost forces himself upon her which almost spoils their relationship. But Riquinni forgives him and it is understood that his love for her is not just spiritual. But they have both learned something from each other and he seems stronger, more mature perhaps as he inches his way towards his big mission.

Eventually the ship is ready for launch although the Government are hoping that its launch will provoke their enemy to war. This cynical move works and the Republic launches an invasion.

The general, seeing the imminent attack, suggests they abort the mission but Shiro persuades the crew to go ahead and launch anyway. In a sublimely poetic end sequence, Shiro’s life plays out in front of him as he floats in space above the tiny world below. 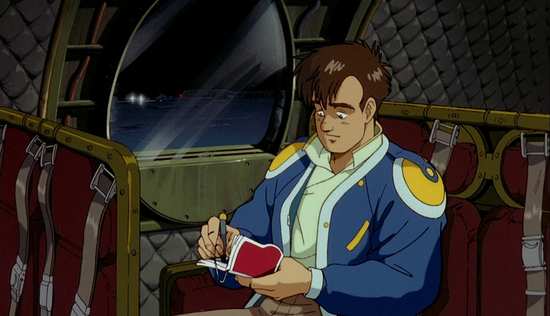 Condensing this excellent film into this brief narrative essence does it no justice. It needs to be watched to be appreciated. Its visual detail is just stunning, more like Studio Ghibli than ‘Speed Racer’. Every aspect of the film is superbly imagined and the screen carries a level of rich detail rarely seen in animated films. The animation itself is fluid and the flight scenes dramatic and exciting – all in a pre-CGI age where such things became par for the course. 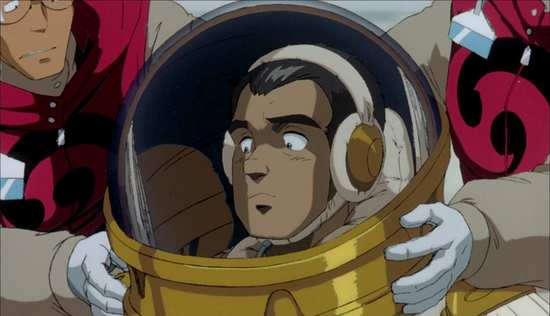 I was also pleased to note that the soundtrack was scored by Ryuichi Sakamoto, who many will know from his collaborations with David Bowie and David Sylvian in the 1980’s, along with his Oscar winning score for ‘The Last Emperor’ the same year as this was released. He also scored ‘Merry Christmas Mr. Lawrence’ which is one of the very few Soundtrack albums I own. He does a fantastic job with the score here too – always sympathetic and curiously timeless too. 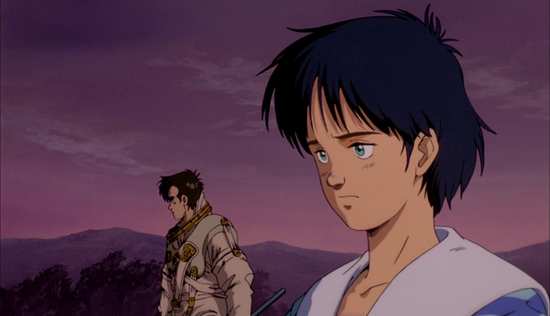 The characterisation is excellent too – highly realistic, subtle and totally believable and this is reflected by the voice-cast. I watched the US dub version of the film which was top-notch. Again, the voice-cast did an excellent job reflecting the nuanced characterisation and deliver their lines with untypical subtlety – all adding to what feels like a high quality end result. (You get an option to watch in original Japanese with subs and I’ll give this a go when I next view the film).

The film is an incredibly thought-provoking experience. We get all the usual contradictions between the natural world (as represented perhaps by Riquinni) and the white heat of technology, represented by the space programme. Questions are raised by street beggars about the cost of the programme when so many are going hungry on the very planet the ship is due to leave – all the stuff that NASA has to face in the U.S.

Extras on the disc(s) are few. There’s the original 1987 trailer as well as a cluster of other release trailers. Finally there is a ‘pilot’ for the film which, despite my excitement at seeing it there and imagining something a bit lengthier is a mere 4 minutes-ish. That said, it does show how the film-makers envisaged the finished film and sold it convincingly to their backers.

‘Royal Space Force – The Wings of Honneamise’ is far too good a film to miss. It should be filed alongside your copies of ‘Spirited Away’ and ‘Princess Mononoke’ or perhaps even on the same shelf as ‘Citizen Kane’ and ‘Vertigo’. Yes – it’s that good.

Now go out and get yourself a copy.