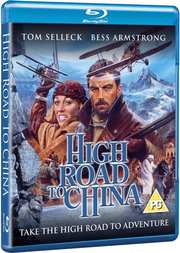 Review for High Road To China

Little things that bug you... For me it’s the fact that my parents finally got hold of an HD TV, and spend all day watching the Indian channels on satellite, which are transmitted in something approaching VHS resolution. Even when it comes to the mainstream terrestrial channels, they watch the SD versions, as they are used to pressing 1, 2, 3 and 4 on their remote, not 100 and something or whatever Freeview uses for its HD channels. “I have to introduce them to what high resolution is all about”, is what I thought, and how better to do that than with one of their favourite movies on Blu-ray. As far back as I can remember, I know that they loved the action adventure movie High Road to China, the consolation prize for Tom Selleck when he couldn’t do Indiana Jones, and his first starring movie role. I also remember quite enjoying it myself when I was a child, so when I spotted the Blu-ray of the film on sale, it seemed like serendipity. Of course I’d watch the movie first to see if it was as I remembered, before using it to open my parents’ eyes to the world of HD... 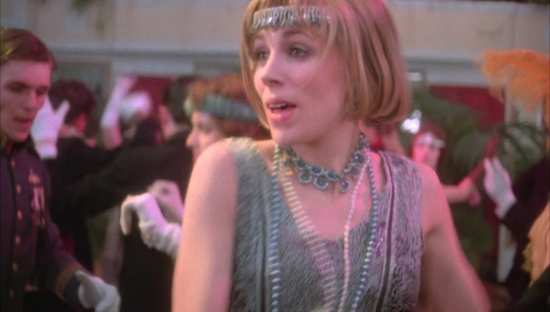 It’s 1920, and heiress Eve Tozer is living up to her reputation as a serious party girl. But the bottom is about to fall out of her life when she learns that her father’s business partner, Bentik is about to have Bradley Tozer declared dead. That way Bentik inherits the company and Eve is left with nothing, certainly no money to continue her party lifestyle. She has just 12 days to find her father and bring him before a British court to stop Bentik getting everything. The problem is that the last anyone heard of Bradley Tozer, he was in Afghanistan, specifically Waziristan, which is currently at war with the British Empire. She needs planes and a pilot to take her there, and when her usual circle doesn’t immediately volunteer, she has to settle for drunken pilot Patrick O’Malley. He’s not too enamoured of the idea of flying a spoiled rich brat into a warzone, but the promise of a significant payday changes his mind. But they’ll be flying into danger, and not just from the Waziris, as Bentik isn’t about to allow a reunion between father and daughter. 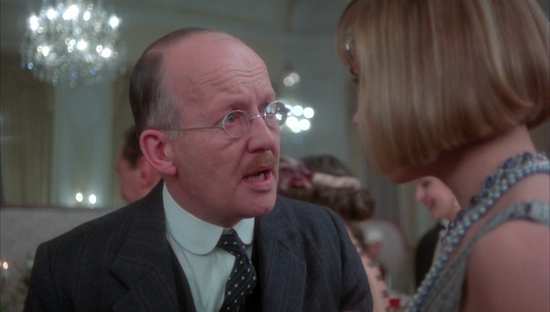 High Road to China gets a 1.78:1 widescreen transfer at 1080p resolution, on a single layer disc. The US release was apparently dual layer. It is at least a step up from the previous European DVD release as that was a pan and scan affair, but really this is a dismally poor transfer. The print is relatively stable, clean with little sign of age, but it’s a soft and low resolution affair, replete with compression artefacts and with macroblocking visible even from my normal viewing distance. Detail levels are low, while reds are over-saturated almost to the point of bleeding. Fortunately (did I say fortunately) High Road to China is a drab and grey affair when it comes to its colour palette, and reds aren’t exactly forthcoming. The colour balance exceeds what a DVD can offer, true, and you do get a genuine progressive transfer, but otherwise this looks like an upscale, and I’m tempted to suggest looking up the US NTSC DVD release to see if your player can do a better job of up-scaling than the transfer on this Blu-ray. 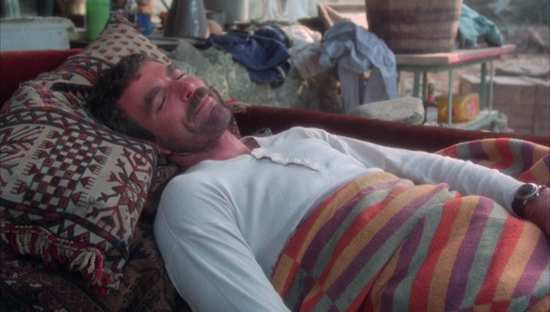 It gets worse. The audio is presented in the original mono form, but unlike the US Blu-ray with its lossless track, we get a audibly compressed DD 2.0 mono track on this disc, which struggles when the action scenes get a little too strident, and with the whole thing sounding muddy, the higher frequencies muffled. The dialogue at least is clear throughout, and Hard of Hearing English subtitles are available if you need them. John Barry supplies the music soundtrack, and while his theme echoes the soaring romance of the story, it doesn’t really live up to the action sequences, and does for me drag the pace down a tad. It’s more a score for an ocean adventure aboard a sailing ship, not a world war one flying ace in a Sopwith Camel. Incidentally, the audio drifts out of sync for a minute at the 38 minute mark. 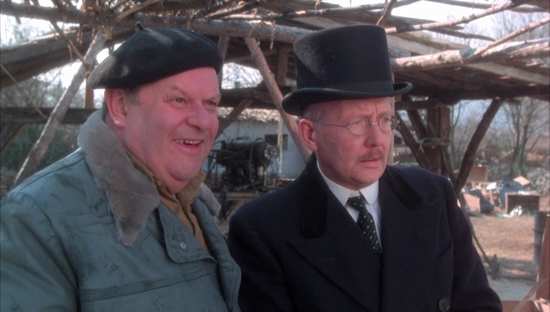 It’s worse even than that. The disc presents its content with an animated menu, and the only extra is the 2 minute trailer for the film, the one place on the disc you’ll actually get to see the film in high definition.

The disc comes in a Blu-ray Amaray, with the poster art used for the cover. They’ve merely cut and pasted a generic DVD specification where the Blu-ray spec should be, so take the promise of an English 5.1 track with a pinch of salt. 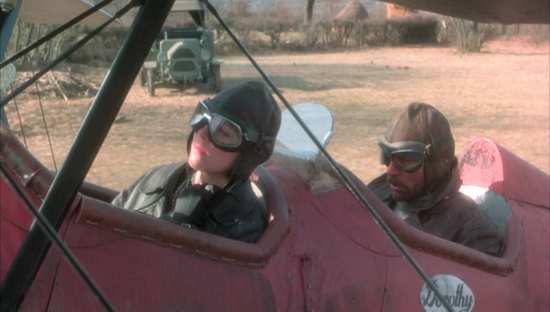 I’m going to lie to my parents. Henceforth this is the High Road to China DVD, and a fairly average one at that. I’ll have to keep looking for a decent Blu-ray disc with which to open their eyes. This Blu-ray presentation of High Road to China is abysmal, and it now holds the title of the worst Blu-ray I own. It isn’t even worth pointing fingers, as Mediumrare’s presentation of this film isn’t unique. The poor audio is a constant it seems, with purchasers of the US disc having similar complaints about its uncompressed DTS-HD mono track, while the poor image quality is a constant regardless of disc (although the Australian disc apparently goes one worse with a 1080i transfer). The fact of the matter is that 30 years on, High Road to China is a poor, unloved, and mostly forgotten cousin of the Indiana Jones franchise. Prior to its Blu-ray release, it never even had a DVD release in the US, while the European DVD releases (it also never saw a UK release prior to this Blu-ray) were all pan and scan. 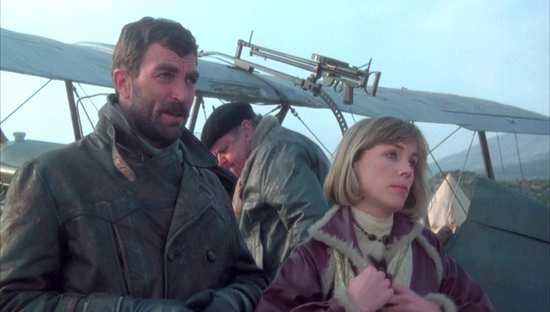 We really shouldn’t expect better for High Road to China, as it’s not really that good, certainly not as good as I remember it to be from childhood, when I could be bribed by some emphatic flying sequences. I was surprised, thanks to a logo, to learn that this is actually a Golden Harvest film, the creators of all things kung-fu cinema branching out into worldwide distribution, and I also found it charming that the then Yugoslavia managed to double for every international location on the Silk Road. 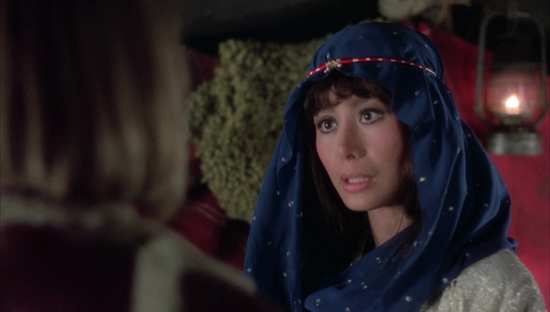 High Road to China is supposed to be a grand adventure and romance. But it feels weak in both regards. Tom Selleck and Bess Armstrong don’t really light up the screen as O’Malley and Eve, and there isn’t a lot of chemistry between them. There are certainly a few likeable moments, but there doesn’t feel as if there’s a romance developing so much as it just happens as the script dictates. The adventure too is unexciting, piecemeal and free of adrenaline. There are moments that sparkle certainly, although that’s down to Wilford Brimley’s dotty General at the end of the film, and Brian Blessed as the loud Afghan chief offended by all things female, it’s never down to the main cast. Bentik and his butler provide some comic relief back in England, but really have nothing to do with the main story, and apparently Robert Morley’s scenes were shot and added following poor previews. There’s no suspense, no build-up, and no tension. There are just little speed-bumps of excitement on an otherwise flat and tedious tarmac of narrative. 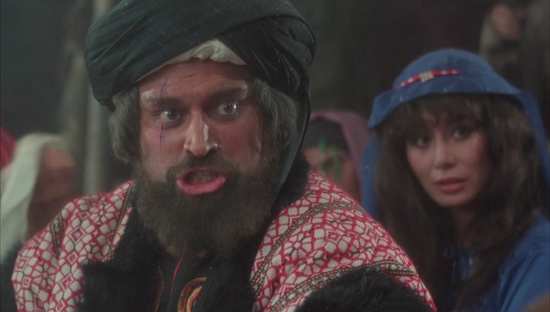 However, I do still appreciate the flying sequences; there are some genuinely entertaining aerobatics to appreciate. The dogfight with the random German flying ace is certainly a high point of the film for me. For the close-ups however, the production team didn’t even bother to lift the tail of the aircraft, and it’s patently obvious that the actors are on the ground, fans feverishly blowing wind in their faces. 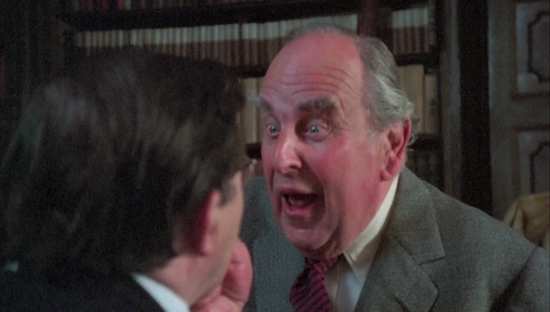 High Road to China is likeable enough; it plods on its merry way, stringing entertaining scenes together, and with enthusiastic performances from the cast, even if the characters aren’t quite believable together. It lacks the narrative structure to be anything other than a series of loosely connected moments, but fits the bill for a Sunday matinee movie, when thought and consideration aren’t required from a viewer. This Blu-ray however is abysmal, and the only reason to buy it is that there aren’t any better options out there on DVD.