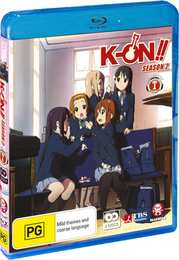 It was inevitable that I would continue the Blu-ray double-dip upgrade to the second season of K-On!! (note the 2nd exclamation mark), importing again from Australia, but this time I opted not to get the release with the optional artbox for both releases, as quite logically for the second season, the standard releases were cheaper. It’s been a long hard road to get K-On on Blu-ray, both for me and in the West in general. Season 1 was licensed and released by Bandai in the US, on Blu-ray and DVD, which as usual worked its way around the world to the UK, but by the time it got here, Manga Entertainment went and cancelled the Blu-ray release, leaving me to import it from Australia. But then Bandai US ceased operations, leaving season 2 up in the air. That was eventually licensed by Sentai in the US, who also licensed the K-On! movie. Manga Entertainment only went Blu for the movie release on that one. Bandai Entertainment’s treatment of the show on Blu-ray was hit and miss, the release format was a miss, the image quality was a palpable hit, while the audio was distinctly of the DVD era. Sentai at least would offer lossless audio, and have thirteen episodes per release, not thirteen episodes over four releases, but they’re not exactly renowned for their visual standards... 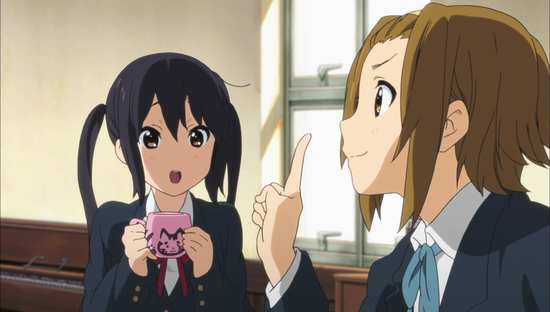 Yui Hirasawa spaced out her way through elementary and middle school, but once she got to high school, her friend Nodoka convinced her to at least try some sort of extra-curricular activity, lest she became a NEET. She chose the Light Music Club, inspired by some happy memories of playing the castanets in nursery school. She wasn’t quite ready for what membership entailed. She wound up lead guitarist in a rock band, Hokago Tea Time; on bass is the seriously minded, and seriously shy and easily spooked Mio Akiyama, while Mio's best friend, the brash and outgoing Ritsu Tainaka is the drummer. On keyboards is fellow surprise recruit and warm-hearted rich kid Tsumugi Kotobuki, and in the second year of high school, they got a new recruit in Azusa Nakano, also a keen guitarist. In Season 2 of K-On!!, the girls start their final year of high school, one last year in which to hit the big time, and one final year that promises big changes for the band, not least as four of their number will graduate. Of course none of that is really as important as tea, cakes, and having fun. 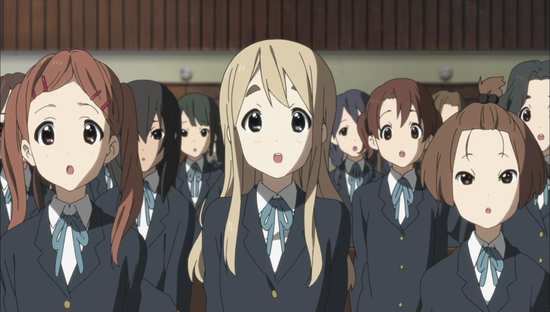 The first thirteen episodes of K-On!! Season 2 are presented across two discs by Madman Entertainment thus. This is more a review of the technical quality of the Blu-ray, although you can read more about these episodes in the review of the DVD. 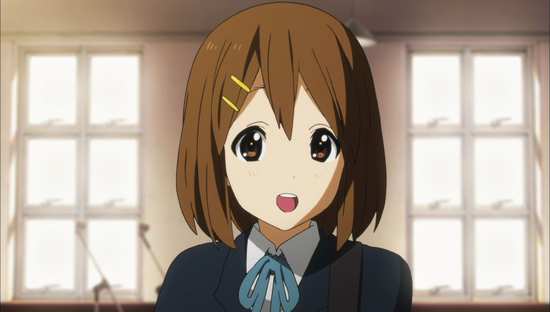 This is actually what I was expecting when I got the Bandai sourced Season 1 Blu-rays, but was instead surprised at a largely excellent video transfer, rich in detail and very well balanced. That kind of spoiled me for season 2 of K-On!!, which actually comes across with the usual treatment that companies like Sentai and Funimation give anime on Blu-ray, a treatment that I would be very happy with under normal circumstances, but now I have something better to compare it to, it comes across as a little underwhelming. 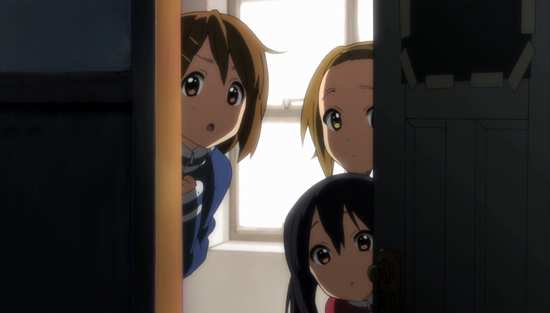 You get the show in 1.78:1 widescreen 1080p resolution and ratio. The image is clear and sharp, detail levels are high, and the line art comes across without issue. It’s just that as so often happens with anime on US Blu-rays, brightness levels get lost in translation and shoot way up. This didn’t happen on the Bandai transfer of Season 1, but it happens with Sentai’s treatment of Season 2, and that results in a bright hazy feel to the image, almost to the point of over-exposure, and colours can seem washed out, particularly the deep blue of school uniform jackets. This can be fixed by manually altering the brightness on your television, but you can’t get rid of the resultant digital banding, and odd moments of macro-blocking. In recent years, I’ve come to accept this as the state of play for Blu-ray anime sourced from Sentai and Funimation, but it’s harder to do here when there is the positive source of comparison that are the Bandai discs. It’s still light-years ahead of the DVD transfer though. 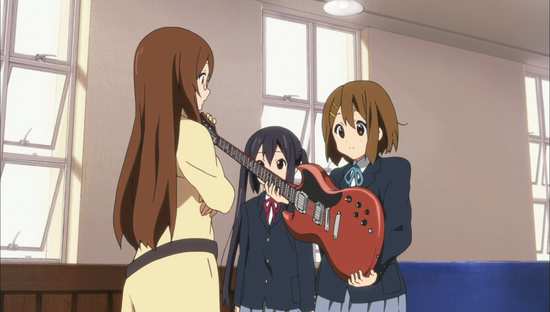 You have the choice between DTS-HD MA 2.0 Stereo English and Japanese, with optional translated subtitles and a signs only track. This is what I was hoping for from the Bandai disc, lossless audio, and I have to admit that I could tell the difference, richer, more vibrant audio with more depth and clarity to it. The dialogue is just that touch crisper, the music sounds fuller, and it’s easier to define the elements of the audio mix. I didn’t bother with the English audio this time, and stuck to the Japanese track, aside from just checking that it was there. In terms of subtitles, these are effectively the Sentai discs, so one or two questionable translation choices do crop up (although the Bandai release did have the ‘power of cute compels you’ line). 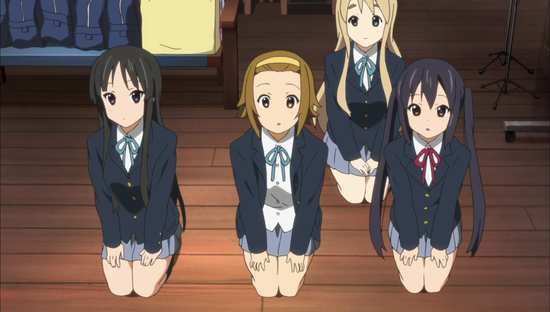 And a reminder that the Madman DVDs were sourced from the same HD materials as the Blu-rays, Episode 11 still has the distorted Japanese audio track, which sounds muddy and muffled. One of the ‘benefits’ of the lossless audio is that it’s possible to recognise that the distortion only affects the music and effects tracks, not the dialogue track which sounds fine. As these elements are usually delivered separately to US distributors for local authoring (it’s hard to dub an anime if the original dialogue is still there), it becomes possible to see where the error in audio crept in. 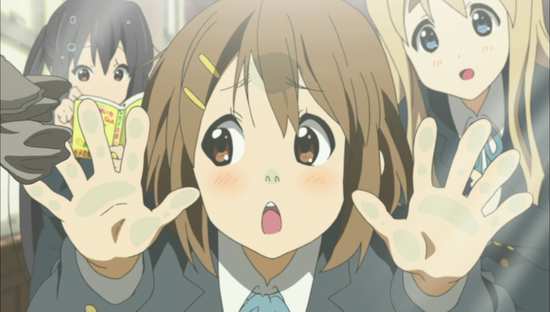 You get two discs in an Amaray style case, with one held on a central hinged panel. Madman once again present some poster art on the inner sleeve. The disc art now features the characters (Yui disc 1, Mugi disc 2) holding audio cassettes, with the reels of the cassettes coinciding with the hub of the discs. The discs present their content with static (and visibly compressed) menu screens, and each episode ends with a silent, white on black translated English credit reel.

The only extras are on disc 2 and amount to the textless credits (sorely missed on the Bandai discs), while there are Madman trailers (following an Aussie anti-piracy ad) for Arrietty, Ponyo, and Laputa Castle in the Sky. 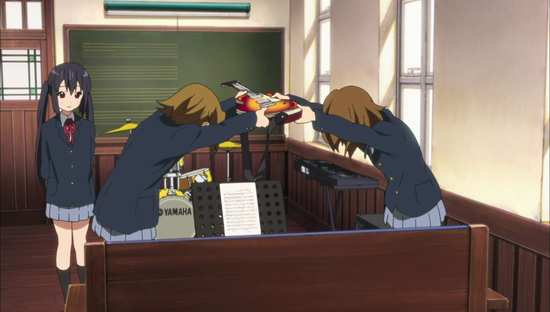 My heart wants to give this release a 10 out of 10. I love K-On!, and that sentiment extends to the sequel series K-On!! as well. I’m in my own little anime heaven with each episode, and for 20 minutes, everything is right with the world. My head tried slapping some sense into my heart for the first season and failed miserably. For season two, either my head is wearing a knuckleduster, or my heart knows when to stop pushing the issue. Because there are things about Part 1 of Season 2 that I just can’t justify or rationalise away, much as I would love to. 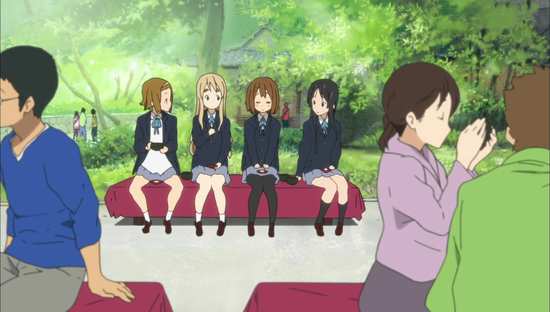 For a show that’s all about the cute and inconsequential, a slice of life experience where the biggest drama might be someone catching cold for half an episode, it’s a bit of a cheek to point to filler material, but Season 2 really does feel like Season 1 diluted. Season 1 had a rhythm and pace to it, interludes of triviality punctuated by musical performances. Season 2 has about the same level of musicality to it, but spread across 26 episodes, not just 14, it’s one school year, not two, so it really feels one quarter as effective as the first series when it comes to the overall arc of the story. There’s a lot more of the cute girls doing meaningless cute things in this series. I’m cool with that. That’s a main reason why I like K-On, but there are one or two episodes where the pace begins to sag even for me. That would knock the show from Spinal Tap territory to just a plain actual 10. 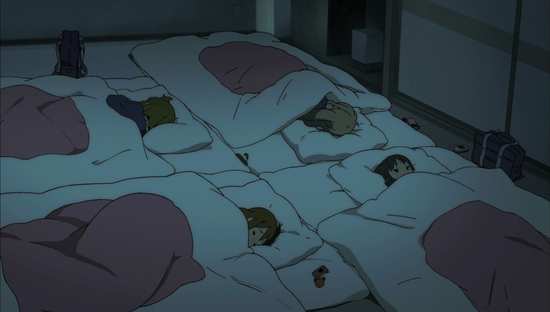 And were it not for the Bandai discs, I wouldn’t feel justified in picking nits at the visual transfer, which is on a par with the usual Funimation and Sentai sourced Blu-ray transfers, clear, sharp, detailed, but hamstrung a little by the gamma auto-correction algorithm that these two distributors automatically apply to all anime that they release. I’m used to colours bright to the point of being washed out, digital banding, and a hint of compression on most of the Blu-ray anime that I watch, and have come to take it for granted, only really enthusing when an Aniplex transfer shows up without the usual issues. But Bandai’s release of Season 1 showed how K-On was meant to look, and that Sentai couldn’t match it is very much a weakness of this release. 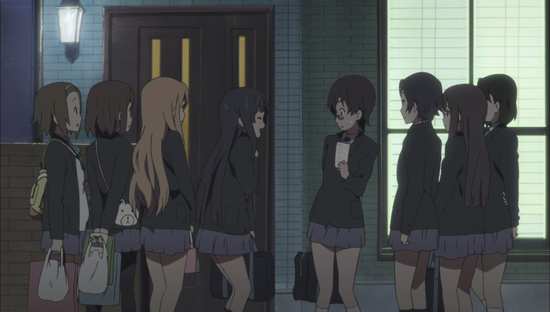 Finally there is the audio muck up of episode 11, admittedly an episode light on music so it really doesn’t tell for much of the time, just the odd interlude and the credit sequences, but it’s an error that should have been caught, and should have been fixed. So for K-On!! Season 2 Part 1, my heart still insists on this being a ten out of ten show, but my head injects a cold dose of realism at this point.