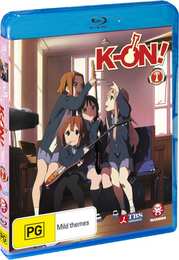 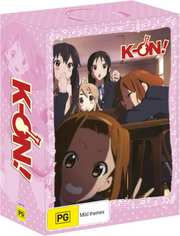 Next in my series of quickie Blu-ray double-dip reviews is the K-On! series, which conveniently (for the first time around anyway, matches the UK DVD release format. Sentai subsequently went and licence-rescued the first series, and re-released it as a complete series, but as DVD only to date. The first release of K-On! in the US came from Bandai, and when I read about how their audio was restricted, I thought I would be happy with the UK DVDs, which had more bits in their Dolby Digital. But the bottom line is that K-On! is an anime about The Light Music Club, emphasis on music, and when it comes to such, I want to hear it as intended, not 4% faster with the distortion of pitch correction on Manga’s Madman sourced DVDs. I had K-On! down for a double dip regardless, Region 1 NTSC DVDs if I couldn’t get it on Blu-ray. 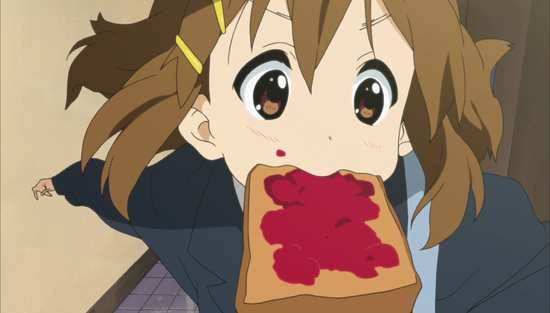 It certainly didn’t look as if I would get it on Blu-ray, as Manga had initially promised it that way, and had even set a release date, before cancelling the release at the last minute. Bandai Entertainment had released the Blu-rays in the US, but had the temerity to go out of business not long after. Not that it would have helped, as their discs were Region A locked anyway. Fortunately Madman Entertainment in Australia released K-On! on Blu-ray Region B, and following a useful discount, I had the show on my desired format in my eager hands. I hadn’t even given any thought to how it would look, how Bandai’s treatment of the KyoAni animation would fare. It turns out to be pretty good, although the audio... 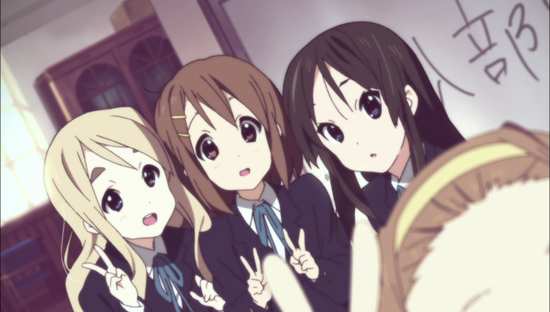 Yui Hirasawa has spaced out her way through elementary and middle school, and history looks set to repeat itself when she starts high school. Even though she is eager and excited about her new life as a high school student, after a few weeks pass, and after every extra-curricular club in school has courted her, she still hasn't decided on which one to join. It's when her friend Nodoka gently informs her that she's on her way to becoming a NEET, that she finally picks a promising flyer and fills in the form. She chooses the Light Music Club, inspired by some happy memories of playing the castanets in nursery school. She isn't quite ready for what membership entails. 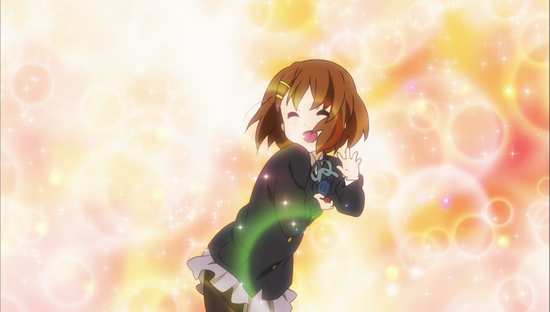 The first four episodes of K-ON! are presented on this single layer Blu-ray from Madman Entertainment.

I reviewed the first volume in detail on DVD, and you can click on that review to read more about the show. This review will concentrate more on the merits of the Blu-ray. 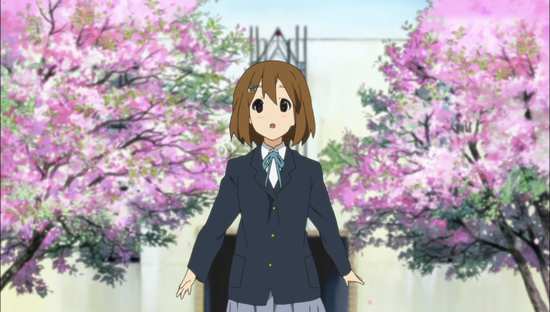 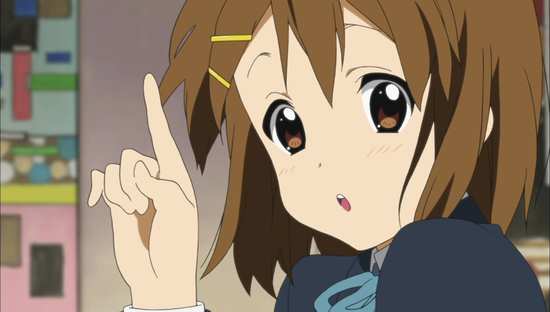 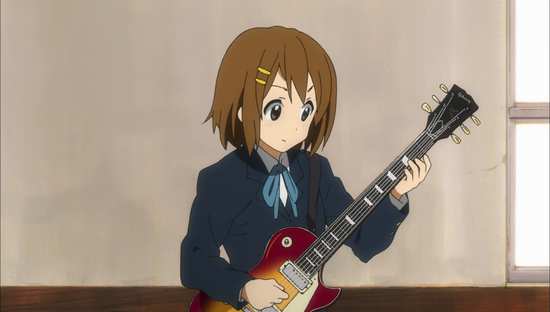 When it comes down to it, I didn’t care that the frequency response was inferior, that the resolution of the audio was such that it would be much less vibrant in comparison. For me, the dialogue was clear enough, and the all important music sounded great, and above all, it was all at the intended 24 frames per second, without that egregious pitch correction that marred the PAL DVDs, although the song replacement is still there in episode 1. 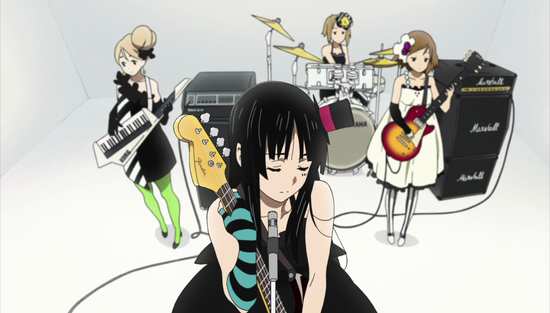 Bandai offer optional English translated subtitles for the Japanese audio, and a signs and songs track for the English, and it’s all done in a nice, discrete, but legible yellow font. The subtitles are free of typographical error (except for one line which uses “We” instead of “Why”) and accurately timed, but once or twice I saw signs translations that were out of sync with the onscreen text. 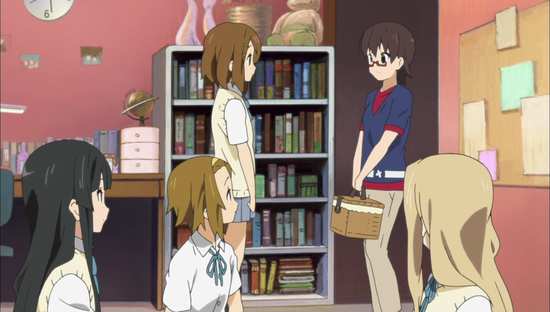 I went for the Volume 1 from Madman Entertainment that comes with the chipboard artbox for all four volumes of the series, which apparently is an Australian exclusive. It’s an appealing pink affair, with character art front and rear, the blurb on the base, and marred only by that oversized Australian ratings logo. The disc label art is pretty nifty too, with Yui framed in a bite sized hole in a doughnut, the central hole of which coincides with the centre of the disc, and you also get poster art on the inside sleeve. 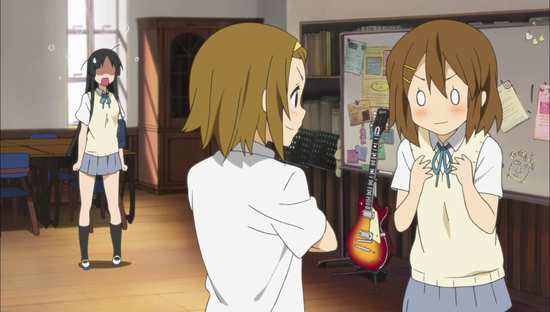 The show gets an animated menu screen, and the only extra on disc is a 10:21 interview with the English voice of Yui, Stephanie Sheh presented in 1080i. She discusses the character and the show, and also talks about how the show relates to her own experiences of high school.

There are also Madman trailers for Summer Wars, Evangelion 2.22 and The Girl Who Leapt Through Time. 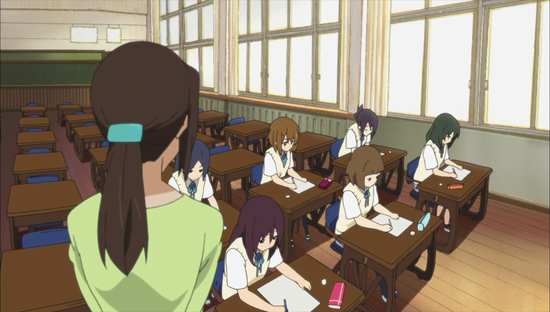 I’ve passed the point of rational analysis with K-On! I might term it a guilty pleasure, if I felt at all guilty about watching it. Is it my favourite show? There are better shows out there, there are shows that I rate more highly, and I know full well that K-On! has its flaws, its weaknesses and points of criticism. But the bottom line is this. At this moment in time, there is no show out there that I enjoy watching more. When I put an episode of this series on, I’m in my happy place, and I will stay there even after the end credits have rolled. I like the characters, I like the interplay between them, I love the silliness and the triviality, and I adore the humour. One of the hardest things to get right in anime is comedy, comic timing, but K-On! always gets it right, and I laugh out loud at this anime more than any other. As such, my review of the DVD probably marks the last time that I could view this series through the eyes of a critic. 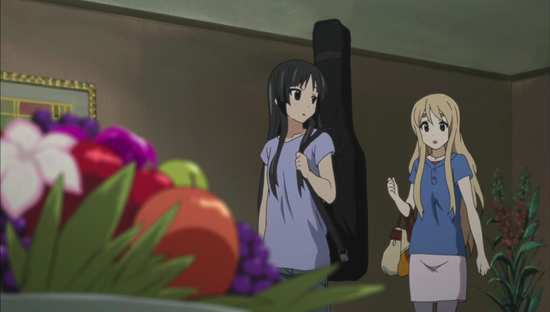 But I have to say I love the Blu-ray. I would have loved it even more with lossless audio, but the quality of the HD visuals goes beyond what we normally see from the mainstream anime companies, and rivals what the best of the boutique labels offer, and those mega expensive Blu-rays imported from Japan. Only this K-On! isn’t mega-expensive, as Madman Entertainment are still trying to clear their stock of the individual releases to better promote their four-disc collection. You can have K-On! on Blu-ray Region B at a bargain price. 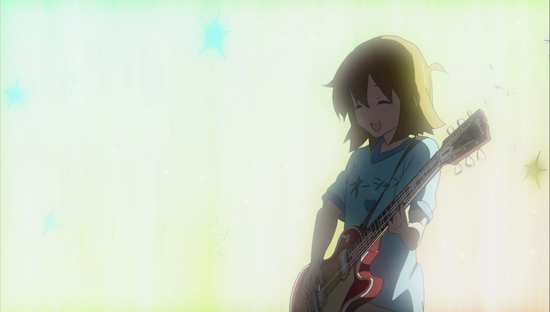 Blu-ray moment of the disc... Yui’s ‘guitar solo’ in front of a fireworks display!