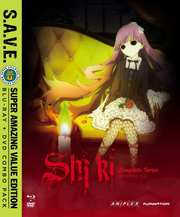 Manga Entertainment released this unconventional vampire anime series on DVD a couple of years back, a show that took its time, but eventually grew on me as its fascinating story unfolded. But one thing that was immediately apparent, Shiki’s stunning visuals simply called for an HD presentation to truly appreciate. After I sorted out a little confusion about the US disc’s region coding, I resolved to double dip, but only when it was on sale. After all, while Shiki is a great show, it isn’t exactly what I would call top tier. I waited for Funimation to give it its eventual budget re-release, and sure enough when the S.A.V.E. edition was announced, I quickly placed a pre-order. 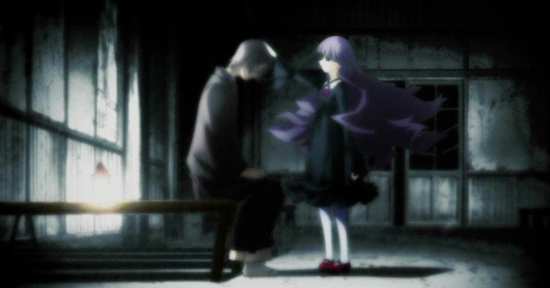 And I cannot tell you a thing about it. I got struck by lucky bastard syndrome, as Shiki has turned out to be a show that failed to hit its numbers for Funimation. It seems that fans want their vampire anime to be conventional, not unconventional, and for the first batch of S.A.V.E. orders, Funimation opted to clear out the stocks of the limited edition instead. What I can tell you is that when you place an order for the Shiki S.A.V.E. release, you will get eight discs, four DVDs and four Blu-rays most likely in an Amaray fatpack, with the artwork marred by a garish green stripe, but reversible if you’re lucky. By now, you won’t get the two Amaray cases with four discs apiece held in two central hinged panels per case, all bundled in a thick card artbox. Lucky bastard indeed! 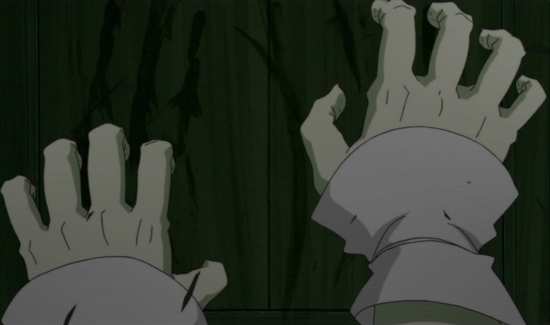 Something sinister is afoot in Sotuba village. It’s an isolated hamlet far away from city life and major transport connections. It’s hidden away in the countryside, a small, interknit village where everyone knows everyone else. One hot summer, people suddenly start dying, and for no discernible reason. You might expect the old to pass in such heat, but this apparent epidemic affects everyone equally. Three people investigate this strange development. The monk Seishin talks to relatives of the deceased and notes some odd behaviour in them before their deaths. The Doctor Toshio notes that the dead die of anaemia, but the odd sort of anaemia that comes with exsanguinations, yet there are no wounds on the bodies. High school student Natsuno Yuuki was one of the first ones affected, when his stalker Megumi died. Now his nightmares are being haunted by her image, and he can’t shake the feeling that he’s being watched. And a strange new family has just moved into the European style mansion on the mountain outside the village... Slowly the shocking truth is revealed... the dead aren’t staying dead. 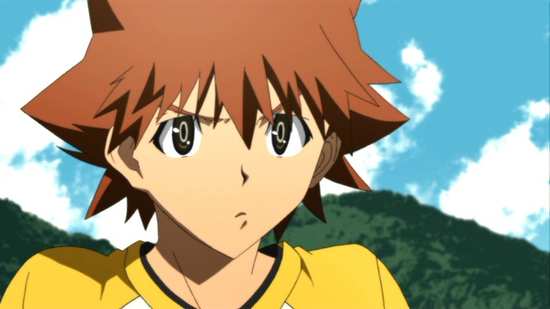 I reviewed Shiki on DVD for this site, and rather than go through the cut and paste rigmarole, I’ll just link you to those reviews, as my opinion has changed little. This review will concentrate on the quality of the Blu-ray release.

The 24 episodes of Shiki are presented across 4 Blu-ray discs thus. 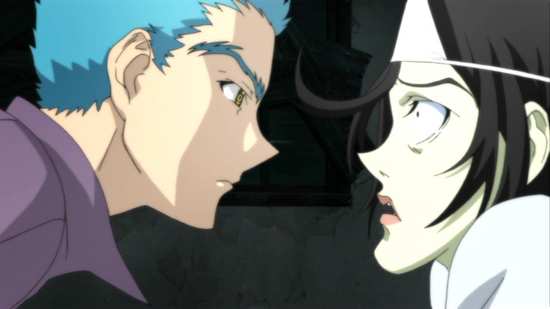 The episodes and the extra features are repeated on the progressive NTSC DVDs in this collection, but each disc has six episodes, just as on the Manga release. 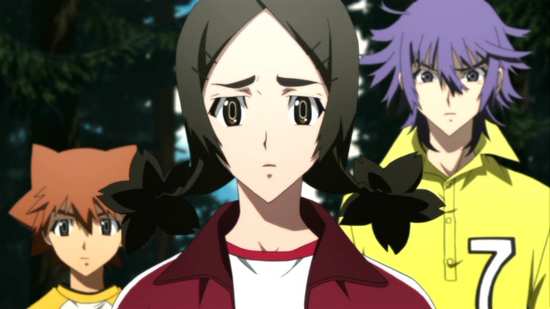 Shiki gets a 1.78:1 widescreen transfer at 1080p on these Blu-rays, and sure enough, they are just what I expected from Funimation. The promise of those off-beat visuals from the DVDs is realised here with excellent impact. There are no visible signs of compression (unless you press pause during the swirling flower petals bit of the 1st end credits and get up close to the screen), the show’s amazing colour palette is presented here with vivid vibrancy, and character art and line detail is flawless. The progressive transfer also allows for the smoothest of animation. About the only annoyance would be the odd moments of digital banding, most prevalent here during the darker scenes, and given Shiki’s subject matter and tone, there’s a little more banding than usual. 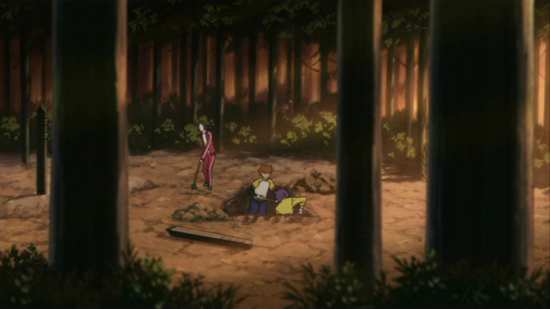 Shiki is a blend of the unique and the familiar. The character designs are the usual anime touchstones, and conform to the usual stereotypes, although Shiki does has a larger than usual proportion of older characters. The differences come in specific areas of the character design; the eyes for instance are unlike any other anime I’ve seen, not just for the vampires but the humans as well, a curious combination of light and dark. Hairstyles too are really quite bizarre for such a serious show, and do often look out of place. 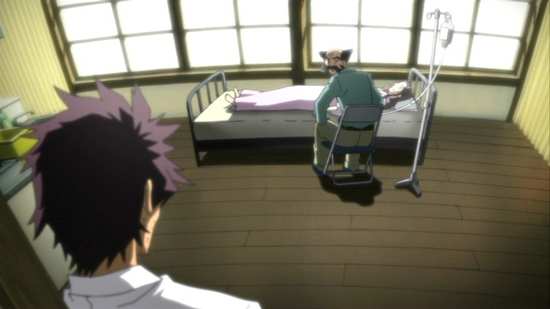 The world design is solid, and the animation is clearly a well budgeted affair, of decent quality throughout. It’s interesting to see the mood of the show change. It starts off as a sleepy summertime anime, replete with bright colours and over-exposed sunlit scenes, but as the story develops it takes on a darker and darker tone.

The images in this review are taken from the DVD component of the release, and aren’t representative of the Blu-ray quality. 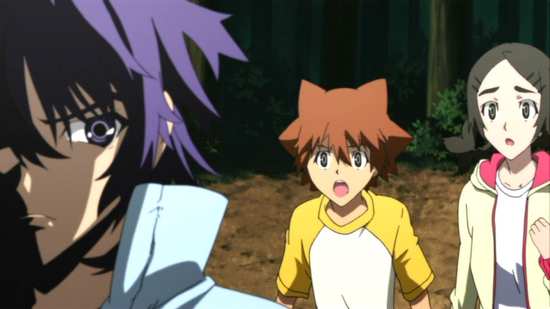 You have the usual Funimation options of Dolby TrueHD 5.1 Surround English, and Dolby TrueHD 2.0 Stereo Japanese, with player locked translated subtitles for the Japanese audio and a locked signs only track for the English dub. The dialogue was clear throughout, and the show’s creepy sound design worked well with a little Prologic magic for the stereo track. The music suits the show well, as do the show’s theme songs. You can’t imagine anyone much more appropriate than Buck-Tick to supply the opening theme to a vampire anime. I gave the English dub a try, and found that the 5.1 option gave the show a fair bit of space. One thing that I did feel was that both dubs, English and Japanese, seemed pretty generic in their voices, conforming to the current stereotypes with regards to actor and character. That said, those stereotypes when placed in the context of Shiki’s story simply added to the eerie feel. 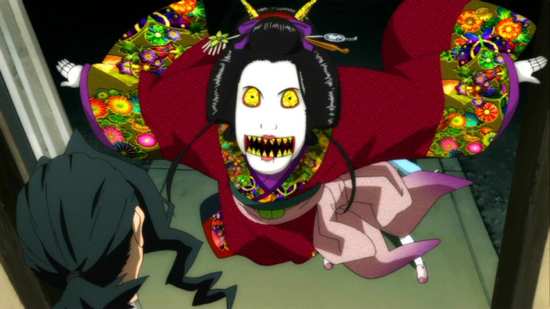 The discs present their content with animated menu screens.

Disc 1 kicks off with a trailer for Dragon Age: Dawn of the Seeker.

The sole extra is the audio commentary that accompanies the first episode. In it ADR director Mike McFarland (Yuuki), is joined by Jerry Jewell (Natsuno), John Burgmeier (Seishin), and David Wald (Toshio) to talk about the show. It’s an interesting commentary from Funimation for a change, which shies away from the usual frivolities of a cast commentary. 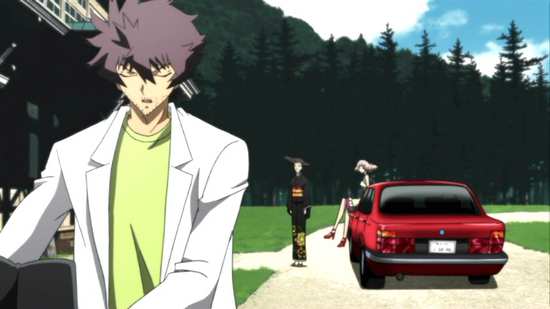 Disc 2 starts with a trailer for the Trinity Blood Blu-ray.

This has an audio commentary accompanying episode 12. It features Mike McFarland again, this time with Chris Burnett (Toru), Tia Ballard (Megumi), and Alexis Tipton (Kaori). In the first three minutes I encountered two spoilers for the second half of the series, at which point I stopped listening.

You’ll also find four preview featurettes running to a total of 7:34. Titled Reflections By Seijin, they look like the next episode previews only a little longer, and are in subtitled Japanese only. It’s obvious they accompanied the individual Japanese volume releases.

You’ll also find the first two textless credit sequences, although given the locked subtitles, they aren’t truly textless on this disc. 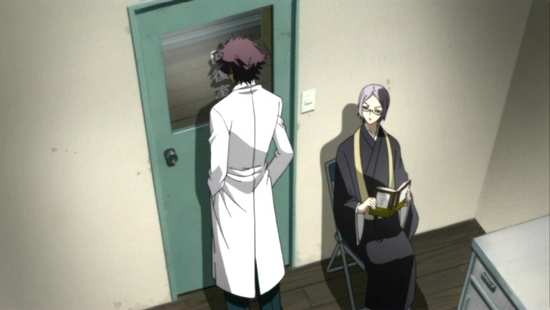 Disc 2 concludes with other Funimation trailers for Ghost Hunt and D-Gray Man in SD, as well as .hack//Quantum, the Fullmetal Alchemist Brotherhood OVAs, Dragon Ball Z Kai, Panty and Stocking With Garterbelt, and Black Butler in HD.

Disc 3 commences with a trailer for Black Butler Season 2.

You’ll find an audio commentary to accompany episode 18. In it, ADR director Mike McFarland hosts voice actors Ian Sinclair (Tatsumi), J. Michael Tatum (Seishiro), and Lydia MacKay (Chizuru) in the booth for a nice informal chat about the show, and their characters, and answer a couple of vampiric hypotheticals. 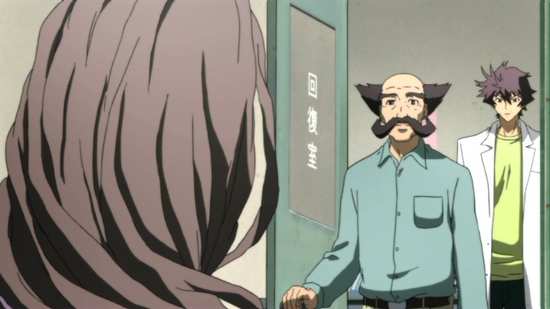 Disc 4 starts with a trailer for Fullmetal Alchemist: The Sacred Star of Milos, and you’ll also find further trailers in the extras menu, SD trailers for Chrome Shelled Regios, Hell Girl, Mongolian Chop Squad, and Corpse Princess, and HD trailers for The Legend of the Legendary Heroes, Fractale, and Tales of Vesperia.

You get the second set of textless credits, and this time the subtitles are optional. 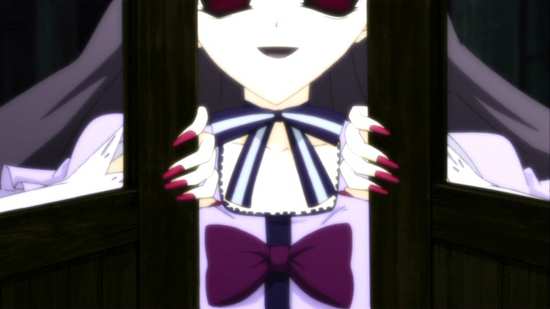 The audio commentary here gathers Mike McFarland, Cherami Leigh (Sunako), John Burgmeier (Seishin), and David Wald (Toshio) to comment on the final episode. Again it’s a nice informal but interesting and relevant chat, as all the commentaries for Shiki have been, a welcome change from the usual Funimation free-for-alls.

You also get five more Preview Featurettes running to a total of 6:43, and unlike the first set, these aren’t on the UK Manga release.

Finally there is the US trailer for Shiki. 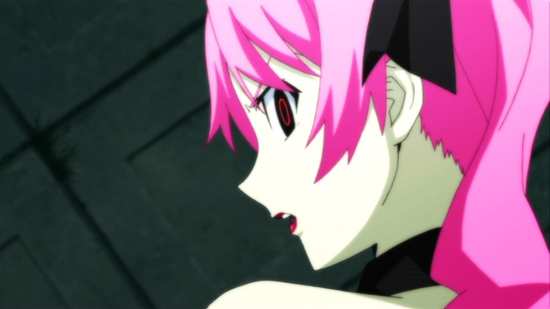 I can guess why Shiki fell flat enough on first release for its Limited Editions to be cleared out on the S.A.V.E. budget line. This is most certainly not a show to be released in two parts. You really do need to see it as a whole. I can wholly believe that whoever bought Part 1 of Shiki watched it, and put it to one side, feeling underwhelmed, and maybe put off by the character designs, thinking that they might pick up Part 2 on sale, complete the series if they had nothing better to do. They then forgot about it, and so Funimation’s expectations for the show failed to be met. 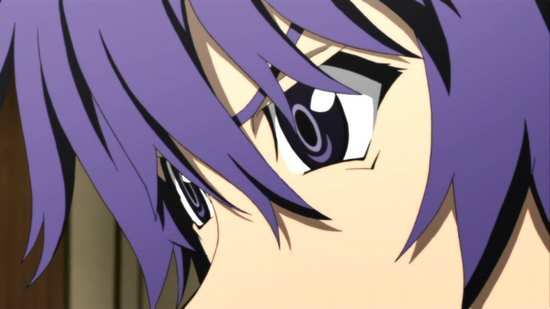 The thing about Shiki is that it really is one piece. It’s a story told in 24 chapters, and the understated and somewhat comically flat opening to the show is deliberately so. It builds on that opening, slowly adds more and more of interest, just enough to make you want to watch the next episode, but not to the point of fannish obsession. It’s a show that gradually gets better and better, and even by the halfway point, it might not have hooked an audience. If you have the whole thing, you’ll keep watching on momentum, but you won’t be compelled to buy part 2. In part 2, it continues on that gradual build, getting better and better, more and more interesting. That’s until episode 18, where someone flicks a switch, and Shiki becomes the best thing ever, and it stays that way right until the final episode. 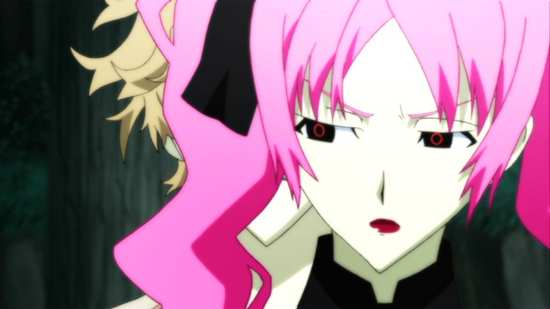 Of course I’ve said this before in my reviews of the DVD release, how a fun, but forgettable vampire show transforms into an un-missable look at the dark side of human nature, and that’s no less true in its Blu-ray incarnation. The real question is whether the double dip is worth it? When the double dip is at S.A.V.E. prices it’s more a question of what’s stopping you? The visual benefits of Blu-ray really do become apparent in bringing across Shiki’s rich colour palette, and off-kilter character designs, while the lack of compression, and higher detail is certainly appreciated. Funimation never quite make the most of their HD releases the way that companies like NIS and Aniplex do, but the image quality is still very strong, marred only by the usual banding issues. Audio too is better given the lossless treatment, and you also get the show in the native frame rate, so no PAL speed up or pitch correction. 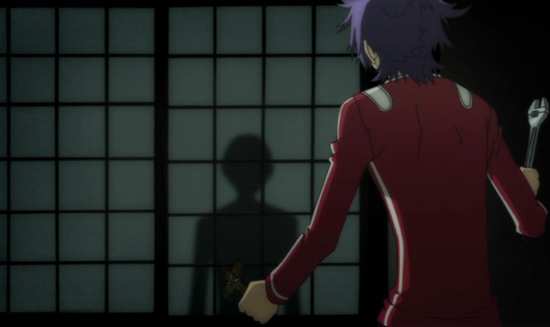 There’s also the benefit of avoiding the few authoring goofs and omissions the Siren sourced Manga release had, the mistimed subtitles in episode 1, the audio glitch in volume 2, and the missing Preview featurettes in that volume as well. But remember that with Shiki, you really are buying one story, not just 24 episodes.