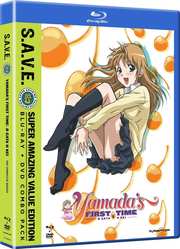 In Japan, this show is called B Gata H Kei, which according to Wikipedia translates as Type: B; Style: H, and which doesn’t really shed a lot of light on the story. The title Funimation market it with is Yamada’s First Time, which is a lot more elucidating. It’s about sex. Sex, which the law tells us doesn’t exist under the age of sixteen, but in reality occupies the minds of those just past puberty for 90% of their waking lives. What is it? How do I do it? How do I get it? I want it! Now that I have it, what do I do with it? Am I doing it right? Is it supposed to look like that? That’s disgusting! God! I got to wash the sheets again! It’s a wonder the average teenager isn’t a total neurotic mess... oh wait. 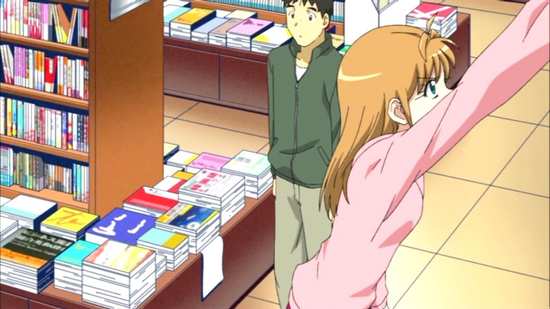 Teenagers can get some really funny ideas about sex, influenced in wholly unrealistic and far-fetched ways by what they see around them, what they can find online. Take Yamada for instance. She’s certainly stressed by her growing sexual awareness, but has decided that experience will solve all. The more she does it, the more comfortable she’ll be with her sexuality, and the easier it will be for her to eventually fall in love with ‘the one’ if she knows where everything goes, how everything works beforehand. She’s set herself the goal of having a hundred partners. But it’s number one that’s proving hard. She doesn’t have the experience to feel confident doing it with someone else who is experienced. The last thing she needs is to be laughed at. So for her first one, she needs a total cherry boy who’s even less experienced than her. She chooses classmate Takashi Kosuda. But making her intentions clear to him is proving nigh on impossible. Forget 100 sex friends, she can’t even get just one! 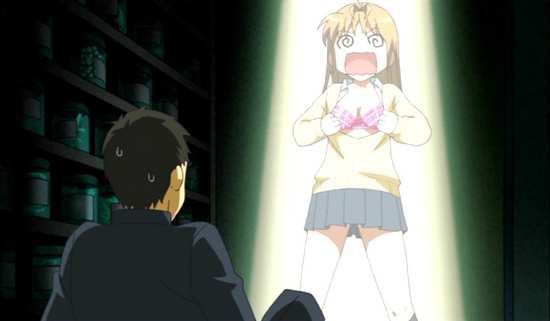 Twelve episodes of Yamada’s First Time are presented across 2 Blu-ray discs, and repeated on 2 DVDs in this S.A.V.E. Collection from Funimation. I’m reviewing the Blu-ray component of this release, which is Region AB compatible.

Disc 1
1. Boy meets girl. Let me have your “first time!” Big gambit after school! Why don’t we start with a kiss?
2. Oh yeah! Let’s go to a pool! You wanna see me in a swimsuit, right?! Here comes the rival! Who’s that F-cup girl?!
3. Suddenly so close in the darkroom! Kinda dangerous club activities?! Passionate school festival! I, Yamada will be the school’s queen!
4. Romantic Christmas Eve! What does the first kiss taste like? I can’t go back empty handed! Let’s go to the makeout park!
5. Yamada’s level increased! She learned how to deep kiss! Work on your naughty power! I’ve never felt a sensation like this before...
6. Kanejo is coming! I can’t stand that sparkle! Behind that rosy smile is... Kanejo’s dark secret!
7. Major deal in school swimsuits! I’m not going to lose against you! Memories of a summer’s day... Yamada returns to the wild!
8. Yay! It’s a school trip! No chance to be alone... I have to tell you that I l... The trip causes a great fuss! 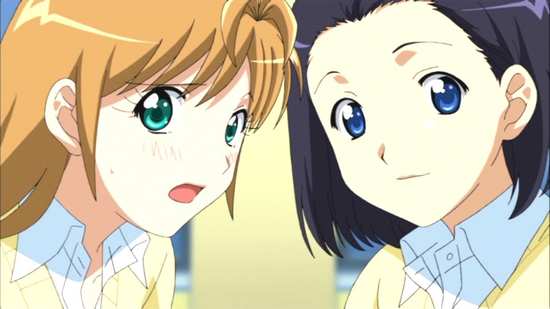 Disc 2
9. Oh no! In front of everyone... I never said I don’t like you... Autumn. Put your hopes in Field Day! Suit yourself... Autumn.
10. The Kanejo Family! Richy brother’s sparkling secret! On my way to love? Don’t hit on my Kosuda!
11. Year 2 Class H’s Christmas Eve! Take me to Bed! Kanejo is watching?! A “live” broadcast that pushes the limits!
12. The world revolves for us! Goodbye... B Gata H Kei! Yamada turns into an angel! Farewell B Gata H Kei!

Yes, those really are the episode titles. They seem less like titles and more like episode summaries to me! 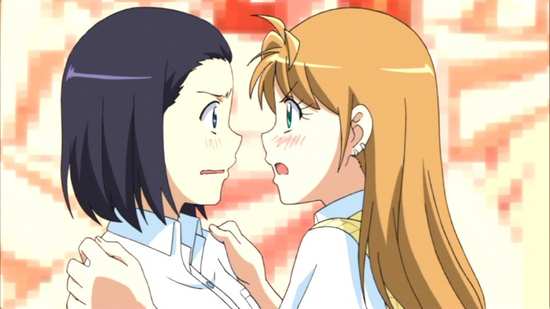 Yamada’s First Time gets a 1.78:1 widescreen transfer at 1080p. It’s a simple, but effective animation, with bold, primary colours, and fairly generic character designs well-suited to conveying the show’s ribald humour. Consequently, the image on this transfer is clear and sharp throughout, with no signs of aliasing, compression, or even digital banding. If there is an issue, it’s with a few frames of jerkiness appearing at certain scene transitions, although that might just be a problem of compatibility with my player. Also, you shouldn’t be shocked at the prevalence of fan service in the show, it is about sex after all, but as it’s a broadcast anime, there’s nothing too explicit to offend sensibilities.

The images used in this review are sourced from the DVD component of this release, and aren’t representative of the HD presentation. 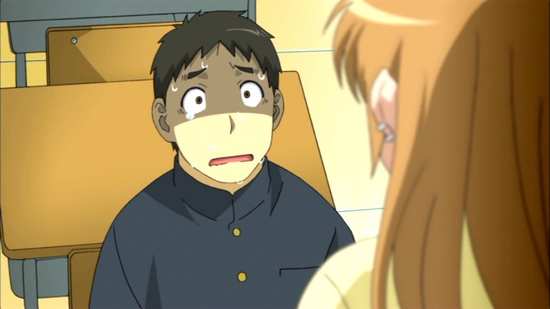 Yamada’s first time gets Dolby True HD 5.1 English and Dolby True HD 2.0 Stereo Japanese with optional translated English subtitles and a signs only track. As usual, I went with, and was very happy with the original Japanese audio, even if the volume level was a tad low. The dialogue is clear throughout, and the stereo is enough for what is at heart a comedy show. If I had a nit to pick, it’s while the subtitles may be accurately timed and free of typos, they are in a thin white font that means they often are hard to read against busy backgrounds. I tried the English dub, and it’s a typical Funimation comedy dub, with actors who sound like they’re in their thirties, rather than the teenagers they are portraying. The surround may offer a bit more space, but it’s not exactly warranted here, and the real issue is an overly localised dub script, with an overabundance of US colloquialisms that flew over my head. 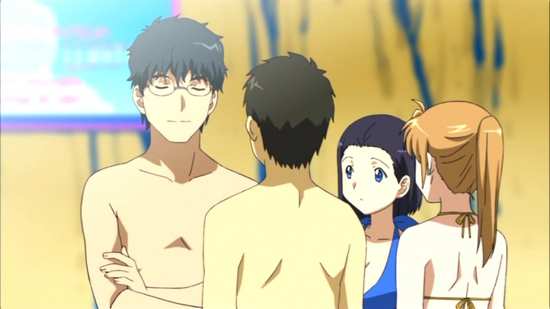 You have 4 discs in an Amaray style case, with two discs held either side of two hinged panels. The S.A.V.E. sleeve is blessedly reversible, probably the first thing you’ll do. The disc content is repeated on the DVDs, which have 1.78:1 anamorphic NTSC presentation with DD 5.1 English, DD 2.0 Japanese, and English subs and signs. Both of the Blu-ray discs present their content with animated menus, heavy on the cherries. 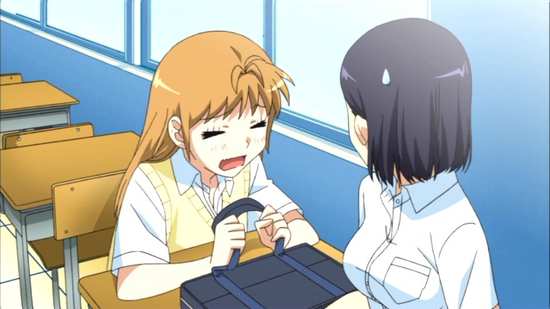 Disc 1 autoplays with a trailer for Sekirei: Pure Engagement.

The only extra on this disc is the commentary on episode 1, with ADR Director Zach Bolton with Brittney Karbowski (Yamada), and Scott Freeman (Kosuda). Given the tone of the series, it’s no surprise that this is the usual Funimation gigglefest, although it’s more appropriate to call it a Sid-James-laugh-fest; the commentary with Tourettes.

Disc 2 autoplays with a trailer for Strike Witches Season 2.

On the disc you’ll find the textless credit sequences, with optional translated lyrics. 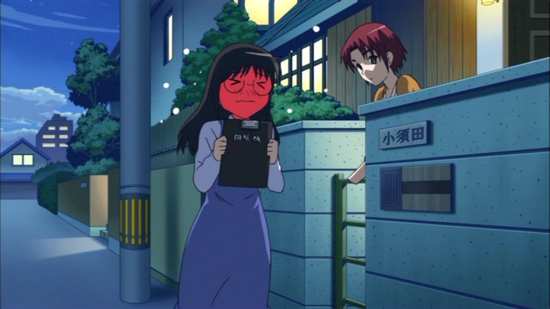 You also get 2:54 of Outtakes, once again making me wonder if these things have ever been funny...

Finally there is the episode 11 commentary with writers Jamie Marchi and Leah Clark, so you know who to blame. 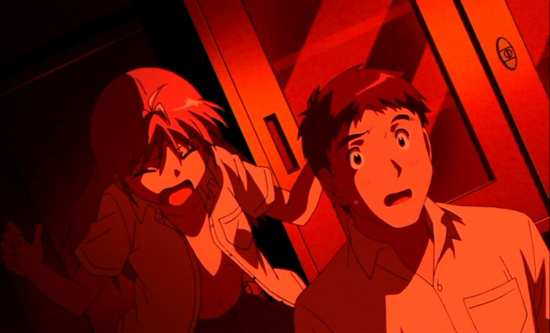 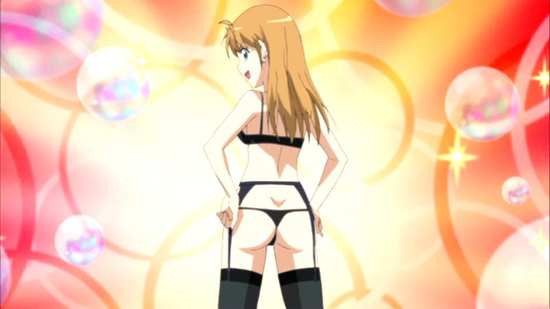 This is the world we live in today, and this is the world that has resulted in Yamada, a high school girl obsessed with sex, who clearly knows what it is, and has decided that she’s going to get it. What’s more, she doesn’t want anyone to realise how inexperienced she is, so she picks another virgin as her first conquest. But the reality is that while she may be straight-talking to the point of sounding like a lecherous pervert, her desire to lose her virginity clashes with her innate nervousness and fear about sex. She hasn’t really thought through what it entails, and her confidence keeps on clashing with her fear. Her first attempt to ‘seduce’ Kosuda involves cornering him in a school cupboard, pushing him to the floor, pulling open her blouse and exposing her bra at him with a roar and a grimace on her face, before realising what she is doing and screaming in embarrassment and running off. 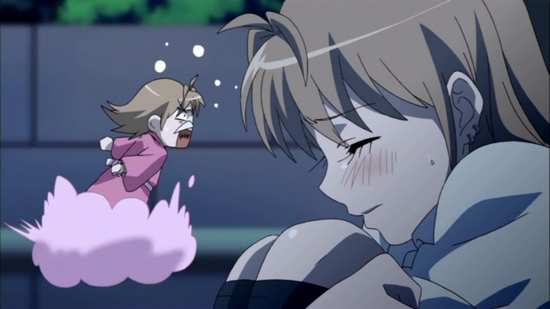 And so begins Yamada and Kosuda’s relationship, definitely not boyfriend and girlfriend, but slowly edging towards having sex through inadvertently doing all that boyfriend and girlfriend stuff, like talking, getting to know each other, dating and so on. They’re watched over in this endeavour by their respective Eros Deities, little mascot characters who support them, and comment on their successes and failures. Yamada’s Eros Deity is a moustachioed version of herself atop a cloud, while Kosuda’s is himself in traditional Japanese dress, but patently a representation of his penis (and later on serves as useful broadcast censorship). The most important thing, and the message that the series ultimately has to impart, is that in her course towards losing her virginity and having sex, Yamada learns that it’s not just a mechanical act to achieve, that the other person involved matters, and that you can’t have sex without feelings, without emotions, and indeed that’s the whole point. It’s about as positive a message as you can expect from what is a sex comedy. 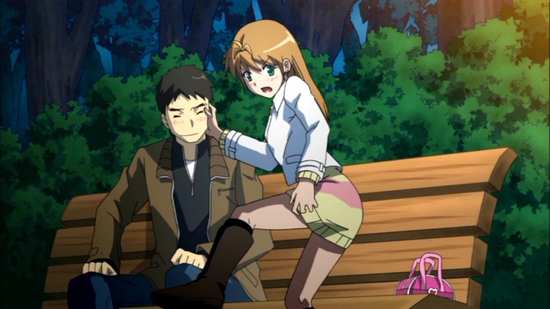 Of course Yamada and Kosuda don’t exist in a vacuum. Yamada’s best friend, confidante, and source of advice is Takeshita, who at least is level-headed, and in a relationship. Even Yamada’s kid sister Chika has her head screwed on straight in comparison. Kosuda has an older sister who he can turn to for advice, while family friend Mayu Miyano has had a crush on him since childhood, of which he’s hopelessly unaware. There’s a classroom of characters always ready with a comment or observation, and halfway through the series a student named Kyoka Kanejo transfers in who instantly becomes Yamada’s rival as queen of the school. Kyoka’s more suited to the position anyway, what with her wealth and her aristocratic airs, but Yamada has the popularity. Kyoka decides to find out who Yamada’s boyfriend is, and steal him and then dump him, as high school queen rivals do. But Kyoka has her own issues as well. 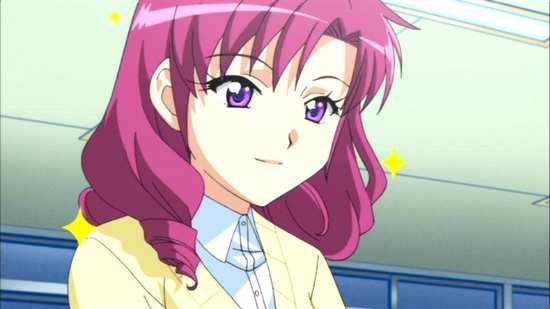 For while Yamada wants to take Kosuda’s virginity, and say farewell to her own in the process, Kyoka too wants to lose her virginity... to her brother. Thank God her brother is unaware of this, and when Keichi does appear, he sets his eyes on Yamada, becoming Kosuda’s rival in the process, but seriously Japan; this sibling incest crap in anime has to stop. It’s the one weak point in the show, but fortunately it’s just a creepy sideshow, and doesn’t drag the main storyline down. Apparently it’s funny to see a girl lust hopelessly after her brother to the point where she builds a secret shrine to him in her mansion. Another odd point that I noticed in the extras is the episode 1 commentary, where Yamada’s dub actress begins by labelling the character a skank. Which makes me think that they missed the whole point of the series. 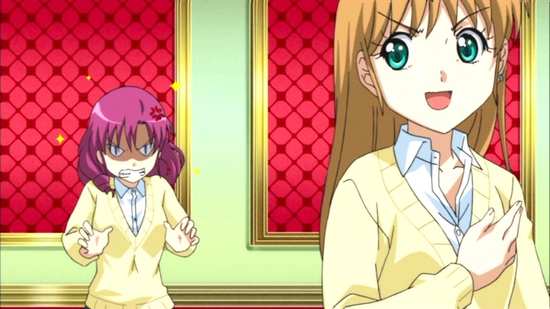 If you can watch the show with a creepiness filter in place to block out the worst of Kyoka Kanejo, then Yamada’s First Time really is a likeable, saucy, ribald, and ultimately heart-warming comedy in the vein of American Pie, albeit seen from a female perspective, which makes a welcome change. Yamada and Kosuda’s developing, if unconventional relationship is fun to watch, as they edge inexorably closer to their respective first times, although you’ll have to watch the show to see if that moment of consummation arrives. That said, fair warning that the final episode of the series is apparently one of those straight to DVD affairs in Japan that wouldn’t make it past the broadcast censors.