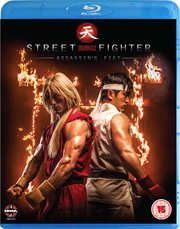 I’ve noticed in recent years that movies, TV, and especially anime adapted from videogames are getting, if not exactly good, at least watchable. That’s probably less down to film-makers finally getting it, than it is the nature of videogames actually changing. Today’s games want to be interactive movies, they have scripts, cast big Hollywood names in key roles, and spend more money on cut-scenes than they do actually sorting out game physics. When I see Kevin Spacey’s digitised chops advertising the latest Call of Duty it becomes clear that the line between Hollywood and games just doesn’t exist anymore. That wasn’t always the case though. When games used to consist of a few pixels and sprites on a screen, where the ‘plot’ of a game amounted to shooting, hitting, or eating, chasing, or jumping on things, there wasn’t a lot that Hollywood could do, other than fill in the blanks to such a degree that the end product barely resembled the original game. Super Mario Bros and Jean Claude Van Damme’s Street Fighter Movie are cases in point. The games just didn’t have enough story to warrant a feature film adaptation.

At least that’s what I always thought. It becomes clear at this point that I’m not a Street Fighter aficionado, and my interest in the game, and the characters within waned rapidly once I tried playing it, and got my butt repeatedly kicked. It turns out that the Street Fighter franchise has an extensive back-story, and it also has a narrative running through the games. Wandering over to the Street Fighter wiki and taking a look at the character biographies certainly reveals enough in the way of story details to allow for dramatisation.

That’s where Joey Ansah comes in. He’s an actor (The Bourne Ultimatum), stuntman, martial artist, and Street Fighter fan, and he’s been determined to give the game the live action adaptation it deserves. In 2010, he wrote, produced, directed and appeared in a Youtube short, Street Fighter Legacy that served as a proof of concept, and which also garnered several million views. That lay the groundwork for this Street Fighter Assassin’s Fist 13-episode online series, which has been reedited here into a 2 and a half hour feature film.

Assassin’s Fist takes us back to the beginning, to Japan in 1987, when Ken and Ryu were students of Master Goken, learning the art of Ansatsuken, Assassin’s Fist. As the name implies, it’s a martial arts technique with just one intent, but Goken believes that he has discovered the way to balance light and dark, and to teach his students how to master Hado without becoming corrupted in the process. But for young, firebrand martial artists, patience is a virtue that is often lacking. Master Goken may be making a fatal mistake in trying to pass on his knowledge, as he is yet to come to terms with his own past. Back when he and his brother Goki were themselves students of the Assassin’s Fist under Master Gotetsu, Goki became impatient with Gotetsu’s teachings, and resolved to attain strength and power by any means necessary. Just the way that Goki was corrupted by the dark path, it looks as if history is repeating itself, and either Ken or Ryu might wind up corrupted by evil.

Street Fighter Assassin’s Fist gets a 2.35:1 widescreen transfer on this Blu-ray at 1080p resolution. The image is clear and sharp throughout, with nice detail, and strong, consistent colours. Odd moments of jerkiness in the digital cinematography do occur, but very rarely, and that’s probably down to the source material. The film is shot on location with Bulgaria doubling for Japan, and you’d be hard pressed to tell the difference. It looks fantastic, and you can see every penny of production design and location verisimilitude on screen. It’s a film that visually exceeds its budget, especially when it comes to the fight choreography, and special effects.

Audio is a little more disappointing, available only as a single PCM 2.0 Stereo English and Japanese track. The subtitles are player forced, and translate the Japanese dialogue, of which there is a lot. One problem might be a few impenetrable accents when it comes to the English dialogue, and optional subtitles at these points would have been nice. Otherwise, the dialogue is clear, the action comes across with a nice level of impact, and the film’s music really suits the story well.

You get a nice selection of extras, presented on this disc with an animated menu.

The Director’s Commentary from Joey Ansah is well worth listening to, as you can hear the passion the director has for his subject, and there’s plenty of useful information to be gleaned. It’s a little gappy though, and it was very obviously recorded for the episodic series, not the movie, and has a bit of a patchwork feel to it.

Ken’s Video Diary is a bit of in-character silliness. Three glimpses of life at the dojo thanks to Ken’s camcorder last just over 3 minutes and are presented in 1080i, but of faux-VHS quality.

There are four deleted and extended scenes running to a total of 11 minutes and presented in 1080p.

There are 9 interviews with the Cast and Crew in the Making Of... section, running to 14 minutes and which are presented in 1080i.

There are 5½ minutes of Outtakes in 1080p, and the Trailer as well.

It’s apparent from the off that this is a labour of love. The actors are well cast for their roles, and give strong performances, the action sequences are enjoyable to watch, and while it might have been a risk to have most of the dialogue in Japanese, potentially alienating the audience, it pays off here in terms of realism and atmosphere. Street Fighter Assassin’s Fist is very well made, and an impressive achievement. It’s also wholly unsatisfying and really quite dull to watch. It’s overlong and poorly edited, and the viewing experience feels like a chore.

The main problem is that it’s put together from a series of shorts, little 15 minute episodes that deliver short sharp hits of narrative and a bit of action. It seems that this movie merely just sticks those episodes together, and the end result is disjointed and lacks structure. It needed to be edited more aggressively, cutting out the superfluous, and finding the important narrative arcs. This is a story that would have worked a lot better at 90 minutes. There are main stories going on here, Ken and Ryu in the ‘present day’, and Goken and Goki thirty years previously. Ken and Ryu carry the action stakes in the film, while it’s Goken and Goki who deliver on the drama. The narrative switches between the two quite haphazardly, and halfway through, we get a flashback that lasts the better part of an hour, setting up the main dramatic antagonism between Goken and Goki.

It almost makes you stop caring about Ryu and Ken, by which time when it switches back to the present day, and the film’s climactic action sequence, there’s no emotional investment left in it. By this point you want to see more of the story between Goken and Goki play out, and it does, at which point the film ends on a cliff-hanger, one which isn’t in any way resolved or alleviated by the post-credits sequence. In the end, despite all the narrative that unfolds in the film, the Street Fighter lore that is explored, Assassin’s Fist feels like the prologue to a story, not a story in itself.

Street Fighter Assassin’s Fist will be best appreciated by Street Fighter fans, and patient ones at that. Anyone else would be advised to give this film a miss.