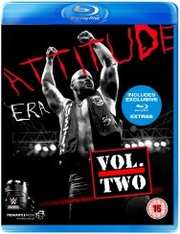 The Attitude Era Volume 2 is exactly what a Volume 2 should be. It is a set that doesn't just retread the same material as the previous set and actually if you have that first set (which you should do) is a great accompaniment. The set is a mix of vignettes, matches and moments from the Attitude era all are wonderful to relive. Throughout there are comments from those who were there including the likes of Edge, Sunny, Billy Gunn, Jerry Lawler, X-Pac, Mark Henry, Ron Simmons, The Godfather, which are all stories that are nice to hear.

There is a look at the Brood and the Bloodbath is hilarious with Edge is explaining how they did it and also how much people hated having it done to them. Rock tells a funny story about how 'wild' he and Triple H were... or not. Jericho describes his original debut which was one of the best entrances of a wrestler of all time. Though why would they include the Evening Gown Match between Gerald Brisco and Pat Paterson? This is a match which is generally considered one of the worst matches of all time. Sure, make fun of it in a short vignette... but don't make me relive this horror again!

The Divas do feature heavily including a look at the Bikini competition from 1997's Slammys (They need to bring that back!) which looks amazingly hot. Also includes the infamous Sable body paint bikini contest which is one of the sexiest moments ever. Lita also looks amazing in a classic match with her teaming with The Rock against Kurt Angle and Stephanie McMahon. It is always great to see Trish Stratus in a tag match with her and Triple H (Though they don't include the hilarious backstage segments of Triple H teaching her some moves) against Lita and The Rock is once again an amazing match.

The Undertaker vs. The Rock in a casket match is almost PPV quality and includes a gruesome use of the sledgehammer by Triple H. Kane and X-Pac vs. The Acolytes is a great tag match and it was always wonderful to see the 'human' side of Kane and the effective brutality of Ron Simmons and JBL. Eddie Guerrero in his Latino Heat gimmick against Dean Malenko is a classic cruiserweight-style match and certainly two people who work so smooth together.

WWE Championship match between Owen Hart vs. Shawn Michaels is an amazing match as you could expect from both of them. New Aged Outlaws vs. Cactus Jack and Chainsaw Charlie (or Mick Foley and Terry Funk) is as insane as you would expect from these two teams. Intercontinental Championship match between The Rock and Ken Shamrock is a great early match from The Great One and includes a great early Rock promo and it is so shocking to see him here and how much he has changed.

McMahon and Stone Cold are featured throughout and includes the infamous Mr McMahon against Stone Cold in their WWE Championship match 'WITH ONE ARM TIED BEHIND YOUR BACK!!!' The build is just amazing to this match and the payoff even more so. Triple Threat Match between Mankind, Kane and The Undertaker which is a great match that wasn't, made even better by the back and forth commentary between Stone Cold and Mr McMahon.

Legion of Doom and Owen Hart vs. Triple H and the New Aged Outlaws is one of the best on the set. Yes, this is to be expected because I get to watch The Roadwarriors and also see Sunny in her amazing outfit. This wasn't the classic team from the 1980s and the early 1990s, but still a great match. Six Man Elimination Match featuring Marc Mero, Droz, DLo Brown, Gangrel, Jeff Jarrett and someone called Edge. It is great to see Droz before the sad accident that crippled him and this is a pretty good match by a lot of young talent.

Triple H vs. Edge is a wonderful early match for Edge and this is the best example of why WWE won the war against WCW. Here was a match with two up and coming stars and both made each other look amazing. This is exactly what needed to happen. The infamous Val Venis 'Choppy Choppy Your Pee Pee' moment is shown in full, including a great match with Kaiteni is certainly a memorable moment and will make every man wince from watching. DX going around New York promoting Summerslam is fun, despite some of the Un-PC moments.

For the Blu-ray there are a number of extra pieces that are well worth the look. These include Paul Bearer and Kane with The Undertaker's parents' caskets. This is gruesome, but awesome at the same time. Kane and Mankind vs. The Rock and Owen Hart is a great little match, nothing too special, but a nice match from all involved. The Rock against Stone Cold in a Lumberjack match shows just why these two were so popular and had such amazing chemistry together.

Also included is Mr McMahon against Triple H for the WWE Championship. Unlike the match against Stone Cold, this is a brutal match with an oddly satisfying ending with a little help from a Texas Rattlesnake. The creation of the APA is nice, but this should have been given its own vignette as they had some great moments (including the memorable strip poker with Trish segments).

Triple H vs. Chris Jericho in a Last Man Standing match shows just how great these two were in making each other look better and whenever people say Triple H buried talent this is proof of just how good he was at making talent too.

The Attitude Era Volume 2 is a great accompaniment to the original set. If you have that and enjoyed it, then you will love this one. There is a wealth of matches and moments that I enjoyed reliving and though I could live without ever seeing Paterson and Brisco in evening gowns again, if you haven't seen it it is a sight to behold. If you lived through the Attitude era then this is a great trip down memory lane, if you didn't then you will enjoy catching up on arguably the hottest period in the business.