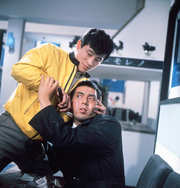 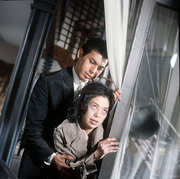 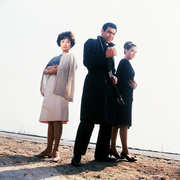 Youth of the Beast 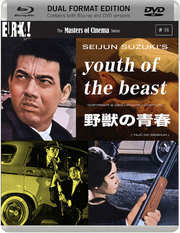 Synopsis:
Right on the heels of the riotous Go to Hell, Bastards: Detective Bureau 2 3, Seijun Suzuki unleashed what would come to be seen as his true breakthrough, the film that would cement "the Suzuki sensibility": Youth of the Beast [i]Yajû no seishun]. A kaleidoscopic fantasia that contains "youth" and "beast" only insofar as 1963 pop/youth culture was that violently upstart thing, — not unlike the yakuza?

And so Youth of the Beast is a yakuza tale with a premise like Akira Kurosawa's Yôjinbô, but denuded of an easy definition of which side is which. It stars Suzuki's iconic '60s regular Jô Shishido, with his dare-you-to-call-them-out artificial cheek implants like new acting blasphemy. There are drug-addled whores, gunfights in a new colour apocalypse, and at least one alien landscape: the sudden mind-searing eruption of a sulphur yellow desert like an action-figure playset with overspill of unbridled lust...

Suzuki's infectious go-for-broke energy is assisted by a telephoto lens that serves at once as phallus and yoni in the masterful, Minnelli-worthy 'Scope framing. His film would go on to inspire John Woo's forthcoming remake titled Day of the Beast; Nikkatsu have in recent times deemed this movie one of their treasures. The Masters of Cinema Series is proud to present Youth of the Beast in a Dual Format (Blu-ray + DVD) edition based on their new HD master.