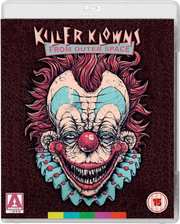 ‘Killer Klowns from Outer Space’ is a film that’s sole intent was to be a fun, knowing sideways glance at trashy b-movies. Raised on a steady diet of b-movie trash as kids of the late 50’s and 60’s, the Chiodo brothers were born to create their own. (If you’re in any doubt, watch the incredible home-made stop-motion mixed with live-action movie they put together as kids!).

Having helped out (with special effects and animatronics mainly) on countless horror and sci-fi films in the seventies and early-eighties, they finally managed to round up a horribly modest budget of their own, reel in countless favours, and turn out ‘Killer Klowns in Outer Space’. For that, we should be extremely grateful. In common with ‘not quite right but go along with it’ b-movies like ‘Basket Case’ , ‘Ghoulies’, ‘Critters’ and ‘Troll’, you have to suspend all disbelief, crack open a beer and some popcorn and go along for the ride.

When Mike and his girlfriend Debbie turn up at the local police station warning that a gang of homicidal alien clowns have arrived in the town of Crescent Grove, the cops are naturally sceptical. Talk of popcorn-firing guns and a spaceship shaped like a circus tent out in the woods hardly helps to convince them. Before long, however, reports start coming in from anxious locals reporting similar run-ins with the colourfully-dressed, large shoe-wearing assailants. There can no longer be any doubt – the Killer Klowns from Outer Space are here and they’re out to turn the population into candy floss!

This remains the sole directorial effort from the Chiodo brothers – the special effects team behind such hits as Critters and Team America: World Police – KKOS was released in 1988 to modest reviews and acclaim. Since that time, partly due its popularity as a rental VHS and then DVD, its reputation has built and it has become, like many before it, a kind of cult classic. To me that’s ironic, as it sort of set out to parody movies that more naturally and less knowingly earned such esteem.

I’ve seen the film once already (I think maybe on Netflix) and enjoyed it far more than I thought I would. Watching it a second time on this superb Blu-Ray release from Arrow, I enjoyed it even more. It’s just simple, non-demanding, slightly quirky, often funny entertainment which thankfully delivers the goods in less than 90 minutes – perfect late night Friday viewing.

The film is full of wooden delivery of wooden dialogue (as it should be of course) and littered with wacky death scenes which all have circus theme. Clowns are often seen as slightly sinister and here we even see McDonalds parodied for their consistent use of Ronald McDonald in a scene where an evil ‘Klown’ attempts to lure a young girl away from her Happy Meal. Priceless stuff!

The whole package from Arrow is as you would expect from an organisation who have seriously raised the bar with great transfers, superb reversible artwork and masses of extra features.

Picture quality is probably as good as it’s going to get although this low-budget affair isn’t going to be the greatest high-definition disc of all time or anything close. But it’s nice that it gets the respect it deserves.

I haven’t seen the final packaging for this set yet but I imagine it will be excellent – especially the limited edition steel-book which I imagine will sell like hot-cakes.

The special features include interviews, bloopers and a Chiodo Brothers commentary for the film that provides plenty of trivia to keep film fans happy. As always it’s nice that Arrow Video have taken the time to pull together so much material about the film, and release it in a steelbook, showing the love for the release that it fully deserves.

Audio Commentary with the Chiodo Brothers – all three thoroughly enjoy themselves throughout the movie and it makes for an entertaining and informative 85 minutes.

The Making of Killer Klowns – a 20-minute featurette looking at the film’s production, including an interview with the Chiodo Brothers alongside behind-the-scenes footage. This was originally filmed about ten years ago for a DVD release.

Visual Effects with Gene Warren Jr. – an interview with Charles Chiodo and visual effects supervisor Gene Warren Jr.
Kreating Klowns – an interview with Charles Chiodo and creature fabricator Dwight Roberts
Bringing Life to These Things – A Tour of Chiodo Bros. Productions filmed this year. It looks a great place to work with a vertable treasure-trove of props, puppets and masks that any self-respecting anorak would love to get their hands on.

Chiodo Brothers’ Earliest Films – a look back at the Chiodo Brothers’ early homemade productions. A very impressive piece mixing stop-frame with live-action and even using some reconstrcutions of their own house in miniature to create the illusion of the monster breaking through the doorway. Utterly brilliant use of perspective to make the monster look huge when exposed with live action. Very clever young men who went on to become even cleverer older men.

All in all, a really superb release which gets the Rolls-Royce treatment from Arrow. If trashy, funny b-movie films are your bag then this should be considered an absolutely essential purchase.